Radial artery versus saphenous vein to myocardial revascularization: meta-analysis (there is no statistically significant difference)

Objective: To compare the effectiveness of radial artery graft with saphenous vein graft to myocardial revascularization, in association with the internal thoracic artery. Methods: We made a systematic review of literature, using a strategy to search articles applied to MEDLINE and LILACS databases. Two independent researchers have carried through the election of identified articles, evaluating carefully the methodology of articles considered excellent for the subject. Only the randomized controlled trials, with adjusted randomization system have been enclosed. All the situations where the researchers didn't agree there was a consensus meeting. It hasn't been stipulated restriction for postoperative period to graft angiographic evaluation, the vessel treated and enclosed patient's characteristics. The results have been expressed as Risk Relative (RR), with 95% of Confidence Interval (CI), to comparison the effectiveness between the radial artery and the saphenous vein. Results: Based in these criteria three studies have been enclosed. We couldn't find statistic difference between grafts' patency studied (RR 0.53 [95% IC 0.13 - 2.18]). Conclusion: Despite of the studies have good methodological quality, we have not observed a result significant statistically benefiting one of the grafts. The statistical power of the meta-analysis is low, therefore, it's necessary more randomized controlled trials, with adjusted sample size to detect possible differences between the considered treatments.

Coronary artery disease (CAD) is the main cause of death in practically all countries around the world in spite of the advances in clinical and surgical cardiology [1].

Coronary artery bypass grafting (CABG) is a well-established procedure used to treat advanced CAD. Although the results of this operation are excellent [2,3], long-term benefits are influenced by the type of graft used. It is well known that saphenous vein (SV) grafts, although they are widely employed, have an unsatisfactory perviability over the long-term. Around 15% of SV grafts occlude within the first postoperative year [4], and only 50 to 60% of the grafts are patent over ten years of the postoperative period [5,6].

Thus, the use of the internal thoracic artery (ITA) is, without doubt, one of the most important advances in the treatment of CAD over the last 25 years. These arteries are associated with a better long-term angiographic perviability when compared to SV grafts, promoting a significant reduction in mortality [7-10]. In view of these results, the use of the ITA became the gold standard for CABG, with the SV utilized as complementary grafts for complete revascularization.

On the other hand, the better results of arterial grafting encouraged surgeons to explore other arteries to complement the ITA aiming at substituting the SV grafts. Thus the gastroepiploic artery [11-13], the inferior epigastric artery [14] and the radial artery (RA) were investigated.

Of these, the RA is currently the most commonly used. Initially described in 1973 by Carpentier et al. [15], the use of the RA was abandoned soon after due to its susceptibility to spasms and functional occlusion [16,27]. However, with the advent of drugs that prevent spasms and the adoption of better dissection techniques, interest for the RA as an additional arterial conduit was revitalized in the 1990s [18].

A recent observational study by Khot et al. [28] in 2004, showed a reduction in the perviability of RA grafts when compared to ITA and SV grafts. Despite of being a study with a low level of significance, with high potential of bias in the selection and follow-up, there was a stir in the credibility of surgeons who used RA grafts. Thus we decided to perform a scientific metanalytic review of publications to assess the effectiveness of the RA graft in CABG comparing its patency with SV grafts when used in association with the ITA graft.

Inclusion criteria in the review study

Controlled and randomized or quasi-randomized clinical trials that compared the perviability of RA and SV grafts in association with ITA grafts were included. Double-blind studies are not possible in this type of intervention however, masking was assessed, but was not considered as a decisive requisite for inclusion of studies.

Coronary disease patients, independently of age or ethnic group who required CABG due to obstruction greater than 70% in any coronary artery were included. The necessity of revascularization was considered from clinical, laboratorial, electrocardiographic and coronarographic signs and symptoms of the patient.

The perviability of RA and SV grafts was evaluated. The number of grafts that each patient was submitted to was considered rather than the number of patients.

Occlusion of the vessel at 1 year and 5 years after the surgical procedure.

The electronic databases of MEDLINE via PubMed and LILACS via the Virtual Health Library were accessed up to September 2005. The search strategy utilized was formulated using key words relative to the review theme grouped in a way to filter all the articles. The authors chose a highly sensitive filtering strategy and restrictions in respect to the publication language were not used thereby diminishing publication bias.

Two independent researchers selected the trials for inclusion or exclusion after analyzing the titles and abstracts of the studies identified using the search strategies. The selected trials were compared and any discrepancy was solved by discussion and consensus. Subsequently, the trials included were independently evaluated by the two researchers to ensure that they obeyed the stipulated inclusion criteria. Finally, the articles selected for review were checked to prevent the inclusion of duplicated data.

The data of the studies were independently extracted by two researchers using a standard form. The forms were set up based on data previously defined as relative to the theme. When necessary, the authors of the primary studies were contacted to add information or data in the results of their studies.

Methodological quality of the included studies

After extracting all the data relative to the studies, evaluating their quality, they were plotted in the Review Manager - RevMan 4.2.8 program - for analysis. Comparisons of the effects between the two interventions of interest were expressed as Relative Risk (RR) with a 95% confidence interval (CI).

A total of 398 articles were selected from the MEDLINE and LILACS databases. Of these, only three corresponded to the inclusion criteria of study type, that is, they were controlled and randomized or quasi-randomized clinical trials.

The metanalysis of the studies, involved 116 grafts up to the cutoff date of this systematic review is presented as an analysis of subgroups in respect to the evaluation of the patency of the grafts at 12 months and five years. The results of the subgroup and overall metanalysis are presented in a random model (Figure 1). 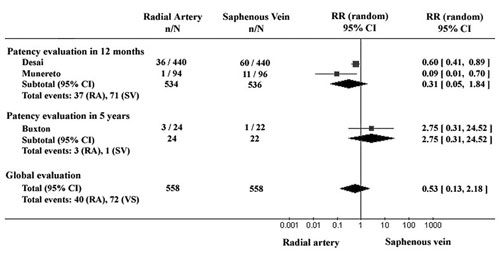 Fig. 1 - Subgroup and overall metanalysis. For 12-month patency and 5-year patency there are no statistical significances between groups. The estimation of the overall effect does not demonstrate statistically significant proportions of events between groups when expressed as relative risks

CABG is, without doubt, the treatment of choice for patients with severe CAD. This procedure requires vascular grafts, both arterial and venous, with an aim of optimizing blood irrigation of the myocardial tissue of the post-stenotic regions. Thus, a series of studies have been carried out to compare the efficacy of venous and arterial grafts. It has been proven that the viability of left ITA grafts is greater than grafts using the SV [7,9,10], which currently are utilized as a complement to the ITA to achieve complete revascularization. Thus, surgeons tried other arteries that may substitute SV grafts. Currently, the RA is the most commonly employed and most studied for this procedure in association with the ITA.

It is well known that the patency of the graft, independently of whether it is venous or arterial, depends both on factors inherent to the patient such as the presence of comorbidities (diabetes, dyslipidemia, arterial hypertension and renal insufficiency), and on factors related to the method of dissection, preservation and pharmacological protection of the vessel and the implantation technique used [10]. Additionally, the territory of the target coronary vessel is also related to the higher or lower patency of the graft [21].

We followed a wide ranging objective without restricting the postoperative period for the angiographic evaluation of the graft, the involved vessel and the characteristics of the patients included. This conduct was adopted to offset the extreme lack of controlled and randomized clinical trials that cover this theme. Only three randomized trials were included in this systematic review. The databases investigated include a considerable percentage of the most important periodicals of cardiovascular surgery, showing that there is insignificant bias of publication. The search strategy utilized was highly sensitive, checking all the studies related to the theme. The controlled and randomized or quasi-randomized trials were chosen for inclusion in this systematic review as they had the greatest reliability and level of evidence with the lowest Type 1 (?) and Type 2 (?) errors. Masking was not demanded for inclusion and the number of patent grafts were evaluated and not the number of patients.

The randomized and controlled trial by Dessai et al. [29] published in 2004, compared the patency at 12 months of RA and SV grafts. Its methodology is reproducible and scientific with an adequate method of randomization, and a reasonable number of patients (n = 440). The angiographic evaluations were pre-determined and the results gave a higher patency for RA grafts compared to SV grafts.

Muneretto et al. [30], also in a publication from 2004, compared the patency of RA and SV grafts over 12 months. The angiographic results of 152 patents distributed into two groups were evaluated. The number of participants is relatively small, increasing the uncertainty of the results and conferring a considerable confidence interval. The methodology is reproducible, with pre-programmed angiographs, however, the form of randomization of the patients was not described. The authors concluded that the RA graft has a better patency than the SV graft.

It is important to note that these clinical trials have a pre-determined angiographic study in their methodology, even if the patient does not present with ischemic symptoms. Angiographic studies based on symptoms do not offer a satisfactory representativity of the population, as the failure rate of the grafts of these patients is expected to be high [10]. Buxton et al. [10] in 2005 published a study whose result stated that the patency of the ITA, RA and SV grafts were higher in protocols in which the patients were evaluated independently of the symptoms than those in which the patients were submitted to angiographic examination due to symptoms.

In the results, we present a graph of the overall effect, edited in a random model. This model highlights the clinical and methodological heterogeneities present in the studies, showing them in the statistical calculations. However more reliable results were expected, that showed the possible aforementioned heterogeneities better as the included studies were not homogeneous. The method to select the patients, the diagnostic criteria, the form of angiographic evaluation and the surgical procedures were not similar among the included clinical trials. Thus, no significant difference was observed between the effects of using RA and SV grafts.

Nevertheless, although the included studies were good quality with satisfactory values in the study quality scale of Jadad et al. [34], the statistical power of this metanalysis is low, as the number of accumulated grafts was very small (n = 1116). Nonetheless, there is a greater proportion of patency of the RA graft compared to the SV graft expressed in the results of the random model. However, a convict affirmation that the RA graft is better than the SV graft requires more controlled and randomized clinical trials, involving an expressive sample size following a standardized, uniform and homogeneous methodology. The authors suggest that the methodological design of future clinical trials should be based on the publication of Fremes [35]. This methodology with certain modifications can be utilized to direct a series of controlled and randomized clinical trials.