Objective: To present a new surgical approach that consists of the implantation of a mitral prosthesis smaller than the annulus with traction of the papillary muscles to reduce the sphericalness of the left ventricle. Method: Between December 1995 and September 2005, 116 heart disease patients were operated, all of whom were at end-stage despite of full medication. The patients were analysed according to clinical criteria, echocardiographic findings and morphology of the left ventricle. Results: Hospital mortality was 16.3% (19/116) and mid-term follow-up (38 ± 16 months) showed evidence of improvement in the clinical status and some echocardiographic parameters, in particular reduction of the sphericalness of the left ventricle. Conclusion: This technique, despite of the high mortality rate, offers a promising therapeutic alternative for the treatment of patients in refractory heart failure with cardiomyopathy associated to moderate or severe secondary mitral regurgitation.

Currently, there are high incidences and prevalences of Congestive Heart Failure (CHF) with approximately 23 millions of people suffering from this disease and 2 millions of new cases diagnosed each year worldwide [1,2].

The gold standard for these patients is heart transplantation, but due to the low number of donors and the rigorous criteria of indication, a large number of these patients die whilst waiting for the definitive treatment [3-5].

The long-term result in this group of patients is not satisfactory due to high rates of mortality. Thus, in an attempt to benefit a greater number of patients, a series of alternative surgical procedures have been proposed including cardiomyopathy, partial left ventriculectomy, surgical correction of mitral valve regurgitation, biventricular heart pacing and myocardial revascularization either as an isolated procedure or associated to ventricular repair [6-11].

Mitral valve regurgitation in patients with dilated cardiomyopathy is linked to a reduction in short-term survival rates [12]. Mitral valve regurgitation is associated to the interaction of several factors: segmental changes in ventricular contractility, papillary muscle dysfunction, dilatation of the mitral valvar annulus and in particular, geometrical changes of the ventricular cavity with loss of its elliptical form [13].

By analyzing patients who had been submitted to partial left ventriculectomy and publications on the subject, a functional improvement was identified mainly in patients with surgical correction of mitral valve regurgitation. Based on these data a surgical technique was proposed that involves the surgical correction of mitral valve regurgitation with the implantation of a prosthesis smaller than the valvar annulus associated with internal remodeling of the left ventricular cavity by shortening the longitudinal axis.

The goal of this work is to analyze the impact of this surgical technique on patients with advanced dilated cardiomyopathy and secondary mitral valve regurgitation, by means of clinical and echocardiographic data.

Between December 1995 and September 2005, 116 patients with advanced dilated cardiomyopathy and moderate to severe mitral valve regurgitation were submitted to the surgical procedure discussed in this work. The group constituted of 65 (55.10%) male patients and ages ranged from 25 to 82 years (mean of 62 ± 12 years); 23 (19.50%) patients were over 70 years old.

All the patients had been hospitalized at least twice within the previous three months for congestion in spite of adequate medication. According to the classification of the New York Heart Association (NYHA) 83% were in functional class (FC) IV and 17% in FC III in the immediate preoperative period. Eleven patients were in the intensive care unit on circulatory support taking vasoactive drugs and using an intra-aortic balloon pump; two patients were in dialytic program and one was in cardiogenic chock. Moreover, 21 patients had previously been submitted to heart surgery for coronary artery bypass grafting (CABG), left ventricular aneurysmectomy, partial left ventriculectomy and/or ventricular resynchronization, either in isolation or associated. The mean follow-up time after surgery was from 38 ± 16 months.

Inclusion criteria were: advanced CHF (with two or more periods in hospital within the previous three months due to the congestion) and moderate or severe mitral valve regurgitation as diagnosed by transesophageal echocardiogram. The exclusion criteria were organic diseases of the mitral valve, associated aortic valvuloplasty and ischemic disease with indication for CABG (with confirmed myocardial viability) and/or ventricular repair.

The study protocol was approved by the Ethics and Research Commission of the Paulista School of Medicine and the patients agreed to participate in the study by signing an informed consent form.

The surgery was initiated with hemodynamical monitoring including measurement of the mean arterial pressure, central venous pressure and urinary excretion, as well as respiratory monitoring by pulse oximetry.

The surgery followed the normal manner; medium sternotomy was performed with cannulation of the aorta and the superior and inferior vena cavae through the right atrium after systemic heparinization (4 mg/kg) under moderate hypothermia of 32ºC.

Hypothermic anterograde sanguineous cardioplegia (at approximately 18ºC) was utilized as myocardial protection with added potassium (15mEq/L) during induction. For subsequent doses, at 15-minute intervals, blood at 32ºC was added to the perfusate without the addition of any other substances.

The mitral valve was approached by means of longitudinal left or transseptal atriotomy depending on the diameter of left atrium. The anterior leaflet was sectioned in half, according to the technique described by Miki et al. [14], creating two halves whose angles were sutured to the commissures. The aim of this was to shorten the longitudinal axis of the heart using the traction of the papillary muscles and consequently to restore the elliptical form of the left ventricle.

After this a prosthesis, smaller than the mitral valvar annulus, was implanted with preservation of the posterior leaflet. Of the total prostheses utilized, 111 were biological and five were mechanical, with diameters as follows: 25 (two cases), 27 (48), 29 (43), 31 (20) and 33 (three).

For patients with an ischemic etiology, 64.70% (44/68) were submitted to associated procedures: CABG (19), exclusion of fibrotic areas (20) or both (three) and ventricular resynchronization (two).

At the end of the surgery, the patients in normothermia were transferred to the recovery unit where they were continuously monitored.

All the patients were accompanied during the hospital and out-patient evolution by the same member of the surgical team, with the protocol completed to compare pre- and postoperative data.

Statistical analysis consisted in a comparison of parameters studied in the three observational periods of observation, when data were collected for all patients. The observations were recorded in the following periods:

The parameters evaluated were:

 Ratio between the long and short axes of the left ventricle.

Friedman's test was utilized to analyze the results by comparing pre- and postoperative values. Statistical significance was established at a p-value = 0.05. Analysis of survival was obtained using the Kaplan-Meier's curve.

Of the 116 patients included in this study, 97 were discharged from hospital and were accompanied in the outpatient clinic for a follow-up period of from 1 to 118 months (mean of 38 ± 16 months). 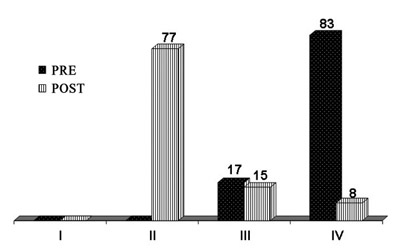 There was a significant improvement in the functional class, where in the preoperative period 83% of patients had been in FC IV and 17% in FC III (at the time of surgery), in the last postoperative assessment (performed in all patients that were discharged from hospital) 77% were in FC II and 15% in FC I. Eight per cent of patients remained in FC IV, among whom two are on the transplantation list and another two have already been submitted to this procedure (Figure 2). 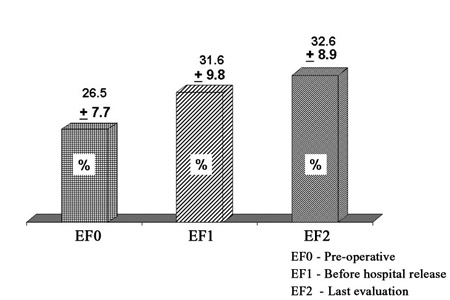 The left ventricular ejection fraction and the ejection volume were analyzed by transesophageal echocardiogram, with data obtained in the postoperative period (before hospital discharge) and during assessments as out-patients. There was a modest but significant increase in the ejection fraction between both observation periods. Additionally, there was a significant increase in the ejection volume seen between the observation periods (Figures 3 and 4). 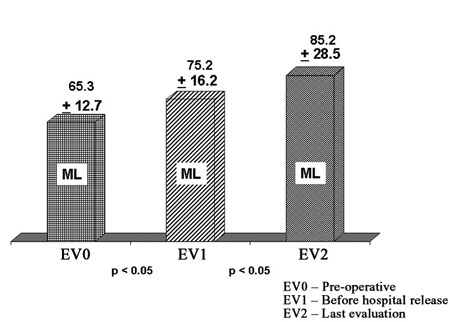 Fig. 3 - Ejection fraction in the preoperative period, before hospital discharge and six months after surgery 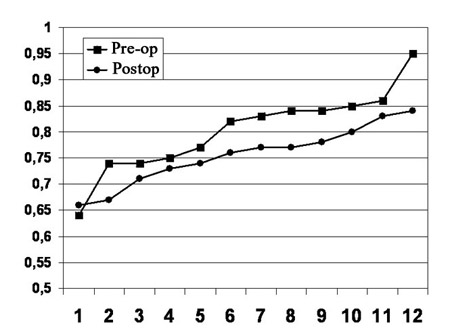 Fig. 4 - Ejection volume in the preoperative period, before hospital discharge and six months after the surgery

There was a reduction of left ventricular sphericity that was analysed by measuring the sphericity index, which corresponds to the ratio between the two axes of the left ventricle (width and height), obtained by nuclear magnetic resonance imaging performed for 12 consecutive patients (Figure 5). 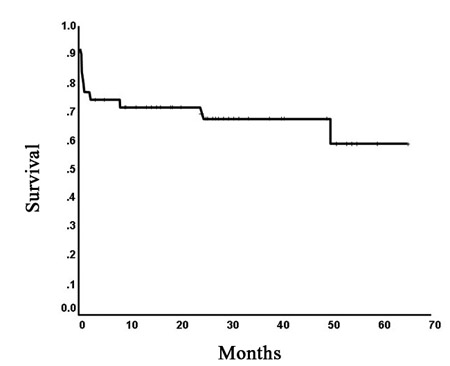 The clinical treatment of CHF is based on knowledge of the hemodynamical and neuro-humoral mechanisms of this syndrome, but these therapeutic modalities are not definitive; they offer only a temporary improvement in the quality of life [15]. Despite optimization of the clinical treatment, a considerable percentage of these patients evolve to more advanced stages of the disease and heart transplantation is the treatment of choice.

Patients with CHF may be basically cared for by medicinal treatment (this delays the evolution of the disease, but does not cure it) and with elective surgical treatment, that is, heart transplantation (which is not possible for all patients).

Evolution to functional mitral valve regurgitation in patients with dilated cardiomyopathy is associated with deterioration of the hemodynamical state and reduces the survival rate [16].The presence of mitral valve regurgitation causes volumetric and pressure overloads with dilation of the left ventricular cavity. The increase in the parietal tension favors distension of the myofibrils, reduction of the contractile capacity and increases in the myocardial oxygen consumption.

Bolling et al. [17,18] proposed reducing mitral valve leaks by performing valvuloplasty but respecting the integrity of the mitral valve system. In a 12-month clinical follow-up the authors observed reductions in the mortality rate, the quantity of medicine required to treat CHF and the congestive symptoms.

Calafiore et al. [19] on comparing several surgical techniques used in the treatment of end-stage dilated cardiomyopathy showed that treatment of the mitral valve causes lower rates of intra-hospital mortality and deaths over the medium-term clinical follow-up.

Understanding the importance of eliminating mitral valve regurgitation in patients with dilated cardiomyopathy, Buffolo et al. [9] and Paula [16] proposed a technique that associates prosthesis implantation in the mitral valve position with the repair of the anterior leaflet, aiming at re-establishing the normal position of the papillary muscles in the mitral valvar annulus. In this technique, ventricular restoration occurs due to the shortening of the largest ventricular axis after realignment of the papillary muscles and by the implantation of a smaller prosthesis than the valvar annulus [20].

In this work, we presented the results of the aforementioned technique indicated for advanced dilated cardiomyopathy patients with moderate or severe functional mitral valve regurgitation. Initially, the proposal of a new operative alternative for treatment of refractory CHF was based on observations of the results obtained in patients submitted to left partial ventriculectomy, in which there was a more evident functional improvement when some type of intervention of the mitral valve was performed.

In this series, despite of the high operative mortality, in many cases related to specific high-risk clinical conditions at the time of the surgery, the actuarial survival curve was stable after hospital discharge, with a low late mortality rate.

The follow-up of these patients revealed a significant improvement in the functional class; 92% of them presented an improvement compared to before the surgery (Figure 2), with probable benefits to their quality of life.

The size of the left ventricle after restoration of the geometrical shape is a factor related to the survival of these patients and in this study, we analyzed the ventricular sphericity index, which corresponds to the ratio between the long and short axes measured by nuclear magnetic resonance. The data obtained from 12 consecutive patients showed a reduction of this index and so there was a reduction in the ventricular sphericity.

Thus, despite of the severity of the clinical situation, this technique offers an alternative surgical treatment for CHF that may reduce congestive symptoms and possibly provide an increase in life expectancy. This principally results in a better quality of life however, further prospective studies are necessary to assess the results obtained in this study over the long term.

1. An improvement in the functional class was observed in 92% of the patients studied when comparing the pre- and postoperative data.

2.There was a modest, but statistically significant, increase in the left ventricular ejection fraction comparing the pre- and postoperative data.

3. There was a significant increase of the left ventricular ejection volume comparing the pre- and postoperative values.

4. There was a reduction in the left ventricular sphericity index, assessed by nuclear magnetic resonance.