Acetylsalicylic acid was commercially developed more than 100 years ago in 1897 by Felix Hoffman and was registered under the name aspirin [1]. The analgesic, anti-inflammatory and antipyretic effects have been known for centuries but only in 1971 did Sir John Vane describe the platelet antiaggregant mechanism of aspirin which consists of irreversible acetylation and inactivation of the cyclooxygenase 1 enzyme [2].

Utilized in the primary and secondary prevention of cardiovascular disease, aspirin reduces the prevalence of myocardial infarction by 34%, strokes by 25%, pulmonary thromboembolism by 67% and deep venous thrombosis by 23% [3]. The range of its protection is however limited with its platelet antiaggregant effect not homogeneous for all patients [4].

Recently some studies have warned about an inefficient inhibition of platelet aggregation by aspirin [5-7]. This phenomenon, denominated aspirin resistance, affects from 5% to 45% of patients with stable coronary artery disease, suggesting that they will have fewer benefits in preventing atherothrombotic events [7].

Many risk factors also affect the efficacy of aspirin including advanced ages, smoking, alcohol consumption and serum fibrinogen concentrations. Given the high prevalence of cardiovascular diseases, the potential impact of resistance to aspirin in the daily practice of physicians and cardiovascular surgeons and the fact that risk factors interfere in the efficacy of this medicine as a platelet antiaggregant, we decided to design a study with the following objectives: (1) to evaluate aspirin resistance in cardiovascular disease patients, (2) to evaluate the level of serum fibrinogen in patients taking aspirin compared to others who do not take it and (3) to correlate platelet aggregation and serum fibrinogen with parameters linked to cardiovascular risk such as advanced age, smoking and alcohol intake. We also highlight the role that this knowledge may influence clinical and cardiovascular practices affecting conduct and treatment of patients submitted to coronary artery bypass grafting.

Eighty-two patients from the clinical wards of the Leonor Mendes de Barros Hospital - Conjunction Hospital of Sorocaba (CHS) participated in this study. Of these 82 patients, 41 took aspirin as their sole platelet antiaggregant (Group 1) and 41 did not take any type of platelet antiaggregant medication (Group 2 - control). Group 1 consisted of 15 women and 26 men all of whom suffered from heart diseases diagnosed by electrocardiogram or echocardiogram. The ages varied from 32 to 89 years old with a mean age of 59.68 years. The Control Group was formed of 29 female and 12 male patients without cardiovascular diseases. The ages ranged from 30 to 75 years old with a mean of 41.39 years.

The clinical and demographical characteristics analyzed included age, gender, smoking (packs per day), alcohol intake, serum fibrinogen concentration (mg/dL) and platelet aggregation (%). Only patients taking 100 mg/day of aspirin as a platelet antiaggregant for at least one week were included in Group 1. Patients receiving doses higher or lower than 100 mg/day and patients taking other antithrombotic agents with the aspirin were excluded from the study. All the patients signed written consent forms and the research was approved by the Local Ethics Committee (CCMB-PUC/SP).

Blood was drawn by venous puncture using disposable Vacutainer-type equipment containing 2.7 mL 3.2% sodium citrate as an anticoagulant. The STA Compact (Stago) method was employed to measure the serum fibrinogen concentration. Reference values are between 200 and 400 mg/dL. The laboratorial measurement of serum fibrinogen concentrations was performed in the Regional Nucleus of Hemotherapy of CHS.

The SPSS (Statistical Package for Social Sciences) version 13.0 computer program was utilized to analyze the results. Student t-test controlled by the Levene test of variance equality was employed with the aim of verifying differences between the parametric variables; The Mann-Whitney test was used to evaluate possible differences in the distributions of non-parametric variables and an analysis using the Spearman correlation to investigate possible associations between the variables was made. A level of significance of 5% (p-value < 0.05) was adopted.

Of the 82 patients, 50% (41) took aspirin at a dose on 100 mg/day (Group 1) for at least one week whilst the other 50% (41) did not take this medication (Group 2). The demographic and clinical characteristics of both groups are described in Table 1. In this study, the mean age of Group 1 was significantly higher than Group 2, revealing that older people take more aspirin. There are more men among the patients who take aspirin confirming that there is a greater incidence of cardiovascular events among men whilst there are more women in the group that does not take platelet antiaggregants. Moreover, there are more smokers among the patients who require the antiaggregants benefits of aspirin as the prevalence of smokers is higher in Group 1. The majority of individuals in both groups do not consume alcoholic drinks and even so the greatest prevalence of consumers was in Group 1. On average a higher serum fibrinogen concentration was observed among the patients who took aspirin. However there was no statistically significant difference between the mean values of platelet aggregation of the two groups. 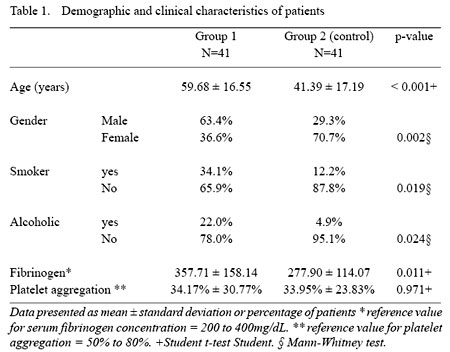 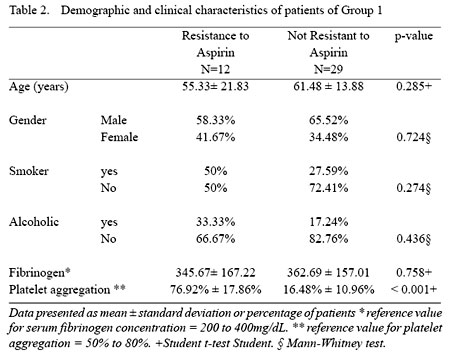 In this study, patients, who take aspirin as the sole platelet antiaggregant, are a group of individuals that present per se an increased cardiovascular risk as they are older, are predominantly men, smoke more and have a higher concentration of serum fibrinogen. The data here are compatible to previously published reports as patients who develop with coronary artery disease when young are characterized by the presence of the aforementioned risk factors amongst others including obesity, systemic arterial hypertension, diabetes mellitus, unfavorable lipid profile, high levels of apolipoprotein B and low levels of apolipoprotein AI [8]. It is also important to stress that currently the majority of patients submitted to coronary artery bypass surgery are old, male, smokers and in bad physical conditions [9].

Serum fibrinogen concentrations increase parallel to age which is the main determinant [11,12]. Smoking on the other hand, is the second most important factor associated with fibrinogen [12,13], with more marked alterations in women [13]. Possible explanations for this are related to the inflammatory reaction, endothelial injury, reduced fibrinolysis and platelet activity induced by smoking [14].

Serebruany et al. [16] affirm that moderate consumption of alcohol (20 to 30 g/day) may reduce the risk of coronary artery disease by at least 40%. This beneficial property of alcohol is described for small to moderate quantities of alcoholic drinks, as the ingestion of large quantities leads to an increase in morbidity and mortality due to cardiovascular diseases [17].

In respect to the efficacy of aspirin as a platelet antiaggregant, the term aspirin resistance has received special attention in current medical publications thanks to its role in the day-to-day practice of clinicians and cardiovascular surgeons. In our study, 29% of the patients treated with 100mg/day aspirin alone demonstrated resistance to the antiplatelet effects of aspirin. The data obtained are less than the 60% reported by Mueller et al. [18], utilizing the same dose of medication in patients submitted to peripheral arterial angioplasty.

In our study, patients resistant to aspirin are younger, smoke more, consume higher quantities of alcohol and have lower serum fibrinogen concentrations than patients not resistant to aspirin. These data suggest a possible influence of the age, consumption of alcohol and serum fibrinogen on the mechanisms responsible for aspirin resistance. In respect to smoking our results do not agree with other publications as smoking is a extrinsic factor in the loss of platelet sensitivity to aspirin [5,6,19].

Although widely used in the prevention and treatment of cardiovascular diseases, 29% of patients who take aspirin as the sole platelet antiaggregant showed resistance to its antithrombotic effects. Additionally, advanced age, smoking, and alcohol consumption directly influence fibrinogen concentrations. We believe that resistance to aspirin is relevant in treatment provided by clinicians and cardiovascular surgeons, in that, patients who receive aspirin should be periodically assessed in respect to platelet aggregation and in the case of resistance, aspirin should be substituted for another medication.

This work was financed with a grant from the PIBIC- CEPE - PUC/SP.