EXPERIENCE THE OF SERVICE

Objective: To evaluate the use of the right common carotid artery to establish cardiopulmonary bypass (CPB) and the use of anterograde cerebral perfusion as cerebral protection in patients scheduled for ascending aortic repair surgery. Methods: Twenty-three patients were submitted to aortic repair because of different aortic diseases. In all of them a Gore-tex tube was anastomosed to the right common carotid artery to establish CPB and anterograde cerebral perfusion during distal anastomosis. Average CPB time was 195 minutes; average temperature was 24 degrees Celsius; average anterograde cerebral hypoperfusion time was 29 minutes; average hospital stay was 18 days. Results: None of the 23 patients had any neurological dysfunction within the first 48 postoperative hours. Prior to discharge, all of them were submitted to the "Mini Mental State Examination (MMSE)" which did not identify any cognitive dysfunction or neurological injury. Two patients developed pulmonary infection, two patients needed dialysis and two patients died due to the high complexity of the cases. There were no perioperative deaths. Conclusion: This is a practical, fast, efficient and reproducible way to establish CPB and anterograde cerebral protection, reducing the risk of cerebral ischemia and improving the natural postoperative outcome of these procedures.

The femoral artery has been, over the few last years, the favorite access for surgeons to establishment cardiopulmonary bypass (CPB) to repair aortic aneurysms and dissections. However, it has been reported that perfusion via the femoral artery is associated with higher morbidly, as well as bad cerebral perfusion [1-3]. Additionally, this technique is contraindicated in cases of aorto-iliac and femoral artery disease and in cases of acute aortic dissections in which there is involvement of the femoral arteries. Another factor which must be taken into account when establishing CPB via the femoral artery is the inversion of flow, which favors the release of 'debris', thereby increasing the risk of strokes [3]. Aiming at finding alternatives, Neri et al. [4] in 1999 demonstrated that with cannulation of the auxiliary artery it is possible to repair dissecting type-A aneurysms, without causing complications due to cannulation, thus representing a safer manner to use CPB. Kazui et al. [5] demonstrated, in a long observation work (from 1990 to 1999) an analysis of 220 patients, that anterograde cerebral perfusion, as a method of cerebral protection, is possible with cannulation of the brachiocephalic trunk and left carotid artery, after the incision of the aneurysm. Souza et al. [6] utilized CPB for systemic perfusion, as well as for selective anterograde cerebral perfusion with hypoflow through the right common carotid artery (RCCA) during aortic arch repair procedures. 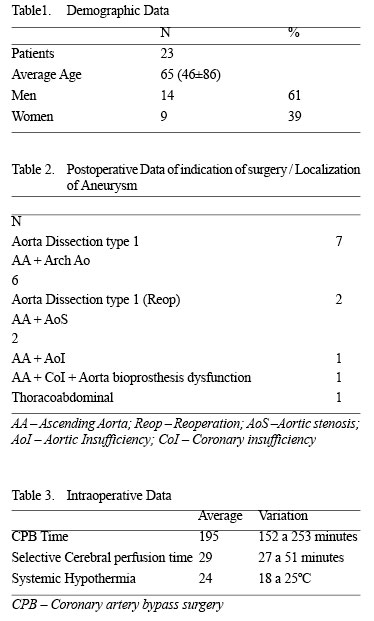 The technique consists in the dissection and repair of the RCCA, in which, by longitudinal arteriotomy, an 8-mm polytetrafluoroethylene tube is anastomosed, sectioned in a bevel shape, to the RCCA, with 6-0 prolene sutures, making arterial cannulation through the graft possible.

The venous cannulation is achieved in the normal way by means of a two-section cannula inserted in the right atrium (Figures 1 and 2). 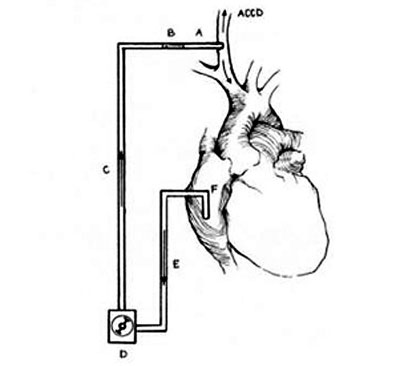 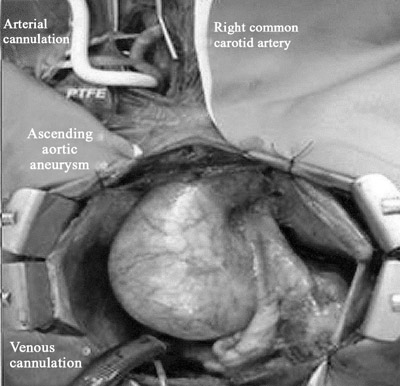 Fig. 2 - Surgical aspect of perfusion by the right common carotid artery through the PTFE tube connected to the arterial line of the CPB

For three patients, we opted for CPB through the femoral vein, because they were being re-operated and there was a risk of rupture of the aneurysm during the median sternotomy. In these three cases, during reheating, the venous cannula was repositioned in the right atrium in the normal manner. Systemic hypothermia varied between moderate and deep and was associated to cardiocirculatory arrest. During the procedure on the aortic arch and great vessels, the aortic clamp was repositioned on the RCCA, close to the anastomosis of the PTFE tube (Figure 3). 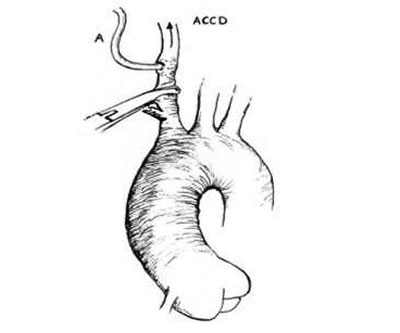 The clamp was positioned on the brachiocephalic trunk (BCT) when there was a high risk of medullary ischemia. An anterograde cerebral flow was maintained at around 10 mL/kg/minute associated with topical hypothermia (ice helmet). During this series, a left common carotid artery approach was used for just one patient with acute aortic dissection involving the RCCA.

In the group of 23 patients operated on using this technique with CPB via the RCCA and anterograde cerebral perfusion, there were no intraoperative deaths. Two patients died due to the severity of the disease; one suffered from an acute aortic dissection with severe entero-mesenteric ischemia and the other had an infected pseudo-aneurysm that evolved to untreatable sepsis in the postoperative period. All the other 21 patients recovered in the postoperative period without neurological sequels. Before discharge, the patients was submitted to the Mini Mental State Examination test (MMSE) [7,8], where orientation, memory, attention, calculation and language were evaluated to assess postoperative cognitive alterations related to transitory ischemia, as well as alterations of the cerebral cortex. In the analysis of this test, patients that present a score of almost thirty are not suffering from cognitive alterations (Figure 4). 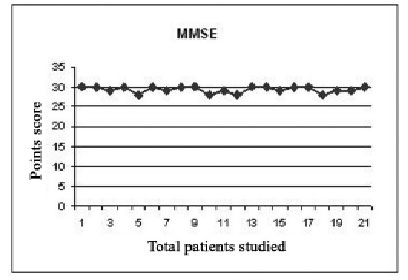 Fig. 4 - In the Mini Mental State Examination test (MMSE), patients that present a score of almost thirty are not suffering from cognitive alterations

Analysis of this work concludes that the right common carotid artery is an approach that enables both CPB with systemic perfusion and maintenance of adequate anterograde cerebral flow, reducing the possibility of cerebral ischemia. It is an efficient, practical, reliable and safe method that is easy to reproduce and as it does not lead to significant neurological damage it changes the natural history of the postoperative period of patients submitted to surgeries involving the ascending aorta.

The authors would like to thank Prof. Dr. Eduardo S. Bastos for the valuable guidance received during the production of this work.