The case of a thoracoabdominal aortic aneurysm rupture in the right pleural space of a 76-year-old patient with chronic renal insufficiency is reported. Possible therapeutic measures are discussed.

A term derived from the Greek for dilation, aneurysm corresponds to a vessel with a diameter 1.5 times greater than normal. Aneurysms of the thoracoabdominal aorta were classified by Crawford into types I to IV depending on the location of the dilation from the left subclavian artery to the abdominal segment [1]. In the evolution of this disease ruptures, which are directly linked to an increase in the diameter of the aneurysm, are the most difficult and most feared complications. Thus, the treatment of aneurysms is a great challenge [2], with very precise indications due to the high morbidity and mortality rates.

The objective of this study was to report the case of a 76-year-old patient with dialytic chronic renal failure, a thoracoabdominal aortic aneurysm rupture and tamponade in the right pleural cavity.

A 76-year-old male patient was referred to the emergency department of the Teaching Hospital in Maringá, Brazil, due to thoracic pain and a dry cough during a hemodialysis session. The patient had been suffering from chronic renal failure for two years due to polycystic kidneys. He was a smoker until diagnosis of his disease and he did not have arterial hypertension.

In the physical examination at admittance he presented with a blood pressure of 80 x 50 mmHg, a vesicular murmur at the right base and cardiac auscultation demonstrated normal rhythmic sounds with a mitral systolic murmur. His abdomen was flaccid, without pain and with a pulsing mass in the epigastrium and mesogastrium, the De Bakey sign was positive and a systolic murmur was auscultated. All pulses were palpable in both upper limbs but for the lower limbs only femoral pulses were palpable. There was no fremitus or murmurs along these arterial routes.

Complementary examinations showed slightly reduced hemoglobin and hematocrit levels, high levels of creatinine (6.75 mg/dL), electrolytes, blood sugar, cholesterol and triglycerides; arterial gasometry and enzymes (troponins, CK-MB and amylases) were without alterations. A chest radiograph showed a slight increase in the heart area and opacification at the right base. An electrocardiogram identified sinus rhythm without signs of ischemia. A pleural puncture was performed on the right and 5 mL of hemorrhagic fluid was collected (2456 red blood cells/mL).

The patient was submitted to a computed tomography of the thorax that demonstrated the descending thoracic aorta was dilated (8.0 cm) and torturous from 4.0 cm below the left subclavian artery up to the abdominal aorta with an excentric thrombus and rupture to the right pleural cavity (Figure 1). 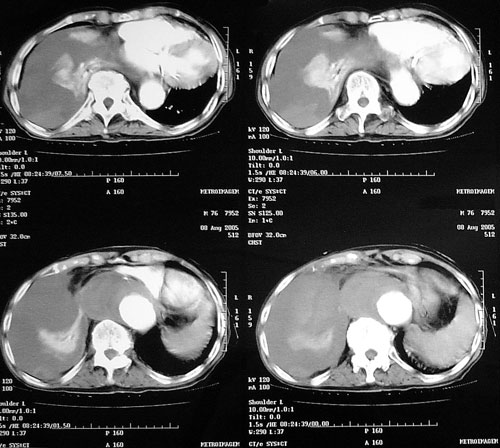 Fig. 1 - Result of the computed tomography of the thorax showing contrast flowing from the thoracic aorta to the right pleural cavity

A Doppler echocardiogram of the abdominal region demonstrated a continuous dilation of the aorta to the superior mesenteric artery and lateralization to the celiac trunk. Its distal diameter was 3.0 cm (Figure 2). Thus the aneurysm in question was classified as Crawford type III.

Fig. 2 - Abdominal ultrasound showing a continuation of the dilation of the thoracic aorta to the superior mesenteric artery

In spite of the clinical severity and the renal failure, the patient was hemodynamically stable and due to family choice conservative treatment was maintained with release from hospital on the 12th day.

Evolution of the patient was satisfactory for four months with an improvement in the pain, clinical stability and no signs of active bleeding, but at the end of this period, he again presented with thoracic pain and hemodynamic instability, evolving with hypovolemic shock and death.

There is little data on the evolution and characteristics of thoracoabdominal aortic aneurysms caused by atherosclerosis, except in respect to rupture [1,3]; even so this etiology is considered common. It is more frequent in men and it is reported as a risk factor similar to arterial hypertension and smoking [1].

Initially it may be asymptomatic and diagnosed when performing a complementary examination of another structure. Alternatively, if there is a complication such as rupture specific signs may be identified, depending on the location of the bleeding; more advanced diagnostic techniques have detected thoracoabdominal aneurysms easier [2]. If it is symptomatic, the main symptom is thoracic pain due to expansion and compression of neighboring structures, as was seen here. In this case and in others, signs of hemodynamic instability might lead to a diagnosis or clinical suspicion of aortic aneurysm [1,3].

Confirmation is achieved by complementary examinations initially with a simple chest radiogram showing enlargement of the mediastinum, a variation in the size of the heart area and shadowing of the pleural cavity [3], similar to the case presented here. However in this case pleural effusion can be mistaken for a sequel of chronic renal failure and the aneurysm may remain undetected.

A computed tomography with contrast can identify the diameter, proximal to distal length, anatomic relationships of the aneurysm and the presence of dissection or intraluminal thrombi. Angiography is not recommended to measure an aneurysm, but can also supply the cited data, as well as any location of rupture [1]. It was not performed in this patient as diagnosis was already well defined and because of renal insufficiency.

The advent of Doppler echocardiography allows an evaluation of the infra-renal portion of the aorta and so it is useful for diagnosis, as in this case, showing the distal extent of the aneurysm.

Other examinations that may also help in diagnosis are transesophageal echocardiography to evaluate the descending aorta when there is dissection and magnetic resonance that may provide information supporting findings of computed tomography [1].

Rupture of this aneurysm depends on its size and position and presents with symptoms that may suggest dissection: pain in the interscapular region and occasionally hemoptysis or hematemesis. On examination there may be signs of hemodynamic involvement or pleural effusions [1,3]. In the current case, the descending aorta ruptured during diagnosis but was contained in the right pleural cavity. At death, rupture also occurred in the right hemithorax causing irreversible shock.

For patients diagnosed with spontaneous ruptures of the thoracic aorta, rapid surgery is imperative [1,2]; but, in this case surgical treatment was not performed because the family did not authorize the procedure and the patient was in a bad clinical condition.

Elective surgery is indicated depending on the general condition of the patient when the diameter reaches 6 cm if there is recent growth or if there is evidence of compression of neighboring structures [1,3].

The accepted standard treatment is to use an artificial graft but due to the good results achieved with endovascular correction of abdominal aneurysms, similar techniques have been developed for the management of this aneurysm.

By the alternative endovascular treatment, Rodrigues Alves et al. [4] described a protocol with clinical and anatomic criteria for a better definition for the prognosis of patients submitted to this procedure and concluded that they are capable of differentiating the groups of patients in respect to the success of the proposed treatment.

Palma et al. [5] investigated the results of the endovascular treatment of type B aortic dissections and concluded that it is a safe alternative which can replace conventional treatment in the majority of patients, similar to the results of Dagenais et al. [6], who demonstrated excellent results in carefully-selected cases but reported more time is required to see the evolution of cases before indicating endovascular treatment for low-risk patients.

The patient in the current report remained hemodynamically stable for four months when he evolved to death due to hemorrhage.

Although surgical mortality is high (30%), it is frequently the only therapeutic option, however with the possibility of a new alternative even though it is not perfect and has not been tested as well as the surgical method, it may prevent death in cases of rupture.