The case of a three-year 11-month white female patient, 97 cm tall and weighing 12 kg is reported. She was diagnosed as having truncus arteriosus at 4 months when she underwent a total correction using the Rastelli procedure with a valved cryopreserved homograft tube and closure of the interventricular shunt in another service. Six months after the correction, the infant presented with signs of congestive heart failure including dyspnea on effort, which gradually deteriorated. On this occasion the patient was in a good general state, ruddy, hydrated, dyspneic and acyanotic. Her thorax was symmetrical with ictus cordis at the 5th left intercostal space on the hemiclavicular line. The cardiac rhythm was regular with two clicks and systolic and diastolic murmurs of 2+/4+ at a pulmonary focus. Pulmonary auscultation was symmetrical without adventitious noises. The abdomen was flaccid at 1 cm from the right costal edge. The extremities had symmetrical palpable pulses without pressure differences among the four limbs (90/40 mmHg). The patient was taking furosemide and spirolactone.

An electrocardiogram demonstrated sinus rhythm with a heartbeat of 136 bpm. The ÂP was +30 and the ÂQRS was +120 without direct signs of atrial overload. A complete block of the right branch was identified. There were ventricular repolarization alterations secondary to the block. Holter monitoring demonstrated sinus rhythm with a right branch block, a maximum heartbeat of 155 and a minimum of 73 bpm. Ventricular and supraventricular ectopias were not recorded as no symptoms were identified on the log.

The radiogram showed visceral Situs solitus and a cardiothoracic index of 0.54. The middle arch was slightly bulging; there was slight peripheral hypovolemia, free diaphragmatic domes and the presence of steel threads in the sternum.

The echocardiogram demonstrated dysfunction of the RV-PT homograft tube, but with overall functioning of the RV normal, an unfavorable fact for the clinical presentation. A cineangiographic study was requested which confirmed insufficiency of the tube with significant stenosis at the connection of the tube with the RPA and LPA (Figure 1). It also showed that there was no pulmonary hypertension, which was considered important for the new correction of the RV-PT connection. 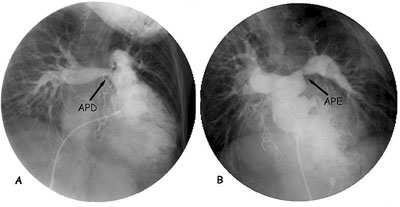 Median transsternal thoracotomy was performed with dissection of adherences and establishment of cardiopulmonary bypass at 25 ºC. Intermittent hypothermic anterograde sanguineous cardioplegia was utilized at 20-minute intervals. Regions of significant stenosis at the origin of the RPA and LPA (Figure 2) were identified and resected. A decellularized homograft tube (Figure 3) was inserted between the pulmonary arteries and the RV using 5-0 polypropylene thread for the anastomoses. The operation was completed using a bovine pericardium patch between the homograft and the incision in the RV (Figure 4). Perfusion time was 154 minutes and the myocardial ischemia time was 125 minutes. We stress that the choice of the decellularized homograft as replacement is directly related to the possibility of better long-term results [1]. An echocardiogram performed eight months following the intervention showed slight to moderate pulmonary valve regurgitation similar to in the immediate postoperative period, without stenosis of the valve or the origin of the pulmonary arteries. 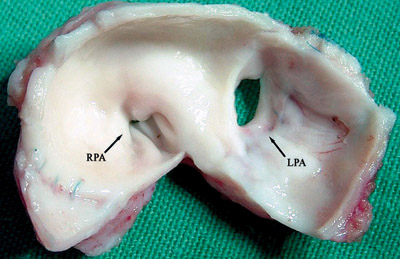 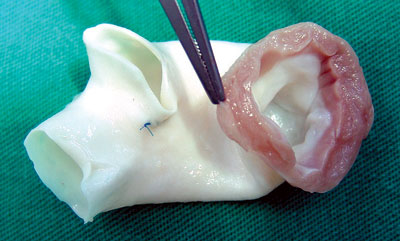 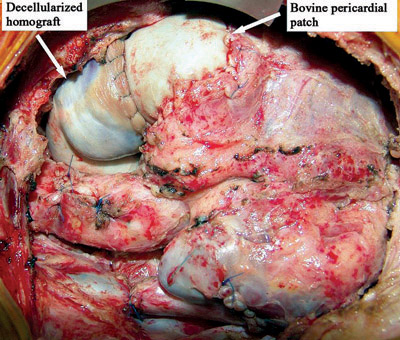 Fig. 4 - Final appearance of the implantation of the decellularized homograft completed with a bovine pericardial patch