The case of a six-year 11-month black male patient is reported. The full-term infant, born by c-section, weighed 2.8kg at birth. A cardiac murmur was auscultated and so congenital heart disease was diagnosed. The patient was not accompanied in the service of origin and evolved without medication and without specific symptoms. However, there was compromise of the neuropsychological development and the infant was hospitalized on several occasions for pulmonary infection. At three years old, the infant was evaluated in the pediatric emergency department of Hospital de Base in São José do Rio Preto due to abdominal pain. A cardiac murmur was identified and the patient was referred to our service of pediatric cardiology where apart from heart disease, William's syndrome was also diagnosed. The general state was good and the child was ruddy, hydrated, eupneic, acyanotic, and had a facies typical of a genetic syndrome with mental retardation. His thorax was symmetrical, ictus cordis was palpable at the 4th left intercostal space, the heart rhythm was regular with two clicks and normal sounds with a systolic murmur +3/6+ at the middle-high sternal edge irritating to the neck with accessory aortic focus and with fremitis at the sternal and carotid furculum. The pulmonary auscultation was normal as was the abdomen. The arterial pressure and pulses of all four limbs were normal.

The electrocardiogram demonstrated sinus rhythm with a heartbeat of 95 bpm. The ÂP was +60º and the ÂQRS interval was +60 without direct signs of atrial or ventricular overload. 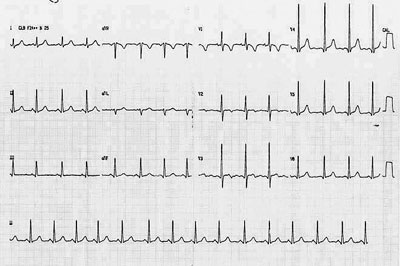 The radiogram showed visceral Situs solitus. The heart area and the lungs were within the normal limits.

The radiogram showed Situs solitus at levocardia. The patient had concordant venoatrial, atrioventricular and ventriculoarterial connections. There was a reduction in the lumen of the ascending aorta with thickening of the wall in the sinotubular portion indicating supravalvar aortic stenosis with an maximum instantaneous gradient of 94 mmHg. The left ventricle systolic and diastolic functions were preserved with moderate hypertrophy.

The echocardiogram diagnosed supravalvar aortic stenosis and a gradual increase in the gradient was seen over the following 3 years as the patient was asymptomatic. Prophylaxis of endocarditis and dental treatment was continually recommended until the best time for the operation.

Median transsternal thoracotomy was performed and the stenotic region was identified (Figure 2). Cardiopulmonary bypass was establishment at 25ºC using hypothermic intermittent anterograde sanguineous cardioplegia. After a diagonal opening the ascending aorta the incision was amplified lengthwise in the direction of the non-coronary Valsalva sinus. A second incision was made between the right and left coronary valves forming an inverted 'Y' that contained the ostium of the right coronary artery (Figure 3). A sufficiently large bovine pericardium patch in the form of a 'Y' was implanted with continuous 5-0 polypropylene sutures. Thus, the extended aortoplasty (Doty technique) was concluded as illustrated in Figure 4 [1]. The perfusion time was 111 minutes and the myocardial ischemia time was 64 minutes. The use nitroprussiate was necessary in the immediate postoperative period. The patient was released from the intensive care unit on the third postoperative day and from hospital taking captopril on the seventh postoperative day. A control echocardiogram showed a maximum instant gradient of 16 mmHg, compatible with the suture line. It is important to stress that there are other techniques that have excellent results without the use of prosthetic material, an extremely important fact for children and in specific situations [2,3]. 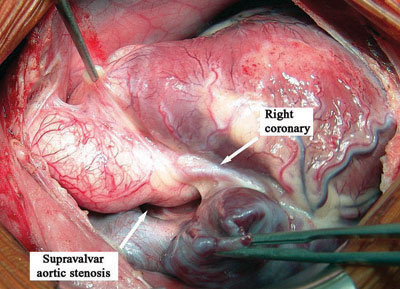 Fig. 2 - External aspect of the stenotic region of the ascending aorta 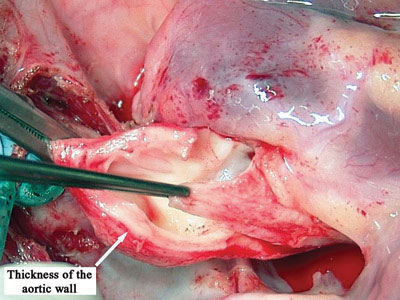 Fig. 3 - Image of the inverted 'Y' after incisions in the Valsalva sinus Note the thickness of the aortic wall at the site of the stenosis (arrow) 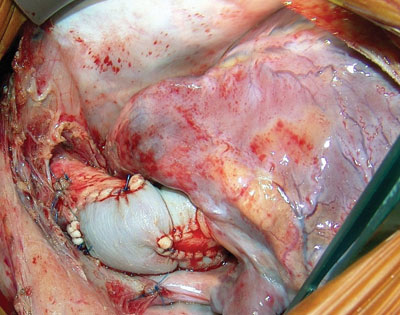 Fig. 4 - Amplification of the ascending aorta with a bovine pericardium patch in the form of a 'Y' (Doty technique)