Evaluation of the NNECDSG Score in a Brazilian public hospital

Objective: To compare the observed incidence of mediastinitis and strokes versus the expected incidence according to the NNECDSG score (Northern New England Cardiovascular Disease Study Group) in a population submitted to coronary artery bypass graft surgery. Methods: A retrospective consultation was made of medical records of all patients submitted to isolated CABG from January 1st, 2000 to December 31st, 2004, at the Cardiac Surgery Service of the Triângulo Mineiro Federal University (UFTM). Data regarding the incidences of observed mediastinitis and strokes and those estimated by the NNECDSG score were submitted to the Kolmogorov-Smirnov normality test. A comparison was achieved using the paired Student t test, with the level of significance determined as p=0.05. Results: A group of 230 patients were analyzed, including 144 (62.60%) men and 86 (37.39%) women. Sixty-one (26.52%) presented with diabetes, 30 (13.04%) with chronic obstructive pulmonary disease (COPD) and 23 (10%) had peripheral vascular disease (PVD). Emergency surgery occurred in 34 (14.78 %) cases. In 37 (16.08%) patients an ejection fraction (EF) of less than 40% was identified. Mediastinitis occurred in 12 (5.21%) patients and despite the greater general incidence in the sample studied, no statistical significance was found. Strokes occurred in 12 patients (5.21%) and in spite of the higher mean percentage incidence of observed strokes for all scores, a level of statistical significance was not found. Conclusions: Although the incidences of mediastinitis and strokes were greater in the population studied, these values showed no statistical significance, confirming the score recommended by the NNECDSG as a safe and efficient method for predicting postoperative mediastinitis and strokes in patients submitted to myocardial revascularization surgery in the UFTM.

In light of all the advances achieved in cardiology, whether clinical or interventionist, cardiac surgeons have seen a progressive change in the profile of patients submitted to coronary artery bypass grafting surgery (CABG) [1]. In Brazil, Sant'Anna et al. [2] demonstrated that current CABG patients are older and in worse clinical conditions (cardiac and systemic) than the ones operated 10 years ago.

Thus, it is expected that patients operated nowadays have a higher risk of complications. It is important to try to preoperatively predict the chance of each patient developing complications. Among these morbidities, strokes and mediastinitis are important as they increase mortality, hospitalization times and costs [3,4]. In Brazilian publications, data on predicting the morbidity of patients submitted to CABG is scarce.

The objective of the current study is to compare the incidences of mediastinitis and strokes versus the expected incidences according to the score proposed by the NNECDSG study (Northern New England Cardiovascular Disease Study Group) [3], in a population submitted to CABG in isolation in a general hospital in the interior of Brazil.

The project was approved by the Research Ethics Commission of the Federal University of the Triângulo Mineiro.

were collected retrospectively from an investigation of the records of all patients submitted to CABG in isolation in the period from January 1st, 2000 to December 31st, 2004 in the Heart Surgery Service of the Teaching Hospital of the Federal University of the Triângulo Mineiro. In total, 230 patients were included in the study. All the patients were submitted to CABG in isolation using cardiopulmonary bypass and anterograde cold crystalloid cardioplegia.

Myocardial infraction with less than 7 days of evolution was observed in 6 (2.6%) patients.

In 37 (16.08%) patients, the ejection fraction was less that 40%. Mediastinitis was defined as a culture and/or gram-positive infection in the deep mediastinal tissue and/or radiographic findings indicating mediastinal infection that required re-operation. Strokes were defined as a new focal neurological event that persisted for at least twenty-four hours.

The score proposed by NNECDSG was applied to the collected data and the expected incidence of mediastinitis and strokes were calculated for each patient.

The observed incidences of mediastinitis and strokes and incidences estimated using the NNECDSG score were submitted to the Kolmogorov-Smirnov normality test. A comparison was achieved using the paired Student t-test. The level of significance was set at a p-value = 0.05. 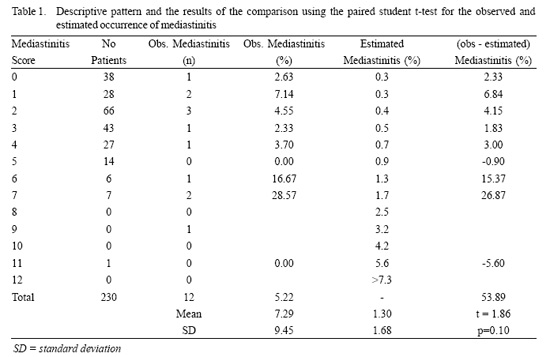 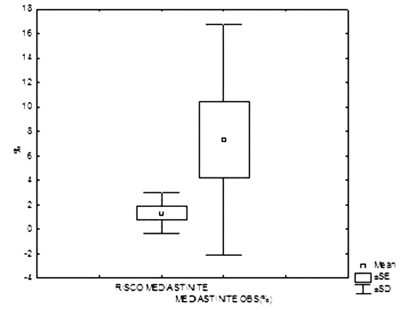 Fig. 1 - Mean pattern of the observed incidence of mediastinitis compared to the incidence estimated according to the NNECDS score

It is worthwhile mentioning that it is important to consider a larger sample of patients to verify whether this pattern persists as the variations in data were very high (variation coefficient > 100%) - Figure 2. 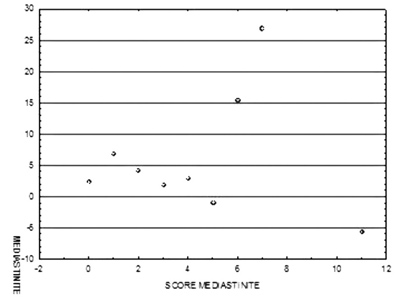 Fig. 2 - Spread of differences between the observed incidence of mediastinitis and that estimated according to the NNECDS score

The results related to the occurrence of strokes are reported in Table 2. 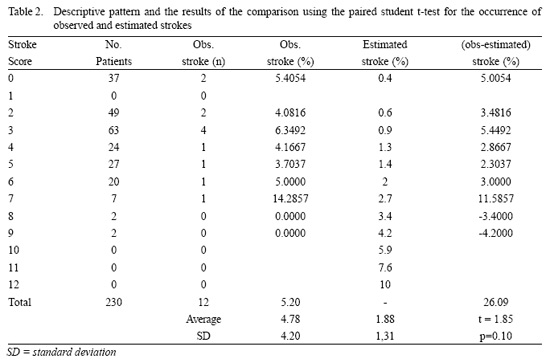 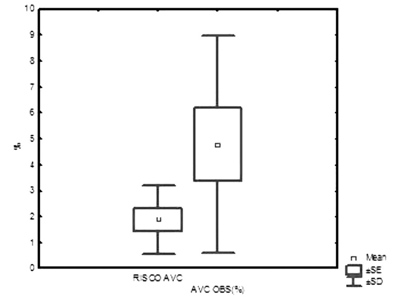 Fig. 3 - Mean pattern of the observed percentage of strokes and the percentage estimated according to the NNECDS score

It is worthwhile pointing out that it is important to consider a larger sample of patients to verify whether this pattern persists as the variations in data were very high (variation coefficient next to 100%) - Figure 4. 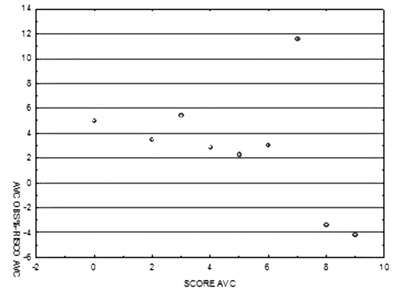 Fig. 4 - Spread of differences between the observed incidence of strokes and that estimated according to the NNECDS score

The current study demonstrates that the utilization of an American score approved by the ACC/AHA Guideline Update for Coronary Artery Bypass Graft Surgery, to estimate morbidity, may be applicable in Brazil.

In light of all the advances achieved in cardiology, whether clinical or interventionist, cardiac surgeons had seen a progressive change in the profile of patients submitted to CABG [1]. In Brazil, Sant'Anna et al. [2] demonstrated that the patients submitted to CABG nowadays are older and in worse clinical conditions (cardiac and systemic) than those operated 10 years ago.

There are numerous works in the international literature that try to predict the risk of operative mortality [1,5-8]. It is believed that systematization of variables may assist to compare results among institutions and among surgeons, working as a control of quality of cardiovascular surgery services [1,8-10].

The validation of these mortality scores has happened in some countries, with very varied study populations in respect to the population where the scores were originally designed [11-13].

The incidence of mediastinitis varies from 0.4% to 5% in different series [16-18]. Once established, mediastinitis causes high mortality rates varying between 10% and 47% [17,18]. The proportion of patients that undergo CABG, that are at high risk for infection, has increased substantially with the aging of the population, increasing the number of coronary re-operations. These patients are frequently associated to conditions that increase both the cardiovascular risk and the risk of infection, such as obesity and diabetes mellitus [17,18].

The incidence of strokes after CABG varies greatly in the literature: from 0.8% to 5.2% [19]. Moreover, it is already well established that this feared complication is associated to increases in the hospitalization time, costs and the mortality rate [19,20]. We can list the known risk factors of strokes after CABG: chronic renal failure, recent myocardial infarction, previous strokes, known carotid artery disease, systemic arterial hypertension, diabetes, age greater than 75 years, moderate to serious left ventricular dysfunction, low cardiac output syndrome and atrial fibrillation [19].

It is essential that we manage to estimate which patients are more prone to these complications, especially as the surgical procedure can be modified, aiming at reducing these events.

After statistical analysis of the sample, we concluded that the model proposed by NNECDSG is adequate to estimate the occurrence of mediastinitis and strokes of patients studied in this sample.

In the current study, we identified the sample size to be a limiting factor. Nevertheless, we saw the possibility of applying a North American score to patients submitted to CABG in the Federal University of the Triângulo Mineiro, with the tool being easy to use in cardiovascular surgery. We stress that, even though the incidences of mediastinitis and strokes are higher in the studied population, these differences were not statistically significant.

With the small sample size of the current study and due to previously identified epidemiological and populational differences, as well as the lack of studies in Brazil on this subject, we believe that the attempt to create a Brazilian model, involving different institutions from the diverse regions of country, to predict postoperative morbidity is valid and desirable.