Objective: The papillary muscles and the chordae tendineae of both mitral leaflets contribute to the preservation of the left ventricular function. Most surgeons, however, routinely excise the anterior mitral leaflet. Methods: In a group of nine patients, six of them underwent mitral valve replacement alone and three underwent both aortic and mitral valve replacements, all the mitral apparatus was preserved. All of these patients had mechanical valves using CarboMedics cardiac prosthesis (CarboMedics, Inc. Austin, Texas). Results: There was no mortality. Postoperative echocardiographic assessment revealed maintained left ventricular function with no interference with the prosthetic leaflet mobility and no left ventricular outflow tract gradient. Conclusion: We believe that in most patients with long-standing mitral valve regurgitation, thinned out papillary muscles and elongated chordae tendineae that are not amenable to repair, valve replacement with the preservation of the entire native valve is possible and should be encouraged. This is especially valuable for those with depressed left ventricular function, who might otherwise suffer from left ventricular dysfunction in the long-term if the entire mitral valve apparatus were to be excised.
INTRODUCTION

The clinical improvement in patients who undergo mitral valve replacement for chronic mitral incompetence is related to an increase in cardiac output rather than improvement in left ventricular function [1]. On the other hand, in patients who undergo mitral valve repair for chronic mitral regurgitation, the left ventricular function appears to improve [2,3].

It would therefore appear from that observation that conventional mitral valve replacement (MVR) for chronic mitral regurgitation with prosthesis may be detrimental to the left ventricular function. With this information in mind, the value of preserving all of the mitral valve apparatus becomes apparent. There are many reports in the current literature that demonstrate the importance of retaining the subvalvular apparatus; as the integrity of the anterior and posterior leaflets and subvalvular apparatus contributes equally to left ventricular function preservation [4,5]. In addition, maintaining the papillary annular continuity has a proven advantage for left ventricular function [6,7].

The diagnoses were confirmed echocardiographically in all patients. Cardiac catheterization was performed in only one patient, who was 65 years of age to role out coronary artery disease. All of these patients, because of the chronicity of their disease, had depressed left ventricular function, and the average ejection fraction was 30%. The procedures are carried out through a median sternotomy, using moderate hypothermic cardiopulmonary bypass. The left atrium is opened after cross-clamping the aorta and induction of cardiac arrest by cold blood cardioplegia and topical ice slush for cooling.

The mitral valve is carefully inspected. The left atrial appendage is closed from within the left atrium. The potential for repair is thoroughly assessed, as it is always our first option. If the repair is ruled out then the anterior mitral leaflet is pulled out carefully to inspect it. An incision is then made few millimeters from the annulus along the anterior mitral ring as described by Miki et al. [8] (Figure 1). We have however added some modifications by incorporating the sutures to suspend the native valve into the prosthesis sewing ring. This decreases the bulk of tissue retained and therefore would help diminish the potential for interference with the prosthetic valve function. 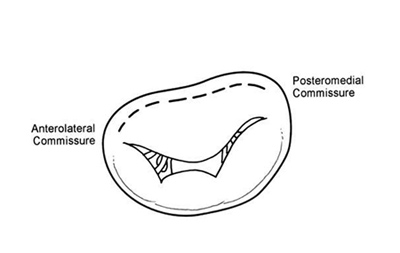 Fig. 1 - The mitral valve, dotted line is the area of incision in the anterior mitral leaflet

The anterior leaflet is divided in the middle into anterior and posterior parts. The area in the middle is usually devoid of chordae and is excised in order to debulk the unnecessary tissue so that decent size prosthesis could be used (Figure 2). The anterior and posterior parts of the anterior leaflet are re-attached to the mitral ring, near the anterolateral and posteromedial commissures, respectively, with 2-0 pledget-supported Ticron (Davis & Geck, Wayne NJ) sutures that are taken from the ventricular to the atrial side of the leaflet and slightly away from the free margin of the annulus (Figure 3). These sutures are left untied and are subsequently taken through the prosthetic valve ring along with the other valve sutures (Figure 4). The posterior leaflet is usually left as it is; on occasions it is incised in its middle vertically a few millimeters shy off the annulus so that proper size prosthesis can be used. When taking sutures in the posterior leaflet annulus the free edge of the leaflet should be included so that the leaflet is compressed between the prosthetic ring and the annulus and does not impinge on prosthesis causing it to malfunction. 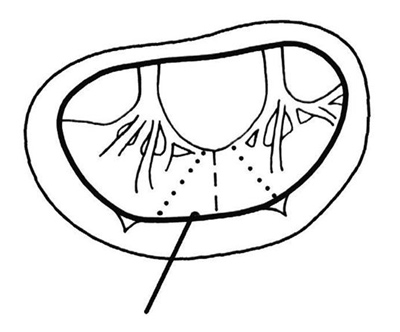 Fig. 2 - The anterior mitral leaflet is retracted by a hook. Chordae tendineae and papillary muscles of are shown. Dotted line is the chordae free portion to be excised 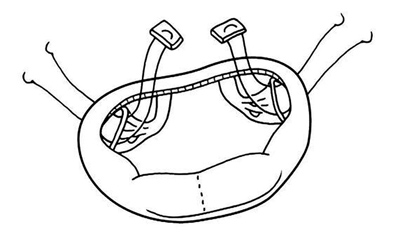 Fig. 3 - The anterior and posterior parts of the anterior leaflet are re-attached to the mitral ring near the anterolateral and posteromedial commissures 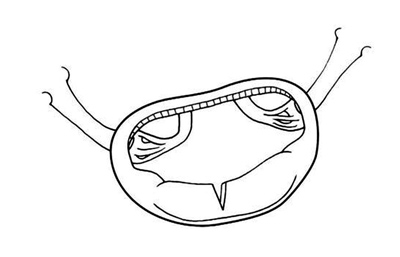 Fig. 4 - These sutures are left untied and are subsequently taken through the prosthetic valve ring along with the other valve sutures

The valve is sized and the implantation of the valves is carried out utilizing 2-0 pledget-supported Ticron (Davis & Geck, Wayne NJ) everting sutures. If the patient has both stenotic and incompetent lesions care should be taken in evaluating the feasibility of leaving the entire valvular apparatus behind. It is our experience that in such patients the mitral annulus is generally smaller than in pure chronic regurgitation and leaving the whole mitral apparatus behind may result in the utilization of a smaller prosthesis than desirable that could results in hemodynamic compromise.

Good judgment is called for in these situations. Orientation of the mitral valve is most commonly perpendicular to the anatomic position whereas the orientation of the aortic prosthesis is most commonly transverse with pivots at the midpoint of the non-coronary cusp and the commissure between the right and left cusps. Four patients received size 31 mm prosthesis and the rest were of size 29 mm one patient received a size 27 mm. The aortic valve sizes were 25 and 23 mm.

The surgery was uneventful there was no operative mortality. The duration of cardiopulmonary bypass and cross clamp was comparable in the entire group. All the patients were easily weaned off cardiopulmonary bypass and maintained excellent hemodynamic parameters. The cardiac index became higher after surgery. The pulmonary capillary wedge pressure (PCWP) decreased significantly in comparison with the preoperative values. Cardiac index improved in all patients. Comparison between preoperative and postoperative hemodynamic variables is shown in Table 1.

Postoperative echocardiographic assessment is routinely done just before discharge to assess the ventricular and prosthetic valve functions and to rule the presence of significant pericardial effusion. It is repeated six weeks later and is compared with the perioperative findings. These studies revealed significant decrease in LVDD and LVSD. There was in addition a significant reduction of the left atrial dimensions. The left ventricular ejection fractions were maintained without any deterioration. Echocardiographic parameters that were obtained six weeks after discharge are compared with the preoperative values in Table 2. There was no interference with the prosthetic leaflet mobility or left ventricular outflow tract gradient. 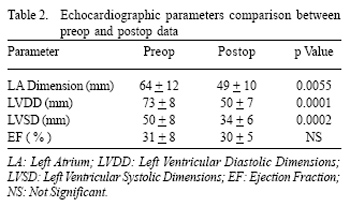 No instances of peri-valvular leak or intrinsic valvular dysfunction were observed.

The attachment of the mitral valve and the left ventricular wall through the papillary muscles and chordae tendineae has a major role in the left ventricular function. The papillary muscles play an important role in left ventricular contraction by drawing the mitral ring towards the apex, thereby causing shortening of the axis for the ejection of blood [9]. In the early sixties, Lillehei et al. [11] capitalized on this fact and suggested that the high mortality rate associated with MVR could be reduced by retention of the papillary muscles and chordae tendineae. He preserved the posterior leaflet during mitral valve replacement and noted a decreased incidence of postoperative low cardiac out put syndrome that used to plague early open-heart surgery. In addition, he also confirmed his prediction of a lower operative mortality in these patients [10]. The idea was greeted with skepticism by most of the prominent surgeons of his time and laid fallow for a long time. Around twenty years later, Hetzer et al. [11] became interested in Lillehei's technique utilizing tissue valve. This resurgence of interest was prompted because conventional MVR continued to be associated with a high prevalence of postoperative left ventricular dysfunction leading eventually to death. The most common cause of the late mortality is cardiac failure. Sporadic reports have since appeared in the literature describing the superior results of saving the entire valve apparatus. The crossed papillopexy technique in mitral valve replacement also seeks to preserve mitral valve apparatus and thereby preserves left ventricular function. On follow up it was found to lead to improvement of ventricular remodeling [12].

Once surgeons realized the importance of the mitral valve apparatus new innovative techniques have emerged to preserve it. Puig et al. [13] described a method in which both the anterior and posterior leaflets of the mitral valve were divided into hemileaflets. The resultant four pedicles were displaced under traction toward the left atrium and anchored between the mitral annulus and an implanted valvular prosthesis. What is interesting in the technique is that post operative Doppler echocardiography revealed evidence of LV remodeling in some of these patients, including lateral wall changes and a tendency of the LV cavity to return to its elliptical shape. The contribution of the Restore group [14] again reflects the important of preserving the subvalvular apparatus. They described a new surgical approach in patients with end-stage cardiomyopathy and severe mitral regurgitation who otherwise would be candidates for cardiac transplantation. It consists of implantation of a mitral prosthesis that is smaller than the annulus, and preservation and traction of the papillary muscles to reduce sphericity of the left ventricle [14]. The mid-term follow up revealed a relatively flat late survival curve, with evidence of improved clinical status, better echocardiographic parameters and reduction in ventricular sphericity.

The importance of preservation of the native valve and the attached chordae has eventually gained popularity. Chordal preservation appears to represent a significant departure from the trend of worsening results after conventional MVR [15], yet analogous to results associated with mitral reconstruction [16,17]. Nevertheless retention of the posterior leaflet with anterior leaflet resection is the more customary method of MVR this is probably for fear of left ventricular outflow obstruction by papillary muscles and chordae tendineae of the anterior leaflet [18] as is described in some isolated case reports. This has not been the experience of most [19,20] and indeed not ours. Chordal preservation during MVR for severe mitral regurgitation preserves left ventricular ejection fraction results in reduction of both LVSD and LVDD and improves the cardiac index. Mitral valve's apparatus preservation should be the procedure of choice in patients who require MVR for mitral regurgitation when mitral repair is not possible as repair should always be the first choice in any mitral procedure.