Surgical removal of a posttraumatic intracardiac foreign body in a child

The authors report the successful surgical removal of a foreign body (7 x 1 cm wooden stick) from the right atrial of a 8 year-old child 77 days after a transfixing chest trauma caused by falling over a fence. The clinical presentation was infective endocarditis confirmed by the presence of an intraatrial mass at echocardiography. The postoperative course was uneventful. At 6 months follow-up, the patient is in Function Class I (NYHA) and in complete remission of infection.

Posttraumatic intracardiac foreign bodies are rare and may cause heart tamponade, bleeding, embolia, infection, arrhythmias and valve dysfunction. Removal may be surgical or by percutaneous intervention, which, on failure, may result in high morbimortality rates [1,2]. In this report, the authors describe the late surgical removal of an intracardiac foreign body from a child after chest trauma.

The case of an 8-year-old male child, weighing 20 kg, who had suffered an accident 77 days prior to surgery, is reported. The child had fallen from a tree onto a fence, resulting in perforation and contusion of the chest at the 4th right intercostal space. He was submitted to chest drainage after evolving with prostration and sepsis with the necessity of antibiotic therapy and parenteral nutrition. Faced with the persistence of fever and with a linear echodense image in the right atrial at echocardiography, diagnosis of an intracardiac foreign body, possibly a fragment of a central venous catheter, was suggested. He was admitted in our service in a bad general state; pale, dyspneic, with weight loss, anicteric and afebrile.

A cardiovascular examination showed regular heartbeats, tachycardia, and normal phonetic heart sounds with systolic murmur (2+/6+) at a mitral focus. The heart frequency was 120 bpm and the arterial pressure was 90x60 mmHg. Chest radiography showed the pulmonary fields were clear and the heart area was normal. Electrocardiogram indicated sinus tachycardia without evidence of overload or hypertrophy.

Transthoracic echocardiogram demonstrated a linear echodense image with very little movement positioned across the right atrium (RA), between the septum (next to the outflow of the coronary venous sinus) and the RA lateral wall, which suggested a foreign body. Additionally, multiple moving filamentary images adhered to this possible foreign body were identified, which were compatible with vegetations.

After written consent was given by the mother, median thoracotomy was performed and diffuse fibrinous pericarditis was observed with a hardened nodular format in the free wall of the RA firmly adhered to the adjacent pericardium. After establishing normothermic cardiopulmonary bypass (CPB) and myocardial protection with cold blood cardioplegia, right longitudinal atriotomy was performed exposing a 7 x 1-cm piece of wood located along the chamber axis. This object was covered by a large quantity of fibrinous material. The distal end of the piece of wood was 0.5 cm from the coronary sinus and the proximal end at the base of the atrial appendix, fixed to the free wall of the RA.

Extensive fibrosis and thrombus were found and so part of the atrial wall needed to be removed. No intracardiac injury was identified. The right atrium was sutured on two layers using polypropylene 5-0 thread. The surgical procedure was concluded as is routine. The CPB time was 30 minutes and the myocardial ischemia time was 18 minutes.

The postoperative period was uneventful. A microbiological examination showed a growth of hyphae in the fibrinous material removed from the RA. After 14 days taking intravenous fluconazole, the patient was released from hospital in a good clinical state; in an afebrile and excellent nutritional state. At ninety days of follow-up the patient was completely free of symptoms, in Function Class I (NYHA) and without evidence at Doppler echocardiography of residual intracardiac injuries. 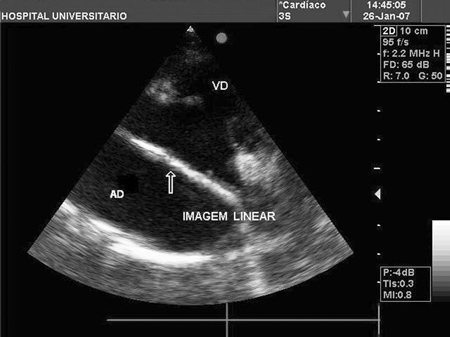 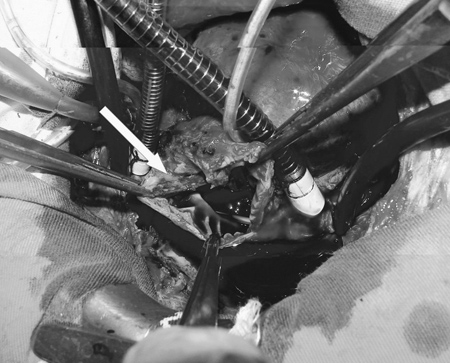 The penetration of a foreign body into the heart may result in both direct injuries to the organ and secondary embolization because of the peripheral penetration [3]. The most common intracardiac foreign bodies reported in the literature are fragments of central venous catheters, bullets and needles [1-5]. We did not find in the literature any report of the retention of a fragment of wood inside the heart.

Heart trauma is a rare finding in the pediatric population. The mean age of the series of Jiang et al. [1] and Actis Dato et al. [3] were 23.4 and 31 years old respectively, with a predominance of men.

The symptoms of the presence of a foreign body in the heart may be immediate or late. The immediate presentation is the result of the heart injury itself, which is accompanied by heart tamponade or bleeding. However, if the penetrating object did not injure the valves or the heart septa, the patient may remain asymptomatic for some period of time [3,4]. The findings of the current report are consistent with the literature in respect to the lack of acute symptoms as the foreign body did not involve the septa or the valve system.

Thus, the clinical symptoms may vary from no symptoms at all to severe hemodynamic instability. Consequently, diagnosis may be suspected after trauma or by chance during the investigation for another condition when the foreign body remains 'silent', particularly when the foreign body is situated inside the myocardium, but does not penetrate the heart cavity or remains only in the pericardial space [1,3].

The commonest symptoms are fever, pericarditis, pericardial effusions, arrhythmia, thrombosis and anxiety. The fever may result from infection of the pericardium or endocardium or of sepsis due to presence of infected fragments, as was demonstrated in this case, in which the foreign body was in prolonged contact with both the endocardium and pericardium, resulting in endocarditis and pericarditis [3].

Foreign bodies may be diagnosed using the clinical history, conventional radiology and echocardiography [1]. Chest radiography is adequate to provide the correct diagnosis of metallic foreign bodies however, it only provides qualitative evidence, without identifying the exact location of the object. It was not very useful in the diagnostic elucidation of the current case [1,4].

Transthoracic echocardiography has close to 100% sensitivity [1,5]. It offers information including the size, location, mobility and points of contact of foreign bodies. Moreover, it is a safe and rapid examination. Echocardiography demonstrated sufficient data in this case to provide the basis for surgical intervention.

Transesophageal echocardiography and computed tomography should be used only in the most stable patients and in those cases in which there is suspicion of foreign bodies affecting the great vessels [1,3].

The therapy must be specific after evaluating the risk of removing the foreign body. The treatment options include surgical removal, percutaneous intervention and watchful waiting [1-5].

Watchful waiting is reserved for asymptomatic patients, without associated risks or those diagnosed long after the trauma, especially if the foreign body is completely incorporated into the myocardium, pericardium or in the pericardial space [3,4]. Watchful waiting requires a meticulous clinical follow-up, using anticoagulation and prophylactic antibiotics [3].

On the other hand, asymptomatic patients with a foreign body diagnosed immediately after trauma with risk associated to infection, embolization or erosion or the heart structures, must be submitted to surgical removal or percutaneous intervention [2,3,5].

Percutaneous removal is indicated as an initial treatment in the presence of catheter fragments, but without rejecting the hypothesis of a future surgical intervention [3].

The presence of an intracavitary foreign body with systemic infection led to the surgical procedure in the current report, using median sternotomy as, in the literature, this procedure is considered to be a safe access, due to lower morbidity rates and reduced hospitalization compared to thoracotomy [3].

The criteria for using CPB during the surgical removal of intracardiac foreign bodies depend on the time interval between the accident and diagnosis, on its exact location and its relationship with the heart cavity [3].

In the series of Jiang et al. [1], only two of 11 patients used CPB, however, the mean time between trauma and diagnosis was 10.1 days. In the current report, the time between the trauma and the surgery was 77 days; therefore, any attempt without CPB would involve a high risk as the foreign body was firmly adhered to the pericardium and to the atrial endocardium and it was covered by a large amount of contaminated fibrinous material.

In conclusion, with penetrating chest injuries it is important to investigate the pericardium and heart to exclude their possible involvement and foreign bodies, as early diagnosis improves the chances of successful surgical resolution.