Syphilis is an infectious disease occurring through a series of frequently overlapping stages. It can impair the cardiovascular and neurological system. In 30% of the non treated patients, syphilis develops your tertiary form. We report a case of a 46-year-old male patient admitted due to edema pulmonary and acute coronary syndrome with left bundle branch block, submitted to fibrinolytic therapy successfully. Coronary angiography showed a 90% ostial lesion of left main coronary artery and occlusion of the right coronary artery ostium. VDRL was titrated to 1/128. The patient was undergone to CABG and was discharged after treatment with crystalline penicillin.

Syphilis is an acute infectious disease transmitted mainly by direct contact, usually through sexual intercourse. It can have many clinical manifestations in its various phases [1]. Syphilitic aortitis and especially coronary artery ostial lesions with a normal distal bed are infrequently manifestations seen currently [2]. Ostial lesions uncommonly cause acute myocardial infarct [3]. Although cardiovascular syphilis is not a common condition, it should be considered in cases of ostial lesions alone.

We report a case of a 46-year-old male patient without risk factors for atherosclerotic coronary artery disease admitted because of acute pulmonary edema and the likelihood of ischemic heart disease (myocardial ischemia). Coronary angiography showed a 90% ostial lesion in left coronary artery and occlusion of right coronary artery ostium. FTA-ABS was reagent and VDRL titers were 1/128. The patient underwent coronary artery bypass grafting (CABG) and he was discharged after antibiotic therapy using crystalline penicillin.

We report a case of a 46-year-old male patient admitted with a clinical picture of rapidly progressive dyspnea started at rest and associated with cold sudoresis and whistling rale in the chest. The patient, a former smoker, denied other pathological personal antecedents.

On physical examination at admission, the patient presented with blood pressure of 130/70 mmHg, heart rate of 143 beats per minute, respiratory rate of 29 breaths per minute, with an oxygen saturation measured through pulse oxymetry of 74% and crackling on pulmonary auscultation in all pulmonary fields.

Electrocardiogram showed a left bundle-branch block, which was supposed to be recent and the acute pulmonary edema (APE) was considered to be secondary to ischemic heart disease, being the patient undergoing to fibrinolytic therapy with streptokinase (SK) three hours before the onset of symptoms, which cause the reversion of both clinical pulmonary picture and stabilization. 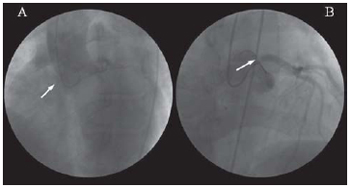 The patient denied having sexually transmitted diseases (DST) or undergoing any specifically treatment, if any, at the best of his knowledge. VDRL was reagent in titers of 1/128 and FTA-ABS was reagent. Serologies for rheumatoid factor, antinuclear factor, hepatitis B and C, and HIV were not reagent. The analysis of the cerebrospinal fluid showed VDRL, hemagglutination, and indirect immunofluorescence were not reagent.

Treatment started with intravenous crystalline penicillin in a dose of 24,000,000 IU/day and exacerbation of lesions was not seen. The patient underwent an on-pump coronary artery bypass grafting with an intraaortic balloon and left internal thoracic artery grafting to the anterior descending artery, and saphenous grafting to both first left marginal artery and right coronary artery. The procedure was free of surgical complications.

Anatomicopathologic study of the aorta fragment harvested at the procedure showed inflammatory reaction with perivascular (vasa vasorum) lymphocytic infiltrate, which is compatible with syphilitic aortitis (Figure 2).

The echocardiogram did not show changes regarding preoperative examination. The patient was discharged after a 21-day treatment with intravenous crystalline penicillin. He was asymptomatic from the cardiovascular standpoint and with a good clinical evolution of the surgical wound.

In the present case, the presence of an ostial lesion on coronary angiography has raised a suspicion of syphilitic aortitis in a patient without risk factors for atherosclerotic coronary disease. Although there has not been a previous history of DSTs, the diagnosis of syphilitic aortitis with coronary ostium impairment was made due to the presence of high titers of VRDL and positive FTA-ABS, besides angiographic and histopathologic findings compatible with the disease.

Syphilis is an infectious disease occurring in sequential stages, remaining latent for several years. In its tertiary manifestation can affect both neurologic and cardiovascular systems [1]. In approximately 30% of the untreated patients, tertiary syphilis manifests between 10 to 30 years after the primary infection [4].

In an analysis of 2,105 angiographies of patients with coronary artery disease, Thompson [6] found an incidence of 0.14% bilateral ostial lesions without distal coronary bed disease. All women with VDRL were non-reagent.

In the manifestation of tertiary syphilis, the aorta is affected in nearly 50 of the cases. Sacculated aneurysms and coronary ostial stenosis remains the most common manifestations of syphilitic aortitis [7].

Although syphilitic aortitis and mycotic aneurysms represent most of all aorta inflammatory disorders in autopsy reports [5], they have been relatively uncommon in surgical pathologic series as seen in the study by Homme et al. [2] performed on 513 consecutive patients with surgical resection of ascending aorta, where arteritis have macroscopically been found in 6.4% and microscopic findings compatible with aortitis were found in 11.1% of the patients. In none of the cases syphilitic aortitis was diagnosed.

Coronary ostial lesion can be seen in as many as 26% of the patients with syphilitic aortitis, however, it is uncommon for such ostial lesion to lead to acute myocardial infarction [3,8,9]. Patients with bilateral coronary ostial lesion but no distal coronary artery disease and those with ascending aorta aneurysms should be screened for syphilis. Although the low association with cardiovascular syphilis, a cerebrospinal fluid examination is recommended to rule out neurosyphilis. In addition, screening for other sexually transmitted infections, including HIV, should be considered [10].

Although less frequent, syphilitic aortitis should be suspected and screened in patients with coronary ostial lesions.

1. Clark EG, Danbolt N. The Oslo study of the natural history of untreated syphilis; an epidemiologic investigation based on a restudy of the Boeck-Bruusgaard material; a review and appraisal. J Chronic Dis. 1955;2(3):311-44. [MedLine]