The superior left vena cava with the absent superior vena cava is a rare abnormality, especially when associated with total heart block. We report a case of a patient in which the presence of superior left vena cava and the absence of the superior vena cava was detected during the implantation of a pacemaker for the correction of a total heart block, which led us to use a different technique for the fixation of the ventricular electrode. To confirm the supposed absence, several image exams were made showing the difficulty on the diagnosis of the described syndrome.

It is typically asymptomatic and often detected during or after the placement of pacemaker catheter via subclavian or jugular venous routes [1]. However, it can be detected incidentally during a chest computed tomography (CT) screening or even through a necropsy finding [2]. The significance of the persistence of the left superior vena cava is based on it high prevalence when associated to cardiovascular congenital defects and arrhythmia. Persistence of the Left superior vena cava was found in 20% of the cases of patients with tetralogy of Fallot and in 8% of the patients with Eisenmenger syndrome [1].

The patient was a 52-year-old woman who has reported to have started a clinical picture of dyspnea to mild physical exertions a decade ago. Over the years she started to present a intermittent pain in the lower limbs associated to cold, painless, evening edema. She visited the cardiology outpatient clinic due to worsening of the dyspnea clinical picture. On consultation, a routine electrocardiogram was ordered. The electrocardiogram showed a complete atrioventricular block. She was referred to the city hospital where she lives to diagnosis, prognosis, and hospitalization established. On physical examination at admission, she presented with blood pressure of 220 x 110 mmHg, heart rate of 60 beats per minute and absence of low cardiac output signs.

The patient length of hospital stay was 5 days. Due to the atrioventricular block she was referred to a reference hospital in Nova Friburgo to have a definitive cardiac pacemaker implanted. During the procedure, there has been a difficulty in introducing the pacemaker catheter through right subclavian vein. It was detected the presence of a left superior vena cava and occlusion of the right superior vena cava. The ventricular electrode was inserted through this route with a C-shaped guidewire. A definitive generator pacemaker unit, VVI type, was implanted. The operative diagnosis was complete atrioventricular block.

After 2 weeks of the pacemaker placement, the patient came to the hospital complaining of intense dyspnea, now to mild physical exertion, and sometimes at rest. A new pacemaker evaluation was ordered. At the time no changes were found.

She came to the cardiology outpatient clinic with the same complaints in former times. On physical examination, there was no evidence of significant change. Electrocardiogram and echocardiogram were ordered for further diagnosis clearing. The echocardiogram disclosed no evidence of any change that justifies the patient's clinical picture; the electrocardiogram evidenced a retrograde P wave which led to a suspected pacemaker syndrome. The patient was referred to an arrhythmologist for further consultation. A computed angiotomography was performed in order to highlight the suspected congenital anomaly. This test disclosed the presence of a dual persistent superior vena cavae (Figure 1). 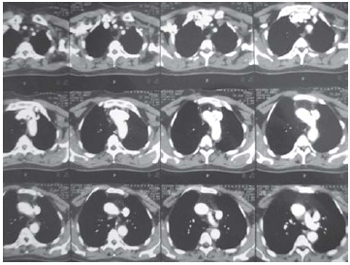 On consultation, pacemaker syndrome was confirmed by the arrhythmologist 5 days later. Pacemaker change was suggested. Based on this new diagnosis, the surgical team decided to implant a dual-chamber-rate-adaptive-pacemaker (DDDR). Due to the difficulty of implanting the first pacemaker, it was chosen to perform a right cardiac catheterism before changing the pacemaker, which has evidenced the persistence of left superior vena cava opening into the coronary sinus (Figure 2). 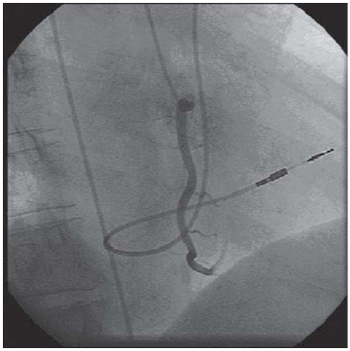 Fig. 2 - Passive-fixation ventricular electrode inserted into RV through a marked curvature in RA due to its passage through left superior vena cava

There are some theories concerning the etiology of a complete atrioventricular block associated to the persistence of left superior vena cava. The association between left superior vena cava and abnormal rhythm patterns may be more than chance [4]. Once the diagnosis of complete atrioventricular block was made, it was chosen to implant a ventricular-pacing pacemaker. During placement of the pacemaker there has been some difficulty in advancing of the catheter via subclavian vein. There was no passage in the level of normal vena cava. Regarding the routinely previous technique it was chosen a different technique to implant the pacemaker. It was used a C-shaped catheter.

Placement of a permanent catheter into the right ventricle through left superior vena cava and coronary sinus is technically very difficult through conventional methods. Failures reaching a satisfactory position into the right ventricle have been described in these patients. The successfully use of a J-shaped arterial stylet was shown as a new technique to placing the pacemaker catheter into these patients' ventricle [5].

In another study a technique using an stylet, which was manually given a C-form, making an acute angle during its passage through left superior vena cava, coronary sinus, and finally falling into the right atrium was described [5]. It was the same technique used in the present case.

After the implant of the pacemaker, the patient presented recurrence of the following symptoms: dyspnea, syncope, and presyncope, with worsening of the clinical picture. She was referred to the arrhythmoplogist who suggested changing the pacemaker due to the diagnosis of pacemaker syndrome.

Pacemaker syndrome presents classically with giddiness, dyspnea and/or syncope, which can be associated with hypotension established or aggravated after the placement of the pacemaker, usually the ventricular-pacing pacekamer [6]. The diagnosis was made due to the patient's clinical improvement.

The surgical team chose to implant an atrioventricular-pacing pacemaker through a dual-chamber-rate-adaptive-pacemaker making the generator unit replacement. A right cardiac catheterism was performed in order to confirm the chest angiotomography findings. The cardiac catheterism was performed aiming at simplifying to visualize the venous route to be followed by the pacemaker catheter and to confirm the diagnosis of congenital anomaly.