1 year and 7 months old male child, 11kg, from Olimpia (SP). Referred to the Department of Pediatric Cardiology in São José do Rio Preto for investigation of heart disease.

Clinical history of fatigue since the three months, with tachypnea under efforts, bronchospasm and difficulty in gaining weight. With 1 year of age he was admitted to the Intensive Care Unit of Pediatric Cardiology (UTICP) for presentation of bronchospasm and severe tachypnea, showing signs of decompensated congestive heart failure (dCHF).

On physical examination, the patient was in regular general state, ruddy, hydrated, dyspneic and afebrile. The heartbeat was regular with two clicks, without murmur. Lung auscultation revealed bilateral vesicular murmur, with breath sounds in the bases. In the abdomen, hepatomegaly called our attention. Blood pressures and pulse were normal in four limbs without edema.

After further examination, it became clear the diagnosis of non-compacted myocardium and thrombi in the left ventricle (LV), and we initiated measures for the treatment of dCHF and vigorous anticoagulation. During this hospitalization, the child presented an episode of cardiac arrest, but without sequelae.

All medications for the treatment of dCHF were optimized but the child still presented constant admissions due to severe myocardial dysfunction. After four months in UTICP under intravenous vasoactive drugs and numerous additional tests, it was possible to perform cavitary transplant. 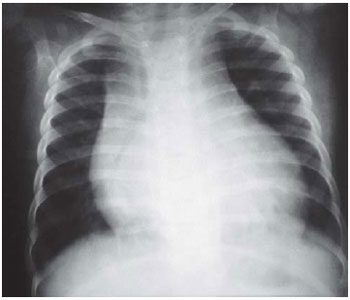 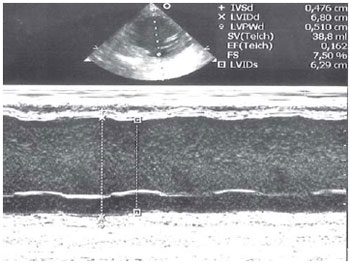 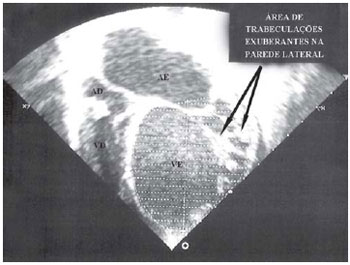 Fig. 4 - Preoperative echocardiogram at apical cut showing a significant dilation of the left cavities and area of trabeculations suggestive of non-compacted myocardium at the side wall of the left ventricle

The worsening of clinical symptoms, including constant need to stay in UTICP and use of vasoactive drugs, besides the presence of thrombi in the LV, which embolized causing ischemic stroke in children without neurological sequelae and the exclusion of myocarditis with 67 negative gallium scintigraphy, and the low pressure in the pulmonary artery, among others, allowed the indication of cardiac transplantation[1].

The operation, first performed in our Service, was performed with the donor and recipient in parallel operating rooms.

The donor, female, 1 year and 3 months old, 10kg, underwent a transternal median sternotomy, pericardium opening, analysis of cardiac structures and their extensive dissection. After this assessment, which complemented the previous echocardiogram, while the liver and other organs were prepared for simultaneous withdrawal, the same team began thoracotomy in the recipient, with confection of purses, heparinization and introduction of cannulas in the aorta and vena cava.

With the recipient ready to start cardiopulmonary bypass (CPB), the team returned to the donor child's room and performed the withdraw of the heart, which was protected with cardioplegic solution HTK (Custodiol ®).

With the organ in the recipient, properly protected in cold 0.9% saline solution, it was initiated the preparation of the heart to be implanted and immediately the CPB, and removal of the diseased organ (vídeo 1), which was subsequently referred to analysis in the laboratory of pathology, confirming the diagnosis of non-compaction of the myocardium (Figure 5). 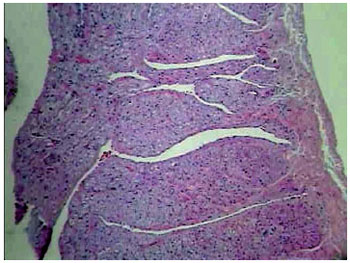 The procedure performed was bicaval orthotopic heart transplantation as a routine method in the largest center for infant heart transplantation in our country[2], initiating the anastomoses at the left atrial appendage, left atrium, inferior vena cava, superior vena cava (SVC) ,pulmonary artery and aorta. The SVC of the donor was lower than the SVC of the recipient and needed to be enlarged. The other vessels had compatible diameters. In all sutures nonabsorbable 5-0 and 6-0 polypropylene wires were used. At 28ºC, the CPB time was 80 minutes and 75 minutes of myocardial ischemia (Figure 6/vídeo 2). 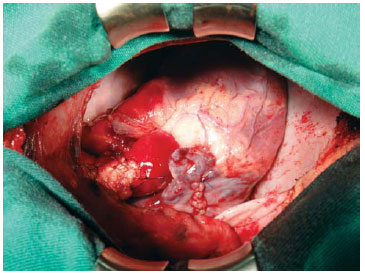 Postoperatively, the patient developed uneventfully, using only isoproterenol and was extubated after 3 hours in UTICP.

Clinical controls with the aid of additional tests and hemodynamic study with endomyocardial biopsy did not indicate any sign of rejection up to now[3].