LETTERS TO THE EDITOR

Radius of the vessel, resistance and coronary flow

Radius of the vessel, resistance and coronary flow


I would like to make some comments regarding the recent article published in BJCVS: Concepts of basic physics that every cardiovascular surgeon should know. Part I - Mechanics of fluids. Rev Bras Cir Cardiovasc. 2010, 25(1):1-10.[1].

The article comments on flow inside tubular conductors that stenosis with 50% of the diameter of a coronary artery will be reduced by 94% of its flow. This assertion was based on the Hagen-Poiseuille equation, which shows that the flow is inversely proportional to the length of the tube and the viscosity and directly proportional to the fourth power of the radius and the pressure difference between the ends. Throughout the text, there are comments on the vascular resistance of the entire coronary circulation system, but it is not commented on the relative importance of each segment.

The statement of reduced coronary flow of 94% with a stenosis of 50% is mistaken because this equation must take into account all the resistance of a series of tubes. To demonstrate this misconception, it is first necessary to introduce some concepts that unfortunately were not mentioned in that aforementioned article.

The first concept is that of coronary flow reserve. "The coronary flow can increase 4-5 times in relation to basal flow during exercise or use of vasodilator drugs. This increased flow is called coronary vascular reserve. The peak flow at any level of perfusion pressure is essentially function of the sectional area of resistance vessels. The lower the number, or the caliber of the resistive vessels, the lower coronary reserve" [2].

The second concept is of the regulation of coronary circulation. "The coronary flow depends directly on the pressure difference between the arterial side - aorta - and venous side - right atrium. However, the flow varies inversely with the resistance offered by coronary arteries and the adjacent structures. Under normal conditions, the total coronary resistance depends mainly on the small vessels, especially arterioles, while the large epicardial coronary arteries are responsible for only 2% to 5% of the total resistance. The regulation of coronary flow occurs through extrinsic factors to the arterial bed and other factors that influence intrinsically the tone of the coronary arteries"[3].

Finally, with respect to the concept of coronary reserve and fixed obstructive lesion, I would like to make some comments. In developing a coronary lesion, "the strength of the large vessel, usually very low, rises and becomes a significant fraction of the total resistance of the series. In these conditions, the adjustment of self-regulation acts and influences arteriolar resistance to maintain the proper ratio flow/myocardial oxygen demand. In other words, as the epicardial artery resistance increases as function of the higher degree of stenosis, the arteriolar resistance decreases to maintain the total resistance (and hence flow) at normal levels. But this process of vasodilation has limits, so that there comes a point where further increases in stenosis leads to decreased flow". "An obstruction of the arterial lumen (coronary) of 50% to 60% is compatible with appropriate irrigation at baseline, due to arteriolar vasodilation. But in this situation a part of the vasodilator reserve is being used to maintain the basal flow. As a result, for an exercise that determines an increase in coronary blood flow three to four times, the flow ceases to be sufficient. Therefore, in the presence of more intense exercise, even with a less severe stenosis, we are faced with an inadequate response to flow coronary, with clear signs and symptoms of myocardial ischemia[4].

Another question not approached by the article that raises doubts in the surgeon is the aspect of the flow of isolated and sequential grafts. The patients who underwent coronary artery bypass grafting are usually due to multivessel disease. The proven superiority of internal thoracic artery (ITA) to anterior descending (AD)[5] has led the authors to prefer to use arterial grafts[6,7]. The use of sequential grafts aims to optimize these grafts. But the issue that concerns surgeons is precisely the flow in this type of graft. We have seen that the main source of resistance is after the major epicardial arteries (more than 95% of the total resistance of the system). We also observed that the maximum flow, at any level of perfusion pressure, is essentially determined by the sectional area of resistance vessels, that is, the more capillary the bed, the greater the flow through the graft. Nordgaard et al.[8] performed a study on the flow of isolated saphenous vein grafts, double sequential saphenous vein and triple sequential saphenous vein and showed that the average flow was respectively 50ml/min, 69ml/min and 81ml/min, with significant difference. Therefore, the flow of the graft is increased in proportion to the number of arteries approached sequentially.

A final aspect of sequential arterial grafts, especially the LITA is in relation to the degree of stenosis of the native bed. If the diagonal or the AD has only a moderate injury, there is an important flow competition with the native bed, increasing the chance of partial or total failure of the graft. However, in the presence of lesions of at least 70% in both native beds, the patency of the sequential LITA is similar to isolated LITA to AD[9].

The concepts of basic physics are fundamental, but one should be careful about their use in complex models such as the cardiovascular system.


I thank for reading and critical evaluation of Full Professor Roberto Rocha e Silva and especially for the opportunity to broaden the focus with regard to fluid dynamics applied to the physiology of the coronary system, which was not in the study's objective. It is a topic of great importance and deserves to be discussed.
The Hagen-Poiseuille formula is useful when analyzing both an arterial segment as well as it all, from the aorta to the right atrium, or coronary ostium to the coronary sinus, since the formula variables are allocated properly. It becomes easier when we replace the equation IX[1] in VIII[1], which results in:

Supposing there is an obstructive lesion in the epicardial coronary artery, with the opening of the coronary arteries of resistance, resultin in a fourfold increase of the coronary blood flow. Figure 1 mathematicizes this scenario.
The flow in F4 is four times bigger than in F2, but F4 is 16 times smaller than F3, or that is, F4 has flow of 93.75% lower than F3. 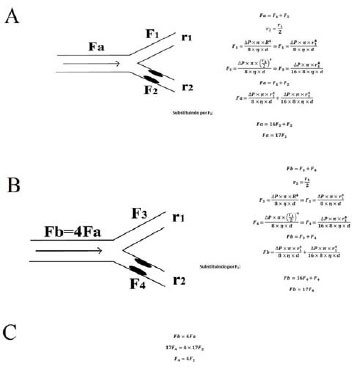 However, when the dilations of resistance coronaries are processed preferentially in the ischemic area, there is predominant increase of the flow through this blocked vessel, by featuring the self-regulation.
When undergone to physical exercise, there is both openness of such coronaries and increase of myocardial oxygen consumption by increasing both the chronotropism as cardiac inotropism, which usually results in pain.
Regarding sequential anastomosis, when we add one or more vessels to the graft, we add to the first the rays and length of this new tubular system. As we know from the formula [1,2], the radius has larger expression, as it is raised to the fourth power, the resulting total resistance is smaller than if it was revascularized only one arterial bed, increasing the flow through the graft, explaining the results obtained in the study by Nordgaard et al. [3].
When we have two vessels without significant obstruction that irrigate the same arterial system, making the hypothesis that blood pressure is the same for both, the flow will be inversely proportional to the resistance of the upstream segment of the anastomosis, since the resistance is the downstream same for both (in the same arterial territory). This division of flow leads to proportional reduction of speed (equation VII [1]), leading to thrombosis.
Through this study I did not want to close the discussion of the application of physics, but, instead, instigate it. Even this discussion is not closed. Each topic that we chose to lecture in our article could be unfolded and each one would lead to a different study.
The acquisition of knowledge is a complex process, however summative and the history of its growth is still being told and probably never will end. I am very happy that our study has drawn the attention and I invite our readers to expand these studies in the form of letters to the editor or other original articles.