OBJECTIVE: The authors sought to assess biochemical, hormonal and cellular repercussions from use of cardiopulmonary bypass (CPB) in coronary artery bypass graft (CABG) surgery.
METHODS: Eighteen patients underwent on-pump CABG surgery. Mean time of CPB was 80.3 minutes. Hormonal, biochemical and cellular measurements were taken in some time points - preoperatively, immediately after coming off CPB, 24 and 48 hours postoperatively. Friedman and Wilcoxon tests were applied based on significance level of 5%.
RESULTS: There was activation and significant elevation of total leukocytes and neutrophils count over CPB, remaining this way up to 48 hours postoperatively. Total platelets count, in turn, was marked by relevant reduction immediately after coming off CPB as well as in two postoperative time points. Serum levels of total proteins and albumin, immediately after coming off CPB and also in two postoperative time points, were significantly decreased comparing with preoperative status. There was remarkable reduction of total T3, free T3 and total T4 particularly up to first 24 hours postoperatively.
CONCLUSION: In on-pump CABG surgery, inflammatory effects encompass activation of total leukocytes, neutrophils and platelets, reduction of serum level of total proteins and albumin and decreased thyroid hormones levels, especially within first postoperative 24 hours.

The pathogenesis of the inflammatory response triggered by CPB is multifactorial. Thus, there is synergism between various pro-inflammatory mechanisms, culminating in violation of homeostasis. Harmony usually between biochemical, hormonal and cellular processes, can be corrupted by pathological events related to the CPB, such as endothelial injury, ischemia-reperfusion, and especially pronounced release of cytokines, adhesion molecules and tissue necrosis factor [1].

Several studies have demonstrated that endothelial dysfunction during CPB is derived mainly from the interaction between neutrophils and inflammatory molecules by activated endothelium. As a direct result of this interaction, there is deficient regulation of the process of transendothelial migration of neutrophils. Thus, during CPB, there are increased numbers of neutrophils, as well as activation of them, which, in an uncontrolled manner, migrate from the circulation to the tissues, promoting various regional and systemic events. Similarly, stimuli derived from cell adhesion molecules promote the migration and displacement of platelets from the circulation into the various tissues [2,3].

In recent decades, some authors have assessed the biochemical and hormonal effects related to CPB. With regard to biochemical events, considerable emphasis has been given to the serum concentration of total proteins, particularly albumin, as these are essential in maintaining the balance and colloid osmotic regulation of vascular permeability in prime areas such as blood brain barrier. With respect to hormone, thyroid hormones and its variability over the CPB have been the target of the latest research preciput [4,5].

The aim of this study is to assess the impact of the use of CPB in CABG, from the standpoint of the biochemical, hormonal and cellular impact.

After approval by the Ethics Committee of Federal University of São Paulo, according to the Declaration of Helsinki, 18 patients, 13 (72%) male and five (28%) females, underwent myocardial revascularization using CPB (pump driving roller type) on an elective basis. These patients underwent surgery by the same surgical team using aortic and right atrial cannulation, mild hypothermia and blood cardioplegia. The average age of patients was 57.8 years and average duration of CPB, 80.3 minutes. The selection of patients for CABG with CPB was based on the number of grafts and need for revascularization of the left ventricle lateral wall.

From the statistical point of view, we applied the Friedman test to check possible differences between the four moments of observation, and Wilcoxon Signed rank test to identify the moments that differ from each other, when taken as pairs. It was adopted the significance level of 5% for implementation of these tests. SPSS (Statistical Package for Social Sciences), in its version 13.0 was used to obtain the results.

The information contained in Tables 1-5 result from the application of the Friedman test, and the data are expressed as mean value, standard deviation, minimum and maximum values, median, quartiles and significance level. It's important to note that these tables provide substrates for the simultaneous comparison of the four moments of observation considered in this research.

In cases where the Friedman test showed significant differences between the four times studied, we applied the test of Wilcoxon Signed rank test, which aims to define correlations between different times, taken as pairs, and were relevant to the respective variables. Based on this final step of statistical analysis, we can effectively understand the behavior and the evolutionary course of biochemical, hormonal and cellular variables, from preoperative up to 48 hours postoperatively. Figures 1-3 illustrate these correlations between different times, in pairs, but also the significance levels found. 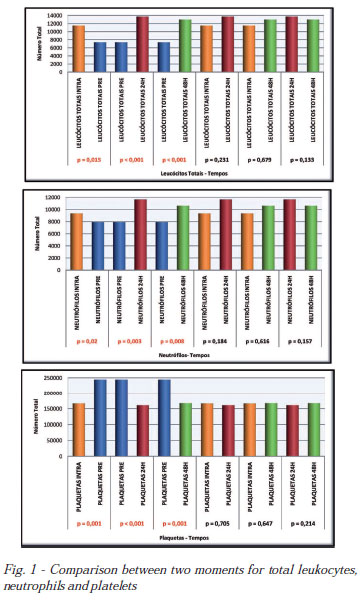 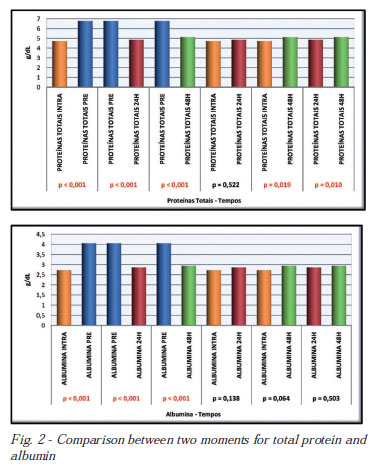 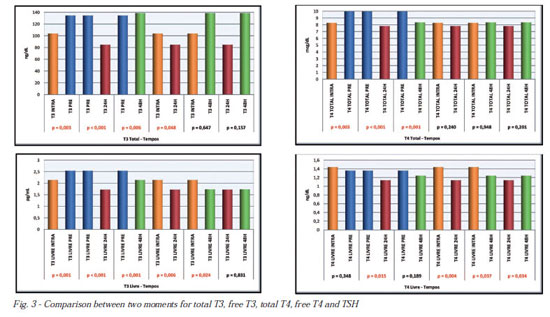 There was significant rise of total leukocyte and neutrophil counts in the postoperative, unlike the total count of platelets, which showed considerable decrease in those moments of observation. The serum concentration of total protein and albumin was characterized by decreasing levels in the postoperative, with the stabilization of the total protein levels occurring as early as possible in relation to levels of albumin. We noticed significant decrease in levels of thyroid hormones, particularly in the first 24 hours postoperatively.

Despite some technical advantages of the use of CPB in CABG surgery, its inflammatory effects should be systematically taken into account to obtain a satisfactory postoperative result.

The inherent systemic inflammatory response to CPB is responsible for a variety of organic changes, among them the inadequacy of serum total protein and albumin, serum imbalance of thyroid hormones and qualitative and quantitative changes regarding total leukocytes, neutrophils and platelets [6,7].

The interaction between neutrophils and the endothelium depends on the action of some integrins and cell adhesion molecules such as ICAM-1 [8]. Chen et al. [2] in 2004, demonstrated, through clinical study involving patients undergoing cardiac surgery with CPB, that the release of inflammatory substances during CPB corrupts the transendothelial migration of leukocytes and platelets, with subsequent disordered displacement of these cells to the tissues.

The results of our study revealed that there was significant activation and increase in the number of total leukocytes and neutrophils during CPB, so that this condition was detected soon after the CPB, remaining so until 48 hours postoperatively. The comparative analysis between the total number of leukocytes and neutrophils, in the preoperative was significantly lower than the respective values found after weaning from CPB, but also with 24 and 48 hours postoperatively. The total number of platelets, in turn, was characterized by significant decrease after the CPB, but also in the two periods of postoperative observation, when compared with the total platelet documented in the preoperative phase. It should be noted, therefore, that the transendothelial migration of platelets from the circulation to the tissues occurred as early as possible in relation to total leukocytes and neutrophils.

Data recently obtained from an experimental study developed by Okamura et al. [9] showed that ischemia-reperfusion and the resulting inflammatory effects of CPB are determinant in the impairment of vascular permeability and viability of organic barriers such as the blood brain barrier. The immediate consequence of this dysfunction is significant change in serum total protein and albumin in relation to their concentration in other body fluids.

Changes in renal function after CABG with CPB are emphasized in some studies. Endothelial injury that is stablished within the renal arteries and glomeruli is the main issue of this complication [10,11]. Our results showed stability of serum creatinine over the four periods of observation, noting not even significant differences between the studied moments, when taken as pairs. This finding tends to be greatly influenced by the duration of CPB and this may have been the factor that, in our study, did not promote significant changes in renal function.

The main studies correlating inflammatory effects of CPB with thyroid hormone levels revealed that the fractions of total and free T3 (triiodothyronine) tend to decrease in the post-CPB, whereas the concentrations of TSH (thyroid stimulating hormone), T4 (total thyroxine) and free T4 levels tend to remain stable. It has been assigned to this standard of hormonal variation, the concept of euthyroid syndrome. The most important pathophysiological mechanism in the occurrence of this profile is the thyroid hormone molecule reduced conversion of T4 to T3 the active component [12-14]. Taylor et al. [15] have argued, since the late 70s of last century, that some aspects inherent to CPB may contribute to the changes of the thyroid hormone profile, such as hemodilution, hypothermia, and nonpulsatile flow. Among these, the most noted in the literature as effectively determining has been the nonpulsatile flow. Ohri et al. [16] have shown that changes in thyroid hormone levels are likely to detect the immediate postoperative period, since at this stage, there is an active state of catabolism associated with high rates of oxygen consumption [17-20]. Some authors have postulated that the decrease in thyroid hormones in the post-CPB favors the occurrence of global myocardial dysfunction and arrhythmias, especially atrial fibrillation [21-25].

In our study, there was marked decrease in serum total T3 and free T3, especially through the first 24 hours postoperatively. Similarly, we observed a similar pattern as the serum total T4. However, regarding the free fraction of T4, the results did not show the same pattern, since there was stability of their serum levels immediately after cessation of CPB and only significant decrease in the first 24 hours postoperatively.

Given the results, this study provided information that attest to the impact of the use of CPB in CABG surgery, with respect to some biochemical, hormonal and cellular parameters. The results allow us to suggest that in coronary artery bypass grafts, the inflammatory effects of CPB include activation of leukocytes, neutrophils and platelets, reduction in serum total protein and albumin and decreased serum levels of thyroid hormones, especially in first 24 hours postoperatively.