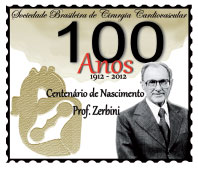 On May 7, 2012, will be the 100th anniversary of the birth of Euryclides de Jesus Zerbini. The centenary of the master of the Brazilian cardiac surgeons will be celebrated with full honors by the Brazilian Society of Cardiovascular Surgery (BSCVS) and of course the Brazilian Journal of Cardiovascular Surgery (BJCVS) could not fail to participate in this festive moment not only for cardiovascular surgery, but for Medicine and Science in Brazil, so well represented by the unique figure of Professor Zerbini. The covers of the 2012 editions will bring a stamp commemorating the anniversary.

In this edition, we bring a Special Section with three articles that describe some of the brilliant career of Professor Zerbini, told by people who had the pleasure to live and learn from him. Moreover, we republished, at the opening of this Special Section, a text published in the Archives of Cardiology in 1996, which tells the story of heart surgery and gives an idea of the panorama of our specialty at the time Dr. Zerbini performed his hard and pioneering work. All writings demonstrate how was the day-to-day difficulties, challenges and victories of Zerbini and other pioneers, in a time when cardiac surgery was still crawling in Brazil. If it were not so that, he would not have performed the feat of making the first heart transplant in our country a few months after Dr. Christiaan Barnard have performed the pioneering procedure in South Africa.

Professor Zerbini never forgot that teamwork is the key to success, always giving freedom to the members of his staff could grow professionally and encouraging them to create their own heart surgery services, which today are present in the capital and spread to all major cities in the interior of Brazil. We are all, by birth or adoption, disciples of Professor Zerbini and we feel honored to follow up its pioneering.

This edition also brings several articles covering different areas of cardiovascular surgery, which add new data and knowledge, always useful for the development of our area. I highlight the profile of Dr. Luis Roberto Gerola, who left us so early, at age 51, on December 11, 2011 (p. 175). Written masterfully by Professor Luiz Eduardo Vilaça Leão, it certainly will thrill all those who had the pleasure of living with this talented cardiovascular surgeon.

In addition to worrying about the content, BJCVS not leave out the visual aspect, trying to make reading more enjoyable and easy. The Portal of BJCVS (the homepage of the www.rbccv.org.br website) has been completely renovated, with modern and clean look, bringing new tools, which were being tested for a long period to ensure its safety and usefulness. By accessing the Portal, colleagues will find thumbnails of the journal's cover, in Portuguese and English, to be read in tablets, iPhones and the like, using EPUB technology, or in conventional computers, using the FLIP technology. Both allow you to flip through the journals as if they were printed, with the advantages of state of the art in this challenging field. Pagination is equal to the print journal, with the full articles, perfect tables, color figures, and even the pages of advertisers - that we expect to increase in number - thanks to this new field of dissemination.

But we are not alone in this. With the FLIP and EPUB formats it is possible to print the journal' s articles in full, export them easily via the Internet, do word, techniques and authors searches and many other facilities that you will feel that the world has changed and the journals have to adjust to this new world of knowledge digitization.

This is the biggest revolution since the invention of movable type by Johannes Gutenberg Gensfleisch zur Laden zum Gutenberg or João Gutenberg, allowing to print in large volumes from 1439. Some details are interesting: with the new formats, the online edition will consist of two entirely separate issues, one in Portuguese and another in English, easing reading of Portuguese-speading and who do not understand our language. In addition, items are replaced with a framework of abbreviations used, following the model of the best international scientific journals.

I believe that we must always improve the journal, not only to meet the requirements of the index databases in order to increase the Impact Factor (IF), but also as a

commitment that our product should improve every day, even when faced with scenarios that are distant from ideal. As everyone will recall, from the management of Full Professor Fabio Jatene as Editor-in-Chief (1996-2002), BJCVS received editorial assistance from CNPq. The budget, though it was short of the needs of the journal, helped pay the costs, complemented by BSCVS, which always met our demands.

Unfortunately, last year, our petition was denied by the financing agency as well as other scientific journals of expression, including the "Arquivos Brasileiros de Cardiologia ("Brazilian Archives of Cardiology") and "Clinics". It's not for me entering into the merit of the criteria that a development agency for the distribution of funds, but the feeling of frustration remains due to the interruption of a long partnership, precisely in the year BJCVS earned its first IF (0.963). We have made efforts, together with the Board of BSCVS, so that our case be re-evaluated and we hope that in 2012, the National Research Council could review the position and return to include us among the winners of editorial assistance.

This situation, while bad, does not discourage the Editorial Board of BJCVS, by contrast, serves as an encouragement for us to work harder! We are also finalizing the agreement to be part of another database: EBSCO Publishing, allowing BJCVS is available to more readers worldwide.

In this edition, there are four items available for testing by the system of Continuing Medical Education (CME), "Perioperative intravenous corticosteroids reduce incidence of atrial fibrillation following cardiac surgery. A randomized study" on page 18, "Clinical and demographic characteristics of patients undergoing coronary artery bypass graft surgery and its relation with mortality" on page 52, "Revascularization surgery in acute myocardial infarction: analysis of in-hospital mortality predictors" on page 66, and "Effect of decellularization using SDS in the prevention of glutaraldehyde-fixed bovine pericardium calcification: study in rats" on page 88.

In the next edition we will discuss the 39th Congress of the BSCVS held in Maceió, AL, which as usual has the BJCVS Supplement with all abstracts of Free Themes and Posters, not only of heart surgery, but also of the Academic, Nursing and Physiotherapy League, which now belong to the annals of Congress published in a journal indexed.