OBJECTIVE: The objective of this study is to compare the immediate results of patients undergoing on-pump versus off-pump coronary artery bypass graft (CABG) surgery.
METHODS: From January 2007 to January 2009, 177 patients underwent CABG. Of these, 92 underwent off-pump CABG and 85 on-pump CABG. We evaluated the demographics, preoperative risk factors, preoperative functional class, and risk assessment by the EuroSCORE. A comparison between both groups regarding the postoperative evolution was carried out as well.
RESULTS: The mean number of grafts per patient was 2.48 ± 0.43 in the off-pump group versus 2.90 ± 0.59 in the on pump group. In the off-pump group, 97.8% of patients received an internal thoracic artery graft, while in the onpump group, the percentage was 94.1% (P = 0.03). The rate of complete revascularization was similar in both groups. In the off-pump group, the circumflex artery (circumflex branch of the left coronary artery) was revascularized in 48.9% of the patients versus 68.2% of the patients in the onpump group (P = 0.01). Hospital mortality was 4.3% for offpump CABG and 4.7% for on-pump CABG (P = 0.92). The off-pump group had fewer complications in relation to perioperative myocardial infarction (P = 0.02) and use of intra-aortic balloon pump (P = 0.01).
CONCLUSION: The off-pump CABG is a safe procedure with hospital mortality similar to that observed in on-pump CABG, with lower rates of complications and less need for intra-aortic balloon.

During the past decades, coronary artery by-pass graft surgery (CABG) has allowed patients with coronary atherosclerotic disease to improve survival, symptoms, and quality of life [1]. From the mid-1990s, efforts focused on ways to reduce complications and make CABG less invasive. Cardiopulmonary bypass (CPB) induces the systemic inflammatory response through activation of the complement system, mainly via the alternative pathway induced by blood contact with the surface of the extracorporeal circuit, which triggers the release of inflammatory mediators such as the interleukin 1, interleukin 6, and tumor necrosis factor responsible for the systemic inflammatory response. In an attempt to reduce the systemic inflammatory response, the off-pump CABG has been rediscovered and refined. In 1964, Kolesov performed the first off-pump CABG in Leningrad [2].

This technique, after the initial experiments [3] has been revived by Buffolo et al. [4] and Benetti et al. [5]. Since then, it has been recommended as a primary treatment option for high-risk patients [6].

Since 1990, the experience with off-pump CABG has increased. In 1999, data from the Society of Thoracic Surgeons (STS) reveal that it represented about 10% of the total CABG surgeries performed in the United States [7]. Since 2001, the number of all surgical revascularization procedures in the United States increased up to 25%. According to STS, this proportion was about 20% until 2007 [9].

In an attempt to evaluate and demonstrate that the offpump CABG is feasible in our country, with results similar to those found in the literature, even in a service located in the countryside of Brazil, the objective of this study was to evaluate the immediate results of patients undergoing onpump and off-pump CABG. We analyzed the demographics of the population and the differences in morbidity and mortality rates at the Cardiovascular Surgery Service of the Hospital do Coração de Dourados, Mato Grosso do Sul, Brazil.

According to current guidelines, we screened 177 patients with multiarterial coronary artery disease (insufficiency), who had surgical indication to CABG from January 2007 to January 2009 at the Hospital do Coração de Dourados (Dourados, MS, Brazil). Of these, 92 patients underwent off-pump CABG surgery (Group 1) and 85 patients underwent on-pump CABG (Group 2).

Files were retrieved from hospital registry and reviewed retrospectively through review of the medical records and evaluation of medical examination performed preoperatively. The study was approved by the Local Ethical Committee (committee report nº 004/2009).

Patients were included in the study by an agreement between the surgeons provided that the revascularization might be performed reliably and in a similar manner for both operative techniques. Randomization assignment was not provided. After a detailed explanation of the investigative purpose of the study and the results already obtained in other services, written informed consent was obtained from all participants. Exclusion criteria were the presence of cardiogenic shock or mechanical complications of infarction, ejection fraction changes (<55%), and non-acceptance of the method by the patient.

The following variables were included in the study:

2. Clinical stratification of the heart functional class (FC) according to the New York Heart Association (NYHA);

The study data were set with the risk index developed by the European Association for Cardiothoracic Surgery, the European System for Cardiac Operative Risk Evaluation (EuroSCORE) [8]. The model database used by STS [9] was not used due to the lack of some data on all medical records. After the initial trial period of service that began the offpump CABG in mid-2004, all patients were operated on by the same surgeon and surgical team.

Trans- and postoperative monitoring included continuous electrocardiogram with electrodes placed on the posterior (dorsal) surface, mean arterial pressure (MAP) through peripheral artery catheterization, central venous pressure (CVP) by placing a double lumen catheter into the vena cava, pulse oximetry by placing a digital sensor, temperature by using an esophageal thermometer, and urinary output. Anesthesia was induced with fentanyl (5 mcg/kg) and etomidate (0.3 mg/kg) followed by neuromuscular blocking agents to facilitate tracheal intubation, or pancuronium (0.1 mg/kg intravenous bolus, and 0.03 mg/kg in maintenance doses). Maintenance was performed with sufentanil (0.02 mg/kg/min), midazolam bolus dose depending on requirements, and pancuronium (0.03 mg/kg/h). Both inhalation anesthetics and halogens in combination with nitrous oxide (N2O) have also been used. Vasopressors and inotropic support was administered after the onset of mobilization of the heart aiming at appropriate organic and tissue perfusion.

Patients who underwent on-pump CABG received heparin (3 mg/kg) after induction of anesthesia and harvesting of grafts. Patients underwent a median sternotomy, cardiopulmonary bypass established by cannulation of the ascending aorta and right atrium, cannulation of the right superior pulmonary vein with introduction of a catheter for aspiration and decompression of the left ventricle, hypothermia at 28ºC, isothermic blood cardioplegia delivered in an antegrade manner at a ratio of 1:4, followed by distal anastomoses. The proximal anastomoses were performed with partial clamping of the aorta and on a beating heart.

Patients who underwent off-pump CABG received heparin (2 mg/kg) after induction of anesthesia and harvesting of grafts. In both techniques, heparinization was controlled by the activated clotting time (ACT). We have placed a point with Ethibond 2-0 attached to a cotton strip with 3 cm in the pericardial deflection between the inferior vena cava and right inferior pulmonary vein in order to expose completely the heart. Distal anastomoses were performed, and the artery occluded proximally to the anastomosis with a 5-0 polypropylene thread point anchored in Teflon pledge. The area in which the anastomosis was being performed was exposed and stabilized with a suction stabilizer (The Medtronic Octopus® System). At the completion of the distal anastomoses, the systolic blood pressure was maintained at 100 mmHg. The aorta was partially clamped, and the proximal anastomoses performed. Upon completion of the anastomoses, heparin was reversed with protamine sulfate in both groups, and the operation was completed.

In this study, mean age and number of vessels treated were compared by the Student's t test. Other variables were analyzed using the Chi-square test. A p-value of less than 0.05 was considered statistically significant. 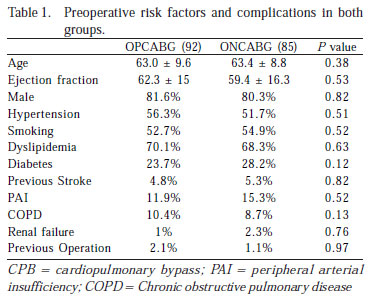 Among other complications (Table 4), the least frequent in the off-pump CABG group was the perioperative infarction rate (7.6% versus 16.4% in the on-pump group (Group 2) (P = 0.04)). The need for intra-aortic balloon pump was 3.2% in Group 1 vs. 11.7% in Group 2 (P = 0.01). It is noteworthy that the groups were similar in risk score, ventricular function and NYHA FC. Therefore, the groups were homogeneous, although there was no randomization. 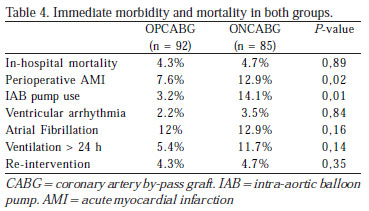 The literature worldwide shows that off-pump CABG has been a viable option for the treatment of severe coronary insufficiency [10,11].

The risks of CABG have increased in recent years due to patients' older age, the greater number of patients undergoing prior angioplasty and also by the expansion of indications for certain groups of patients, especially those with severe ischemic cardiomyopathy and comorbidities. Such conditions confirmed the distribution of patients in EuroSCORE, in which most of them are in the range of high risk.

A randomized meta-analysis (ROOBY Trial) showed that off-pump CABG surgery was associated with worse outcomes and lower graft patency [14]. Observational studies have already suggested similar results to conventional CABG [15]. The effectiveness of off-pump CABG surgery has been demonstrated in patients with multivessel disease [22], or in those with disease in the left coronary artery [16], and in high-risk patients preoperatively as well [17].

The lack of a clear benefit in clinical trials that compared patients who underwent off-pump versus on-pump CABG, led to the meta-analysis of 22 observational studies and 37 randomized clinical trials [18].

The benefits of the off-pump CABG surgery in the elderly [19], in patients undergoing hemodialysis [20] and, lately, in females [21] were shown in several subgroups of patients. In Brazil, other services have recorded their experiences demonstrating that myocardial revascularization without cardiopulmonary bypass is a procedure that can be performed with low surgical risk and with excellent results [22]. It is considered as an independent protective factor for some complications such as mediastinitis [23] and the need for blood transfusion [24].

There was no difference between groups in the rate of complications. Analyzing the incidence of perioperative infarction in our sample, we found a higher incidence in onpump (12.9%) versus off-pump (7.6%) CABG surgery. These data are similar to those found by Demers et al. [25], who reported 5.1% of acute myocardial infarction post-CPB versus 2.0% without CPB. Lima et al. [26] also reported 8.0% and 4.3%, respectively.

The need for intra-aortic balloon pump shows a statistically significant reduction in the off-pump CABG group (3.2%) compared to patients undergoing on-pump CABG surgery (14.1%) (P = 0.01). There was no difference between groups in the NYHA FC, in left ventricular function, and risk score, making them homogeneous, although they were not randomized.

The off-pump CABG surgery allows a complete revascularization rate similar to that of patients undergoing on-pump CABG, as well as a percentage of use of left internal thoracic artery superior in Group 1, which may be due to the need to avoid manipulation of the ascending aorta. The number of grafts per patient, however, was lower in the offpump CABG group. The statistically significant decrease of the grafts performed (Table 3) using the circumflex branch of the left coronary artery in the off-pump CABG group should be hold responsible for this result.

As in the ROOBY study [14], our study did not show significant difference in mortality. Data were confirmed by three large meta-analyses [27]. It was reported a mortality rate after off-pump CABG similar to the on-pump CABG.

THE LIMITATIONS OF THE STUDY

This study has several limitations requiring caution in their interpretation:

1) There are no adjustments for specific risk attributed to clinical characteristics. It may have biased the choice of a particular patient to the surgical procedure;

2) The groups are not randomised, nor are the prospective analysis. This compromises the conclusion, to a certain extent;

3) The primary endpoints could not be outlined in advance, once the analysis is based only on the database.

CONCLUSIONortality rate similar to that of the on-pump CABG surgery, with a lower incidence of complications and perioperative infarction, and less need of the intra-aortic balloon pump. The technique is feasible, with similar results even in small service facilities. However, this study lacks statistical power, and it has some biases that hamper this statement from being consistent.