The proportion of elderly people in Brazil has increased considerably over recent decades. Between 1980 and 2009, life expectancy of the population has increased more than 10 years ranging from 62.57 years to 73.17 years [1]. In addition, it is estimated that in 2050, over 15% of the Brazilian population will be 70 years or older.

Due to the increased prevalence of coronary artery disease (CAD) with age, it is assumed that an increasing number of elderly patients will become a candidate for coronary artery bypass grafting (CABG) in the coming years. Although this age group is susceptible to the influence of a number of comorbidities (renal, pulmonary, vascular, etc.), CABG has become a procedure with low mortality and morbidity, due to improvements in surgical techniques, anesthetic and postoperative care.

The objective of this study was to analyze the results of isolated CABG in patients of age > 70 years compared with patients < 70 years of age.

This is a historical prospective study in which we analyzed all patients who consecutively underwent isolated CABG from October 1, 2001 through August 31, 2005. Exclusion criteria were patients who underwent off-pump CABG or associated with other cardiac surgeries (orovalvar diseases, ventricular aneurysms, acquired interventricular communications, congenital heart defects) or vascular surgeries. The patients were assigned into two groups: G1 (age > 70 years) and G2 (age < 70 years). Data were retrieved directly from the database of the adult surgery service at the National Institute of Cardiology. The fulfilling of all the fields of the form is mandatory in order to accomplish the administrative process of discharging the patient.

At hospital admission, we collect demographic, clinical, and laboratory data, in addition to medical history and physical examination. We have also gathered the comorbidities for CABG according to the criteria of the American Heart Association and the American College of Cardiology [2], and data relevant to surgery, such as CPB time, number of anastomoses received per patient, and number of internal thoracic artery grafts used. Patients were stratified by surgical risk of death using the European System for cardiac operative risk evaluation (additive EuroSCORE).

Hypertension (HBP) was considered present when blood pressure was > 140/90 mmHg or the patient was under regular antihypertensive medication. Diabetes mellitus (DM) was defined by a record of an abnormal glucose tolerance test, a fasting blood-glucose level > 126 mg/dL on two separate tests, or the regular use of oral hypoglycaemic agents, insulin sensitizer drugs, or insulin either alone or combined. Chronic kidney disease (CKD) was considered present when creatinine clearance was < 60 ml/h, or the patient was undergoing dialysis. Vascular disease (VD) was considered when there was a history of intermittent claudication, ankle/ brachial index < 0.9, and peripheral vascular/arterial or cerebrovascular obstruction over 50% on color Doppler, CT angiography or conventional angiography.

As a routine, all patients underwent a two-dimensional echocardiography study with color Doppler to evaluate the cavity dimensions and left ventricle (LV) global and segmental function before both surgery and patient discharge, or at the discretion of the attending physician. The extent and degree of coronary stenoses were evaluated on cineangiocoronariography by at least two highly skilled professional hands.

The following outcomes were analyzed: death from any hospital origin and other postoperative complications occurred during the same hospitalization after CABG, or within the first 30 days postoperatively. The following postoperative complications were analyzed: non-fatal diagnosed acute myocardial infarction (AMI) according to the guidelines of the European Society of Cardiology [3], stroke (cerebrovascular accident/CVA) characterized as any transient or permanent neurological abnormality proven by CT or MRI of the brain, reoperation for hemostasis review, circulatory shock requiring intraaortic balloon pump (IAB), respiratory complications characterized by the use of mechanical ventilation > 24 h, or pulmonary infection requiring postoperative unit stay, acute kidney injury (AKI) requiring dialysis process, mediastinitis, sepsis from any source, atrial fibrillation (AF), and complete atrioventricular block (CAVb) requiring temporary or permanent pacemaker.

Urgent or emergency surgery was defined according to the criteria of the American Heart Association and American College of Cardiology [2].

Continuous variables are expressed as means ± standard deviation (SD), while categorical variables are expressed by proportions. In the statistical analysis, comparisons of means were assessed using the Student's t-test. Proportions were compared using the Chi-square or Fisher's exact test. Forward stepwise multivariate logistic regression analysis was used to determine which factors could be independently relevant to the development of the study outcomes. All P values are two-tailed, and P = 0.05 was considered as significant.

Table 1 shows that there was no difference between the two groups of patients related to the following: gender, DM, systemic hypertension, routine diagnostic tests of stable or unstable angina, or myocardial infarction less than three months of CABG, chronic obstructive pulmonary disease (COPD), previous stroke (CVA), CKD, VD, or need for urgent or emergency surgery, or previous CABG. 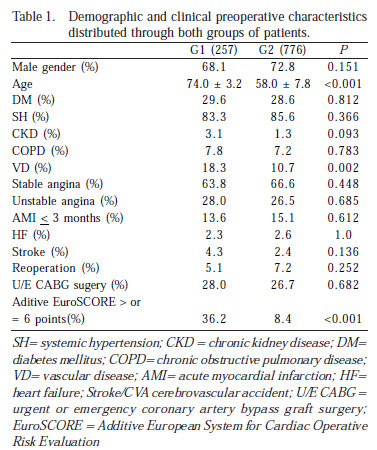 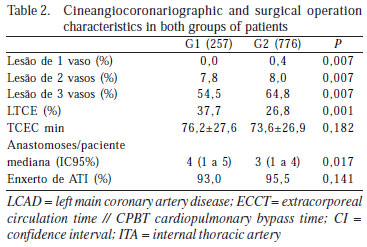 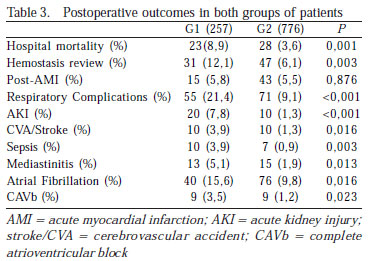 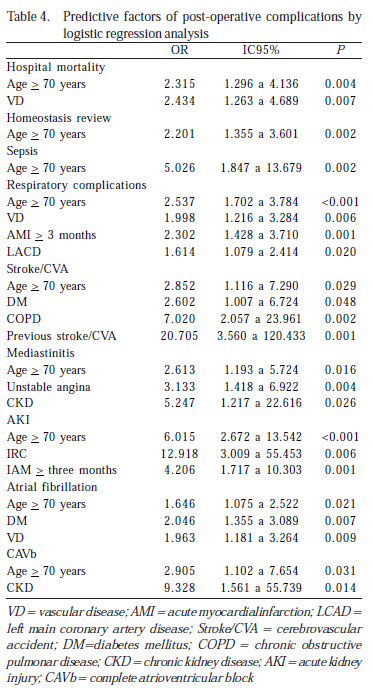 The present study performed at a cardiology center, which is a reference in highly complex procedures, suggests that elderly patients of age > 70 years are at increased risk of hospital mortality and postoperative complications of all sorts as compared to younger patients after CABG. In spite of patients aged > 70 years present more comorbidities preoperatively than younger ones (Table 1), data adjustment by multivariate logistic regression analysis linked them to increased risk of operative mortality and postoperative complications. It was observed that the elderly patients were two times more likely to die during the procedure than patients < 70 years of age (Table 4). Furthermore, compared to younger patients, elderly patients are likely to have more post-operative complications (occurrence of atrial fibrillation = 1.6 times and development of AKI = 6 times) (Table 4).

In this study, the higher mortality of aged patients after CABG is consistent with previous published results, in which the operative outcomes in elderly and younger patients were compared. In the study conducted by Johnson et al. [4], the influence of age alone on the outcome of heart surgery performed in octogenarian patients compared to younger patients was questioned. In a multivariate analysis, Johnson et al. demonstrated that 522 aged 80 years or older undergoing CABG had a higher risk of death, longer length of hospital stay, neurological complications, and need for reoperation to treat bleeding than non-octogenarians. Similarly, Alves, Jr. et al. [5] in a study involving 197 patients septuagenarians or elderly patients undergoing CABG and valve operations observed operative mortality of isolated CABG in septuagenarians compared to younger patients (19% versus 6%, respectively). These authors also demonstrated that septuagenarians had more postoperative bleeding, pulmonary complications, mediastinitis, kidney dysfunction, and stroke (CVA). They also required more vasopressors than patients < 70 years of age [5]. In another study at the Mount Sinai School of Medicine, Mount Sinai, New York, data from 2,985 patients undergoing CABG were prospectively collected. It was found that the operative mortality in patients of age = or > 80 years was 4.6%, in septuagenarians it was 2.2%, and in patients < 70 years of age it was 2.4% [6]. Naughton et al. [7] also compared the results in patients aged > 75 years and aged 60-74 years undergoing CABG. Operative mortality (30 days) in the patients aged > 75 years was 5% compared to 1.8% in the younger patients (aged 60-74 years). The logistic regression analysis showed that an age > 75 years was an independent factor for operative mortality. Peterson et al. [8] have analyzed the outcomes of CABG performed in 24,461 patients registered in the Medicare program in the United States. They found that the operative mortality was 11.5% in patients of age > 80 years versus 4.4% in patients of age 65 to 70 years. On the other hand, Ng et al. [9] found no significant difference in hospital mortality of patients > 70 years of age compared to those < 70 years old undergoing CABG (5.4% vs. 3.8%, respectively).

When analyzing the outcomes of studies that did not compare elderly versus younger patients undergoing onpump CABG, it appears that the operative mortality varies widely ranging from 1.6% to 27% [10-12]. This implies different levels of preoperative risk of these patients. An analysis of the preoperative characteristics of the elderly patients involved in this study shows the presence of a more severe atherosclerotic damage compared to the younger patients. This is supported by the higher prevalence of vascular disease (cerebrovascular and peripheral) and CKD (Table 1). In Brazil, when considering the predictors of mortality in patients aged > 70 years undergoing CABG or valve replacement with CPB, Anderson et al. [13] reported a mortality rate of 8.3% for those undergoing isolated CABG. Souza et al. [12] found a 30-day hospital mortality rate of 8.5%, when analyzing the outcomes of CABG performed in 492 patients aged 70 years or over. Iglézias et al. [14] reported an operative mortality rate of 8.5% in a retrospective analysis of 47 octogenarians who underwent CABG at the Heart Institute, University of São Paulo (INCOR) between 1978 and 1993.

In a retrospective study on the outcomes of isolated CABG in 144 patients aged > 70 years, Deinninger et al. [15] observed an operative mortality rate of 5.5%. Almeida et al. [16] observed hospital mortality rate of 7.1%, when analyzing the outcomes of 70 patients after the eighth decade of life undergoing CABG. Pivatto et al. [17] described the hospital morbidity and mortality of 140 patients aged > 80 years undergoing isolated or combined CABG. They have found an in-hospital mortality rate of 14.3%, distributed as follows: 10% for isolated CABG and 22% for CABG associated with other cardiac surgeries. In this study, it was also reported that the most frequent complications were: low output (27.9%), kidney dysfunction (10%), and prolonged ventilatory support (9.6%) [17].

In another study in which the in-hospital outcome of 87 patients aged > 70 years that underwent off-pump CABG was analyzed, Silva et al. [20] observed a hospital mortality rate of 4.6%. Of these, the incidence of AF was observed in 32.2% of the patients, bronchopneumonia in 10.3%, sepsis in 3.4%, AMI in 2.3%, mediastinitis in 1.1%, transient ischemic attacks (TIAs) in 1.1%, and pneumothorax in 1.1%. However, contrary to all these studies, Saleh et al. [21] compared retrospectively isolated on-pump and off-pump CABG in 343 octogenarian patients who were matched by the propensity score. They observed no significant differences between on-pump and off-pump patients with regards in-hospital mortality rate, MI, and stroke.

Conceptually speaking, the definition of an elderly individual based on the chronological factor is subject to errors, even though it lacks psychic, organic, and functional evidence [20]. In Brazil, the Brazilian Institute of Geography and Statistics (IBGE) classifies as elderly the individuals aged 60 or older, which obviously does not accurately reflect the biological state of them. This difficulty in the classification of elderly individuals extends to the moment in which they need a high complexity procedure, such as a heart surgery. The scores that assess the operative risk do not take into account the biological factor, which leads us to group patients with the same chronological status but not necessarily with the same biological status [22]. As in this study, we did not assess the frailty [22] in patients undergoing CABG, there is no way to measure how many of them were vulnerable in their psychological and biological conditions, despite not having significant comorbidities.

LIMITATIONS OF THE STUDY

Like any other observational study, this is only a hypothesis generator study. However, depending on the number of patients involved, it is reasonable to assume that the results are representative of current clinical practice in our country. Because all patients underwent on-pump CABG, it is obviously that we could not verify whether offpump surgery would bring any different result than observed.

This study suggests that patients age > 70 years are at increased risk of death and other complications after CABG compared with younger patients.