Extracorporeal circulation (EC) of blood during cardiopulmonary bypass has been shown to induce the production of several pro-inflammatory molecules such as cytokines, chemokines, growth factors, and vasoactive substances. The ensuing systemic inflammatory response and the super-imposed period of ischemia-reperfusion are conditions that promote the production of oxygen-derived free radical species, which are able to initiate lipid peroxidation and a chain of events leading to cell membrane damage, tissue injury, and functional impairment [1]. One of these complications is the ischemia-reperfusion injury that causes several damages to the myocardium and contributes to the mortality and failure of cardiopulmonary bypass. [2].

To predict and treat these syndromes is a goal in intensive care units. Thiobarbituric acid-reactive substance (TBARS) is a marker of oxidative stress and has cytotoxic and genotoxic actions [3-6]. C- reactive protein (CRP) is used to evaluate the acute phase of inflammatory response [7]. Therefore, we conducted this study to assess the TBARS and CRP levels during EC in patients submitted to cardiopulmonary bypass.

Blood samples were collected immediately before initializing EC, T0;in 10 minutes, T10; and in 30 minutes, T30. Plasma TBARS levels were measured according to the method of Buege & Aust [8] and Lapenna et al. [9,10]. Briefly, 0.5 ml of ethylene diamine tetra-acetic acid plasma was added to a reaction mixture (1.0 ml) formed by equal parts of 15% trichloroacetic acid, 0.25 N hydrochloric acid, and 0.375% thiobarbituric acid, plus 2.5 mM butylated hydroxytoluene and 0.1 ml of 8.1% sodium dodecyl sulfate, followed by 30 min heating at 95ºC; pH value of the analytical reaction mixture was about 0.9. Butylated hydroxytoluene was used to prevent lipid peroxidation during heating. After cooling, the chromogen was extracted with n-butanol and read spectrophotometrically at 532 nM. C Reactive Protein (Bioclin®, High-sensitive C Reactive Protein K079) was measured by autoanalyzer equipment (Selectra®).

Variables were expressed as mean ± SD and medians. To compare results between times T0, T10, and T30 Anova one way analysis of variance and Student's t-test were used. Statistical significance was indicated by a value of P < 0.05. 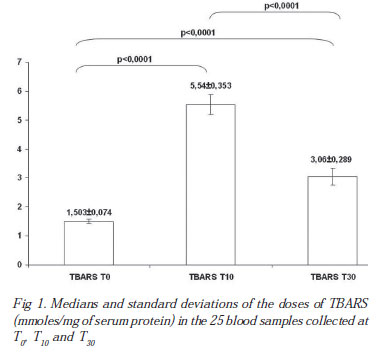 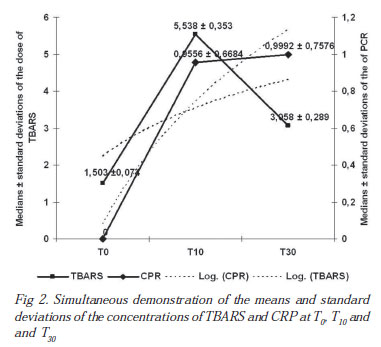 Cardiac surgery with cardiopulmonary bypass evokes a systemic inflammatory response syndrome in practically all patients. The intensity of such syndrome experienced by an individual patient will be critical to determine the outcome. To predict the occurrence of postperfusion syndrome during cardiac surgery with EC is a daily real challenge in intensive care units. In the present study we assessed the TBARS and CRP levels during EC in patients submitted to surgical myocardial revascularization. We preselected 276 patients. The initial sample was reduced to 25 subjects, representing only 0.05% of the total population. This fact is due to the rigidity imposed on the inclusion and exclusion criteria, thereby, reducing the chance of any influence of others pathologies on the levels of TBARS and CRP.

Previous studies [11,12] discuss the effects of diabetes on organic reactions in various organs, thus demonstrating that the inclusion of diabetic patients could influence the levels of TBARS and CRP during EC due to underlying disease. Like diabetes, Lucchi et al. [13] demonstrated the correlation between creatinine clearance and increased oxidative stress in tissues and plasma serum. Thereby, we do not included patients with serum creatinine above 1.2 mg/dl as it could act as a factor that changes the results. Smokers were excluded from the sample because they have increased basal levels of TBARS and CRP. Recent data also support a contributory role for reactive oxygen species in the pathophysiology of cardiac hypertrophy and cardiomyophathies and because of that we excluded patients with ejection fraction less than 50% [14].

Measurements of TBARS in three different moments during EC showed significant difference from baseline through T30. It is in agreement with Zanoni et al. [15] that demonstrated the occurrence of immune and inflammatory changes in patients during cardiac surgery with EC. Actually, EC is a nonphysiologic condition imposed to the body, causing cellular structural and functional damage. It triggers a significant inflammatory response in cardiac surgery and is observed that this response is significant lower when the time of EC is less than 70 minutes [16-19].

In the present study, the mean EC time was 63.88 ± 20.75 minutes, whereas from the 25 patients, 13 had an EC time of less than 70 minutes and 12 patients had a EC time more than 70 minutes with a maximum time of 95 minutes. No complication occurred during and after the surgery in any patient. When the results of TBARS and CRP levels were analyzed in two groups according to EC time (less and more than 70 minutes) there were no significant differences between the averages in the 3 times of sampling. The perfusion is related to activation of an inflammatory response that leads to changes in cellular and humoral activation of the complement system and coagulation cascade, causing changes in permeability and vascular reactivity [17-19].

This systemic inflammatory response to cardiopulmonary-bypass has the potential of engendering a constellation of clinical, biochemical, and radiological manifestations of multiorgan dysfunction [20]. Previous studies related neurologic disorders observed in EC, especially in prolonged times [16,21]. In the heart, the ischemia-reperfusion injury includes a series of events: (a) reperfusion arrhythmias, (b) microvascular damage, (c) myocardial stunning 'reversible mechanical dysfunction' and (d) cell death, which may occur together or separately [22]. These changes are considered to be the consequence of imbalance between the formation of oxidants and the availability of endogenous antioxidants in the heart. Maulik et al. [21] demonstrated, in swine, that the oxidative stress developed in the reperfused heart is one of the causative factors for the development of apoptosis. The EC was an important technological development for cardiac surgery, but its safety is not negligible due the inflammatory response generated, and the longer the duration of EC largest degree of aggression is generated in patients, functioning as an independent predictor for postoperative complications.

The use of CRP as an acute inflammatory process marker showed that the dosages at baseline (T0) were negative and underwent to an increase in T10 that remained until T30 Pepys et al. [23] and Volanakis et al. [24] demonstrated in their studies that the increase of CRP in T10 and the maintenance in T30 is due to the inflammatory stimulus generated by EC that can remain for an average of 19 hours after the activation of the inflammatory process. This was well demonstrated by Milei et al. [25] in 24 patients submitted to myocardial biopsy during cardiac surgery with EC. Because there was a significant elevation of CRP during EC we can say that there is an inflammatory process triggered. However, as CRP remains higher throughout the EC, it is difficult to use it as an isolated marker in the postoperative period. In the present study, we tried to correlate TBARS and CRP levels. It was observed a linear regression in T10 that did not remain until T30 Thus, TBARS and CRP levels could not be directly correlated during monitoring patient.

We believe that these are no expensive measurements and their assessment during peri and postoperative period can add new information about the inflammatory response during extracorporeal circulation. One of the limitations of the present study is the small number of patients enrolled. However, without any condition that could interfere in the results, we established the presence of an inflammatory response and oxidative stress during EC. Others studies should be conducted in patients with renal failure, diabetes or smoking habits and compared the levels of TBARS and CRP in different times of EC. The routine measurement of TBARS and CRP during EC can generate different levels of inflammatory response and predict complications during the postoperative period of cardiac surgeries. The results can help to change therapies before a possible complication, such as the early use of corticosteroids and acetylcysteine [15-17].

C-reactive protein and TBARS plasma levels progressively increased during extracorporeal circulation, with maximum values of TBARS at 10 min and of CRP at 30 min. It suggests that there are an inflammatory response and oxidative stress during EC.