Endovascular treatment of abdominal aortic aneurysm expansion with a transverse diameter of 6.5 cm with triplelayer stents in 88-year-old patient with a history of hypertension, increased cholesterol and smoking evolving with abdominal pain, vomiting and malaise (Fig. 1). The surgical technique used was the placement of stents in triple layer of nitinol manufactured at Braile Biomedica (São José do Rio Preto, Brazil) in right aortic moniliacal position for treatment of abdominal aortic aneurysm and right common iliac artery [1]. 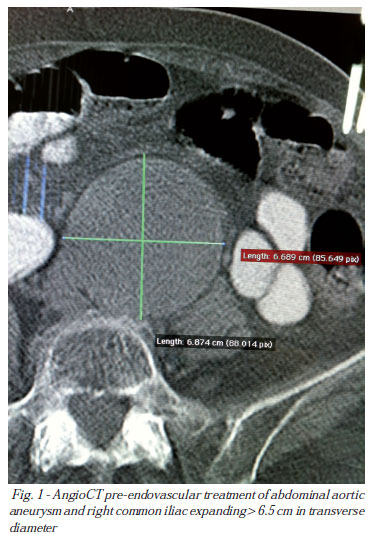 Right brachial catheterization was performed with the placement of 5F introducer and 5F pig catheter just to the level of the superior mesenteric artery for contrast injection and for light diagnostic and visceral branches. Through right inguinotomy, the right common femoral artery was dissected with the passage of 6F introducer with cauterization of common and right external iliac arteries that
were tortuous.

Puncture of the left common femoral artery and placement of 5F introducer.

Through the right external iliac artery with 5F Cobra catheter introduced with a hydrophilic wire of 0.035 mm above the renal arteries and exchanged for a super stiff 0.035, with the Cobra catheter and the right femoral introducer being withdrawn, with the passage of the first stent 28 mm in diameter and 13 cm length when fully open.

This fist stent had its extremity at the level of the superior mesenteric artery, and on the renal ending at the middle portion of the right common iliac artery.

The second stent of 30 mm in diameter and 11 cm long was with its proximal end just below the renal arteries and its distal end at the level of the right distal common iliac artery.

The third stent of 32 cm in diameter and 11 cm in length was immediately below the renal arteries and above the iliac bifurcation sealing the first two stents, perorming the ballooning of the stents in triple layers in the proximal, medial and distal portions. 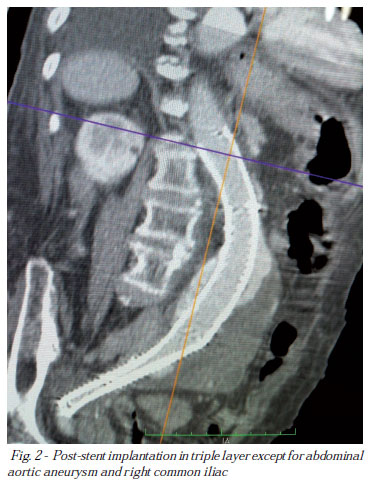 On the fifth postoperative period, angiography was performed in the thoracic aorta, abdominal and iliac arteries with the presence of laminar flow in thel interior of stents, partial thrombosis of the aortic aneurysm sac and right iliac arteries, reducing the diameter of the aortic aneurysm to 5.0 cm and peri-stent flow, keeping the left iliac arteriespatent. Clinically, the patient was stable consitions, no drugs,
maintaining blood pressure, without abdominal pain, good diuresis, without fever, however, with behavior disorders. The patient was discharged after 7 days.