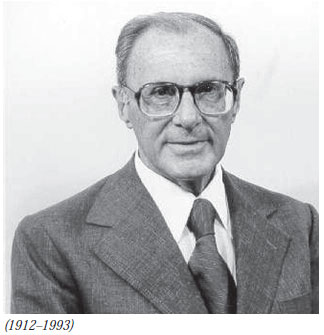 "Operating is fun, an art, a science and does good to others"

The Brazilian cardiac surgery has always been one of the best in the world, with several important writers who were and still are responsible for this success. However, one of them had an outstanding participation, and his name should always remain present and remembered by all lovers of Cardiology and the Brazilian people in general.

Euryclides de Jesus Zerbini is his name. If he were among us, would be 100 years old on May 10, 2012. Born in Guaratinguetá, São Paulo State, Brazil, was born into a modest house in the countryside, on May 10, 1912. His birth was premature and he so small that he could fit well in a shoe box. He grew up in a family of five children and an Italian father, a naturalized Brazilian, professor of elementary school, who was responsible for his decision to study Medicine. In the Medicine School of University of São Paulo (USP), he has acquired an excellent reputation and, in 1933, at Santa Casa de São Paulo Hospital, met the famous surgeon Alipio Correa Netto, who became his mentor and inspiration for all his career. He graduated from Medicine in 1935 and did a specialization course in general surgery. A cardiac intervention was still rare in medicine and the heart was the taboo for surgeons.

Four years after his graduation, he was indicated by Professor Alipio Correa Netto as the discipline first assistant and chief of the Division of the Medical School of the University of São Paulo.

It was at Santa Casa de São Paulo Hospital where Zerbini performed his first heart surgery, the patient was six years old, in state of shock, in cardiac tamponade after chest trauma. He opened the pericardium, removed the heart fragment and connected the anterior descending artery, which was injured. Although today is not the indicated procedure, the case was published in the Journal of Cardiac Surgery in 1943, having been a great contribution at the time.

After one year in the United States of America (USA), Zerbini returned to Brazil and performed the second surgery, a modified Blalock-Taussig shunt, followed by the first surgery of arterial canal ligation, an 18-year old man and the first surgery for aortic coarctation in Brazil. Hypothermia was introduced into the treatment of congenital heart defects, an interatrial commuinication type. But with the development of artificial heart-lung machine by Walton Lillehei, Zerbini along with his wife, Dr. Dirce Costa and the medical students Adib Jatene , Delmont Bittencourt and Geraldo Verginelli go to Minneapolis, USA, to visit the service of Dr. Lillehei and learn about the early steps of the surgery with extracorporeal circulation.

Zerbini initiates the use of artificial heart-lung machine only one year after the pioneering work of Hugo Felipozzi performing the first surgery with extracorporeal circulation in Brazil. In 1958, his effort begins in the treatment of tetralogy of Fallot, and ten years later, he had already had an experience of 480 patients. At that time, he was invited to minister to "Honored Guest Lecture" in the American Association for Thoracic Surgery, entitled: "The complex surgical treatment of Fallot: late results."

The initial phase of open heart surgery was marked by a high mortality (30%) for different diseases. Along with Amaral Rui Gomide, identified disorders acid-base balance, caused by cardiopulmonary bypass, as the main villain, acquiring the first pH meter in Brazil.

In early 1960, the first artificial heart valves were created. The mechanical valves began to be produced in Brazil, initiated by Adib Jatene, however, these prostheses, due to their necessity of anticoagulation, represented a handling serious medical problem. In attempting to overcome this difficulty, Zerbini, Puig and Verginelli introduced a homologous dura mater biological valve in Brazil. The results were excellent and allowed its use throughout the country and also abroad. Although the solution regarding anticoagulation have been resolved, this valve had technical and logistical problems, having been discontinued, and then the bovine pericardial and pig valves were presented, made by several laboratories around the country.

In the late '60s, the world received news of great impact related to the first heart transplant performed in South Africa by Christiaan Barnard. Shortly after only five months Barnard had done his deed on May 25, 1968, Zerbini performed the 17th heart transplant in the world (Figure 1), and on September 26 of that year, he successfully performed his 2º transplant surgery. Zerbini had a great recognition of all of Brazilian society, becoming a true idol, and has also been honored by the governments at various levels, medical societies and the common citizens. 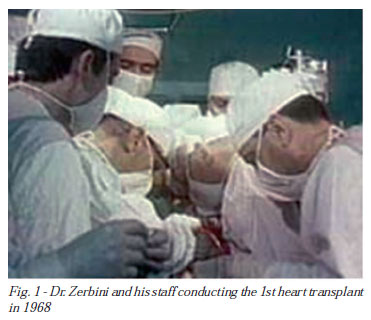 The Brazilian cardiac surgery arises from a series of important events, having several surgeons of great prestige abroad coming to Brazil and also being recognized the pioneering and amazing work undertaken by Zerbini and his group. Denton Cooley was one of the surgeons who came to Sao Paulo more than once, visiting the service of Professor Zerbini. This also led to an internal development, in which Curitiba and Recife were the two Brazilian cities to perform open heart surgery with extracorporeal circulation outside Sao Paulo-Rio axis. The internalization of cardiac surgery was also performed by one of his disciples, Professor Domingo Braile, which successfully implanted in 1963 a cardiac surgery service in Sao Jose do Rio Preto, São Paulo. Also, one of the foremost disciples of his, Professor Gallucci Costabile, created the center of cardiac surgery at Paulista Medicine School, UNIFESP, which became famous worldwide as a result of the work of Professor Ernie Buffolo in coronary surgery without the aid of extracorporeal circulation.

Two great legacies left by Zerbini were the creation of the Brazilian Society of Cardiovascular Surgery (BSCVS) and the Heart Institute of São Paulo (INCOR). The BSCVS is an active society, with over 1,000 members, which conducts a large annual conference, presenting important works of scientific relevance, and is responsible for certifying the title of specialist in cardiovascular surgery. The BSCVS also has the Brazilian Journal of Cardiovascular Surgery (BJCVS), considered the best publications in the area throughout Latin America, but also it has the recognition of the international scientific community with its indexing in Medline. Recently, BJCVS had received from ISI Thomson Reuters its first Impact Factor (IF). The index of 0.963 was highly significant in the case of an initial assessment, according to its chief editor, Prof. Domingo Braile. The INCOR is directly connected to the University of São Paulo, responsible for training of human resources quality in the medical / cardiology area and also with a scientific production of high quality, with numerous publications in national and international journals (Figure 2). 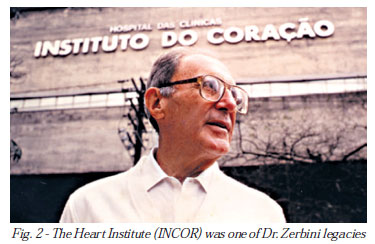 All Zerbini did was good. He was a hard worker, being recognized by his disciples and leading the BSCVS to create the award entitled: "The worker of the Heart", because that was the way he considered himself. He would often repeat: "Omnia vincit labor" - nothing resists work. He worked until the last days of his life, always concerned with the transmission of knowledge in cardiology (Figure 3) [1-6]. 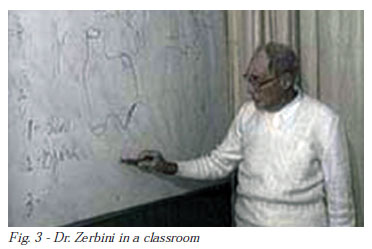 After retiring from his academic career, stayed active and active working in his private service at Hospital Beneficência Portuguesa, São Paulo, and traveling the whole country teaching and motivating people to continue their work. It was his great contribution to the introduction of heart transplants in the North and Northeast. His last appearance was in scientific events in Maceió at the Ninth Meeting of the Disciples of Prof. Zerbini in August 1992 (Fig. 4). It was the year he completed 80 years of life and participated with enthusiasm and vigor of the entire scientific program and social activities. It was his last concert. More than one doctor he was an artist who captivated and charmed everyone. Months later came the illness which kept him out of us physically. His ideas remained and support us. 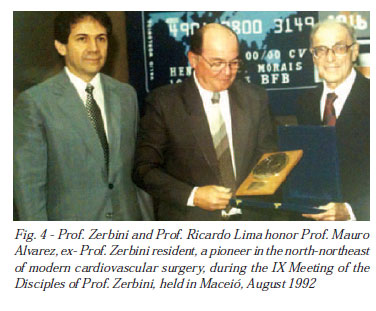