Acute aortic insufficiency due to avulsion of aortic valve comissure

A 66-year-old male patient, prior hypertension, a history of orthopnea, palpitations and chest pain of sudden onset, which was diagnosed as spontaneous avulsion of aortic valve commissure and consequent aortic insufficiency progressing to acute left heart failure refractory to medical treatment. The patient underwent early surgical replacement of the aortic valve by a bioprosthesis, and presented satisfactory postoperative course. Currently, four years after the event, he is still in attendance in functional class I.

Acute aortic regurgitation (AR), although uncommon, is associated with poor prognosis if not diagnosed and treated early. It is most often caused by bacterial endocarditis, aortic dissection or blunt chest trauma [1]. Another mechanism is the fenestration rupture of a valve, or the avulsion of the commissures of the aortic wall [2].

The objective of this study is to report a case of avulsion of the aortic valve commissures associated with hypertensive crisis triggered by emotional stress which was treated surgically.

Male patient, 63 years old, previously healthy, with a history of poorly controlled hypertension, presented sudden intense chest pain, breathlessness and palpitations associated with duration of about two hours, which improved spontaneously. These initial symptoms were related to strong emotional stress (patient was the victim of a robbery). In the days that followed, he evolved with dyspnea at rest and orthopnea, which urged him to seek medical attention. Negative symptoms for fever, infection, previous history of rheumatic disease and family history of cardiovascular disease.

Upon admission to the emergency room, the patient was in good general condition, conscious, presenting tachycardia and tachypnea. The heart rate was present and symmetrical, with normal amplitude. Blood pressure was measured in the upper limb presenting 140 x 50 mmHg. Cardiac auscultation revealed a regular heart sounds at three times, with a diastolic murmur 2 + / 4 in the aortic area radiating to the mitral area. Pulmonary auscultation revealed bilateral vesicular murmur and symmetrical, with subcrepitant rales over bases. Upon inspection it was observed intercostal retractions.

After the diagnosis, surgical treatment was indicated and initiated clinical treatment with furosemide, sodium nitroprusside and dobutamine, until the start of coronary angiography. Coronary angiography showed no obstructive coronary lesions. After coronary angiography, the patient was referred for surgery, not showing improvement with clinical treatment. The operation was performed through median sternotomy. The heart was of normal size and there was no hemopericardium or hematoma in the ascending aorta. Cardiopulmonary bypass was instituted through cannulation of the ascending aorta and right atrium and conducted in moderate hypothermia (32ºC). Myocardial protection was achieved by intermittent cold blood cardioplegia 4:1 via antegrade and retrograde every 15 minutes. Access to the aortic valve was obtained by oblique anatomy, which revealed the ascending aorta and sinuses of Valsalva of normal diameter and appearance. The three aortic valves were apparently intact, but the valve commissure between the coronary and left coronary artery was not detached (Figure 1). 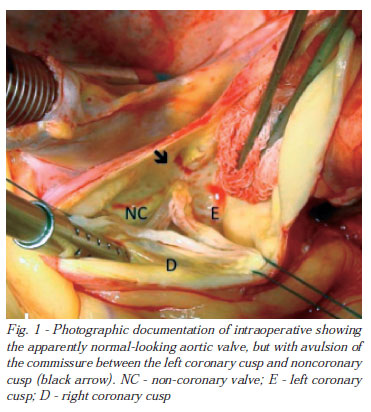 The performance of valvuloplasty with resetting of the commissural post in its anatomical position is considered. However, the surgeon's option was for valve replacement with bovine pericardial bioprosthesis with Labcor ® support, fearing limited durability of the plasty. The CPB time was 50 minutes and anoxia time for 38 minutes. The pathology of the aortic valve was consistent with myxomatous degeneration.

The postoperative recovery was satisfactory, without complications and the patient was discharged on the seventh day. The postoperative echocardiogram showed normal functioning of the aortic bioprosthesis with preservation of ventricular function. After four years of aortic valve replacement, the patient remains asymptomatic with ambulatory cardiovascular monitoring.

The AF secondary to acute avulsion of the aortic valve commissures is a rare event, but poses some challenges in its use.

The first challenge relates to the diagnostic. In acute AF, the widening of pulse pressure and other peripheral signals associated with chronic AF, are often absent. Moreover, the holodiastolic murmur of chronic AF is replaced by a protodiastolic murmur little audible in acute AF [1]. Patients often have dyspnea, hemodynamic instability and shock. In acute AF following avulsion of a commissure, and the clinical presentation is nonspecific as described above, there are no other commemoratives that may assist in diagnosis, and this will then require a high degree of clinical suspicion.

In the case described, the history of a stressful event and the history of untreated hypertension associated with chest pain and dyspnoea initially could suggest the hypothesis of acute coronary syndrome. Only careful clinical examination associated with echocardiography allowed accurate diagnosis. It is possible that acute stress has precipitated a sudden increase in diastolic blood pressure, which may have caused the avulsion of the aortic valve commissure of the aortic wall. Some authors [3] have described this mechanism previously. The avulsion of a commissure of the aortic valve, in most cases, is related to some anatomical predisposition, such as local atheroma, mid-cystic necrosis and syphilis [2], although it has been described in association with hypertension in anatomically normal valves [3]. In this case, the aortic valve showed anatomic substrate (myxomatous degeneration) that may have contributed to the commissural avulsion.

The second challenge refers to the surgical approach. In our case, the ascending aorta and aortic valves were apparently normal at macroscopic inspection. This finding could lead the surgeon to the decision of repairing and preserving the valve. However, this decision does not seem so simple. As described above, it is common the presence of anatomical factors [4], such as cystic necrosis medium, which predispose to avulsion of the commissure and cannot be detected in a preliminary inspection. The presence of any of these factors could compromise the surgical outcome later, if the valve was preserved.

Despite the small number of cases reported in the literature, some authors suggest that aortic valve replacement would be the best choice, considering the poor long-term results while preserving the valve in this context [4], compared to the consistent results of aortic valve replacement by bovine pericardium bioprosthesis [5,6]. However, there are reports showing acceptable results using the repair and preservation of the valve [7], although the safety of this technique is not known. The issue of preservation of the aortic valve, where practicable, in the treatment of other etiologies of AF is also controversial. Some authors have reported adequate late results [8], while others suggest that the preservation of the valve can produce unsatisfactory results [9]. We believe that there are not any studies with sufficient statistical power to definitively answer this question.

In conclusion, spontaneous avulsion of a commissure of the aortic valve causing importantly acute AF requires a high index of suspicion for the diagnosis, although it is rare. Surgical treatment should be given early, and valve replacement appears to be the safest option given the lack of information about the late follow-up of patients undergoing aortic valvuloplasty.