In early 1981, I was called by Prof. José Carlos Prates to the Anatomy Laboratory of Escola Paulista de Medicina (EPM). There, the Profs. Prates and Nader Wafae wanted to introduce myself a sophomore scholar of medical school studying anatomy of the heart. So, I was presented the scholar Luis Roberto Gerola, with the request that I introduce him aspects of the surgical anatomy of the heart. That day began a friendship and contact with a person of superior intelligence, dedication, unusual, brilliant thinking and enormous creativity. Since then, I had the privilege of living with a brilliant individual throughout their academic, medical and surgical life. Unfortunately, this journey was cruelly interrupted at the peak of his scientific, intellectual and professional at the age of 51.

On the other hand, I thought I knew very well Gerola, but in the last three years together, I had the chance to meet another side of Luis Roberto - a tireless fighter for his life - fought so hard, endured so many complications that several sometimes seemed to "resurrect" - man against the cancer corroding his pancreas, bile duct, hepatic artery, superior mesenteric artery, duodenum - fought bravely to survive and never surrendered to the disease. In this unfair fight, he won many battles - some of which often the closest friends considered him lost. Soon he was working again. A few days later he was back in the office, the surgery center. He won several of these battles, but lost the war against a treacherous, unjust and cruel enemy. After a few short periods of hospitalization, he died - as he wanted - at home, with his family on December 11, 2011.

When Gerola was 14 years old he moved to Limeira, alone, living in a rented room in family house, to attend the Technical College in Limeira, UNICAMP, and thus completed the College and graduated in Practical Nursing. In this condition, led to the study of biological sciences and started his learning and taste for surgery when he had the opportunity to instrument operations at the Santa Casa de Limeira in his spare time. He said that there was born an unusual interest in medicine in general and surgery in particular. With financial difficulties and the expense of his own work, he made pre-university preparatory course, living one year (1978) in Piracicaba, SP, and others (1979) in Ribeirão Preto, SP. It was approved for FUVEST college exam in late 1979, at EPM, where he conducted medical school, from 1980 to 1985. 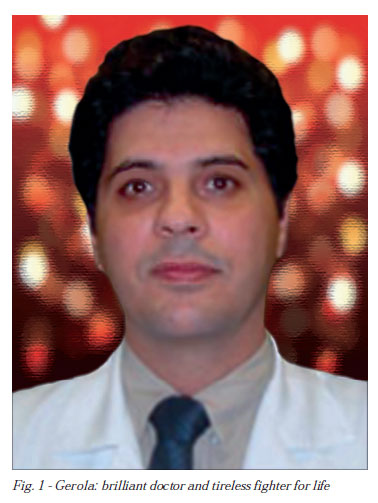 The life of Gerola, while still academic, is impeccable, having been official monitor or student of Scientific Initiation throughout the course, from 2nd to 6th doctor degree. He alternated his "official" monitoring (MEC) and Scientific Initiation (FAPESP) between the Anatomy and Thoracic Surgery. He always had an "official" and "voluntary" relationship, but never withdrew them. Parallel to this, to afford his housing and studies, he took several positions at the Central Laboratory at São Paulo Hospital, from plantonist to supervisor. Although academic, he wrote several studies, both as author or coauthor, helped theses and even had the audacity to publish original study, with own and unique considerations of anatomy and embryology of Anomalous Right Ventricular Band. How dare!

Despite the difficulties noted above, the Gerola stood out too much - still academic - in anatomy at the Central Laboratory and Thoracic Surgery - and drew attention of all the unusual dedication, intelligence and creativity. It was evident his love for Thoracic Surgery (now we call Cardiothoracic) and it made to find our great teacher Prof. Dr. Costabile Gallucci, great catalyst for talent - not only in science, but a deep knowledge of men, their souls, their talent and ability to put each in a proper way. Professor. Gallucci agreed immediately to requests by Gerola and gave him many opportunities, especially the chance to mingle with people of the caliber of Antonio C. Carvalho (his countryman) and Enio Buffolo, among others. I was also honored, as had happened before in Anatomy - of being appointed by Prof. Gallucci as the academic advisor and then monitor Gerola and be his "Duty Chief" at Postoperative Recovery.

This situation is probably the reason he was invited by Prof. Dr. Domingo Braile to write this memorial, which, more than a posthumous tribute to Luis Roberto Gerola, is a tribute to all the colleagues, friends and admirers who won, either in the EPM, the Faculty of Medicine, University of São Paulo ( USP), the Heart Institute of Clinics Hospital (InCor) and in other hospitals where he worked as a surgeon or intensivist - all who had the privilege of living with Gerola. So, I accepted this arduous, painful and sad task in honor of Gerola and on behalf of all with whom he lived, taught, learned or admired. I write here, perhaps as an admirer of music (very frustrated) I think of Gerola as a Debussy (a classic that never fulfilled the rules) or in jazz, as Bill Evans or David Brubeck (always dissonant). Brilliance, always - it was never missed in Gerola's life.

Graduated at EPM, he chose residency in General Surgery and then Cardiac Surgery at FMUSP and InCor. He was fortunate to have as colleagues and mentors Luiz Felipe P. Moreira and Paulo Manuel Pêgo-Fernandes. During this period, Luis Roberto had particular affinity and admiration for Full Professor Sergio Almeida de Oliveira and Full Professor Luiz Boro Puig.

After finishing the surgical residency, he "survived" working in postoperative clinics of both teachers and also maintained a surgical activity. Fundamental difference to mention: he not only survived financially, but at the same time produced studied of weight with both teachers - who have generated publications with an international repercussion - with Dr. Sergio Almeida e Dr. Puig. On this occasion, working with Dr. José Ernesto Succi and me, in our modest clinic, was a privilege and always the certain of a loyal, honest, sincere, responsible, dedicated, restless, and especially creative colleague. Exceptional surgeon, that combined skill, intelligence and brilliance in the surgeon's more difficult task - the decision-making.

Working and financial conditions led Gerola to seek and to have own "services' (or with members) in Taubaté (SP) (1993-1995) and Cuiabá (1995-1996). After this period he has been greatly shaken by the sudden death of his father at the end of 1996. This point was decisive in the decisions and directions of Gerola's life. 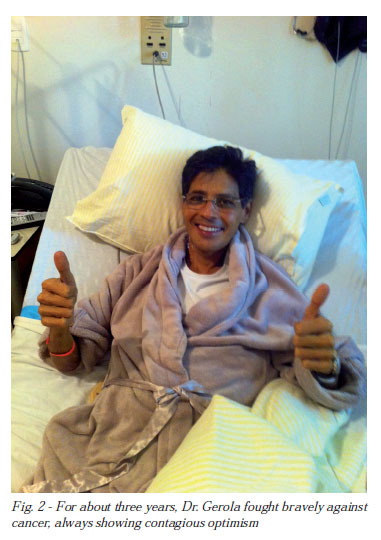 Shaken by the sudden death of his father, returns to the EPM and finds, after 11 years of absence, the support of Prof. Enio Buffolo. The master's degree was already complete in Anatomy. The university career, Ph.D. (Cardiovascular Surgery) and postdoctoral (FAPESP), were the natural sequence expected, and after public tender he was accepted and joined the permanent faculty of the UNIFESP-EPM, in 2002.

As a lecturer in cardiovascular surgery, he was president of the Academic League, Preceptor of Residents and responsible for heart surgery in chronic dialytic patients or transplanted at the Kidney Hospital.

It is important to note that throughout this period, Luis Roberto Gerola never stopped producing important collaborations. This refers primarily to arterial grafts, human valves, Ross operation, aortic homograft and ingenious techniques for repair of interventricular communication and aneurysms after myocardial infarction. I should like to not discuss such items, because they are widely available in the literature and in his curriculum and Lattes.

Many of his activities, however, does not appear in the coldness of Lattes. Until the last months of his life he was working hard in partnership with Professor Helena Bonciani Nader - studying aspects of molecular biology in the endothelium of radial, internal mammary arteries - seeking explanations for the different behavior of these vessels when used in coronary artery bypass position. He intended this study became his Full Professor's thesis, something he dreamed up his last days.

Throughout many years of living, he left to all the image of "boy" - always with a smile. His victories and achievements, his disappointments were always reported with a "naughty" smile, sometimes ironic, but always conformed and optimistic. We never saw Gerola with a sad expression, hurt.

In recent years, Gerola made room for his surgical "origins": he back to work part time with Dr. José Ernesto Succi, me and our team, now enriched by Dr. Guilherme Succi; the fate decreed that when this synergy ( Gerola -Guilherme) was expressed at its maximum at the peak of his creativity and enthusiasm, Gerola presents suddenly jaundice without apparent cause and the investigation eventually prove to be a carcinoma of the head of the pancreas.

For about three years, Gerola fought bravely. He continued serving in the clinics, writing papers and even operating. Throughout the long struggle against cancer, he repeatedly mocked his own situation, his sorrows, semiocclusions, diarrhea, weight loss. In recent months, several times he took leave of me in the office, saying - "I'm leaving before to go to the open-air, to eat pastel and drink sugarcane juice, so I can gain weight a little".

We talked two or three days before his death. But he did not want to talk about disease - he wanted to talk about a contest that I had examined days before, the point chosen, the class, etc. I felt he was tired, breathless. I ended the conversation saying other reason and said he would continue the conversation on Monday. There was no time, he died on the afternoon of Sunday, December 11. I received the news of his death and got me to go to the wake. In the elevator, ready to quit, I choose not to go. I had no courage to see him dead, selfish, perhaps, I preferred to save me the picture of my friend Luis always smiling. I went home, I opened a bottle of wine and I listen to music and writing. The music playing was something that really marked my youth and always reminds me of Gerola and those whose lives are cut short so early. The song is called Abraham, Martin & John (1968), music and lyrics by Richard Holler.

Has anybody here seen my old friend .... ?
Can you tell me where he's gone?
He freed a lot of people, but the good It Seems They Die Young.
You know, I just Looked around and he's gone.