Chronic obstructive pulmonary disease (COPD) has been associated with increased morbidity and mortality in patients undergoing coronary artery bypass graft (CABG)[1]. Many studies showed that as higher severity degree of COPD is associated to longer mechanical ventilation time and length of stay in the hospital and, consequently, increased hospital costs[2]. Furthermore, severe COPD patients undergoing CABG have a worse prognosis and increased mortality rate at long-term, when compared to patients without COPD[3,4].

Therefore, the aim of this study was to evaluate the pulmonary function and clinical outcomes in severe COPD patients, comparing pleural drain insertion site in intercostal space versus subxyphoid region after OPCAB using left ITA (LITA).

This prospective randomized study was performed between December 2007 and March 2012 at the Cardiovascular Surgery Discipline, Sao Paulo and Pirajussara Hospitals of the Federal University of Sao Paulo, Sao Paulo, Brazil. The Institutional Human Ethics Committee approved the protocol and written informed consent was obtained from all patients.

The subjects were randomized into two groups by computerized system according to pleural drain position and the secrecy was maintained by sealed, numbered and opaque envelopes: II group (n=27), pleural drain was inserted in the sixth intercostals space; and SI group (n=29), pleural drain in the subxyphoid position.

Spirometry records were obtained to evaluate the forced vital capacity (FVC) and the forced expiratory volume in 1 second (FEV1) on preoperative and postoperative days 1, 3, and 5 (POD1, POD3, POD5) by the same respiratory physiotherapist, using a portable espirometer (Spirobank G, MIR, Rome, Italy) according to the standards of the American Thoracic Society[8]. Chronic obstructive pulmonary disease was defined according to the criteria of the Global Initiative for Chronic Obstructive Lung Disease - GOLD, with presence of dyspnea (progressive and/or persistent), chronic cough or sputum production, and/or a history of exposure to risk factors for the disease (tobacco smoking, occupational dusts and chemical), and by spirometry with FEV1/FVC < 0.70. Furthermore, the severity of COPD was defined as described on Table 1[9]. 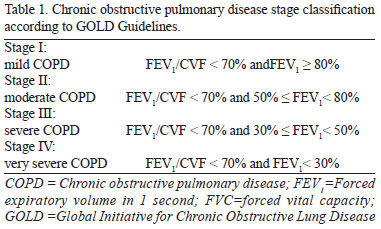 Pulmonary shunt fraction was evaluated preoperatively and on POD1 using the software Oxygen Status Algorithm, (version 2.0; Mads & Ole Siggaard; Radiometer). This software needs the arterial blood gas and the fraction of inspired oxygen to calculate the percentage of blood that is not supplied by oxygen.

All patients received a standard anesthetic technique, induction with etomidate and midazolam, maintenance with sufentanil and isofluorane (0.5% to 1%) and were mechanically ventilated to maintain normocapnia, with a 50% inspired oxygen fraction without positive end-expiratory pressure. Intraoperative fluids were given according to the anesthetist discretion.

The OPCAB surgery was performed through a median sternotomy, using LITA complemented with additional saphenous vein grafts. The LITA was harvested in a skeletonized fashion. A heated water mattress was used to keep all patients normothermic throughout the operation. OPCAB has followed the pattern at our service. Briefly, with systemic heparinization to achieve an activated clotting time exceeding 250 seconds, occlusion of the coronary artery was accomplished by using a proximal soft silicone snare. The distal anastomosis was accomplished with a 7-0 running polypropylene suture. The vein top ends were then attached to the ascending aorta using side-bite clamping. An Octopus 3 (Medtronic, Inc, Minneapolis, MN) suction stabilizer was used in all cases. Before chest closure, and in the presence of left pleura opening, the site of pleural drain insertion was randomized. A soft tubular straight PVC drain (¼ inch) was inserted and exteriorized at the intersection of the sixth left intercostal space (Group II) or a curved one at the subxyphoid region and positioned in the left costophrenic sinus (Group SI). In all patients, a straight mediastinal drain was also placed via a subxyphoid approach.

All patients were transferred to the intensive care unit (ICU) with orotracheal intubation, inspired oxygen fraction to keep arterial oxygen saturation above 90%, predicted tidal volume of 8 ml/kg, PEEP of 5 cmH2O and extubated according to ICU protocol. The drains (mediastinal and/or pleural) were routinely removed on POD2.

All patients underwent to the same analgesic protocol administered during the postoperative period (100mg of tramadol chlorhydrate 4 times a day). Pain was evaluated and quantified by Visual Analogical Scale (VAS)[10] (0 = no pain to 10 = unbearable pain) on POD1 and before spirometry. Total orotracheal intubation time and length of hospital stay after surgery were also recorded.

The patients were undergoing chest radiography on preoperative, POD1, POD3 and POD5 for monitoring respiratory events, like pleural effusion and atelectasis. The radiological evaluation was performed by the same radiologist, blinded to the study. The pleural effusion was deemed significant when exceeding the costophrenic angle. Atelectasis was acknowledged when a clear atelectasis radiologic shadow exceeded 15 mm in width, with linear atelectasis being disregarded in this study.

Data were expressed as mean ± standard deviation. The FVC, FEV1 were analyzed, and values are expressed as a percentage of the preoperative value considered as 100% the preoperative baseline value. Intragroup variables comparing pre versus postoperative values were evaluated by paired Student t tests and analysis of variance for repeated measures with the Newman-Keuls posttest. Differences between groups were analyzed by unpaired Student t test or the Mann-Whitney test, when necessary. The categoric data were analyzed by the Pearson chi-square test. Statistical analysis was performed with GraphPad Prism 3.0 software (Graph-Pad Software Inc, San Diego, CA). A value of P<0.05 was considered statistically significant.

Initially, 165 subjects were selected for this study, however, 95 were excluded in the pre- and intraoperative, 14 were lost to follow-up and 56 were actually analyzed according to Figure 1. Groups were homogeneous preoperatively in terms of age, gender, body mass index (BMI), preoperative pulmonary function, operative time, number of grafts per patients with no significant statistically differences, as shown in Table 2. 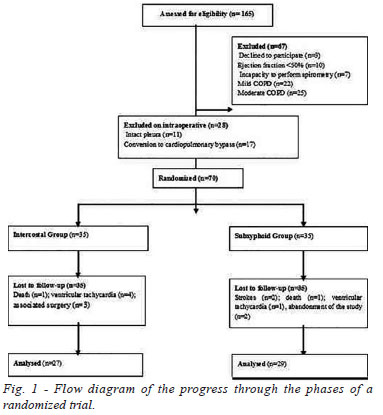 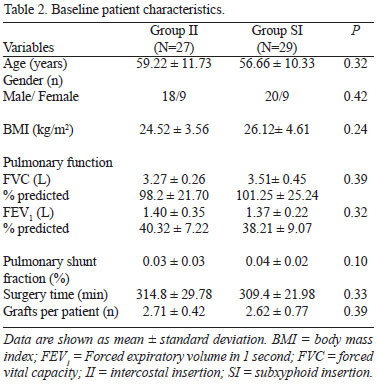 No signs of preoperative myocardial infarction were detected in either group, as assessed by electrocardiographic changes or enzyme elevation.

In the postoperative period, the both groups presented significant reduction in spirometric parameters (FVC and FEV1) until POD5 (P<0.05). However, when compared the values, the SI group presented lower impairment (Figure 2). 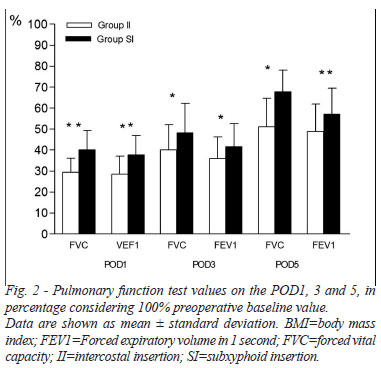 The results demonstrated that both groups presented impairment in pulmonary function in the early postoperative. However, the patients of SI group presented better pulmonary function and clinical outcomes when compared to II group. This data corroborate with findings by other studies with patients without COPD[5,11].

The lung dysfunction in postoperative period after CABG is associated with intraoperative procedures. The use of general anesthesia[12], the sternotomy[13], cardiopulmonary bypass[5], ITA graft with consequent pleurotomy and necessity of pleural drain insertion make the pulmonary dysfunction unavoidable[14].

The use of ITA graft for coronary revascularization is associated with higher survival and less incidence of cardiovascular events when compared to saphenous vein graft[15]. The technique of skeletonized ITA dissection has been proved beneficial to reduce sternal complications or infections, due to better preservation of arterial branches supplying sternal and intercostal muscles[16]. Beyond reduction of blood supply, the manipulation of ITA may lead the opening of parietal pleura[17]. Consequently to pleurotomy, pleural drainage becomes mandatory. In the majority of the operations, the chest tube is inserted and exteriorized in the intercostal space, coming into contact with the periosteum and the parietal pleura, which are highly sensitive. Therefore, the use of intercostal chest tube can promote ventilatory-dependent pain, limiting deep inspiration, which leads to the adoption of an antalgic posture, immobilization and reduced lung volumes and capacities[18].

Recent studies have evaluated the postoperative clinical follow-up of patients undergoing CABG, with exteriorization of the drain in the subxyphoid region, and concluded that this strategy minimizes the pulmonary dysfunction in postoperative period, with better spirometric parameters, lower rate of atelectasis and pleural effusion, and lower pain intensity[6,7,11]. Furthermore, Guizilini et al.[19] observed that the insertion of a chest tube in the subxyphoid region resulted in similar findings to CABG with intact pleura.

Taking into account evidence that shifting the site of drain insertion to the subxyphoid region may be beneficial for the postoperative clinical outcomes, and the fact that patients with severe COPD have a higher risk of pulmonary complications in this period, this study aimed to answer the following question: Do patients with clinically severe COPD would benefit by shifting the drain position in the postoperative period of OPCAB using the LITA graft? For our knowledge, no randomized controlled trial has evaluated the impact of drain shifting in severe COPD patients undergoing OPCAB, which makes our proposal innovative and original.

Previous studies compared the effectiveness of shifting the drain insertion site to the subxyphoid region and reported lesser lung function impairment[6,11,19]. These findings corroborate the results found in this study, reiterating the hypothesis that subxyphoid drain minimizes the dysfunction in postoperative period of OPCAB surgery, even in patients with severe COPD.

Regarding the chest pain, patients with subxyphoid drain reported less intensity on VAS. The same result was reported in other studies with patients without COPD, which showed less pain when the chest tube was inserted in the subxyphoid region[6,11,21]. Similar outcomes were found in this study.

Sensoz et al.[11] evaluated patients with COPD undergoing on-pump CABG by means of computed tomography. Patients who belonged to the group with pleural drain in subxyphoid region evolved with a lower incidence of atelectasis in postoperative period, corroborating the results found in this study.

Hypoxemia is also an unavoidable consequence in CABG postoperative, regardless of surgical technique[5,6]. There are many causes of hypoxemia, abnormal diffusion, hypoventilation and shunt. In this study, the pulmonary shunt fraction was assessed on the first postoperative day, which was significantly lower in the subxyphoid group.

These findings could be explained due to better preservation and recovery of FVC and consequently decrease of pulmonary fraction shunt, reflects the chest wall lesser degree of trauma in patients with pleural subxyphoid drain.

Fuster et al.[2] associated severe COPD with higher incidence of pneumonia, sepsis and respiratory distress syndrome, longer ICU stay, and greater number of hospitalization days in the postoperative period of coronary revascularization. Saleh et al.[1] found that COPD severity is a significant prognostic marker in clinical outcomes after CABG. In this study, we found similar results; however the SI group presented shorter mechanical ventilation time and length of hospital stay, which may be reflected in reduced hospital costs, although this finding was not evaluated.

This study has some limitations. The assessment of patients after surgery was not blind because of the possibility to visualize the drain position in the rib cage, with exception of radiological analyses; however the spirometry was performed according to ATS standardization to confirm the airflow limitation, by the same evaluator, reducing the evaluation bias. Furthermore, the sample size was limited by the tight inclusion criteria restricted to severe COPD.

Considering the results of this study and others, it is clear that CABG elicits postoperatively pulmonary dysfunction and may exacerbate in the existence of comorbidities such as COPD. Drain shifting to the subxyphoid region is recommended for further decreasing trauma to the chest and can be an alternative to minimize the postoperative pulmonary dysfunction in this group of patients.

WJG: Review of the manuscript