Since its introduction in the 1960s, coronary artery bypass grafting (CABG) is the most studied surgical procedure in medical history and rapidly as the standard treatment for patients with extensive coronary artery disease[1].

In the last decades, there has been a significant decline in short-term mortality for this procedure. This work can be attributed to an improvement in the surgical technique combined with the significant progress in perioperative care, as well as the development and diffusion of databases that provide a better definition and understanding of variables that impact on mortality after CABG[2-6].

This stabilization of mortality is a challenge for the discovery of new variables to predict mortality in order to further improve the care related to this procedure. In this context, due to its close correlation with ventricular parietal stress and clinical and hemodynamic variables that determine a higher cardiovascular risk, B-type natriuretic peptide (BNP) has been investigated as a new prognostic tool to predict mortality in cardiac surgery[7-9].

In this study, the objective is to evaluate whether the preoperative BNP concentration is an independent predictor of short-term all-cause mortality in patients undergoing on-pump coronary artery bypass grafting (OPCABG).

The OPCABG were performed by median transsternal thoracotomy with extracorporeal circulation, aorta-bicaval cannulation, transverse aortic clamping and antegrade and retrograde cardioplegia using normothermic blood solution. Patients were treated according to European and American guidelines in force at the time[10].

The data were prospectively collected through a computerized database of the Hospital de Base of São José do Rio Preto for an average follow-up period of 30 days. The study protocol was approved by the local ethics committee (CAAE 53306916.8.0000.5415).

Variables included in the study were demographic, preoperative comorbidities, degree of left ventricular systolic dysfunction, intraoperative variables, and all-cause mortality in 30 days. The definition of all variables, as well as the indication and performance of the surgical procedures are based on the guidelines published by the European Society of Cardiology and European Association for Cardio-Thoracic Surgery[10].

The serum concentration of BNP was measured in the immediate preoperative period (24 hours before surgery) in all surgeries by the electrochemiluminescence method using the Siemens ADVIA Centaur equipment (Siemens Medical).

Categorical variables were presented in absolute numbers (percentages) and the continuous variables in mean and standard deviation or median and interquartile ranges (Q3-Q1), according to the type of distribution.

Statistical analysis was performed with SPSS software (version 20.0). The power to discriminate the preoperative serum concentration of BNP to predict all-cause mortality within 30 days after surgery was determined by calculating the area under the Receiver Operating Characteristic (ROC) curve, value > 0.60 considered as not determined by chance.

In this study, the risk analysis with the Cox proportional regression model was used to establish the relationship between the dependent variable (all-cause mortality in 30 days) and the exploratory variables. Univariate variables related to mortality (P≤0.05) were considered for multivariate regression analysis. Independent predictors of mortality were established for the variables with P≤0.05 in the multivariate analysis. 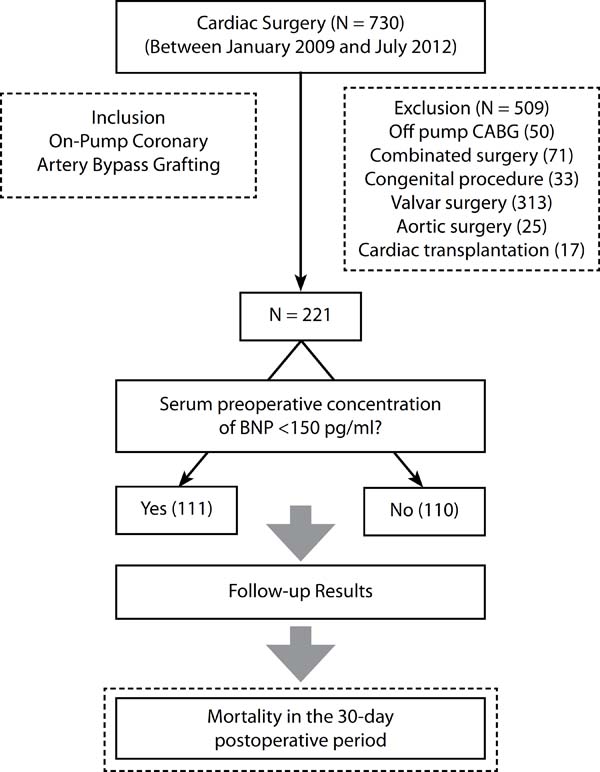 The baseline characteristics of patients undergoing OPCABG evaluated in this study are summarized in Table 1. The median age was 60 (52-67) years and 66% were men. Among the 221 patients, 70 (32%) were diabetic, 192 (87%) had systemic arterial hypertension. Eighty-two (37%) patients had urgency or emergency surgery, 74 (33%) patients were operated in the presence of acute coronary syndrome, 43 (19%) patients had moderate or significant left ventricular dysfunction. Intra-aortic balloon pump was implanted in the preoperative period in 13% of the patients and the mean duration of cardiopulmonary bypass was 94 minutes.

Mortality from all Causes in the 30-day Follow-up Period 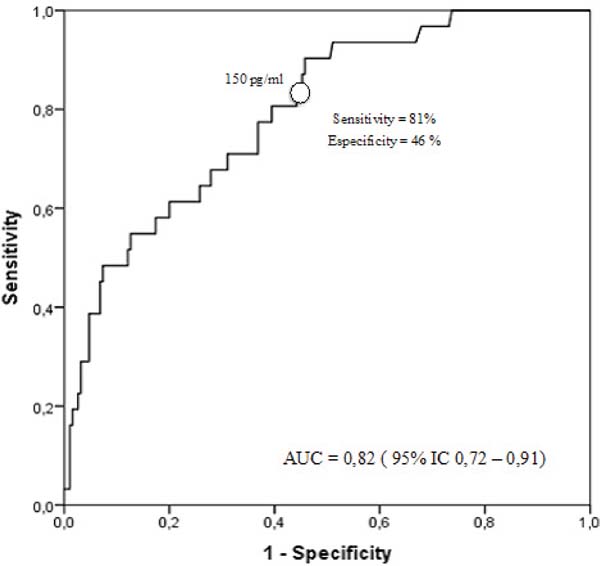 Table 2 - Univariate and multivariate analysis by the Cox Regression model for mortality in the 30-day postoperative period.

Table 2 - Univariate and multivariate analysis by the Cox Regression model for mortality in the 30-day postoperative period. 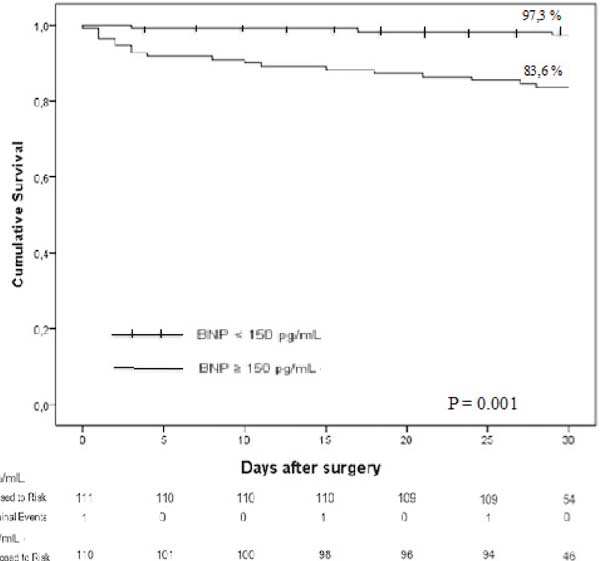 Predictors of short-term mortality in CABG have been well established in the last decades. Consequently, risk stratification systems were created with the objective of predicting shortterm mortality after CABG and the most employed in the USA and Europe are, respectively, the STS risk score and EuroSCORE II. Widely validated in thousands of patients in a multicenter database, these systems have contributed to a progressive decline in mortality in the short-term and are recommended as a gold standard model for risk stratification in CABG[8,11-15]. It is necessary to identify new variables capable of improving and better predict short-term results in myocardial revascularization surgery. In this context, the role of preoperative serum BNP concentration as a risk stratification instrument in cardiac surgery has been investigated and further studies are needed to determine the actual clinical usefulness of BNP in relation to already validated risk stratification systems[16,17].

Regarding all-cause surgical mortality, our group found significant preliminary results in a group of patients underwent cardiac valve or CABG, demonstrating a significant association between higher preoperative serum BNP concentration and short-term mortality[16,17]. According to these findings, a systematic review by Litton & Ho[21] showed a correlation between the preoperative serum BNP concentration and mortality, however due to the slightly relevant accuracy, the authors recommended in their study the clinical use of Judiciously.

Few studies specifically evaluated the preoperative BNP concentration in relation to mortality after OPCABG. In a study by Fox et al.[22], the peak perioperative serum BNP concentration (preoperative up to the fifth postoperative day) was independently correlated with the combined outcome of hospitalization or death from heart failure in 5 years of follow-up. This study warned the need for clinical studies to evaluate whether a medical therapy focused on reducing the perioperative concentration of BNP would be able to reduce events after OPCABG.

At the present time, our study is original when it was designed methodologically with the specific purpose of evaluating the preoperative serum concentration of BNP and the short-term mortality after OPCABG, adding information to the scarce literature on the subject. An important prognostic function of this hormone in myocardial revascularization surgeries was shown. From the pathophysiological point of view, it is implicit that higher levels of BNP correlate with greater ventricular parietal tension, myocardial ischemia and its secretion and mechanism of action have a cardioprotective effect in the attempt to promote systemic and coronary arterial vasodilation, as well as venodilation with reduction of pre and post loading and improvement of cardiac index[9,23].

The relevance of the topic is evident, since the natriuretic system is currently the focus of great therapeutic perspective in cardiovascular medicine. Although metanalysis still shows uncertainties regarding the use of BNP to guide treatment in patients with HF, the emergence of drugs (LCZ 696) acting directly on the enzyme system (neprilysin inhibitors) responsible for the degradation of BNP demonstrated a significant reduction in cardiovascular mortality in patients with heart failure and its clinical use is already authorized by regulatory agencies in some countries[24,25].

Our group believes that the high preoperative serum BNP concentration characterizes a group of patients with a higher risk of death in myocardial revascularization surgeries and that new therapies guided by the level of BNP and drugs acting on its metabolic pathway may come to collaborate for a possible additional reduction of mortality after this surgical procedure.

A limitation of our study consists of a relatively small number of patients followed up, however, it can still be considered one of the largest studies among those related on the subject in the literature.

The preoperative serum concentration of BNP is a strong independent predictor of all-cause mortality during the 30-day postoperative period in patients undergoing OPCABG.

JAMJ Substantial contributions to the conception or design of the work; or the acquisition, analysis, or interpretation of data for the work; drafting the work or revising it critically for important intellectual content; agreement to be accountable for all aspects of the work in ensuring that questions related to the accuracy or integrity of any part of the work are appropriately investigated and resolved; final approval of the version to be published;

MNM Agreement to be accountable for all aspects of the work in ensuring that questions related to the accuracy or integrity of any part of the work are appropriately investigated and resolved; final approval of the version to be published;

MPF Agreement to be accountable for all aspects of the work in ensuring that questions related to the accuracy or integrity of any part of the work are appropriately investigated and resolved; final approval of the version to be published;

MJFS Agreement to be accountable for all aspects of the work in ensuring that questions related to the accuracy or integrity of any part of the work are appropriately investigated and resolved; final approval of the version to be published;

IHG Agreement to be accountable for all aspects of the work in ensuring that questions related to the accuracy or integrity of any part of the work are appropriately investigated and resolved; final approval of the version to be published;

CCS Agreement to be accountable for all aspects of the work in ensuring that questions related to the accuracy or integrity of any part of the work are appropriately investigated and resolved; final approval of the version to be published;

MFG Agreement to be accountable for all aspects of the work in ensuring that questions related to the accuracy or integrity of any part of the work are appropriately investigated and resolved; final approval of the version to be published.