The superior cavopulmonary connection (SCPC) operation represents one of the stages for the surgical palliation in patients with functionally univentricular hearts. This operation may or may not be preceded by a first stage palliation; however, it is well known that this operation results in more efficient oxygenation than the systemic pulmonary shunt with the advantage of avoiding the volume or pressure overload of the single ventricle[1]. There are two basic surgical techniques for creating a cavopulmonary connection, the bidirectional superior cavopulmonary anastomosis (bidirectional Glenn operation) and the Hemi-Fontan operation. In those patients who have an interruption of the inferior vena cava with azygous or hemiazygous continuation, a bilateral superior cavopulmonary connection operation is performed with all the systemic venous return is directed to the pulmonary circulation except for the portal venous return, this operation is called "Kawashima operation"[2]. However, the development of pulmonary arteriovenous malformations and pulmonary arteriovenous fistulae remains a potential complication following Kawashima operation[2-6]. The patients who survive the SCPC operation are potential candidates for the final palliative procedure: the Fontan operation[7].

This study aimed to analyze the outcomes of SCPC operations in our center and to identify factors affecting the survival and the progression to Fontan stage.

Between 2005 and 2015, 161 patients with single ventricle physiology due to variable congenital heart defects underwent SCPC in our center, Rajaie Cardiovascular Medical and Research Center. In a retrospective study, the outcomes of these patients concerning the clinical conditions, the survival rates, and the progression to the final palliative stage were analyzed (Fontan stage). Baseline demographics, preoperative, and intraoperative data were collected from their charts. This study protocol was approved by the local ethics committee in our institution.

The patients were regularly followed up in the outpatient clinic (1 week and 1 month after surgery, then every 3 months), with complete physical examination and transthoracic echocardiography (TTE). The follow-up data were obtained from chart review, with special attention to survival and the completeness of the final palliative stage.

The main diagnostic device was the TTE for both preoperative diagnosis and postoperative follow-up. For further anatomical evaluation and especially for measuring the mean pulmonary artery pressure (mPAP), cardiac catheterization was performed preoperatively in 113 (70%) patients. For those patients who had not undergone cardiac catheterization, the PAP was measured intraoperatively. Additionally, computed tomographic angiography (CTA) was performed in 90 (55.9%) patients.

Median age at SCPC operation was 5±4.9 years (range 9 months to 24.5 years), and 54% of the patients were male (87 patients). Mean mPAP preoperatively was 13±3.6 mmHg (range 7-27 mmHg). The most common congenital heart defect in our patients was tricuspid atresia (60 patients, 37.3%). The underlying congenital heart defects are summarized in Table 1.

a All values are presented as number (%). 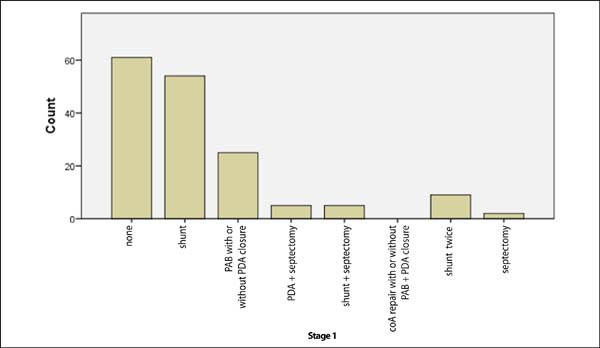 The type of the SCPC operation was right SCPC in 128 (79.5%) patients, left SCPC in seven (4.3%), bilateral SCPC in 18 (11.2%), hemi-Fontan in two (1.2%), and Kawashima operation in six (3.8%) (Figure 2). The operation was carried out using cardiopulmonary bypass (CPB) except for 22 patients in whom right SCPC was performed without CPB (13.7% of the cohort). The azygous (or the hemiazygous) vein was ligated and divided in 96 (59.6%) patients. Previous systemic pulmonary shunt (if existed) was taken down in 75% of the cases, without any effect on the outcomes. Concomitant operations at the time of SCPC included: repair of pulmonary artery branches (n=8), atrioventricular valve repair (n=3), total anomalous pulmonary venous connection (TAPVC) repair (n=2), and atrial septectomy (n=2). 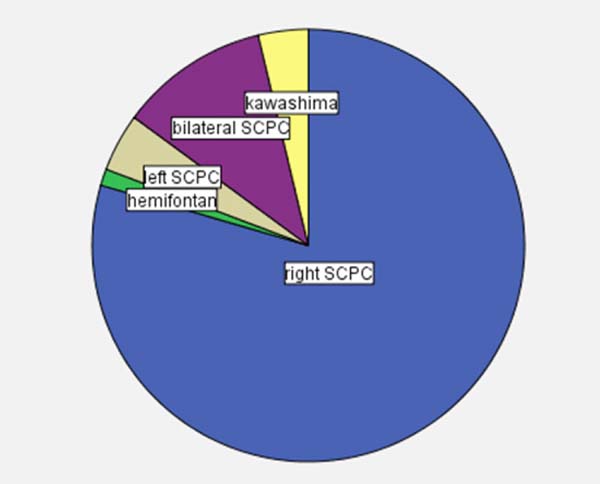 Four (2.5%) patients died in the hospital due to pulmonary infection (two patients), failure of the SCPC which was taken down (one patient), and low cardiac output syndrome with disseminated intra vascular coagulation (one patient). The characteristics of these patients are summarized in Table 2. Mean mPAP in this group of patients (in-hospital mortality) was 20±1.63 mmHg, which was significantly higher than that in the survived patients (12.85±3.44 mmHg), (P=0.001). Two patients underwent takedown of the SCPC on the same day of operation; one of them died in the hospital and the other was alive after a 2-year follow-up period. Twelve (7.5%) patients suffered from prolonged pleural effusion (> 14 days), with three of them having chylothorax.

a age at operation in years,

Median follow-up time after the SCPC operation was 3.1±1.9 years (range 6 months to 10 years). Two (1.27%) late deaths occurred during the follow-up period, both of them due to heart failure. The rate of freedom from mortality in the follow-up period was 96.27%. Thirty-seven (23.57%) patients underwent total cavopulmonary connection (TCPC), and 99 others (63%) are waiting for TCPC. Thirteen (8.3%) patients were not candidates for TCPC due to high PAP (7 patients of whom three patients underwent takedown of the SCPC), poor development of pulmonary arteries (three patients), ventricular dysfunction (two patients), and viral hepatitis (one patient). No patient (especially from those who underwent Kawashima operations) developed pulmonary arteriovenous fistulas during the period of this study.

Takedown of the SCPC

Table 3 - Characteristics of the takedown patients.

a age at SCPC operation in years,

Table 3 - Characteristics of the takedown patients.

The early mortality rate after SCPC operation in our study was 2.5%. Five (3.1%) patients underwent takedown of the SCPC of whom two at the same operation day and three later during the follow-up period. The rate of exclusion from the TCPC was 8.3%. Statistical analysis revealed that elevated mPAP preoperatively and the prior palliation with PAB were risk factors for both early mortality and takedown of the SCPC; however, the age, the morphology of the single ventricle, and the type of SCPC were not considered risk factors. The diagnosis of large multiple ventricular septal defects or the upstairs downstairs ventricles with double outlet right ventricle or double outlet left ventricle was associated with poor outcomes but due to the small number of patients a statistically significant correlation could not be found.

Preoperative mPAP has been reported as a risk factor for death after the Glenn procedure[8], and mortality in those receiving pulmonary artery banding was high[9], and these findings were compatible with ours. From our perspective it is essential to protect the pulmonary vascularity in patients with single ventricle and unrestricted pulmonary blood flow since that the PAP importantly affects the results of the surgical palliation in these patients.

There is no consensus regarding the ideal time for performing the SCPC in patients with single ventricle[10] . Age did not seem to influence the outcomes; however, we recommend surgery as earlier as possible, although other logistic factors such as the availability of specialized centers and physicians may affect the trend to perform the SCPC earlier.

The elimination of an accessory pulmonary blood flow (prior systemic pulmonary shunt) at the time of SCPC operation did not affect the outcomes. On the other hand, some studies suggested that this may be advantageous on a long-term basis[11].

The retrospective nature of this study is one of its main limitations, and the short follow-up period in some patients was another considerable one.

The SCPC operation is an essential stage for the surgical palliation in patients with univentricular heart and can be performed with a low rate of mortality and morbidity; however, the elevated mPAP and the prior palliation by PAB remain an important risk factors for poor outcomes.

AAD Substantial contributions to the conception or design of the work; final approval of the version to be published

MGD Final approval of the version to be published

GO Final approval of the version to be published

AS Drafting the work or revising it critically for important intellectual content; final approval of the version to be published

AHJ Drafting the work or revising it critically for important intellectual content; final approval of the version to be published

RSA Drafting the work or revising it critically for important intellectual content; final approval of the version to be published

MM Final approval of the version to be published

MS Acquisition, analysis, or interpretation of data for the work; final approval of the version to be published