INTRODUCTION: The search of the understanding of etiological factors, mechanisms and treatment of the diseases has been taking to the development of several animal models in the last decades. OBJECTIVE: To discuss aspects related to animal models of experimentation, animal choice and current trends in this field in our country. In addition, this study evaluated the frequency of experimental articles in medical journals. METHODS: Five Brazilian journals indexed by LILACS, SciELO, MEDLINE, and recently incorporate for Institute for Scientific Information Journal of Citation Reports were analyzed. All the papers published in those journals, between 2007 and 2008, that used animal models, were selected based on the abstracts. RESULTS: Of the total of 832 articles published in the period, 92 (11.1%) experimentation papers were selected. The number of experimental articles ranged from 5.2% to 17.9% of the global content of the journal. In the instructions to the authors, four (80%) journals presented explicit reference to the ethical principles in the conduction of studies with animals. The induced animal models represented 100% of the articles analyzed in this study. The rat was the most employed animal in the analyzed articles (78.3%). CONCLUSIONS: The present study can contribute, supplying subsidies for adoption of future editorials policies regarding the publication of animal research papers in Brazilian Journal of Cardiovascular Surgery.

The first historical accounts of the use of animals by medical doctors come from Babylonian medicine with a practice called Aruspice - the art of making diagnoses and prognoses based on the observation of the internal organs of animals sacrificed for this purpose.

Since then, the attempt to comprehend the etiological factors and mechanisms and to treat diseases has led to the development of several animal models [1,2]. Thus, animal models are being used in all areas of biological research.

Four basic categories of animal models can be identified in the literature [3]:

Using computers or isolated organs, several experimental models have been developed that simulate physiological situations, however, even with all the accumulated knowledge, animal models are still fundamental.

Just to highlight the importance of animal experimentation today, scientific meetings are held with the sole purpose of discussing animal models, as, for example, the one that took place in the University of Siena involving around 80 researchers who considered new mechanisms to induce chronic obstructive pulmonary disease and to perfect the existing techniques [4]. Similarly, there are scientific journals, such as the Acta Cirúrgica Brasileira, whose main mission is to report on results of research obtained from experimental surgery.

Thus, the aim of this article is to discuss aspects related to animal experimentation models, the choice of animal and the current trends in this field in Brazil. Additionally, this work attempts to evaluate the space occupied by experimental articles in scientifically renowned medical journals to provide data that support the adoption of specific editorial policies to publish this type of study.

Five Brazilian journals indexed to LILACS, (Latin-American and Caribbean Literature in Health Sciences), SciELO (Scientific Electronic Library Online), MEDLINE/PubMed and recently incorporated by the Institute for Scientific Information Journal of Citation Reports (Thomson Scientific) were selected for this study. The characterization of these journals is shown in Table 1. 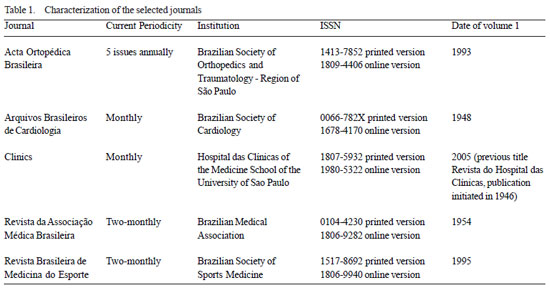 It is important to mention that two journals that in principle filled the inclusion criteria of this study were not analyzed: the first, Acta Cirúrgica Brasileira, as it basically publishes original research articles on experimental surgery as this is the scope of the publication and the second, the São Paulo Medical Journal, as it did not publish any articles on animal experimentation in the analyzed period.

All the articles published in these journals in 2007 and 2008 that employed animal models were selected by the abstract in Portuguese or English.

For all the selected articles, the animal utilized was identified and the study was classified according to the type of experimental model employed (induced, spontaneous, negative and orphan).

Of the total of 832 articles published in the four selected journals in 2007 and 2008, 92 (11.1%) reported studies involving animal experimentation.

The number of articles that involved animal models is variable in the different journals with frequencies that ranged from 5.2% to 17.9% (Table 2).

In this period, experimental studies were mixed with other original articles except for the journal Clinics that has a specific section denominated Basic Research exclusively for animal experimentation.

In the instructions for authors of four (80%) of the participating journals, there is an explicit reference to the ethics principles concerning studies involving animals. However, the instructions for authors of the Revista da Associação Médica Brasileira only mention the necessity of the approval of the Institution's Research Ethics Committee in which the study was carried out.

All of the articles involving animal experimentation indentified in this study used the induced model; no studies employed spontaneous, negative or orphan models.

The principles for the use of animals as an experimental model and for the transposition to human physiology were introduced by Claude Bernard at the end of the XIX century. At that time, this researcher emphasized the applicability of animal experimentation for humans by means of physical and/or chemical situations that resulted in alterations in animals similar to those provoked by disease [97].

An animal model should have the following characteristics [97]:

The choice of an animal experimentation model is determined by factors including the cost, technical viability of the procedure, the available infra-structure and scientific principles [98-100].

According to Schanaider & Silva [2], most research in the basic area, is undertaken using small animals; mice, rats, hamsters and guinea pigs total almost 90% of the species utilized in laboratories.

Similarly, the traditional use of some species has made several experimental models sacred. For example, the rat is widely used for studies of diseases that involve the respiratory tract such as asthma and bronchitis.

According to Fagundes & Taha [97], in a study based on the PubMed, LILACS, SciELO electronic databases and the Cochrane Library in a period of four years, the rat was the most commonly used animal in research, followed by the mouse, rabbit, dog, pig and primates. According to these authors, about 85% of the experimental articles in PubMed and 70% in LILACS utilized rats and mice. These data are corroborated by the data of the current study in which 78.3% of the studies employed rats as the experimentation model. The dog, which was frequently used in the past for experimentation, was utilized in only one study, reflecting the changes in specific legislation.

In the attempt to comprehend etiological factors, mechanisms and the treatment of diseases using other species of animals as a model has also posed the difficult task of extrapolation of the results of these models to human beings.

The reproduction of the pathological conditions in animal experimentation produces a series of intrinsic limitations to the complex etiopathogenic and physiopathologic mechanisms. Hence, although these limitations do not invalidate the utilization of experimental models, much caution is required in the interpretation of results [101]. Although rats and men clearly share many basic physiological processes, each animal model should be seen as a component of a process in the study of disease and not in isolation or extrapolated directly to man [102].

This difficulty of extrapolating the data obtained in research with animals to man, together with the absence of an infrastructure to perform experimental studies, may explain the still small number of articles on basic research found in Brazilian journals compared with those of other countries. However, we observed that the number of articles on basic science has increased over recent years, a trend that has started to be seen in the Brazilian Journal of Cardiovascular Surgery (BJCVS).

The current study may contribute by providing support to adopt future editorial policies in respect to the publication of original articles in animal research in the BJCVS.