The presence of large lead vegetations poses additional difficulties for explantation because many methods cannot be used due to the potential hazard of embolism. We report two patients with large vegetation on the ventricular lead due to endocarditis and one of them with an atrial septal defect associated. It was applied a combined technique of transvenous lead removal and sternotomy with cardiopulmonary bypass for the complete removal of pacemaker wires. This procedure resolved the pacemakers endocarditis safely and subsequently a new transvenous device was placed on the opposite site.
INTRODUCTION

Infections involving implantable electrophysiologic cardiac devices are increasing due to the wide use of these implants all over the world. It causes severe morbidity and mortality results and required complete device replacement [1]. Several studies of pacemaker endocarditis strongly support the complete removal of the device, and the availability of technology that let the device be extracted by percutaneous route has facilitated the no operative removal [2]. Sometimes that approach is not possible to perform. The presence of large lead vegetations or a septal atrial defect poses additional difficulties for explantation as many methods cannot be used because the potential hazard of embolism. Besides this, the procedure is not 100% effective and it could fail. In a few cases combined techniques (transvenous lead removal and by sternotomy with extracorporeal circulation) are necessary [3].

We described both patients with large vegetation on the ventricular lead due endocarditis and one of them with an atrial septal defect associated.

We present a 62-year-old male with a VVI pacemaker because he suffered an episode of sudden death eight years before; the patient was refered to us and we ignore the primary indication for the pacemaker. Due to spontaneous pocket dehiscence, the generator was removed, the electrodes left in place and a new device was implanted, these procedure was carried out in another institution. Five months later, he started with fever and chills, and antibiotics were given several times with transitory recovery. All sets of blood cultures taken previously were negative.

On February 2005 (three months after the first episode of fever and chills), he was referred to our institution due to an ischemic stroke confirmed by CT scan, with ad-integrum recovery. Chest-X-ray showed abnormal lead implantation. Transesophageal echocardiography (TEE) verified vegetations on the pacemaker leads (1 x 2.5 mm) and positioned through an atrial septal defect on the left apex; tricuspid valve was not affected. Ventilation/perfusion study revealed a high probability of pulmonary embolism. Three sets of blood cultures were taken and antibiotic therapy with vancomycin and cefepime was started. Laboratory reported hematocrit 31%, leucocytes 9800 g/l, sedimentation rate 20 mm, C-reactive protein 26.2 mg/dl and a negative rheumatoid factor.

We decided pacemaker lead removal by surgical treatment for the risk of obstruction to main stem of pulmonary artery. The electrodes were removed directly by sternotomy with extracorporeal circulation: This approach was decided on the basis of vegetations size. During surgery, simple pull back of the electrodes from the right atrium did not allowed the complete extraction, requiring a simultaneous percutaneous procedure. During surgery we corroborated that ventricular lead was placed on the left side of the heart through an atrial septal defect, closed with a patch of autologous pericardium (Figure 1).

The diagnosis of the arritmia was node disease. Blood and leads cultures were both negative. Ten days after the surgery, a new device was placed transvenous on the opposite side and he was discharge to his home on outpatient parenteral antibiotic therapy, completed 6 weeks of treatment. Currently, the patient has a good clinical status and has no evidence of relapses.

We present a 61-year-old woman with dilated myocardiopathy due to Chagas's disease who needed a DDD pacemaker in year 2000. In November 2004, she started with fever and chills and recurrent episodes of apparently respiratory infections. Blood cultures were always negative and several antibiotic treatments were administered with transitory recovery.

In March 2005, she was hospitalized due to a new episode of fever and chills. TEE was performed and vegetation (40 x 9.7 mm) on pacemaker electrode was found. Laboratory data showed: hematocrit 30%, leucocytes 12700 g/l and acute renal failure which required hemodyalisis. Four sets of blood culture were negative. Vancomycin and cefepime was started. Transvenous pacemaker lead removal was contraindicated in this case due to the size of the vegetation. A sternotomy with extracorporeal circulation was performed and the electrodes were extracted with a large vegetation (Figure 2), requiring a simultaneous percutaneous procedure because there were fibrotic adherences betwen the subclavian vein and the wires. Tricuspide valve was not affected. She needed vasoconstrictor drugs 24 hours after the surgery due vasoplegia. Staphylococcus aureus meticillin-sensitive growth from the cultures of the electrodes and vegetation.

Antibiotics were replaced by cefazolin and twelve days after a new device was placed transvenous on the opposite side. Five days after that procedure the patient was discharge on outpatient parenteral antibiotic therapy, completed 6 weeks of treatment. Currently the patient has a good clinical status; she is under chronic hemodyalisis treatment and has no evidence of relapses. 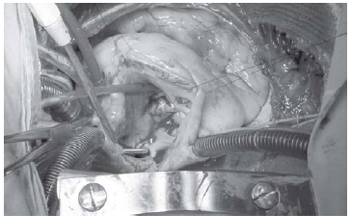 Fig. 2 - There is a large vegetation attached to the ventricular lead into the right atrium without affection of the tricuspid valve

The reported incidence of infection of the permanent system is between 0.3% and 12.6%. This may involve infection of the generator pocket or on the electrodes and may be associated with bacteraemia (1%-3%), with or without concomitant infective endocarditis. The mortality reported is around 35% [1].

Risk factors for pacemaker systems endocarditis include chronic conditions such diabetes mellitus, malignancies, immunosuppressive therapy, and local factors related to the pacing system, such as erosion of the pacemaker pouch and the number of previously inserted leads [2]. Voet et al. [4] reported that medical treatment has been successful in some cases, but there is increasing evidence that the entire pacing system should be removed to achieve complete infection eradication.

The simplest method for pacemaker lead extraction is direct, gentle manual traction; but it has many complications (tricuspid valve tears, damage of the right ventricular apex, arrhytmias). Intravascular approaches using wire loop snares, hook-tipped wires, bascket retrievers and grasping forceps have been described, but their use commonly results in disruption of the lead and complications associated [5].

Timing from pacemaker implantation to diagnosis of endocarditis is another variable that may favor surgical removal of the electrode system with cardiopulmonary bypass, after 12 month from implantation the electrodes are attached to the right endocardium and are embedded in a dence fibrotic plaque, making electrode removal by direct traction dangerous [6].

With transthoracic echocardiography, Klug et al. [7] observed vegetations in 30% of patients compared with 94% using transesophageal echocardiography. They managed these patients depending on the length of the vegetations: percutaneous technique when less than 10 mm long and on pump cardiac surgery when longer than 10 mm.

Miralles et al. [8] consider a surgical approach with sternotomy to be the safest method when leads have bigs vegetations. Despite the potential risks associated with operation, the risk of death from sepsis or pulmonary embolism is higher if the leads are left in place. When cardiopulmonary bypass needs to be avoided, the electrodes can be removed through a pursestring in the right atrium, but it is very difficult to remove all material successfully without detachment of vegetations or substantial blood loss. Anatomical atrial septal defect is a rare association with pacemaker endocarditis; we do not found any data reported about it.

Mortality factors for pacemaker endocarditis were described by Massoure et al. [9]. Complete removal of the device is required and associated with a favorable outcome. There are two options for pacing after removal, abdominal pacemaker or transvenous permanent pacemaker. In our experience we prefered inserted the new device transvenous in the contralateral site ten days after the extraction the infected pacemaker. In sixty consecutives cases presented by Massoure et al. [9] the new permanent pacing was implanted on average five days after extraction.

The management presented for Arnoni et al. [10] in four cases with pacemaker endocarditis and large vegetations included removal all the pacing sistem via full sternotomy and cardiopulmonary bypass, implanted the new abdominal pacemaker and four weeks with intravenous antibiotic therapy.