The single suture technique was developed to obtain stabilization and exposure of all all coronary branches during off-pump coronary artery bypass, while maintaining hemodynamic stabilily during the procedure. We describe the use of this technique during an off-pump correction of a coronary artery fistula associated with right coronary dilatation. The suggested technique is quicker and less complex than on-pump surgery. Furthermore, it can be a useful tool for congenital fistula correction in select cases, stimulating the practice of less invasive heart surgery in these patients.

The operation is indicated when clinical symptoms occur, such as cardiac insufficiency and myocardial ischemia, or the presence of a high flux fistula in an asymptomatic patient. Usually, the surgical correction is performed with the aid of cardiopulmonary bypass (CBP), however, the approach without ECC can be useful in selected cases [3].

The authors describe the surgical correction of a coronary arterial fistula without using extracorporeal circulation, by means of an alternative technique, using a single suture for the exposition of the branches of the right coronary artery.

Following general anesthesia, the transesophagic echocardiogram transducer was placed as usual. After the sternotomy and the opening of the pericardial bag, it was identified an increase in diameter of the right coronary artery and the presence of an arterial fistula. The fistulous tract was identified by the fremitus situated on the cardiac diaphragmatic wall.

The heart was mobilized and a single suture of Mercilene® 2.0 wire was performed on the oblique sinus of the pericardium, in an equidistant position between the inferior vena cava and the left inferior pulmonary vein and, afterwards, trespassed by double cardiac tape.

The operation table was moved to the Trendelemburg position and the two arms of the cardiac tape were tractioned downwards and sidewise, each arm on each side, as shown in Figure 1. 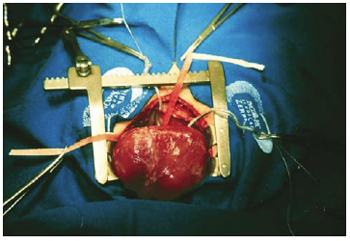 Fig. 1 - Exposure of the heart diaphragmatic wall by means of the single suture technique

A tourniquet was used in order to interrupt the flow through the coronary fistula after passing a stitch in "U", using a Mercilene® 2.0 wire with pledgets around the fistula (Figure 2). Therefore, the behavior of the hemodynamic and do flow of the fistula were evaluated by the transesophagic echocardiography, being performed, afterwards, the definitive closure the tourniquet's own wire. A specific approach for the dilation of the coronary artery was not performed. 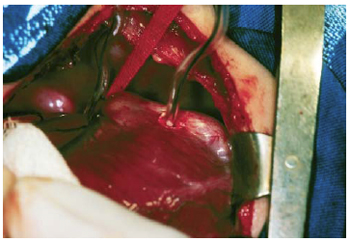 Fig. 2 - Interruption of flow of the fistulous tract with a tourniquet

During the operation no hemodynamic instability was observed. The patient left the ICU and the hospital on the 1st and 7th postoperative day, respectively, after clinical optimization and the performance of control transthoracic echocardiogram confirming the coronary fistula closure.

The congenital fistulous connections, between the coronary system and the cardiac chambers, are rare conditions that apparently represent the persistence of the embryonic and sinusoid intertrabecular spaces [1].

The occlusion of the fistulous tract can be performed by the intracavitary approach ligating the endocardic fistula, or by extracavitary approach, ligating the epicardic fistula, with optional usage of extracorporeal circulation. In a review article of 27 years of experience, Kamiya et al. [3] showed that only 20% of the cases were operated without ECC. In Brazil, Groppo et al. [5] published a report of three cases operated successfully, being only one of the pediatric group e without the usage of ECC. The usage of percutaneous treatment is an option in selected cases, presenting results similar to the surgical procedure.

The single suture technique has been largely used in the myocardial revascularization surgery with ECC. This technique was developed in order to obtain hemodynamic stability in the exposure of the coronary arterial branches during the surgery without ECC, especially the branches of the anterior and cardiac diaphragmatic wall [6]. This characteristic is vital in the correction of coronary arterial fistulas, for most of the fistulas injure the right coronary artery or the anterior interventricular artery. The circumflex branch is rarely severed. Furthermore, the fistulas are generally single and local connections [1].

The authors believe that three points are essential for the success of the operation:

1. The usage of different positions and degrees of traction of the arms of the cardiac tape in order to facilitate the exposure of the target coronary arteries, reducing the manipulation of the heart and the great vessels;
2. The usage of different positions of the operation table in order to obtain a better exposure of the heart;
3. The usage of a tourniquet followed by hemodynamic evaluation and echocardiographic confirmation of flow interruption through the fistulous tract, prior to the definitive procedure.

Therefore, the suggested technique is fast and less complex when compared to the surgery using ECC. It reduces the operation time, simplifies the procedure and can be a useful tool in the surgical correction of coronary fistulas. In addition, the described technique can motivate the practice of less invasive cardiac surgeries in these cases.