The Brazilian Medical Association (AMB) concerned about the future of scientific publications, after the release of the new QUALIS of CAPES, has been organizing since August 2009 a series of meetings at its headquarters in Sao Paulo, in partnership with the Brazilian Association of Scientific Editors - ABEC Brazil. The meetings resulted in an editorial called Classification of journals in the system QUALIS of CAPES - the change in criteria is URGENT! This editorial was signed by 62 editors of scientific journals and published in full in all of these journals and also in countless others mainly in the health science area, demonstrating that Brazil's periodicals are more and more committed to discussing the problems they share in common. 1

The scientific community remains concerned about the outlook, the direction and future of Brazilian journals 2,3. Thus, in the March 18 meeting, the editors present at the meeting were able to assess the effects of the first Editorial that was the basis for discussions at scientific meetings and events across the country. The latter meeting was attended by Dr. Lilian Caló, Coordinator of Science Communication and Evaluation of SciELO, which presented a comparative study of Brazilian journals in the database classified by two criteria: the first criterion according to the impact factor ISI/JCR, which uses only the journals indexed by Thomson Reuters, and the second was an index composed by simple addition of impact factors of ISI/JCR and SciELO. The impact factor SciELO that also considers citations from all of its basis journals, significantly modifies the number of citations obtained and, consequently, raises the impact factor of journals in Brazil. This fact was most evident with the demonstration presented by Dr. Caló of the percentage gain achieved by the journals with the adoption of the composite index. Clearly, associating other indexes, creating equivalence or several alternatives may favor the qualification of national magazines, improving their visibility and enhancing the international indexation. It should also be considered that Brazilian researchers are choosing to publish their works in foreign journals rather than in domestic journals. This choice improves the classification of the Graduate Departments to which they belong, earning them a higher impact factor and increasing the H index, and all this entirely and exclusively on account of the new revised criteria adopted by CAPES. The search for greater visibility and quality of Brazilian scientific production should not be assessed on the basis of articles alone, but rather by focusing on higher qualification of our journals in order to be internationally recognized.

Considering that the criteria have already been set for CAPES' current triennial assessment, the assembled editors decided to develop a second editorial containing a list of suggestions to be forwarded to the coordination of CAPES for the next assessment. The list of suggestions which complement the first editorial is as follows:

- Revision of criteria used by CAPES to classify the periodicals, suggesting the adoption of the composite impact factor calculated by summing up all of the impact factors of ISI/JCR and SciELO;

- Placement of ABEC Brasil (Brazilian Association of Science Editors) in the Scientific Technical Council of CAPES, so that the editors can be heard in the process;

- Request of the "Editor's Scholarship" with CNPq in order to aid scientific editing for publishers of Brazilian journals that receive support from the latter funding agency. This resource aims to improve the quality of journals for better dedication of their editors to editorial functions;

Moreover, the editors assembled decided to get support from the Brazilian Academy of Sciences, of FINEP and Deputy Eleuses Vieira de Paiva for his demands and suggestions. In a second step the editors will request a detailed breakdown from CNPq of the results and criteria adopted for allocation of resources of the Publishing Support Grants (Editais para Auxílio à Editoração). With this information the editors plan to build a database with information on annual budgets of Brazilian magazines that will be useful for benchmarking and mutual cooperation. The disclosure of both editorials and promoting continuous discussion remains our goal in order to get the recognition that national journals need and deserve. 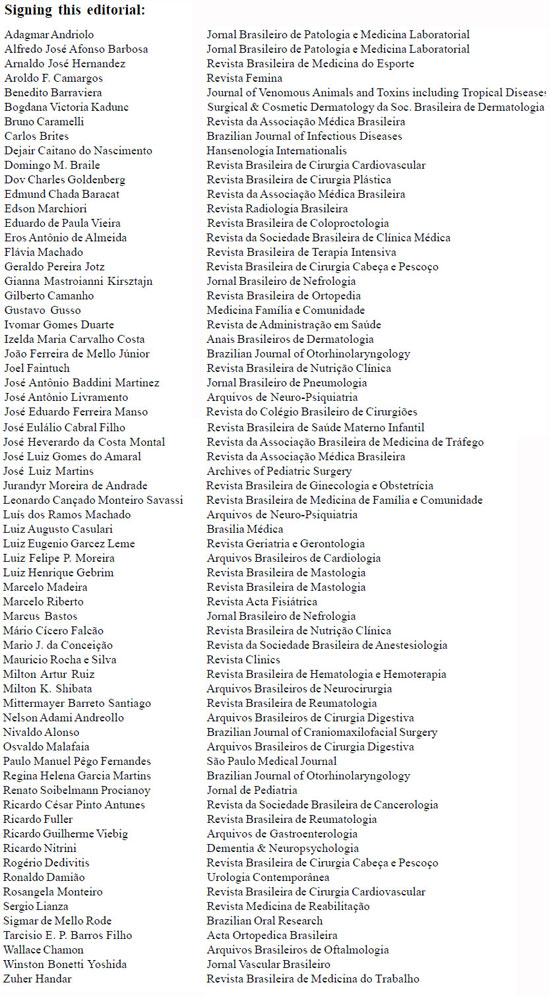