Objective: Cytomegalovirus (CMV) systemic disease and myocarditis in healthy persons is infrequently reported in the literature, although in increasing numbers in recent years. The importance of the recognition of the syndrome that usually has an initial picture of a mononucleosis like infection in an otherwise healthy person, is the available therapeutic agent, ganciclovir, that can cure the infectious disease. Methods: We analyzed the clinical result of pulsotherapy with steroids in a patient with CMV myocarditis after 7 days of etiological treatment, with ganciclovir, intravenous vasodilators, and the conventional treatment for congestive heart failure. Results: The clinical condition of the patient improved accordingly to the better function of the left ventricle, and the ganciclovir was kept for 21 days, most of it in an out patient basis. The patient was dismissed from the hospital, with normal myocardial function. Conclusion: Potentially curable forms of myocarditis, like M pneumoniae and CMV, for example, can have an initial disproportionate aggression to the myocardium, by the acute inflammatory reaction, that can by itself make worse the damage to the LV function. In our opinion, the blockade of this process by pulsotherapy with steroids can help in the treatment of these patients. We understand that the different scenario of immunosuppressive treatments for the possible auto immunity of the more chronic forms of the presumably post viral cardiomyopathy has been in dispute in the literature, and has stolen the focus from the truly acute cases.

The therapy of myocardial inflammation after viral aggression has been in dispute in the literature, particularly regarding the usefulness of pulsotherapy with steroids. For example, in the specific chapter of myocarditis of the world renowned textbook of cardiology edited by Eugene Braunwald, it is not even mentioned in the seventh and eight editions. In the sixth edition however, a more balanced view of the indication of pulsotherapy can be seen with the citation of bibliographies that recommend its practice[1-4].

In our point of view this difference can be explained by the different focus of papers dealing with this subject. The true acute form of the disease, with the clinical picture of the viral process and subsequent aggression to the myocardium, has been obscured by the more chronic forms after a long period of time from the acute viral disease when acute inflammation is of diminished intensity present. The surviving patients that overcome this phase can present variable degrees of cardiac failure, with a diagnosis of idiopathic cardiomyopathy.

The first situation of acute congestive heart failure (CHF) with interstitial myocardium edema, sinus taquicardia and impending cardiogenic shock is the most severe form, in which we consider the pulsotherapy with steroids potentially life saving, and in our case it was not followed by other immunosuppressants, but only oral steroids in reducing doses.

The second situation of the more chronic form of the idiopathic dilated cardiomyopathy, has in our opinion a more controversial role to immunosuppressive therapy, particularly in adults[5,6].

Our patient, was a male, 38 years old, Caucasian, coming from another hospital, reporting a picture 6 weeks before of mononucleosis like syndrome with enlargement of neck lynphonodes, malaise, and fever, that lasted for few days and improved with common analgesics. The antigenemia was positive for cytomegalovirus (CMV)(2-40,000 cells) with elevated titers of IGG and IGM. After one week, the patient referred dispnea on exercise, palpitations that got increasingly worse and he was hospitalized. The chest X-ray showed a diffuse infiltrate in both lung fields that was considered infectious. He was given ganciclovir, azitromicina, cefuroxime, and the condition didn't improve with increasing dispnea and the need of oxygen. A cardiologist was called and after the Echo a diagnosis of an acute CHF syndrome was made. The patient was referred to us at Hospital Israelita Albert Einstein - São Paulo, due to the acute deterioration of the hemodynamics, for an external cardiocirculatory assistance system, or eventual heart transplantation.

He arrived with a moderate to severe dispnea at rest, needing a non invasive ventilator assistance with FIO2=45% to keep the oxygen saturation above 94% with a breath rate of 32 BPM and heart rate of 130 BPM. The arterial pressure was 89x56 and MAP of 67mmHg, there was a gallop rhythm with rales in both lung fields. There was intense vasoconstriction with absence of pulses down to the popliteal arteries. The first X-ray done at our hospital, showed a pattern of a diffuse bilateral edema with atelectasia of the left lower lobe (Figure 1). We decided for a non invasive respiratory assistance, and intense chest physiotherapy treatment. A central venous catheter was inserted disclosing pressure of 14mmHg. 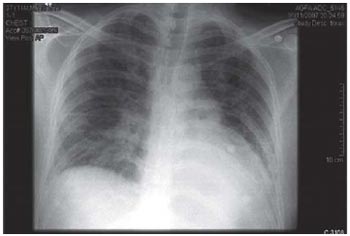 Fig. 1 - A significant pulmonary venous congestion, particularly in the peri-hilar region of both lung fields, and with a moderate enlargement of cardiac silhouette

We started the treatment with nitroprussiate, amrinone, low dose digitalis and increasing doses of captopril and carvedilol. The laboratory data showed a moderate leucocitosis of 14,000 cells, BNP of 1200 ng-ml, Ddimer of 1400mg-ml, PCR of 254mg-%, with normal renal function throughout the period. The tests for HIV-1 and HIV-2, HTLV and hepatitis B and C, were all negative. The first ECG showed sinus tachycardia, a vertical axis of QRS, and non specific STT alterations. The Echo demonstrated a poor contracting left and right ventricle with a calculated ejection fraction of 0.4 (Figure 2). A CT scan didn't disclose pulmonary thromboembolism. We kept in the therapeutics the ganciclovir and teicoplanin for suspected lung superinfection of s. aureus, to explain the X-ray and the white cell count. The biopsy showed moderate inflammation of the myocardium with edema and light mononuclear infiltrate. In Figures 3 and 4 we can also see moderate interstitial fibrosis.

Fig. 2 - A poor contracting LV, with an enlarged RV protruding in the outflow tract of the LV. The calculated EF of the LV was 40%. LPE=Left Pleural Effusion, PE= Pericardial Effusion 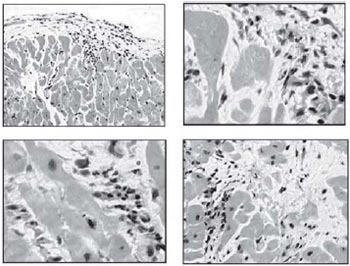 Fig. 4 - A pattern of increased interstitial collagen (light). The myocardial fibers are the darkest (T.Masson) 400x 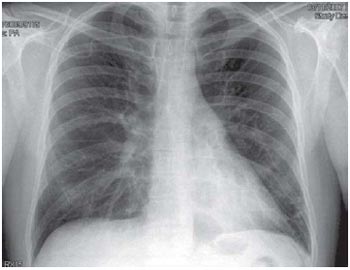 Fig. 5 - A normal pattern of lung field vasculature with a slight enlargement of the cardiac silhouette

Considering that the possible virus involved in the disease was being treated, and the presence of inflammation of the myocardium, as demonstrated by the biopsy specimens, and the very elevated PCR of 224 ng%, we decided for the pulsotherapy with methylprednisone with intravenous bolus of 1000mg on day one, 500mg on day two, and 250mg on days 3,4 and 5, with slow tapering of prednisone dose thereafter, from 20 to 5mg every other day when it was stopped 3 weeks later.

A striking improvement of the picture could be seen in the cardiovascular and lung functions. The Echo demonstrated a fast return to normal of the EF, and the X-ray at the end of the pulsotherapy, showing normal lung fields (Figure 5). The intravenous vasodilators were discontinued and the patient was dismissed from ICU, with captopril, carvedilol, low dose prednisone and ganciclovir, and from the hospital 8 days after the admission. The ganciclovir was kept for 21 days at home and he returned to work 3 weeks later. The Echo and gallium cintilography done 45 and 90 days after the dismissal from the hospital showed normal results, as well as BNP and PCR values.

There are two worth considering aspects in this communication. The first one, is the reaffirmation of the potential aggressiveness of the CMV disease in healthy people, through an initial picture of mononucleosis like syndrome[7-10]. This can occur in adults and children, and the available etiological treatment with several successful reports on the literature make imperative the search for this viral disease[11-13]. Also, mostly important, because CMV is involved in the most severe and fatal cases of myocarditis[14-17]. It is worth to remember that not many years ago a paper denied the possibility of CMV as an etiological agent for myocarditis[18].

The second point of interest is that, pulsotherapy with steroids, can be life saving in conditions of acute inflammatory process of the myocardium, like in severe cases of rheumatic carditis, and acute rejection after heart transplantation. This is a different scenario from the one of idiopathic dilated cardiomiopathy, where the eventual rescue with immunosupressors is a more debatable practice. We used the pulsotherapy also because we had confidence that we were dealing with a treatable infectious agent.

The acute form that we have described can precipitate a healthy person in a true cardiogenic shock, in a few days of evolution, and if not properly treated can be lethal or demand expensive procedures like cardiocirculatory assistance. The cost of this procedure and of its potential complications is quite important in a country like Brazil with many unresolved social problems. In this situation, when the biopsy demonstrates edema and mononuclear infiltration in a truly acute clinical picture with very elevated PCR levels, one can consider benefit of intravenous steroid pulsotherapy, particularly in a treatable viral myocarditis. Also, the indication of myocardial biopsy study should be considered crucial in the severe cases of myocarditis, to help in establishing the prognosis and aggressiveness of therapy. It is now well recognized good evolution, for example of the fulminant myocarditis compared to giant cell myocarditis[19,20].

This present case should be a warning against the fast hurry to cardiac circulatory assistance and heart transplantation, when, the necessary intensive immunosuppression could have, in face to the systemic viral disease, tragic consequences. We consider imperative the search for potential treatable forms of viral aggression of the myocardium, before invasive and costly procedures.

20. Hunt SA, Abraham WT, Chin MH, Feldman AM, Francis GS, Ganiats TG, et al: ACC-AHA 2005 Guideline Update for the Diagnosis and Management of Chronic Heart Failure in Adult: a report of the American College of Cardiology/American Heart Association Task Force on Practice Guidelines (Writing Committee to Update the 2001 Guidelines for the Evaluation and Management of Heart Failure): developed in collaboration with the American College of Chest Physicians and the International Society for Heart and Lung Transplantation: endorsed by the Heart Rhythm Society. Circulation. 2005;112(12):e154-235. [MedLine]