Introduction: The mediastinitis is a serious postoperative complication of cardiac surgery, with an incidence of 0.4 to 5% and mortality between 14 and 47%. Several models were proposed to assess risk of mediastinitis after cardiac surgery. However, most of these models do not evaluate the postoperative morbidity. Objective: This study aims to develop a score risk model to predict the risk of mediastinitis for patients undergoing coronary artery bypass grafting. Methods: The study sample included data from 2,809 adult patients undergoing coronary artery bypass grafting between January 1996 and December 2007 at Hospital São Lucas - PUCRS. Logistic regression was used to examine the relationship between risk factors and the development of mediastinitis. Data from 1,889 patients were used to develop the model and its performance was evaluated in the remaining data (n=920). The definitive model was created with the data analisys of 2,809 patients. Results: The rate of mediastinitis was 3.3%, with mortality of 26.6%. In the multivariate analysis, five variables remained independent predictors of the outcome: chronic obstructive pulmonary disease, obesity, surgical reintervention, blood transfusion and stable angina class IV or unstable. The area under the ROC curve was 0.72 (95% CI, 0.67-0.78) and P=0.61. Conclusion: The risk score was constructed for use in daily practice to calculate the rate of mediastinitis after coronary artery bypass grafting. The score includes routinely collected variables and is simple to use.

Performing the coronary artery bypass grafting (CABG) is a way to improve the patients quality of life affected by atherosclerotic disease. In the Unined States, approximately 450,000 CABG surgeries are performed each year, with a mortality of about 8%[2,3].

Despite technological development and improvement of health professionals, mediastinitis, which is a severe infection after cardiac surgery, still presents a major challenge since it determines a significant increase in morbidity and mortality rates, hospital costs and high impact on social life of patients who survive[2].

The prevalence of postoperative mediastinitis ranges from 0.4% to 5%, when most of them were between 1% and 2%, increasing with the presence of pre-existing diseases, especially in heart patients, or associated procedures[4,5]. However, the mortality of this serious complication is high, ranging from 14% to 47%. Furthermore, mediastinitis greatly increases hospital costs, nearly tripling those values, which occurs mainly due to high morbidity, prolonged hospitalization and need for surgical intervention in these patients[2.6 to 8].

A large number of clinical conditions has been identified as risk factors for mediastinitis, such as obesity, diabetes, vascular disease, smoking, chronic obstructive pulmonary disease (COPD), previous cardiac surgery, use of both prior mammary arteries, prolonged surgical procedure (more than five hours), surgical reintervention within four days after surgery, higher NYHA functional class, need for postoperative blood transfusion, stable or unstable angina. There is no consensus on the most important risk factors and if they are individually independent risk predictors for developing postoperative mediastinitis, since each institution can have their "own risk factors"[5,6].

Considering clinical symptoms, the infection is confirmed by radiological findings, such as x-rays, in which it is observed a widening of the mediastinum, and particularly in computed tomography, where fluids are identified in the mediastinum, sternal dehiscence or sternal erosion and pneumomediastinum. Treatment of mediastinitis requires a combination of surgical re-exploration and immediate empirical antibiotic therapy[4,9,10].

The measurement and monitoring of immediate outcomes after cardiac surgery are used to demonstrate the effectiveness of the procedure, and to know if such results are adjusted for quality programs[11]. However, it is known that surgical outcomes are strongly influenced by patient characteristics and risk factors occurred during the preoperative period. Over 100 studies of perioperative prognostic risk stratification were conducted. The best-known scores in the literature are: EuroSCORE, National Nosocomial Infections Surveillance (NNIS), Society of Thoracic Surgeons (STS), and Northern New England Cardiovascular Disease Study Groups (NNE). Few of these scores contemplate the postoperative morbidity[12].

We conducted a historical cohort observational study based on variables obtained from the postoperative ward's database of cardiac surgery at the Sao Lucas Hospital - PUCRS (Pontifical Catholic University of Rio Grande do Sul). We included 2.809 patients who underwent isolated or combined CABG with valve surgery, between January 1996 and December 2007. The isolated valve surgery and CABG with concomitant tricuspid and pulmonary valves were excluded from the analysis.

The mediastinitis diagnosis was made with the patient suffering from pain, heat, redness and when the wound of the operative sternum was filled with pus, as instability and fever. The imaging method used to confirm diagnosis was chest tomography. All patients diagnosis were confirmed at the moment of the surgery by the presence of deep infection in the mediastinum.

Continuous variables were described by average, standard deviation and compared by Student's t test. Categorical or continuous categorized variables were described by counts and percentages and compared by chi-square test. The database was randomly divided into two parts for the process of the building risk score: 2/3 of the data were used for modeling and 1/3 for validation.

The variables initial consideration followed a hierarchical model based on biological plausibility and external information (literature) about the relevance and strength of the associations of these potential risk factors with the outcome being studied (in-hospital mediastinitis).

Once these variables are listed, multiple logistic regression was used in process of backward selection, because it was the best method of adjusting the variables, keeping the model all variables with significance level P < 0.05. Then, a weighted risk score was built based on the magnitude of the coefficients in logistic equation. When transformed into odds ratios, the values were rounded up to compose the score.

An appropriate role model was observed in the validation process, and the databases (modeling and validation) were combined to obtain the final score. The variables were neither included nor excluded in this process, which simply resulted in obtaining more precise estimates of the coefficients previously calculated. The same performance statistics described above were also shown.

This study research project was submitted and approved by the PUCRS Research Ethics Committee.

The total sample (2809), 94(3.3%) patients had mediastinitis and among those patients who developed mediastinitis, 26.6% of them had died. The average age of the study population was 61± 10.1 years. Regarding gender, 66% were men. Combined valve replacement surgery was necessary in 7.6% of patients.

Multiple logistic regression of predictors was performed in 1889 non-consecutive patients (random choice) that constitute two thirds of the total sample. The predictors selection to build the score was made according to their statistical significance, which were: COPD, obesity, postoperative multiple blood transfusion, necessity for surgical reintervention, and class IV unstable angina (Table 1). 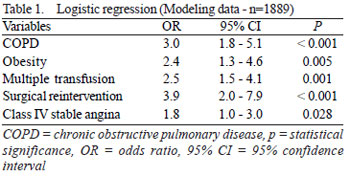 External validation was performed in 920 patients (one third of the total sample) randomly selected. The risk model accuracy was measured by area under the ROC curve of 0.73 (95% CI 0.68 to 0.80) and therefore, having reasonable discriminatory ability.

A final model was built from the score developed with data validation and data from 2/3 of the sample. Multiple logistic regression was used with the variables listed resulting in the risk score (Table 2). The associated factors with increased risk of mediastinitis were: surgical intervention, COPD, obesity, multiple transfusions and class IV unstable angina. The area under the ROC curve of the model was 0.72 (95% CI 0.67 to 0.78)(Figure 1). Table 3 shows the risk of mediastinitis according to the score and risk ranking (additive score). 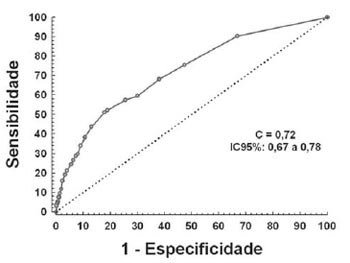 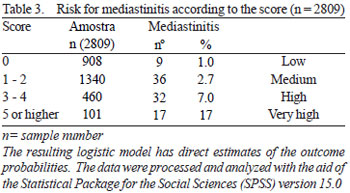 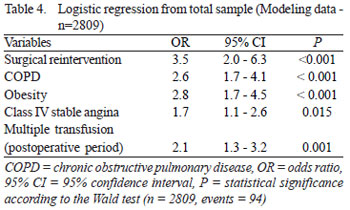 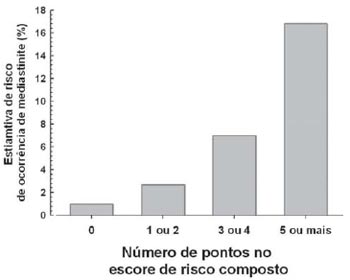 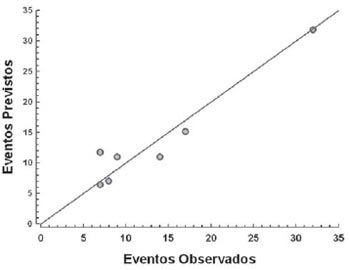 This study identified five predictors for mediastinitis after coronary artery bypass graft surgery. According to their scores, the predictors are: the presence of COPD, obesity, the need for multiple blood transfusions in the postoperative period, surgical intervention and class IV stable and unstable angina. A clinical practice instrument was developed from theses predictors to calculate the risk of mediastinitis in patients undergoing CABG. The score was developed from the choice of variables based on several previously published studies[2,4,6,13], as well as the experience in cardiac surgery and its postoperative period at the PUCRS Sao Lucas Hospital. This score, unlike other previously published scores[14,15], the presence of diabetes was not an independent risk predictor of mediastinitis. Tight glucose control and the use of continuous insulin may contribute to better outcomes of patients undergoing CABG at our institution.

The incidence of mediastinitis in this study was 3.3%, similar to that described by literature, ranging from 0.4% to 5%[1,9,13]. Many factors have been associated with the development of mediastinitis after cardiac surgery. However, there is no consensus in the literature about the most important factors and how each one is an independent risk predictor of postoperative mediastinitis.

Obesity was also an important risk predictor for mediastinitis, adding two points to the score, with OR 2.8, 95% CI 1.7 to 4.5. Eklund et al. also highlighted obesity as a major risk predictor in a study that included 10.713 patients undergoing cardiac surgery as an independent risk factor in the multivariate analysis OR 1.1, 95% CI 1.05 to 1.15. The incidence in patients with mediastinitis was almost three times higher in obese people than in others in this study. Likewise, in a French study, the incidence of mediastinitis was 5.6% in patients with BMI > 30 compared with 2.0% in those who had a lower BMI[18]. The real mechanism that leads obesity to this complication is poorly understood and probably multifactorial. It may be related to technical factors during surgery, such as difficulties with skin preparation, an increase in the transoperative period, increased bleeding and ineffective antibiotic prophylaxis, since such patients have a greater distribution volume and penetration of drugs in adipose tissue[9].

As well as obesity, COPD was also an important risk factor for mediastinitis, with OR 2.6 95% CI 1.7 to 4.1 in the logistic regression. This condition adds 2 points to the risk score. The risk estimatation proposed in the Guidelines of the ACC/AHA[19] also presents COPD as a risk factor, adding two points to its score. In the Gardlund's et al. retrospective study[20], COPD was an independent risk factor for mediastinitis (P < 0.001), as well as in a study that included 15.406 patients undergoing CABG, where 25.9% of COPD patients developed mediastinitis[13].

Patients with class IV stable and unstable agina constitute 38.5% of our sample, and 4.4% of patients developed mediastinitis, compared with 2.7% in those with angina class I, II or III. They contributed one point in the risk score, with OR 1.7, 95% CI (1.1-2.6). It has not been possible to identify relevant studies citing the presence of angina as a risk predictor for mediastinitis in patients undergoing cardiac surgery. The postoperative multiple transfusions were considered as an independent risk predictor for mediastinitis, adding one point to the score.

Another risk score for mediastinitis after CABG was developed in a hospital in Australia, and found an association between blood transfusion and increased incidence of infection, with OR 3.6, 95% CI 2.1 to 6.1, in the multivariate analysis. It may lead to an effect of immunosuppressive transfusion, which predisposes patients to infection[12]. This score does not provide perfect discrimination as other risk models for mediastinitis after cardiac surgery, and it is considered reasonable (area under ROC curve 0.72, 95% CI 0.67 to 0.78). The inclusion of new variables may increase the model accuracy. The population growth (n) makes the emergence of other variables possible, even those that were not significant in the multivariate analysis, as well as the variables validation in other institutions.

The identification of risk factors in patients with mediastinitis can lead to its modification, as reducing mortality and improving health and functional status. The socioeconomic impact of mediastinitis is a reason to evaluate and modify policies and hospital practices, which may be contributing to the development of infections.