Objective: To show the complications that increase the permanence at intensive care unit (ICU) of the patients submitted to cardiac surgery. Methods: Eighty-five handbooks of patients submitted to cardiac surgery had been analyzed, retrospectively, from March to May 2009 at Santa Casa de Misericórdia de Juiz de Fora (MG) - Brazil - and 14 (16.47%) patients had been studied. They remained more than 5 days at ICU. In 85 patients occurred three deaths: two patients operated in urgency character and this increases the morbidity; one patient who remained in mechanical ventilation (MV) by 21 days. Results: Complications that had increased the time of hospitalization at ICU had been respiratory and metabolic in accordance with literature. Conclusion: Complications that increase the time of permanence at ICU are those related to respiratory function, chronic obstructive pulmonary disease, tabagism, pulmonary congestion, time of permanence under MV, diabetes, infections, renal insufficiency, stroke and hemodynamic instability.

Patients undergoing cardiac surgery undergo a series of examinations and preoperative tests, so that there are no surprises and complications. The procedure has high morbidity and has complications related to the preoperative and cardiopulmonary bypass (CPB) used during the operation, requiring that patients undergoing these procedures are well prepared hemodynamically and psychologically for the postoperative[5-10].

The morbidity and mortality in the postoperative of cardiac surgeries is of great interest, prompting several protocols for postoperative management[1-4]. The ischemic asymptomatic episodes are very frequent and seem to imply a worse prognosis[11,12]. Thoracotomy is an intervention that will limit movements, and the position in bed leads to pain in varying degrees.

The patient undergoing cardiac surgery shall remain on mechanical ventilation (MV) in the immediate postoperative period until he covers total lucidity, in some cases for even longer, and should remain in bed for three to six weeks[3,12-14]. Because of hemodynamic instability that can happen in the immediate postoperative period, the patient may need inotropic support (VAD) and must remain in the Intensive Care Unit (ICU) while there is need[15-17]. The controls of vital data, such as capillary blood glycemia and monitoring are performed on an hourly basis, which can also bring discomfort to the patient[2,18-21].

Systemic diseases, especially respiratory and metabolic diseases such as chronic obstructive pulmonary disease (COPD) and diabetes, may increase the length of stay in ICU and in some cases, increase the duration of mechanical ventilation[3,9,18]. Patients with COPD present, if not well-conditioned and have not stopped smoking for at least four weeks before surgery, greater difficulty in oxygenation and, therefore, remain longer in the VM[22,23]. Diabetes is controlled with capillary blood glycemia hourly and regular insulin according to glycemia. There are cases where it is necessary to apply intravenous insulin therapy and the support of endocrinology in the ICU[24,25].

Diseases such as hypertension, autoimmune diseases, peripheral vascular disorders, metabolic syndrome (MS) and others need to be controlled and require greater care in the immediate postoperative period[26].

The aim of this paper is to describe the complications that increase length of stay in ICU in the immediate postoperative period of cardiac surgeries.

We evaluated medical records of 85 patients undergoing cardiac surgery at Santa Casa de Misericordia de Juiz de Fora - MG (SCMJF) in the surgical ICU during the period of March to May 2009.

The study was approved by the Ethics and Research Committee of Santa Casa de Misericordia de Juiz de Fora, with Protocol 0079/09.

We calculated the mean and standard deviation of length of stay and patients' age (Figures 1 and 2), to verify, descriptively, the behavior of the sample according to the period of hospitalization of patients. The inferential statistics were made with the program SPHINXS LEXICA V. 5.1., using the test: ANOVA one-way with a significance level of 5% to see if there was difference between the times of hospitalization in relation to surgical procedures and the comorbidities, respectively. 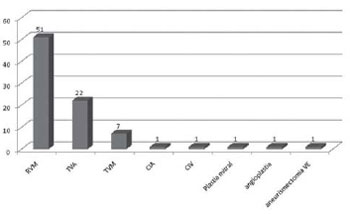 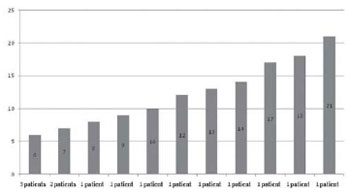 Fig. 2 - Length of Stay in ICU in the postoperative per patient 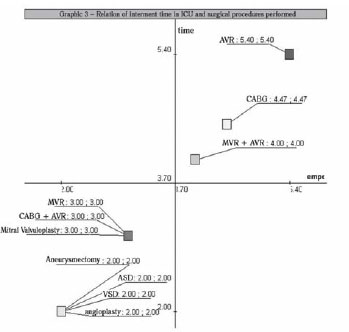 The results show that the average length of stay in ICU were not significantly different (F=0.41; 1-P = 7.61%) between them in according to the surgical procedures performed (P < 0.05), which highlights the fact that these do not determine significant variations in the length of stay (Figure 4). 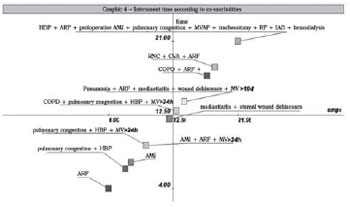 The results of this study show that the average length of stay in ICU were significantly different (F = 2,469.09; 1-P = > 99.99%) between them in relation to intercurrent comorbidities in the immediate postoperative period (P < 0.05), which highlights the fact that these determine significant variations in the length of stay.

The patient who remained hospitalized for 14 days was maintained on MV for 10 days due to respiratory failure and pneumonia after surgery and still mediastinitis with wound dehiscence; the patient who was hospitalized for 17 days, age 50, she presented severe COPD and went into acute respiratory failure (ARF) in the second postoperative day, having to remain on MV for more than 10 days, including being subjected to tracheostomy. The patient who was hospitalized for 18 days, age 72, showed decreased level of consciousness due to ischemic cerebral vascular accident (CVA) in the immediate postoperative and acute respiratory failure, staying in MV for 15 days, the patient who stayed 21 days hospital, aged 70 years, had peroperative instability, which required the use of intra-aortic balloon in the immediate postoperative period for more than 72 hours. He also presented perioperative AMI, pulmonary congestion, need for mechanical ventilation throughout the hospital stay, had pneumonia associated with mechanical ventilation (MVAP), evolving to tracheostomy, renal failure, requiring hemodialysis and died.

Among the 85 patients, there were also two (2.35%) deaths of patients in the PO, who underwent emergency surgery with ventricular failure before surgery. The internment time ranged from 1 to 3 days. Bianco et al.[16] refer to increased morbidity in emergency surgeries.

Surgical interventions are part of the current therapy for heart disease [5.27]. The most prevalent type of surgery is CABG, in this study performed in 54 patients, confirming the published literature, followed by valve replacement[6,18,27,28]. The valve repair has become the procedure of choice for treatment of mitral valve disease. Many published studies show that valvuloplasty is preferable to valve replacement[28,29].

One of the factors that may increase morbidity and mortality in the PO, especially in the elderly is the duration of CPB[16,18,30,31]. The prolonged CPB, in addition to systemic inflammation, predisposes to postoperative complications, especially respiratory[3,4,7,16,31-36] and the need to use the IAB reflects hemodynamic instability[2,3,16,30,31.37]. CABG surgery without CPB was initially performed in 1967 by Kolessov. While seemingly difficult to achieve, the arterial anastomosis with a beating heart may have greater benefits[3,4,32,36]. It was noticed, also, higher morbidity in patients undergoing emergency surgery in relation to elective surgery[7,16,27,37].

The complications of cardiac surgery may be related to pre-existing diseases such as previous pulmonary diseases, COPD, asthma, smoking[3,7,23,25], advanced age[7,16,18,23,30], poor nutritional status[38], obesity, diabetes[16,39], among others[25]. Among the most common complications we found atrial fibrillation and flutter, pulmonary congestion and stroke[7,15,22]. Jaeger et al.[24] showed that 14% of patients presented perioperative AMI. The factors influencing the onset of AMI include: reoperation, injury to the left coronary artery, female gender[29], preoperative unstable angina, a higher number of grafts and prolonged cardiopulmonary bypass time[16,24,31,32,37].

Thrombotic complications in CABG are presented as major causes of mortality. The perioperative myocardial infarction can cause not only enzyme elevations without clinical relevance, as well as low cardiac output, malignant tachyarrhythmias and death[4,36,37,40]. Other factors are diabetes mellitus and hypertension[9,24,25]. Mediastinitis is one of the most serious complications of median sternotomy. Contamination of the wound may be the main determinant. Mediastinitis is defined as an infection of deep tissues of the wound associated with osteomyelitis of the sternum, which can also involve the retrosternal space. The factors most related to mediastinitis are obesity, COPD and diabetes mellitus[25.41]. The incidence of mediastinitis in sternotomy is 5% and death caused by mediastinitis is around 15%[25.41].

Other factors of increased incidence of postoperative complications are associated with the natural process of aging associated with increased prevalence of chronic degenerative diseases. Due to increased life expectancy, the number of people over 70 years who require cardiac surgery has increased[7,25,30]. Cardiac surgery in the elderly is associated with high morbidity and mortality due to the high prevalence of comorbidities and lower functional reserve of these patients[4,30,37]. Low body mass index (BMI) may increase the frequency of postoperative complications in the elderly undergoing coronary artery bypass grafting[2,30,38,42].

Metabolic syndrome (MS) is an association of cardiovascular risk factors that is closely linked with increased insulin resistance. The patients with MS, an average of 10% among women and 84% among men, are at increased risk by up to four times to death from coronary artery disease and three more times to death of any kind. As SM is defined as increased blood pressure (> 130x85mmHg), fasting glycemia above 110mg/dl, triglycerides> 150, HDL cholesterol < 40 mg/dl and waist circumference > 102cm in men and > 88cm in women[26]. There was in this study, no patients with MS featured in evolution, but both obese and diabetic patients underwent surgery.

Obesity is directly related to the incidence of cardiovascular diseases[6]. Obesity provides a greater risk of decreased lung compliance[23], leads to the restriction on capacity and lung volumes that causes changes in gas exchange, increasing the chances of developing atelectasis and respiratory infections[6] while increasing the risk of mediastinitis[25].

According to Fernandes et al.[5], the length of hospital stay in cardiac surgery is on average around 6.6 days preoperatively with a mean of 5.4 ± 5.9 days in ICU. In this study, we chose to study those patients who stayed in ICU for more than five days. The pre-operative must be done well, with exams and guidance to patients, and this may require longer hospitalization[5]. The work of the respiratory therapy should begin preoperatively with the patient orientation on the work of breathing that should be done before and after surgery[3,6]. The patient that is well oriented in the preoperative treatment will better accept the treatment and the breathing exercises in physiotherapy and mechanical ventilation in the immediate postoperative period[6].

The complications that increase length of stay in ICU are mainly those related to respiratory function, COPD and smoking, pulmonary congestion, prolonged mechanical ventilation, infection, kidney failure, stroke and hemodynamic instability, such as hypertension, arrhythmias and acute myocardial infarction.