OBJECTIVE: To compare the radial artery and saphenous vein's patency in patients with recurrence of symptoms in a coronary artery bypass grafting (CABG). METHODS: Retrospective study. From January 1998 to December 2005, 469 CABGs were performed using the radial artery as a graft, in Vera Cruz Hospital in Belo Horizonte/ MG. Among the patients who underwent those surgeries, 94 presented ischemic changes in early or late postoperative period, which led them to be re-evaluated by coronary angiography. The grafts were divided in three groups: internal thoracic artery (ITA), radial artery (RA) and saphenous vein (SV), and they were stratified according to the severity of injury: uninjured or patent (< 70%), severe obstruction (70 to 99%) and occlusion. RESULTS: For the 94 patients in the study, 86 grafts of ITA, 94 of RA and 111 of SV were used. For the 86 ITA grafts, 73 (84.88%) were found patent. For the 94 RA grafts, 55 (58.51%) were found patent, and for the 111 SV grafts, 73 (65.76%) were uninjured. A statistically significant difference (P= 0.001) was found between RA and SV grafts, with a higher patency found for VS graft. For the RA grafts, women presented a worse result concerning the RA patency (65.7% and 40.7%), with P = 0.006. Concerning coronary revascularization, a statistically significant difference was found only for the grafts used for the right coronary, with a better result for the SV (P = 0.036). CONCLUSION: Radial artery (RA) presented worse results when compared to Saphenous vein (SV) as a second graft in a CABG, especially in women who were anastomosed in the right coronary artery.

The coronary artery bypass grafting (CABG) began in the late 60s[1]. One of the biggest advances in CABG was the use of the internal thoracic artery (ITA) anastomosed to the left anterior descending branch (AD) of the left coronary artery[2,3], proven in the 80s, as the gold standard in CABG because of its higher patency in the medium and long term compared to the saphenous vein (SV). Consequently, these studies have led surgeons to search for new arterial grafts[4], such as right internal thoracic artery, radial, gastroepiploic[5] and inferior epigastric[6].

The radial artery (RA) appeared as a good option, but there is still no proof of its superiority over the SV[7-11].

In our department, we had the impression of greater occlusion of the RA grafts, and this was the reason that motivated this study.

This study aimed to evaluate retrospectively the patency of the radial artery and the saphenous vein, based on coronary angiography in patients with recurrent symptoms or positive test for myocardial ischemia.

This study was approved by the Ethics and Research Committee of the Hospital Vera Cruz.

The dissection of the RA was made after completion of the Allen modified test preferentially in the non-dominant upper limb. The incision was made from the antecubital fossa to the wrist, exposing the brachioradialis fascia. The fascia was opened with electrocautery and with the aid of a self-static retractor; the brachioradialis muscle was separated from the radial flexor of the carpus, exposing the RA. The dissection of the RA branches was made with scissors and ligation with haemostatic clips, preserving the radial veins close to the graft. Their ends were ligated and divided. We proceeded with the proximal cannulation of the RA with catheter Jelco No. 22 and infusion with saline solution with heparin and other with papaverine under low pressure. Then it was soaked in papaverine solution which was maintained until their implantation. It was then performed synthesis by planes of the forearm and compressive bandaging.

The dissection of the SV was made in the usual way with ligation of its branches with an unabsorbed wire.

The dissection of the ITA has done in a pedicled manner and not skeletonized in all cases.

We analyzed the coronary angiographies of patients previously revascularized with the use of RA and recurrence of symptoms in our hospital during the period of 1998 to 2005. The group consisted of 94 restudied patients.

The indications for these studies were: angina pectoris, positive exercise test for ischemia, scintilography or stress echocardiogram suggesting myocardial ischemia.

Grafts were separated into three groups: ITA, SV and RA. At restudy the grafts were stratified depending on the severity of the lesions found in the postoperative period: without serious injury (<70%), severe obstruction (70% to 99%) and occlusion.

All results were subjected to statistical tests of hypotheses regarding each parameter studied with the use of SPSS 14.0 program. Continuous variables were analyzed by Student t test or nonparametric equivalent (Mann Whitney test), and the categorical variables by Chi-square and, when it was not possible we used the Fisher exact test and exact chi-square of Monte Carlo. For all analysis, the level of significance was 5% (P=0.05). 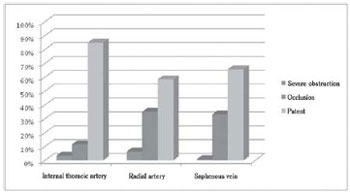 Fig. 1 - Analysis of the grafts restudied

Through the residue analysis, it was observed that there was no occlusion difference between the grafts of the radial artery and the saphenous vein, but there was a higher patency statistically significant (P=0.001) of the SV in relation to the RA. 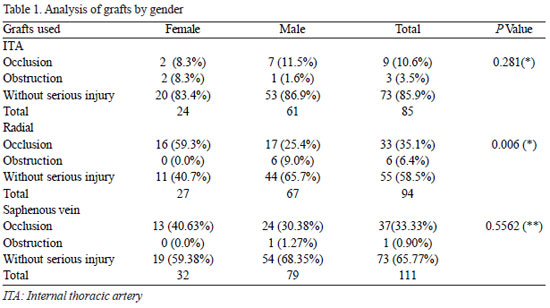 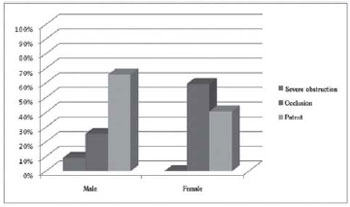 Fig. 2 - Analysis of the results of the radial artery by gender

In the comparison between RA and SV per revascularized coronary artery, there was statistically significant difference when anastomosed in the right coronary artery (RCA) with a higher patency of the SV (70.73%) compared to the RA (46.67%), with P=0.036 (Table 2, Figure 3). 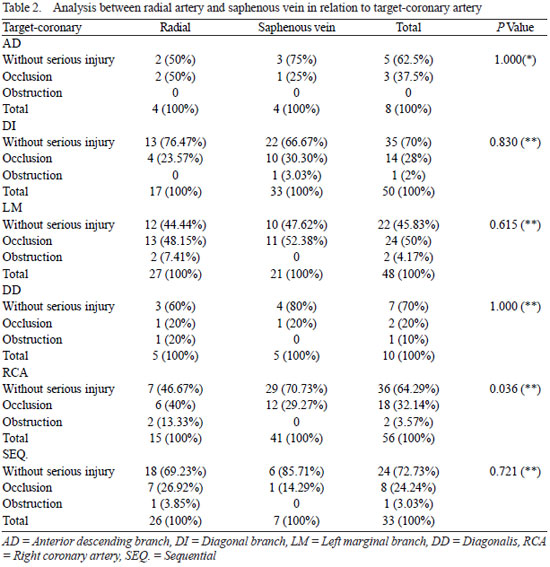 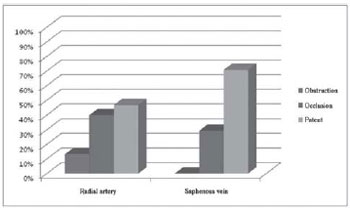 In the early 90s, after optimistic restudies of RA grafts used in the 70s by Carpentier, in addition to advances in technical dissection and pharmacological handling of vasospasm, there was renewed interest in the RA as graft in CABG[12,13].

Several observational studies indicated higher patency of the RA compared to the SV[10,11]. Borger et al.[7] demonstrated lower mortality or cardiovascular event in 5 years, in patients undergoing CABG with two arterial grafts compared to those receiving only ITA and SV grafts. In contrast, in 2004, Khot et al.[8] showed reduced graft patency of RA when compared to ITA and SV grafts. In 2006, Locali et al.[9] performed a meta-analysis that showed no statistical difference in graft patency of the RA compared with SV grafts. They point out that all the studies analyzed showed bias, therefore, not allowing a definitive conclusion.

Considering that our institution is private, there is no possibility of re-study of patients in a systematic way if no symptoms appear.

In our study we analyzed coronary angiographies of patients with recurrence of symptoms or positive test for myocardial ischemia, which reduces the cases of silent ischemia. For this reason, we observed lower patency in all grafts analyzed (ATI: 84.88%, RA: 58.55% and SV: 65.76%), compared to the patency of grafts in asymptomatic patients, in the literature. The same aspect was observed by Buxton et al.[14] and Achouh et al.[15].

There was no statistical difference in the occlusion of the RA and SV grafts, although there is a higher rate of RA grafts with severe obstruction. This may occur due to the RA being more prone to vasospasm.

There was statistical difference in the RA grafts when comparing the genders, with poorer graft patency in women. This same aspect was observed by Lawton et al.[16] and supposedly for the smallest size of RA in women.

Statistical difference was found between the grafts when anastomosed in the RCA and its branches with higher patency of the SV. In 2009, Hadinata et al.[17] compared RA and SV anastomosed on the RCA or its branches. There was no statistical difference, although there was a higher failure of RA grafts when the coronary artery lesion was less than 80%, which was not observed in SV grafts.

As the database of our study was the surgical description and the coronary angiography, there is a limitation in accurate characterization of patients. However, as the grafts analyzed were from the same patients, they were subjected to the same risk of comorbidities and distal bed.

Data from this study, including a high failure rate of RA grafts in women when anastomosed in the RCA is important in guiding the choice of the second graft in CABG.

The patency of RA as a second graft in CABG is safe, but it has worse results than SV grafts, especially in women and when anastomosed in the RCA.