Objective: To check changes in the functional capacity of patients undergoing coronary artery bypass grafting (CABG) by testing six-minute walk test (6MWT) following two years. Methods: A prospective cohort study where 215 patients were enrolled who underwent CABG, 13 did not meet the criteria for inclusion. 202 patients were evaluated preoperatively, 13 died during hospitalization and 6 in the follow up of two years. Four patients were considered lost follow up. This study followed 179 patients for two years classified into active and sedentary, according to physical activity in leisure time and to the 6MWT preoperatively and 2 years later. Results: One hundred and twenty patients were evaluated in the day before CABGS, being 67% male with an average age of 63 (±9.75) years. Before surgery and 2 years later, 52 were active and the 6MWT distances performed had been 359m (±164.47) and 439m (±171.34), respectively; P= 0.016. Forty five patients were classified as sedentary before and 2 years after surgery. The 6MWT distances walked before and after surgery had been 255m (±172.15) and 376m (±210.92), respectively; P< 0.001. Eighty two patients transited between these two groups, 71 passed from sedentary to active and had walked before and after surgery 289m (±157.15) and 380m (±125.44), respectively; P= 0.001. The 11 patients who were active and passed to the sedentary group walked 221m (±191.91) and 384m (±63.73), respectively; P= 0.007. Conclusion: The functional capacity of the patients submitted to CABGS had a significant improvement in a medium period of follow-up.

The coronary artery bypass grafting (CABG) has been proposed to minimize symptoms, improve cardiac function, survival and reduce the recurrence of major cardiac adverse events in selected subgroups of patients[1]. Studies have suggested that physical activity is beneficial in both the prevention and treatment of patients with ischemic heart disease, and it should be recommended for those undergoing CABG[2]. Therefore, the maintenance of physical activity in operated patients should be recommended. A controlled clinical trial evaluated the cardiopulmonary rehabilitation in CABG patients, which consisted of muscular exercises and ventilation, as well as preoperative education for at least 5 days and postoperatively until discharge. A sharp reduction in pulmonary complications, a significant difference in the incidence of cardiac arrhythmias, and an improved functional capacity measured on the seventh day after surgery through the six-minute walk test (6MWT) were observed[3].

In a controlled study described by Stein et al.[4], a group attended exercise-based cardiac rehabilitation, carried out bronchial hygiene, and used EPAP mask within seven days of hospitalization after CABG and another group received usual care only. At the time of hospital discharge, the patients in the rehabilitation group have walked a significantly greater distance in the 6MWT.

Physical capacity can be assessed by different methods. The cardiopulmonary exercise test is the gold standard. However, it has some limitations including a relatively high cost and reduced applicability in patients with physical deficits, and it does not reproduce the activities of daily living[5]. The 6MWT was well established to evaluate the functional capacity, especially in elderly patients with comorbidities[6]. The 6MWT is a valid instrument to assess the progression of functional capacity for exercise in different clinical interventions. It presents easy to use, and it is inexpensive. Even as a submaximal exercise test it can identify patients with poor prognosis and help in making the most appropriate therapeutic measures[7,8].

Therefore, our objective was to assess changes in the functional capacity of patients classified into active and sedentary who undergo CABG using the 6MWT after two years.

A prospective, multicenter, cohort study to evaluate 215 consecutive patients undergoing elective CABG was carried out. Of these patients, 13 did not meet the inclusion criteria.

The study included patients referred for elective CABG, in stable clinical condition at the time of preoperative evaluation performed by the responsible staff in each institution. The patients were considered fitted to take the 6MWT. The main reasons for exclusion were patients operated on an emergency basis with acute coronary syndrome and concomitant congenital heart disease or terminal illnesses, and patients with unstable angina and musculoskeletal impairment, which would make it impossible for them to take the 6MWT.

A structured questionnaire was applied and the information on demographic, anthropometric and clinical data was examined.

Patients were divided into two groups, according to leisure-time physical activity (LTPA): Group I - active patients who performed physical activities in their free time three or more times per week and for 30 minutes or more over the past two weeks before surgery and Group II - the sedentary patients.

In order to give more consistency to this classification, it was applied the Baecke Questionnaire of Habitual Physical Activity (BQHPA), which investigates the physical activity of the last 12 months[9]. The 6MWT was performed in the corridors of the hospital, in a level ground, with the distance previously marked. Patents were monitored for blood pressure (BP) and heart rate (HR) at rest and immediately after the test; the same was done as a pattern of the American Thoracic Society (ATS)[10].

Statistical analysis was performed using the software Statistical Package for Social Sciences (SPSS, version 15.0). Categorical variables were presented as absolute frequencies and percentages. Continuous variables were expressed as mean ± standard deviation when normally distributed. Demographic characteristics and comparison between groups of active and sedentary patients were analyzed by Student's t-test for continuous variables and the chi-square test for categorical variables. AP < 0.05 was considered statistically significant.

Of the 202 patients evaluated preoperatively, 13 died during hospitalization and six after two years. We were unable to contact four patients; they were considered lost-to-follow-up; 179 patients were tracked over a 2-year follow-up.

In Table 1 are shown the demographic, anthropometric, and clinical variables. The study group showed a majority of male patients, 120(67%). The mean age of the patients was 63 (± 9.75) years. Fifty-seven patients started physical activity two years after CABG. 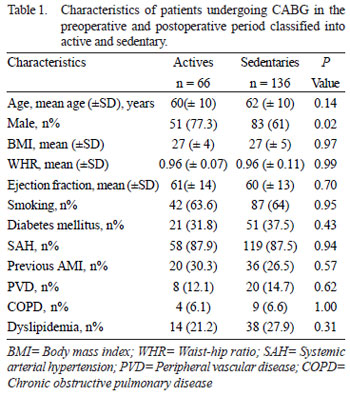 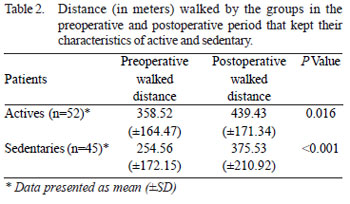 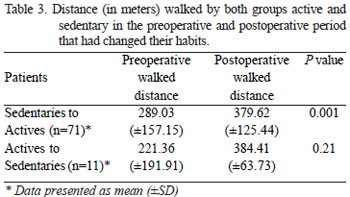 Our main finding shows that in a population of patients undergoing CABG, those who remained active in the period of two years and those who went from being sedentary to active improve their functional capacity.

Nery et al.[11] showed the importance of physical activity in the preoperative period in the outcome of CABG. The physically active patients had shorter hospital stays and fewer trans- and postoperative complications within a year. The cardiac surgery promoted a change in patients' lifestyle, increasing the number of physically active individuals in a 1-year follow-up.

Traditionally, exercise tolerance has been used as an indicator of overall physical capacity. It has also been demonstrated that exercise intolerance predicts a poor physical ability to perform tasks of daily living[12]. Besides, regular physical exercise produces a variety of beneficial effects on health, such as increased longevity, decreased mortality and incidence of metabolic disorders, among other comorbidity[13].

Kavanagh et al.[14] evaluated the influence of a change in both physical fitness and physical activity after a year of a walking-based cardiac rehabilitation program; the influence on cardiac mortality, and mortality from other causes. Patients were followed-up over nine years. The distance walked increased significantly during the training period, constituting an important predictor of cardiac mortality, in which each increase in every mile walked corresponded up to 20% reduction in mortality.

The effects of different interventions conducted only during the postoperative period of CABG were approached by some studies. Among them, Hirschhorn et al.[15] evaluated 93 patients who were randomized into three groups. Among the results, only the groups who were walking with or without breathing exercises, increased performance on the 6MWT distance at the time of discharge.

Herdy et al.[3], in a controlled clinical trial have evaluated the cardiopulmonary rehabilitation which consisted of muscular exercise and ventilation, as well as preoperative and postoperative education for at least 5 days until discharge. As a result, the authors could observe an expressive reduction in pulmonary complications, a significant difference in the incidence of cardiac arrhythmias, and an improved functional capacity measured on the seventh day after surgery using the 6MWT.

Physically active postoperatively patients improved their walking distance and functional capacity. Patients who stopped their physical activities showed no change. As a suggestion to the patients after CABG, in cardiac rehabilitation phase II, we consider important to recommend sessions of walking as part of a healthy lifestyle.