OBJECTIVES: Analyze the octogenarians patients submitted to the surgical myocardium revascularization (CABG) with and without extracorporeal comparing the clinical outcomes and its survival curves. METHODS: Observational study of the cohort type involving 396 octogenarians submitted to the CABG between 01/01/ 2000 and 01/01/2007. Elaboration of an itinerary for collection of data of the handbooks containing 36 variables. Comparison between groups using t test for independent samples, chisquare and survival curves using Kaplan Meier. RESULTS: We analyzed 290 patients that possessed appropriate information. The first group G1, of the patients operated without extracorporeal, was constituted of 111 patients and the second group G2, of the operated ones with extracorporeal was constituted of 179 patients. The univariate analyzes had presented statistics significance for the variables: cardiac insufficiency functional class preoperative (P=0.000), tobacco smoking (P=0.050), number of performed grafts (P=0.050), graft type (P=0,000), associates procedures (P=0.000), preoperative use of intra-aortic balloon (P=0.000), hospital mortality (P=0.000) and type of death (P=0.020). In the postoperative outcomes stroke (P=0,036), re-internment for angina (P=0,038). The analyze of the survival curves presented statistic difference (P=0,009). CONCLUSIONS: Hospital mortality and stroke were bigger in the G2 In the long time the patients of the G1 had respectively presented greater number of re-internments for angina and the late mortality was larger in G2 for the largest prevalence of cardiac deaths.

Despite the use of cardiopulmonary bypass (CPB) being considered the gold standard in coronary artery bypass grafting (CABG) for decades, there is a growing enthusiasm for CABG without CPB.

Comparative studies using these two methods showed that both present similar results regarding the improved quality of life[1-4] and the patency of the graft[2,3,5], while several studies have shown some advantages without the use of CPB as lower risk of stroke (CVA), decreased incidence of atrial fibrillation and surgical wound infections[6].

Regarding the possibility of incomplete CABG due to smaller number of grafts per patient, performed without cardiopulmonary bypass[6], Magee et al.[7] showed that this difference relates more to the choice of patients requiring fewer grafts for surgery without CPB.

The primary objective of the study was the comparative analysis of the clinical outcomes of short, medium and long term following the CABG, with and without the use of CPB in octogenarian patients and its influence on morbidity and mortality. Secondly, comparing the survival curves of different samples of study.

This is an observational study of non-concurrent cohort type involving octogenarian patients who underwent CABG at the InCor-FMUSP, in the period of 01/01/2000 to 01/01/2007. During this period, there were 27,863 cardiac surgeries, of which 8,765 were related to the treatment of coronary artery disease, being that of this amount, 396 patients were 80 years or more. The research was conducted by examining the medical records of patients, and due to lack of data, incomplete or inconsistent notes, we dropped 106 cases, leaving the sample with only 290 patients. Still, in some cases, there was insufficient data to prove whether or not the variable existed, being necessary to calculate the percentage applied to such situations. Statistical analysis comparing the two groups was performed using the t test for independent samples with significance level of five percent (P < 0.050) and the analysis of survival curves by the Kaplan-Meier method. The project was supported by FAPESP and was previously approved by the Ethics Committee of the Institution.

Patients were stratified into two groups, respectively operated with CPB (G1) and without CPB (G2)(Table 1). G1 patients were revascularized using mild hypothermia and myocardial protection with anterograde blood cardioplegia, and in the G2 group, the operation was performed with the aid of a stabilizer, with the number of grafts per patient equivalent (2.31 ± 0.81 and 2.51 ± 0.90, respectively, P=0.058). 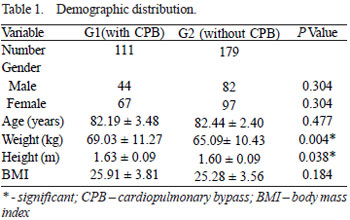 In relation to the preoperative clinical condition (Table 2), the groups were mainly about the presence of heart failure functional class III/IV in the CPB group (18.4% versus 35.9%, P=0.005) showing tendency to indicate this method in cases with poor ventricular function, regarding the presence of previous acute myocardial infarction (AMI), the proportion was similar in both groups (29.6% versus 40.1%, P=0.074) and also without statistical significance, of patients with AMI less than 6 months of operation. 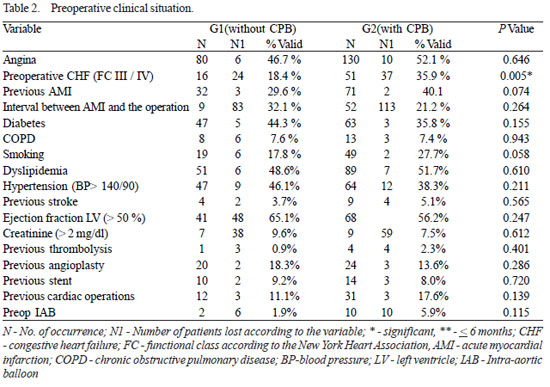 In the period of mediate postoperative (hospital), we had similar incidence and non significant of respiratory care for more than 24 hours of AMI, the onset of renal impairment (serum creatinine exceeding 2mg/dl). The same occurred when analyzing the need for reoperation and the appearance of surgical site infection, in contrast, by studying the presence of stroke after the CABG, we noted a higher incidence in patients who underwent the use of CPB (P=0.036).

It was noticed the fact that although both groups had valid percentage of patients who did not require support with similar vasoactive drugs, the same did not occur in relation to the need for hemodynamic support with the use of intra-aortic balloon (IAB), since the G2 group showed a higher frequency in the IAB at the end of the operation and during the immediate postoperative period (19.2% versus 2.9%, P=0.000).

The readmissions were for angina, cardiac arrhythmia, CHF and stroke, which were statistically similar, except when the subject was angina, which was more prevalent in the off-pump group, with statistical significance (P=0.038). Also significant was the highest number of deaths, both hospital and later among patients of G2 (P=0.000), deaths from cardiac causes were also prevalent in the group with CPB (Table 4). 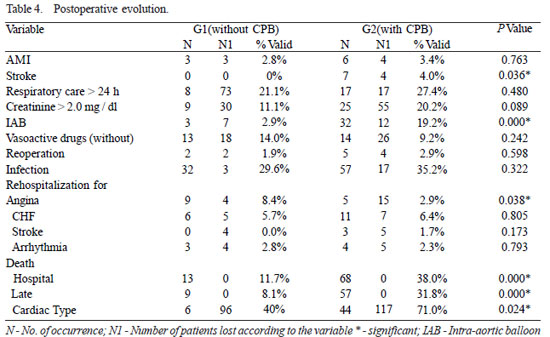 Sedrakyan et al.[4] argue that the CABG performed without CPB reduces the incidence of stroke compared with conventional CABG, which is consistent with our study because we also observed a smaller percentage of stroke in patients operated without the use of CPB (4% versus 0; P=0.036). The fact that G1 patients had higher incidence of stroke in the immediate postoperative period may lead to greater impairment of brain functions and have an impact on the quality of life reported by patients. This observation is consistent with those made by Motallebzadeh et al.[1] and Jensen et al.[3], whereby the qualities of life are better in both groups, without distinction between them.

Unlike Al-Ruzzeh et al.[5] which ensure that patients undergoing CABG have shorter hospital stays than those who did not use CPB, our data showed no statistical difference, with length of stay of 16.90 ± 2.30 days in the off-pump group and 19.36 ± 2.40 days in patients operated without CPB, perhaps because our sample consists only of octogenarian patients.

Regarding the statements made by Pereira et al.[8], that in randomized studies the doctor works as an important predictor of outcomes, we can say that, although our study is of cohort, in our study; outcomes like myocardial infarction, renal dysfunction and postoperative infection were not altered by the medical professional and did not reach clinical differences and statistical significance.

We agree with Romeo-Corral et al.[9] to argue that the body mass index does not have decisive power to predict the clinical outcomes between the groups studied. In our series, we found no clinical and statistical difference between groups (25.28 ± 3.81 versus 25.28 ± 3.56, P=0.184), although several outcomes have shown clinical differences and statistical significance, especially stroke in the immediate postoperative period (P=0.036) and hospital mortality (P=0.000). It is worth noting that the G1 group had higher mean body weight (69.03 ± 11.27 versus 65.09 ± 10.43, P=0.004) and even then it was the one that exhibited a lower rate of hospital mortality.

In our observation, only 14% of G1 patients and 9% of G2 had need of vasoactive drugs in the immediate postoperative period (P=0.242), which is consistent with Tatoulis et al.[10] when they stated that both groups need little support of vasoactive drugs.

Based on our samples, we can state that, in elderly patients, if clinical conditions permit, it is best to avoid the use of CPB and, thus, reduce the mortality rate nearly four times (relative risk RR = 3.25; HF 95 % = 1.89 to 5.60). The use of CPB in CABG in the elderly results in higher hospital mortality and a higher prevalence of stroke in the immediate postoperative period. Regarding the results of medium and long term, we found higher rates of re-hospitalization for recurrent angina in the group of elderly patients operated without CPB. In late mortality, the rate was higher in the group operated with CPB, being the predominant cardiac death.