Although OPCAB has been widely performed in recent years, few data are available about the way women behave in each type of surgery (off-pump versus on-pump). Studies suggest that female gender is an independent risk factor for higher rates of mortality and morbidity after CABG, but long-term survival and functional recovery are similar to those in men who underwent CABG[2-4].

Other studies have suggested that, on average, women have a clinical preoperative disadvantage that can influence, by far, this difference found. These findings are not universal, taking into consideration that there are significant differences in clinical practice compared to different institutions[5].

It is essential that short- and long term safety, benefits and efficacy of OPCAB are assessed (as seen in other studies[6]), so that we can, indeed, know whether this new approach to surgical treatment of arterial disease coronary artery is higher or at least not inferior to the technique that is already established as the gold standard (on-pump CABG) in the world literature, in female patients.

Retrospective review was performed from the database of medical and surgical records from the previously mentioned centers and, initially, two groups were created: on-pump CABG (392 patients) and OPCAB (549 patients).

From then on, in a comparable manner, the following variables were assessed:

After data collection, the variables studied were stored in 6.0 EPI.INFO software for statistical analysis. Student's t test was used only in comparisons of mean age and number of vessels treated (quantitative variables). For all other variables (qualitative) it was used chi-square test. Results were considered statistically significant when P value was less than 0.05.

This study was approved by the Research Ethics Committee of the Hospital Complex of the University Hospital Oswaldo Cruz/Cardiac Emergency of Pernambuco - HUOC/PROCAPE, No. 115/2009. 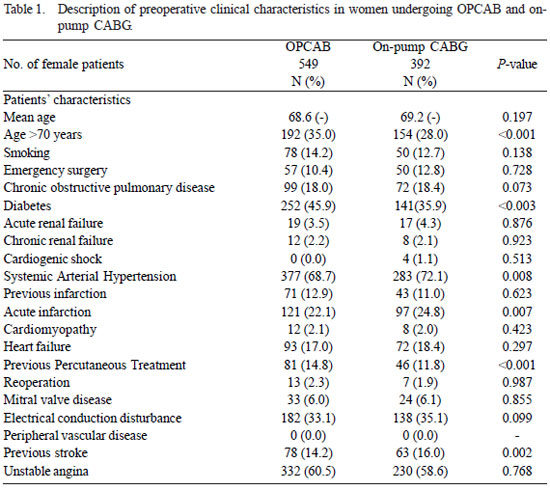 Patients undergoing OPCAB had a mean age of 68.6 years and those undergoing on-pump CABG had a mean age of 69.2 years (P=0.197). Thirty-five percent of the OPCAB group were aged > 70 years versus 28.0% with on-pump CABG (P<0.001). The on-pump CABG group was more likely to produce hypertension (P=0.008), acute myocardial infarction (P=0.007) and previous stroke (P=0.002). In OPCAB group, there were more patients with diabetes (P<0.003) and higher percentage of women who have undergone previous percutaneous coronary treatment (P<0.001). The other variables showed no statistically significant differences between groups.

Characteristic of the procedure (Table 2)

There was no statistically significant difference compared to the total number of vessels treated (mean 2.1 vs. 2.4, P=0.089). The vast majority of both groups received mammary and saphenous vein graft. On average, women undergoing OPCAB received more single graft of the left mammary (4.9% vs. 2.4%, P<0.001). 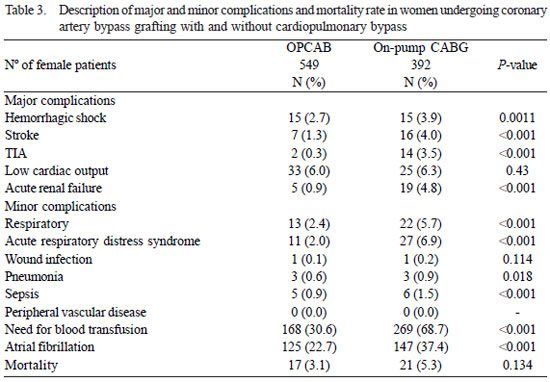 The mortality rate was lower in OPCAB when compared to on-pump CABG group (3.1% vs. 5.3%), however, this difference was not statistically significant (P=0.134).

It is unclear whether the female gender is an independent predictor of risk for adverse complications in coronary artery bypass surgery or if there are other variables occurring more often in women, which increase the risk. The Bypass Angioplasty Revascularization Investigation (BARI) showed that, after adjusting of risk factors in women, females showed an independent predictor of survival at 5 years[7]. Other possible reasons include the fact that women have a higher incidence of diabetes, which leads to increased postoperative complications, especially in the insulin-dependent group[8]. Late presentation in a state of emergency and/or emergency is also a variable that occurs more often in women, which leads to higher rates of complications.[9] It has been demonstrated a higher incidence of left ventricular hypertrophy and hypertensive heart disease in women, which has been proposed as causes of major complications[5].

In an attempt to reduce morbidity and mortality for conventional CABG, the OPCAB procedure was reintroduced in the 80s and widespread throughout the world in 90s. The elimination of cardiopulmonary bypass and systemic inflammatory response associated with this, it was expected that early adverse outcomes could be reduced without compromising outcomes in the long term. Retrospective analysis of databases have shown statistically significant benefit in operative mortality with the use of OPCAB[10,11]. However, all these tests are subject to selection biases that can not be accounted for in retrospective series.

On-pump CABG activates the complement and fibrinolytic cascade, contributing to postoperative bleeding[12]. In our study, we observed lower rates of hemorrhagic shock and also decrease in the need for blood transfusions in the OPCAB group compared to on-pump CABG group. This removal of blood transfusion reduces the risk of infections[13]. In our study, women undergoing OPCAB had less pneumonia and sepsis compared to patients undergoing on-pump CABG, however, we can not say that this decrease was necessarily due to decrease in blood product transfusions, since we have not performed that analysis.

Studies have suggested higher rates of stroke in patients undergoing on-pump CABG when compared to those undergoing OPCAB[14]. CPB can potentially contribute to neurological injury by loss of autoregulation of cerebral flow at low temperatures or by low perfusion pressure, micro and macroemboli, and alteration of the blood-brain barrier by the systemic inflammatory response, resulting in cerebral edema[15]. Randomized studies[16,17] on on-pump CABG versus off-pump CABG in multivessel disease patients clearly demonstrate significant radiological and biochemical evidence of greater brain injury, as well as greater numbers of cerebral emboli detectable[18] in patients undergoing on-pump CABG. This information is consistent with our findings, in which women undergoing OPCAB had significantly reduced rates of stroke and TIA postoperatively compared to those undergoing on-pump CABG.

The BHACAS-1 study (Beating Heart versus Cardioplegic Arrest Studies)[21] as well as other non-randomized prospective study[22] showed significant reduction in glomerular function (using the creatinine clearance) and tubular function (through fractional excretion of sodium and free water clearance) when comparing the use of off-pump CABG with OPCAB. The etiology of renal dysfunction after cardiac surgery is multifactorial[23] and in patients with multiple comorbidities that are associated with postoperative renal dysfunction (elderly, diabetics, previous renal failure), the CPB is associated with increased risk of developing renal failure requiring dialysis[24]. In our series, women undergoing OPCAB had a significant reduction of acute renal failure requiring dialysis postoperatively compared to those undergoing on-pump CABG.

In studies BHACAS 1 and 2[21], it was found that on-pump CABG was associated with a higher rate of postoperative arrhythmias compared with OPCAB. Another study[25] showed that the CPB associated with cardioplegic arrest was an independent predictor of atrial fibrillation postoperatively. Again, our findings agree with these studies, with an incidence of atrial fibrillation in the postoperative of OPCAB significantly lower than the group that underwent on-pump CABG.

The mortality rate was lower in OPCAB compared to on-pump CABG group (3.1% versus 5.3%, 17 and 21 patients respectively), however, this difference was not statistically significant. Although this difference may seem low, if we translate these data in terms of relative risk, the OPCAB showed decrease of 41.5% in mortality when compared to on-pump CABG. One should take into account the fact that in the OPCAB group there was a higher percentage of diabetic women (P<0.003) and that, despite the difference in average age in the groups was not statistically significant, this group showed a higher percentage of women with over 70 years (P<0.001).

Recently, Shroyer et al.[26] published controversial study (ROOBY Trial) about the subject OPCAB versus on-pump CABG. The study started in 2002 and completed in 2008, randomizing 1099 patients to on-pump CABG group and 1104 patients to the OPCAB group (all elective surgery, no emergency). In the short-term analysis, the study's primary outcome included a composite of death or postoperative complications, for example, reoperation, new mechanical support or cardiac arrest within the first 30 days postoperatively.

The researchers did not observe any differences in outcomes between groups On-pump CABG and OPCAB. However, we should emphasize several factors that limit the conclusions of this study: it was not double-blind, low average number of procedures performed by surgeon, more than half of surgeries performed by residents, 99% men; analysis of patency with catheterization only in the postoperative period, without confirmation of patency of the grafts equivalent between groups in intraoperative period at the end of the procedure (which leaves the results at the mercy of possible technical failures at the time of closure of the chest). Such a study should be read and interpreted carefully to avoid harming the use of OPCAB - surgical procedure already established and that has demonstrated many benefits to patients.

There are some important limitations in this study that require caution in interpretation: 1) The data presented herein are not adjusted for specific risk attributed to clinical characteristics, and it is possible that the choice of surgical procedure is based on these clinical differences, a fact that is not captured by the analysis of the database; 2) The groups are not matched with respect to preoperative clinical characteristics, which compromises in some degree the findings; 3) An intention to treat can not be identified because the database only identifies the use or not use of CPB, so that conversions from OPCAB to on-pump CABG intraoperatively can not be analyzed, a fact that may bias the adverse outcomes in on-pump CABG, 4) the study population was assessed retrospectively. In order to these limitations are overcome, we need more prospective randomized studies.

The OPCAB in women decreased the rate of complications compared with on-pump CABG. Although we found lower mortality rate in the group without CPB, this study was not powered to demonstrate robustly that difference.