INTRODUCTION: The present report describes the technique for "inverted L" upper ministernotomy with central canulation for the treatment of simple congenital cardiopathies and presents the initial results. METHODS: Ten patients (mean age: 7 ± 4.2 years; mean weight 29.1 ± 13.5 kg) were operated on between January 2006 and July 2007. RESULTS: All defects were corrected. No death was observed and no complication that required reintervention occurred. CONCLUSION: The described technique showed to be feasible and safe for the correction of certain congenital cardiopathies, with less surgical trauma, besides the aesthetic benefit and an expectation of diminished thoracic deformity in the future.

The upper mini-sternotomy technique is commonly used in adults as an access route for the treatment of various diseases, especially heart valve. Other access routes are described in the minimally invasive treatment of congenital heart diseases, such as right lateral minithoracotomy[1], transxifoide approach[2] and lower mini-sternotomy[3]. However, the details of the cannulation performed in each of these approaches and is never performed, but merely the authors report only on the central or peripheral cannulation.

The aim of this study is to describe the technique of "inverted L" upper mini-sternotomy with the tactics of central cannulation, which varies according to the defect to be corrected for congenital heart disease.

Patients over 18kg, with simple cardiac diseases were selected to perform the first 10 cases of correction of congenital heart diseases by "L" upper ministernotomy with central cannulation during the period of January 2006 to July 2007 at Hospital Pró-Cardíaco. Patient's characteristics, procedures performed and initial results were collected from medical records. The mean age was 7 ± 4.2 years and mean weight of 29.1 ± 13.5kg. The surgeries performed were: five closures of IAC, three closures of IVC, one aortic valve replacement and resection of a subaortic membrane. Three surgeries had combined procedures (Table 1).

We performed an incision in the skin of 4cm (1cm above the angle of Louis and 3cm below). The sternum was opened longitudinally in "L", using a surgical saw with straight blade. Thus, all the manubrium was opened and the sternum was divided in "L" up to the level of the 4th left intercostal space. After opening the sternum, the thymus was resected.

The arterial cannula was installed in the ascending aorta. The venous cannulation varied with the defect to be corrected. In cases of surgery in which the right atrium needed not to be opened, cannulation was performed with a single triple-stage cannula, installed via the superior vena cava into the inferior vena cava (Figure 1). 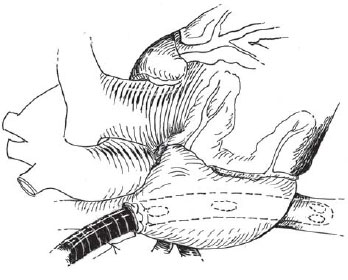 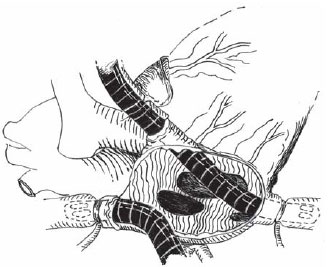 CPB was normothermic with crystalloid perfusate and anterograde hypothermic blood cardioplegia every 20 minutes. Patients weighing over 40 kg were received venous drainage. In all patients CO2 was used in the field to facilitate the removal of air cavities at the end of CPB.

In all patients it was possible to obtain the total correction of their heart diseases using CPB. The mean CPB time was 36 ± 20 min.

The patient who had undergone aortic valve replacement was directly approached by the ascending aorta. The patient who had undergone ventriculoseptoplasty and resection of subaortic membrane was approached by the pulmonary artery trunk and the ascending aorta. The other patients had the right transatrial approach in the correction of their heart diseases.

Minimally invasive cardiac surgery in adults has gained popularity in recent years and the application of these approaches and tactics in the pediatric population occurred with some restraint. The safety and feasibility of upper ministernotomy have been demonstrated[4,5], and despite increased surgical time, there is no increase in complications[6]. In our country, Rocha e Silva et al.[5] demonstrated the safety of upper ministernotomy to surgically correct the IAC of 20 children and Sampaio et al.[7] reported the aesthetic benefit without deleterious effects in adults also operated to correct the IAC.

The minimally invasive approach should allow the surgeon adequate exposure to the structures to be repaired, safe installation of cardiopulmonary bypass, effective removal of air from the open cavities and control of bleeding sites. However, the descriptions of the various approaches previously published did not include details of the tactic of cannulation, the aim of our study.

This study proposes that the three different surgical tactics exposed are chosen according to the defect to be repaired so as to enable adequate visualization of the structures in question, while allowing ready access to the sites of the purses and their sutures in the case of bleeding. The latter appears to be of paramount importance in the restricted environment such as the mini-incisions. Often, the greatest constraint to cannulation of the inferior vena cava is a right atrium enlarged, besides the risk of bleeding with difficult access at the time of decannulation.

The drainage of the mediastinum should be performed also with the patient still under CPB, therefore, as the outlet site of the drain remains in the subxiphoid region, the uncompressed cavities facilitate the passage of forceps and drain underneath the body below the mediastinum that is intact. With respect to the difficulty of maneuvers to remove air from the cavities, we used the CO2 bath in the operative field, which displaces the environmental air and replaces it by this gas that is more diffusible in the blood, reducing the risk of gas embolism[8].

The technique of cannulation indicated to the type of congenital heart defect to be repaired has shown to be safe and effective in approaches through upper mini-sternotomy, for its comfort and practicability, without compromising the surgical field.