INTRODUCTION AND AIMS: The long-term results after surgical repair of rheumatic mitral valve remain controversial in literature. Our aim was to determine the predictive factors which impact the long-term results after isolated rheumatic mitral valve repair and to evaluate the effect of those factors on reoperation and late mortality.
METHODS: One hundred and four patients with rheumatic valve disease who had undergone mitral valve repair with or without tricuspid valve annuloplasty were included. All patients with associated procedures were excluded. The predictive variables for reoperation were assessed with Cox regression and Kaplan Meier survival curves.
RESULTS: The mean follow-up time was 63 ± 39 months (CI 95% 36 to 74 months). The functional class III and IV was observed in 65.4% of all patients. The posterior ring annuloplasty was performed in 33 cases, comissutoromy in 21 cases, and comissurotomy with posterior ring annuloplasty in 50 patients. There was no operative mortality. The late mortality was 2.8% (three patients). The late reoperation was associated with residual mitral valve regurgitation after surgery (P<0.001), pulmonary hypertension at the pre-operative time (P<0.001), age (P<0.04) and functional class at the post-operative time (P<0.001). We observed freedom from reoperation rates at 5 and 10 years of 91.2 ± 3.4% and 71.1 ± 9.2%, respectively.
CONCLUSION: Repair of mitral valve in rheumatic valve disease is feasible with good long-term outcomes. Preoperative pulmonary hypertension, residual mitral valve regurgitation after surgery, age and functional class are predictors of late reoperation.

The aim of this study was to assess factors associated with reoperation and mortality in patients undergoing only conservative procedures in rheumatic mitral valve cause. We aim also to assess the effectiveness of this procedure in this population.

After approval by the Research Ethics Committee and registration at National Commission on Ethics in Research (CONEP), we performed a cohort study in patients undergone surgery between January 1994 and December 2005, when there were 700 heart valve surgeries.

During this period, patients underwent surgery by five different surgeons at a single institution. The intraoperative echocardiogram was not performed in all cases.

The demographics of patients, pre- and postoperative echocardiographic assessments, functional class, according to the New York Heart Association (NYHA), and mortality were obtained retrospectively. Follow-up was considered as the last visit at the institution.

Continuous variables were expressed as mean with standard deviation. The discrete variables were described by percentage. We used the Kolmogorov-Smirnov test for the detection of a normal sample, and then used the Student's t test or Wilcoxon test for paired samples when appropriate. Survival and reoperation were assessed by Kaplan-Meier and proportional hazards regression using the Cox stepwise method. We used the software Medcalc 4.0 (Brussels, Belgium). The P value of <0.05 was considered significant.

We observed that there was reduction of left atrial size and ejection fraction and functional class improvement, all these parameters was statistically significant.

33 plasties were performed using ring, 21 commissurotomies and 50 commissurotomy and mitral ring. There was no operative mortality. The tricuspid valvuloplasty was performed concomitantly in 12 patients, all with the use of flexible ring (Braile Biomedica ®), according to the technique previously described [4]. There were no deaths until hospital discharge. 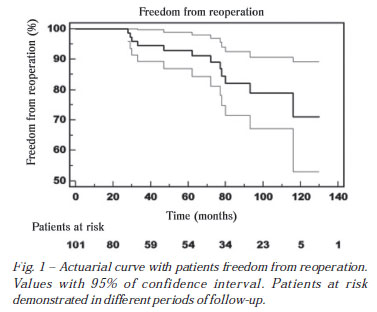 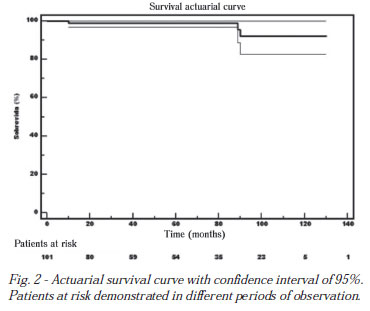 In regression analysis with the Cox proportional hazards using the stepwise method, were found as independent predictors of reoperation the variables listed in Table 2, with respective odds ratio (OR). In this analysis, we used the clinical and echocardiographic variables.

The mitral valve repair is the procedure of choice in patients with mitral regurgitation caused by degenerative disease, where the techniques employed have lower rates of morbidity and mortality and good long-term survival, with most of the patients free of reoperation and/or thromboembolic complications [5]. However, the application of these techniques in rheumatic valve disease, even when feasible by valve morphology, is still controversial in the literature, with controversial results [3,4,6,7].

One of the limiting factors for the repair in rheumatic disease is the evolutionary character of valve degeneration. Duran et al. [5], dividing patients undergoing mitral valve repair by age, observed a greater chance of valve repair in patients younger than 20 years, compared with patients between 21-40 and above 40 years. However, those under the age of 20 years had a higher risk of reoperation when compared to patients with more than 20 years of age. This result was also described in Brazilian study, performed by Pomerantzeff et al. [8], where the cutoff age was 16 years. Another related factor was the moment of surgical indication. The earlier the surgery, the lower the commitment of the valve or subvalvular apparatus, less distortion of ventricular geometry and, consequently, the greater the chances of successful functional repair, and preservation of ventricular function. We obtained an independent predictor of patient age at surgery, ie, the older the patient, increases his chance of reoperation, which makes sense because these patients have their subvalvar already well lesioned, the functional outcome of plasty can be compromised.

Another decisive factor in the choice between repair or valve replacement are the results of the use of prostheses. Yau et al. [10], in a comparative study of repair, metal prostheses and bioprostheses, identified the repair as independent risk factor for longer survival for cardiac death, despite the lower survival free of reoperation for valve repair compared to the use of metallic prostheses. Reoperation was not a risk factor for mortality.

In this study, the mortality rate was zero. One of the factors contributing to this mortality was the fact we have not included plasties combined with other procedures such as aortic valve replacement or coronary artery bypass grafting. We think that these procedures could be an associated factor that hinders any analysis on the evolution of these patients. The aim of this study was to study only the effect of conservative procedures in rheumatic mitral valve.

The results of postoperative echocardiography can demonstrate good results with the repair in the short term, as already shown in other national studies [4]. The presence of mild regurgitation in the postoperative period does not seem to worsen the clinical outcome of these patients [9].

The moderate and severe mitral regurgitation, when detected at follow-up proved to be an independent risk factor for reoperation with an odds ratio of 4.6, ie, following mitral regurgitation increases the risk of reoperation in almost 5 times. This is corroborated by previous study of literature, with patients similar to this study [3,7,8,12,15].

The technique used in our series was described by Braile et al. [2] utilizing a malleable bovine pericardium prosthesis, which is strong and early endothelized without thromboembolic events.

When comparing pre- and postoperative echocardiographic data, considering the systolic and diastolic diameters and left ventricular ejection fraction, we observed that there was a worsening of the ejection fraction. We believe it is an adaptation of the left ventricle after the repair, as the valve became competent.

In this sample, 80% of patients had pure mitral insufficiency or other associated injuries, with the long-term ventricular remodeling. The ejection fraction alone can not lead us to infer a worsening of the patient. This is not confirmed when we assessed the patients' functional class during follow-up, with overall improvement. The assessment of ejection fraction preoperatively may have been overestimated by the presence of mitral regurgitation, which could explain the worsening of the ejection fraction postoperatively. There was significant improvement during follow-up, with concordance with other studies in the literature [3-5].

Most studies reported significant improvement in functional class after valve procedure, either valve repair or prosthesis replacement [3,4,10]. The presence of heart failure postoperatively was another independent risk factor, which makes perfect sense.

Independent factor not previously identified in the literature was the presence of pulmonary hypertension measured by echocardiography preoperatively and is considered moderate when the mean pulmonary artery pressure was measured as greater than 45 mmHg. This factor led to almost twice the risk of reoperation in these patients, this data can serve as a starting point for closer follow-up in such patients.

In relation to valve morphology, few studies were able to identify a type of injury as a predictor, but it seems that the double lesion present behavior worse for late failure of valve repair [13-15]. We could not identify any variable in the anatomy of the valve that was a predictor of reoperation.

Chauvaud et al. [16] in a large series studying 951 patients with mitral regurgitation of rheumatic etiology and follow-up of approximately 25 years, demonstrated probability of being free from reoperation of 55% after ten years of follow-up. In our series, at the end of 10 years of follow-up, the probability of patients being free from reoperation was 70%, but we should note that only 5 patients were at risk during this period of observation. Another important observation is that in the series of Chauvaud et al. patients with pure mitral insufficiency were included, unlike our series, and included patients with mitral stenosis, mitral regurgitation and mitral lesion.

Late mortality in this series was 3.8%, consistent with the literature [4,10]. However, the deaths were not related to heart disease in itself but a result of associated neoplastic illness, one due to a thromboembolic complication after prosthetic valve reoperation, and the last patient, without apparent cause.

The limitations of our study are related to its retrospective nature. Medical treatment was not standardized, it was noted the presence of atrial fibrillation in the pre- and postoperative period.

In conclusion, the results of mitral valve repair in rheumatic patients, when feasible from a technical standpoint and valve morphology, have satisfactory results in the long term, and always appear as an alternative in surgical treatment of this disease. The presence of pulmonary hypertension preoperatively should draw attention to a closer follow-up of these patients due to the long-term risk of reoperation. Older patients with rheumatic valvular heart disease have increased chance of being re-operated when the valve is very committed.

Patients who in the postoperative follow-up present worsening of mitral or functional class must also be followed more often because they have increased risk for reoperation.