BACKGROUND AND OBJECTIVES: Mediastinitis is a serious complication of median sternotomy and is associated to significant morbidity and mortality. The aim of this study is to identify which option of harvesting internal thoracic artery (ITA), pedicled or skeletonized, is associated with lower rates of mediastinitis after coronary artery bypass grafting surgery (CABG) in elderly, in the Division of Cardiovascular Surgery of PROCAPE.
METHODS: Retrospective study of 160 elderly who underwent consecutive CABG between May 2007 and June 2011. Eleven preoperative variables, four intraoperative variables and eight postoperative variables possibly involved in the development of postoperative mediastinitis were evaluated between two groups: CABG with skeletonized ITA (n=80) and pedicled ITA (n=80). Univariate and multivariate logistic regression analyses were applied.
RESULTS: The incidence of mediastinitis was 6.8% (n=11), with a lethality rate of 54.5% (n=6). The skeletonized ITA group were more exposed than pedicled ITA group to obesity (n=12 vs. n=4; 15% vs. 5%; P=0.035) and multiple transfusions (n=25 vs. n=11; 31.2% vs. 13.7%; P=0.008). The pedicled ITA group presented a greater risk of mediastinitis after CABG than skeletonized ITA group (n=10 vs. n=1; 12.5% vs. 1.2%; Unadjusted OR 11.3; 95% CI 1.4 - 241.5; P=0.008). In multivariate analysis, this difference maintained statistically significant (Adjusted OR 5.2; 95% CI 1.5-495.8; P=0.012), being considered an independent association.
CONCLUSIONS: We suggest that elderly should be considered for strategies to minimize risk of infection. In elderly that undergo unilateral ITA, the problem seems to be related to how ITA is harvested. Elderly should always be considered for use of skeletonized ITA.

Mediastinitis is a deep wound infection after median sternotomy, with clinical evidence and / or microbiological commitment of the retrosternal space, associated with sternal osteomyelitis with or without its instability [1-4]. It is one of the most serious complications of median sternotomy and is associated to significant morbidity and mortality [5]. It is also known as deep sternal wound infection [5].

This is an entity with low incidence, occurring in only 1% to 3% of patients after cardiac surgery [6]. However, when it occurs, is associated with high mortality rates, reaching 35% [7].

It has been shown that coronary artery bypass grafting (CABG) is associated with a higher risk of developing mediastinitis compared to other procedures in cardiovascular surgery (valve surgery, correction of congenital heart disease) [8].

In recent years, studies [9-11] have emphasized the use of bilateral internal thoracic artery (ITA or mammary) as the major cause of higher incidence of mediastinitis in coronary artery bypass grafts. However, Sá et al. [8] performed a study in the Division of Cardiovascular Surgery of Pronto Socorro Cardiológico de Pernambuco - PROCAPE, noting an interesting aspect in comparison to these studies: in almost no patient in this service was performed bilateral ITA, performing mostly only unilateral ITA. Although we have performed almost exclusively CABG with unilateral ITA, this surgery was associated with increased risk of developing mediastinitis compared to other procedures.

In a recent publication of our institution [1], we have demonstrated that in patients undergoing CABG who do not undergo bilateral ITA, the problem seems to be unrelated to use or not use unilateral ITA, but related to how ITA is harvested (with favorable results to skeletonized ITA in comparison to pedicled ITA).

Age is always a feared risk factor for mediastinitis and viewed with caution by cardiovascular surgeons [12]. Therefore, the aim of this study is to identify, in the specific subgroup of elderly patients, which option of harvesting ITA is associated with lower rates of mediastinitis after CABG with use of unilateral ITA in our institution.

We studied 160 consecutive elderly patients (age > 70 years) undergoing CABG with use of left internal thoracic artery in the Division of Cardiovascular Surgery of PROCAPE from May 2007 to June 2011.

The two groups were compared and the following variables were assessed (all categorized into yes or no):

c. Hypertension (reported by patient and/or use of anti-hypertensive medication);

d. Diabetes (reported by patient and/or use of oral hypoglycemic medication and/or insulin);

e. Smoking (reported by patient; active or inactive for less than 10 years);

f. Chronic obstructive pulmonary disease - COPD (dyspnea or chronic cough AND prolonged use of bronchodilators or corticosteroids AND/OR compatible radiological changes - hypertransparency by hyperinflation and/or rectification of ribs and/or rectification diaphragmatic);

d. Use of cardiopulmonary bypass - CPB (on-pump or off-pump).

a. Low cardiac output (need for inotropic support with dopamine 4 μg/kg/min or dobutamine or intraaortic baloon at least for a minimum of 12 hours);

b. Reoperation (new sternotomy for bleeding, tamponade, or other reasons during the intra-hospital period);

f. Multiple transfusions (more than 3 units of any blood products in postoperative period before diagnostic definition of mediastinitis);

g. Infection at another site;

The outcome evaluated was mediastinitis after surgical procedure. This variable was categorized into yes or no. Isolated superficial infections from sternal wound with stable and / or sterile sternal dehiscence and / or no macroscopic evidence of deep infection (purulent drainage) were not considered as having mediastinitis. Mediastinitis were considered only with those who met at least 1 of the criteria according to the Centers for Disease Control and Prevention (CDC) [13]:

1. Patient has organisms cultured from mediastinal tissue or fluid obtained during a surgical operation or needle aspiration;

2. Patient has evidence of mediastinitis seen during a surgical operation or histopathologic examination;

a. purulent discharge from mediastinal area;

b. organisms cultured from blood or discharge from mediastinal area;

All patients received prophylactic antibiotics. It is part of the institutional protocol use intravenous cefazolin as the follows: 2 g as the initial dose during anesthesia induction, 1g during entering CPB, 1 g every 4 hours during surgery, 1g every 8 hours for 24 to 48-hours after surgery.

All patients used bone wax for hemostasis of the sternal marrow (it is part of the protocol of our institution its use in all patients undergoing median sternotomy). Patients were selected for cardiopulmonary bypass (on-pump or off-pump CABG) and type of ITA harvesting technique (pedicled or skeletonized) according to the preference of the attending surgeon.

Skeletonized ITA was obtained with artery dissection with scissors and clipping intercostal branches with metal clips without involving any margins tissue around ITA.

Pedicled ITA was obtained with direct dissection of surrounding margin of tissue around the ITA with electrocautery.

There was no change in the way of dissection of ITA during the procedure. When started with a certain technique, ended with the same technique.

All mediastinitis cases were treated with specific antibiotics for germs identified on culture and antibiograms associated with reoperation with mediastinal toilet (many times as necessary).

The data were stored in SPSS program (Statistical Package for Social Sciences) version 15, from which calculations were performed with statistical analysis, and interpretation. The data storage was done in double-entry to validate and carry out analysis of data consistency, in order to ensure minimal error in recording information in software.

This research was submitted to the approval of the Research Ethics Commithee of Complexo Hospitalar do Hospital Universitário Oswaldo Cruz / Pronto Socorro Cardiológico de Pernambuco - HUOC/PROCAPE, according to resolution 196/96 of the National Council of Health [14,15]. 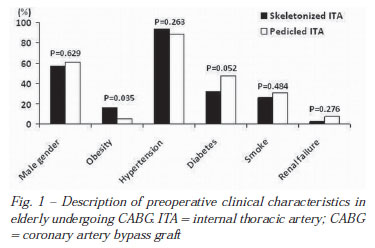 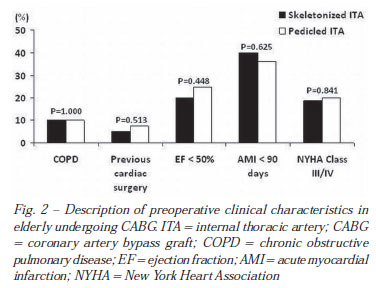 Characteristic of the procedures

There were no statistically significant differences between groups related to the characteristic of the procedures (Figure 3). 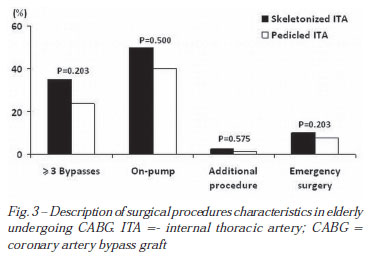 The skeletonized ITA group presented more patients that received multiple transfusions than pedicled ITA group (n=25 vs. n=11; 31.2% vs. 13.7%; P=0.008). The other variables showed no statistically significant differences between groups (Figures 4 and 5). 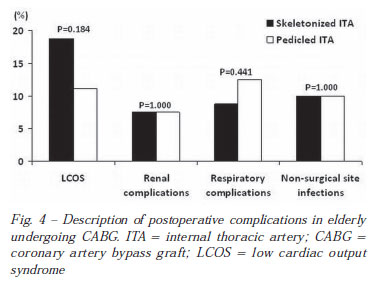 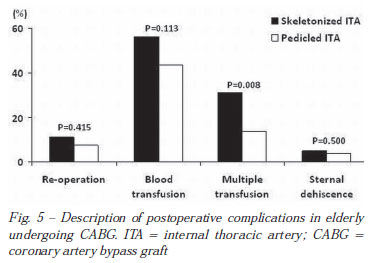 We observed incidence of 6.8% (n=11) of mediastinitis after CABG in the total group (Figure 6). The isolated agents are described in Table 1. The pedicled ITA group presented a greater risk of mediastinitis after CABG than skeletonized ITA group (n=10 vs. n=1; 12.5% vs. 1.2%; Unadjusted OR 11.3; Confidence Interval 1.4 - 241.5; P=0.008). Proceeding multivariate logistic regression analysis, this difference maintained statistically significant (Adjusted OR 5.2; Confidence Interval 1.5 - 495.8; P=0.012), being considered an independent association. 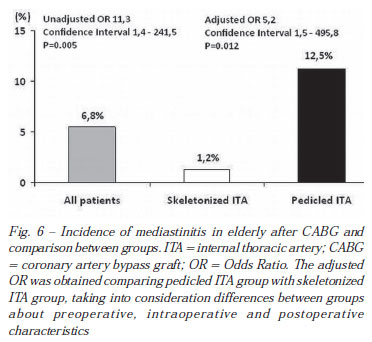 In our study, the incidence of mediastinitis was 6.8% (n=11), above the rates reported in other studies, ranging from 0.2% to 5.0% [16-18]. However, we should note two points. First, a previous study at our institution [8] showed an incidence of 2.4% between 1038 cardiovascular surgeries (involving all types of surgeries - within the range defined in the literature) and CABG was associated with increased risk compared with other cardiac surgeries (CI 3.44 to 8.30, P = 0.0001). Second, age is recognized as an important risk factor for sternal wound infections after cardiac surgery [12]. So we are looking at a "doubled" risk group, justifying excess incidence in the present study.

Many factors have been associated with development of mediastinitis after cardiac surgery [19]. However, there is no consensus as to which factors are most important and how each is an independent predictor of risk for postoperative mediastinitis [19].

Kai et al. [21] observed that incidence of deep sternal infection was significantly lower in diabetics that underwent CABG with use of skeletonized ITA compared to diabetics using pedicled ITA (0.6% vs. 13.0% P = 0.01).

These results were found, probably as a result of better sternal perfusion after ITA skeletonization compared to the pedicled ITA [23-25].

Boodhwani et al. [23] conducted a study with 48 patients, in which each patient was submitted to CABG using bilateral ITA, and all ITAs were dissected skeletonized in left side and pedicled in right side. Patients were then evaluated for sternal perfusion through scintigraphy (radionuclear image). The authors found that sternal perfusion was increased in skeletonized side compared with pedicle side (increase of 17.6%, P = 0.03).

Kamiya et al. [24] showed that the oxygen saturation and blood flow in the microcirculation of the sternum tissue were better when using the skeletonized ITA compared to pedicled ITA.

Santos Filho et al. [25] studied 35 patients submitted to CABG, dividing them into two groups: group A (n=18) had ITA dissected using skeletonization technique and group B (n=17) as pedicle preparation. There was no difference in the two groups relating gender, age and demographic characteristics. On the seventh postoperative day the patients underwent bone scintillography. They observed that group A (skeletonized ITA) showed higher perfusion than group B (pedicled ITA) patients, however, it was not statistically significant (P = 0.127). On the other hand, comparing the diabetic population, seven in each group, there was a marked 47.4% higher perfusion of the sternum in group A (skeletonized ITA) comparing to group B (pedicled ITA) and this difference reached statistical significance (P = 0.004). They concluded that in diabetic subgroup, a significant preservation of the sternal perfusion was observed in patients that undergone skeletonized ITA.

One aspect that reinforces the importance of skeletonized ITA is the fact that the group that underwent CABG with this type of graft in our study, although more exposed than the pedicled ITA group to two factors strongly and independently associated with mediastinitis in other studies - obesity [1] and multiple transfusions [2,26,27], still had a lower incidence of mediastinitis after CABG.

Our study showed that patients who developed mediastinitis stayed more time in the intensive care unit and had higher length of hospital stay (statistically significant) compared with those who did not developed mediastinitis, which reflects the high morbidity and high costs involved with this complication [28]. The lethality rate found (54.5%) was higher to that observed in other studies [29-31], but we must consider that we are studying an older population (only elderly patients).

Other risk factors may be involved, but they are difficult to be measured. The aspect of the bone, which can sometimes show signs of osteoporosis or ischemia, use of bone wax on sternal hemostasis [32], the surgeon's ability, failure to follow the antisepsis procedures, errors in the sternotomy and in the sternum rewiring, and excessive use of an electric scalpel, permanence of central venous catheters [33] are factors that are very often not mentioned but can be important factors in the pathophysiology of mediastinitis.

We suggest that elderly patients should be considered for strategies to minimize risk of infection. In elderly that undergo unilateral ITA, the problem seems to be related to how ITA is harvested. Elderly should always be considered for use of skeletonized ITA during CABG surgery.