BACKGROUND: Sternal wound infection (SWI) after coronary artery bypass graft (CABG) surgery is a major complication. Identifying patients at risk of SWI is essential for the application of preventive measures.
OBJECTIVE: To identify the pre- and intra-operative risk factors, apply the STS risk score and determine the correlation between the risk score and microorganisms isolated from surgical wounds in a Brazilian hospital.
METHODS: This is a retrospective analysis of a database of all CABG surgeries performed in a single institution from 2006 to 2008. Chi-square analysis was used for categorical variables and Student's t-test was used for quantitative variables. Multivariate logistic regression model was used to identify independent risk factors for SWI. P <0.05 was considered significant.
RESULTS: The infection rate was 7.2% (143/1975). The multiple regression analysis found the following risk factors: female gender (OR 2.06; 95%CI 1.40-3.03; P<0.001), BMI>40 kg/m2 (OR 6.27, 95%CI 2.53-15.48; P<0.001), diabetes (OR 2.33; 95%CI 1.56-3.49; P<0.001), number of affected coronary arteries (OR 7.78; 95%CI 1.04-57.79; P<0.001) and use of bilateral internal thoracic artery (OR 3.85; 95%CI 2.10-7.07; P<0.001). Infected patients had a mean score of 9, whereas non-infected patients had a mean score of 7 (P<0.001). There was no correlation between microorganisms, scores and risk factors.
CONCLUSION: Female gender, diabetes, BMI>40 kg/m2, number of affected coronary arteries and use of bilateral internal thoracic artery were associated with a higher risk of infection. The STS risk score can be successfully used and there was no correlation between microorganisms, the score and risk factors at our institution.

Sternal wound infection (SWI) is one of the most serious complications associated with coronary artery bypass graft (CABG) surgery. It is associated with an increase in the period of hospitalization, hospital costs and need for surgical re-intervention [1-5]. It is extremely important to identify patients undergoing CABG surgery who have a high risk of developing wound infection in order to provide effective preventive measures.

Several pre- and intra-operative risk factors have been associated with an increased incidence of SWI with the incidence of mediastinitis ranging from 0.4% to 5.3%, and early and in-hospital lethality varying between 10% and 47% [1,2,4-10].

Gardlund et al. [11] have shown a correlation between the presence of microorganisms and risk factors for SWI.

Fowler et al. [12] published, in 2005, a wound infection risk score, using logistic regression analysis, based on data from 331,429 cases from the Society of Thoracic Surgeons National Cardiac Database (STS). A simple model with 12 variables was developed and validated for the identification of patients who are at high risk for infections after cardiac surgery.

The Instituto Dante Pazzanese de Cardiologia, located in São Paulo, is a public university hospital with a capacity of 350 beds for cardiovascular surgeries. Approximately 2,000 heart surgeries are performed annually, and about 1,000 of these are isolated CABGs. The Institution has a hospital infection control and prevention program and performs active disease surveillance, following criteria from the Center of Disease Control and Prevention (CDC) [13].

There may be population differences, and this model has not yet been applied to our population. The objectives of the present study were: to identify the pre- and intra-operative risks associated with sternal wound infection; to apply the STS risk score to patients undergoing coronary artery bypass graft surgery in a Brazilian Tertiary Hospital of Cardiology; and to analyze the correlation between etiological agents of SWI with the STS risk score and associated risk factors.

From January 2006 to December 2008, data were prospectively collected from CABGs performed at this institution.

The diagnosis of sternal wound infection followed the criteria for infection set by the CDC [13]. All patients were evaluated for a period of up to 30 days after hospital discharge, and patients who had infection during this period were identified.

Details of surgical procedures for treatment of SWI

Acute wound infection treatment consisted of drainage of purulent collections, aggressive debridement of necrotic tissue and closure. Some patients required sternal rewiring or the use of pectoralis major muscle or omental flaps to increase the vascularization [14]. Although these treatments were effective in most of the patients, some did not respond and developed a wound dehiscence at different anatomical levels, sometimes even with a loss of the sternum and rib portions. In these secondary wounds plastic reconstruction was necessary.

The Chi-square test or Fisher's exact test, as appropriate, was used to confirm the association between qualitative variables and infection in univariate analysis. To identify differences between groups using quantitative variables, Student's t-test was used for variables with normal distribution. The Mann-Whitney test was used for variables without normal distribution. A multivariate logistic regression model was used in to identify independent risk factors for SWI. P-values<0.05 were considered statistically significant.

The study was approved by the Local Medical Ethics Committee.

The clinical characteristics of patients with SWI are described in Table 1. 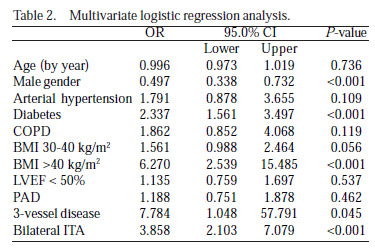 The intra-aortic balloon pump was only used in 61 (3.1%) patients, and four (2.8%) of them developed wound infection.

In relation to the analysis of the wound risk score proposed by the STS, it was observed that the patients suffering from sternal infection had a higher score than non-infected patients (9 and 7, respectively; P<0.001).

The isolated etiological agents of infection, with the possibility of more than a single agent affecting each patient, are described in Table 3. 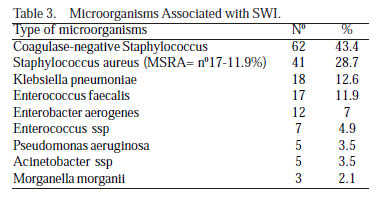 There was no correlation between the different etiological agents and pre-operative risk factors and mortality. There was also no difference in mortality between infected and non-infected patients (8.4% vs. 6.8%, respectively; P=0.309) during hospitalization.

Our institution is a public teaching hospital and has an infection control service that performs active disease surveillance, which enables the identification of wound infections after discharge. The higher rate of SWI found in the current study may be due to the post-discharge notification, which was different from what has been published in scientific journals [12,17].

Diabetes was associated with a higher rate of SWI, in accordance with some studies [7,10] and in contrast with others [1,4,5,19,20]. A high BMI was identified as an important risk factor for SWI, and is supported by the majority of studies on this topic [2,4,5,10]. Milano et al. [5] discuss some factors that may explain why obesity is a risk factor, such as, for example, the dose of the prophylactic antibiotic, which is not corrected on the basis of the patient body mass index, difficulty for patient skin folds to remain sterile during the procedure, and adipose tissue itself, which may function as a substrate for infection.

The number of affected coronary arteries, found in our study, was associated with higher rates of SWI, which was in agreement with the study presented by Risnes et al. [18].

There was also no increase in mortality in our population relative to those not affected by SWI. This finding is in agreement with a recent study presented by Risnes et al. [18]. The early identification of SWI, in association with broad-spectrum antibiotic therapy and adequate surgical intervention can explain this finding.

In our study population, a higher STS risk score was found in patients with SWI than in non-infected patients (9 vs. 7, P<0.001). Despite the differences between the populations from the STS database and a Brazilian public teaching hospital, the STS score was validated and showed similar results; thus, it can be applied to other populations.

The correlation between microorganism presence and the depth and severity of wound infections has not been well studied. Gardlung et al. [11] have shown that there is a relationship between high BMI and SWI caused by coagulase-negative Staphylococcus. In our population, the correlation between microorganisms that cause SWI and the risk score proposed by Fowler was evaluated; however, there was no significant difference between Gram-negative and Gram-positive bacteria (11 vs. 9, P=0.063). These data are unique given that most studies do not evaluate the risk of infection according to the etiological agent. This may suggest that the sample did not have enough statistical power for an association with risk factors for SWI, or it may also indicate that all patients are susceptible to SWI regardless of the microorganism causing it.

The patients referred for CABG with high risk scores require preventative measures that will reduce the development of SWI. Given the risk factors found in this study, intervention would not be effective at reducing the rate of wound infections because a high BMI, female gender and the number of arterial lesions are not amenable to intervention. The intervention possibilities are limited to surgical procedure, and the use of bilateral internal thoracic artery grafts in women with a high BMI and three vessel injuries are not recommended. Adequate glycemic control in diabetic patients is mandatory. New strategies have been developed to improve the sternal hemostasis, and possibly in the future will result in a lower incidence of SWI [30]. The actions to prevent hospital infection and good practices in general must be practiced in patients with higher risk factors to avoid this problem that is associated with an increase in the period of hospitalization, hospital costs and need for surgical re-intervention [31].

A limitation of this study is that only one public hospital in São Paulo was evaluated, such that the sample may not represent the general Brazilian population.

Only pre- and intra-operative risk factors were analyzed. The use of the intra-aortic balloon pump and skeletonized internal thoracic artery grafts were not analyzed both because they were not used very much in during this study. Some other known risk factors for SWI (for example, blood transfusions [32]), were not analyzed.

Female gender, diabetes, BMI > 40 kg/m2, number of affected coronary arteries and the use of bilateral internal thoracic artery grafts were associated with a higher risk of SWI. The STS risk score can be successfully used in a study population in a Brazilian Tertiary Hospital of Cardiology for patients undergoing revascularization surgery.

In this study, no correlation was found between the etiological agents isolated in SWI and risk score.