The history of Medicine, which began when a human being first felt the need to alleviate the suffering of a fellow, is very rich. Within this history, the development of cardiac surgery is certainly the most beautiful one. The pioneering spirit has always been its most striking feature, since the first suture of a heart wound by Ludwig Rehn in 1896, when the heart was still considered an untouchable organ. Less than one hundred years later, the man, after cutting and suturing the heart, replacing its valves and even the beats, removed the organ of a person and put it back in another person's chest, where he continued making progress.

Dr. Cid Nogueira was, undoubtedly, one of these pioneers. He arrived in Porto Alegre, Rio Grande do Sul in 1961, where mechanical ventilation was little-known, where there were very few Postoperative Recovery, and, where the surgery was still performed by a specialist in general practice and surgery with anesthesia in many towns of Rio Grande do Sul countryside, often being performed by a nurse technician. His goal was to develop a program of cardiac surgery with cardiopulmonary bypass use. 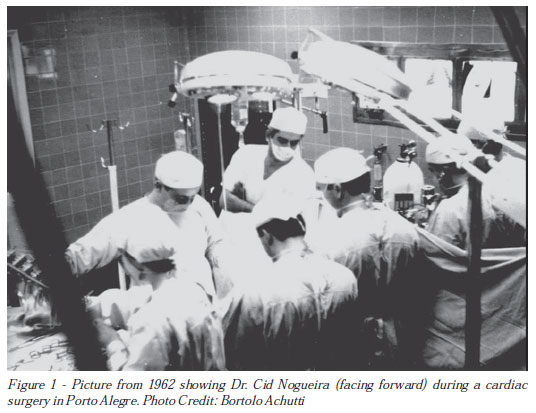 The first surgery performed with cardiopulmonary bypass was performed by John Gibbon in 1953 in the USA. In 1961, our city and our state had in its midst a team performing what was considered an important leap in the history of medicine: the use of a machine to replace the heart, while the cavities were approached surgically. In September 1960, a heart valve was replaced for the first time by Albert Starr, in Oregon, also in the United States. In 1962, Dr. performed the same procedure in Porto Alegre.

The diagnostic methods in cardiology had their great development. Surgery as a whole, achieved an unexpected progress, since the heart surgery required more than general surgery for their accomplishment. Excellent technician, trained in Cleveland, one of the cradles of modern cardiac surgery, leveraged the progress in many fields of medicine in our state.

At his 82 years old, Dr. Cid deceased on 1 October, 2011, but left among us a school that followed in his footsteps. I am very proud to have been recognized by him as one of his disciples.