Extracorporeal membrane oxygenation (ECMO) is one of the most important life support techniques for patients with severe but reversible cardiac and/or pulmonary failure. Despite advance in technique and management of ECMO, nosocomial infection (NI) is still one of severe complications of ECMO that remarkably increases morbidity and mortality[1].

Comparing with other patients in intensive care unit (ICU), the patients undergoing ECMO are with increasing possibility of NI due to cannulation disrupting the skin barrier and allowing pathogens invasion and the hollow fiber structure of the oxygenator contributing to pathogens establishment[2,3]. Several studies have analyzed the risk factors and pathogens of ECMO-related NI[4-6], but different studies have obvious heterogeneity from baseline characteristics including populations (pediatric vs. adult patients), number of patients, concomitant diseases, causes of cardiac or pulmonary failure, ECMO cannulation access (percutaneous vs. intrathoracic), and ECMO support mode (venoarterial [VA] vs. venovenous). Such heterogeneity may affect the incidence, risk factors, and pathogens of ECMO-related NI.

In addition, the data on ECMO-related NI in adult patients after cardiac surgery remain scarce.

Therefore, we focused on ECMO and cardiac surgery parameters and investigated a single-center large sample homogenous group to analyze the incidence, risk factors, and pathogens of ECMO-related NI in adult patients who have undergone cardiac surgery and VA-ECMO support.

According to the inclusion criteria, 322 patients were recruited to this study. Baseline characteristics, surgical parameters, ECMO parameters, and in-hospital outcomes were reviewed from medical records. This is a retrospective cohort study in accordance with the Ethical Guideline of the Committee on Human Experimentation of our institution, and the informed consent was obtained from the patients.

The indications for ECMO were identified by extracorporeal life support physicians and cardiac surgeons. VA-ECMO mode with cannulation via femoral artery and vein was a predominant procedure duo in all patients who underwent cardiac surgery. Systemic anticoagulation was achieved by continuous intravenous heparin infusion to maintain activated clotting time in a range of 180-200 s. ECMO flow was initially set with a rate of 100 ml/kg/min and the flow level was tailored to achieve adequate tissue perfusion evaluated by lactate level and end-organ function. The management protocols of ECMO followed the Extracorporeal Life Support Organization (ELSO) guidelines[7].

Incidence and Pathogenic Microorganisms of NI

Among 322 patients, 131 suffered from a total of 143 infectious events. These included 40 cases of BSI, 76 cases of RTI, 10 cases of UTI, and 17 cases of SWI. The incidence of ECMO-related NI was 85.4 cases per 1000 ECMO days. The incidences of ECMO-related NI and BSI were gradually increased with prolonging duration of ECMO support (Figure 1). The receiver operating characteristic curve showed that a cutoff value was 92 hours (sensitivity 0.794, specificity 0.497), which indicated a significantly increased risk of NI with ECMO support > 92 hours (Figure 2). 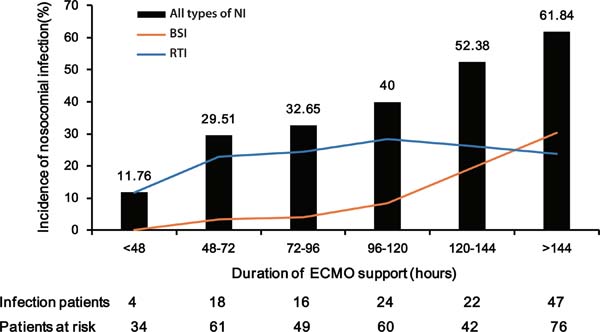 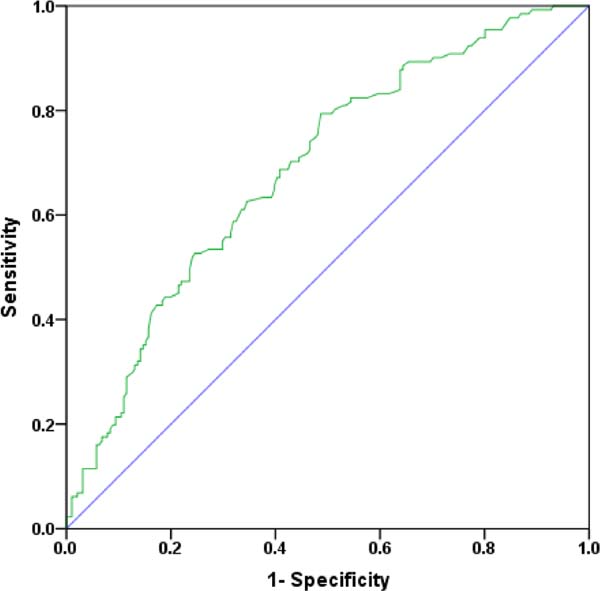 Gram-negative bacteria were predominant pathogens and accounted for 64.01% of the total culture-positive pathogens, Gram-positive bacteria for 27.75%, and fungi for 8.24%. Acinetobacter baumannii was the most common pathogen of BSI and RTI. Candida (70%) was the main fungal pathogen. The pathogenic microorganisms of NI are showed in Table 4.

Multivariate Analysis of Risk Factors for NI and In-Hospital Death 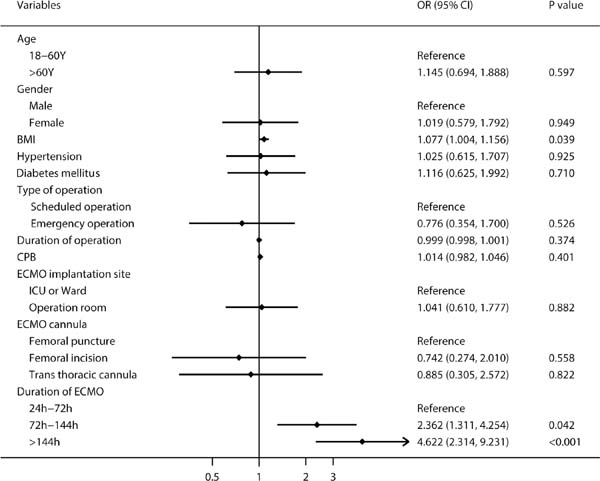 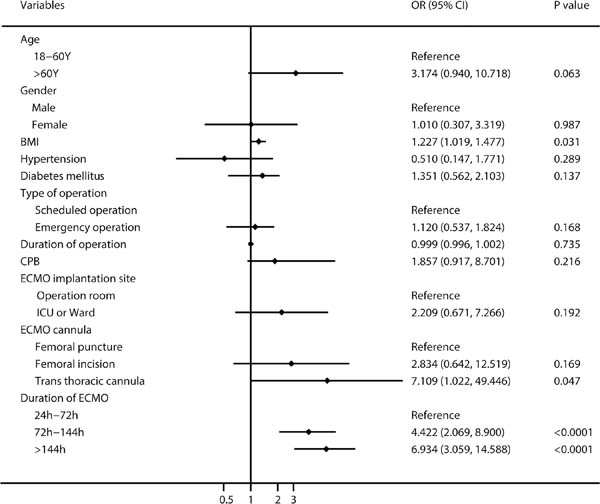 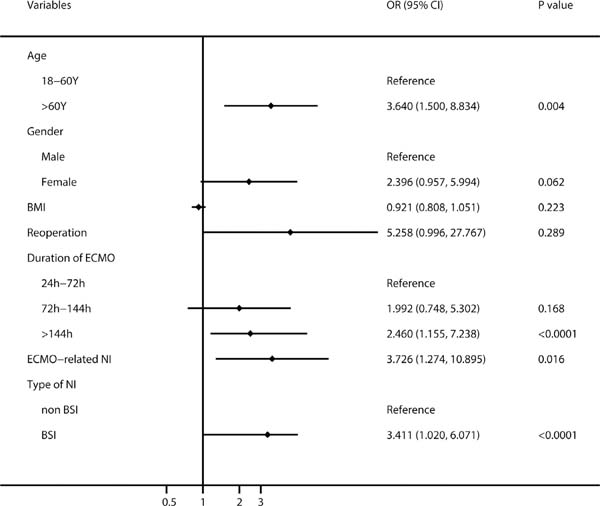 To the best of our knowledge, this investigation was the largest single-center observational study analyzing characteristics of ECMO-related NI in adult patients who underwent cardiac surgery. In this study, 40.68% (131/322) of the patients suffered from NI during ECMO support with a NI incidence of 85.4 cases/1000 ECMO days. However, the latest literature reported that the rate of NI was 30.4% during ECMO support[7], and the incidence of ECMO-related NI ranged from 11.92 to 43.3 cases/1000 ECMO days[8,10]. The ECMO population was often companied by severe comorbidities, patients in our study were exposed to invasive procedures and suffered from severe surgical complications before ECMO support, which may increase the risk of ECMO-related NI. Moreover, the patients often required prolonging time of mechanical ventilation, central venous catheters, and urinary catheter, or there was an additional needing for intra-aortic balloon pump during ECMO support or continuous renal replacement therapy due to deleterious hemodynamic conditions after cardiac surgery, which also contributed to high incidence of ECMO-related NI in our study.

Regarding the type of ECMO-related NI, BSI was the most common in most studies, followed by RTI, UTI, and SWI[19,20]. But our study showed that RTI was predominant, followed by BSI, SWI, and UTI. Most patients were assisted by invasive mechanical ventilation before ECMO support and required prolonging mechanical ventilation due to severe heart failure, which may explain the difference of infection types between our ECMO cohort and the general ECMO cohort. Moreover, antibiotic prophylaxis may affect infection types. Despite of lacking study-demonstrated benefits, antibiotic prophylaxis is commonly used at ECMO centers, according to surveys of ELSO member sites[21,22].

The pathogens species causing ECMO-related NI change with therapy chronology and antibiotics renewing. ELSO reported that the majority of culture-positive pathogens in patients who have undergone ECMO were coagulase-negative Staphylococci, Candida albicans, and Pseudomonas aeruginosa[23]. In our study, the Gram-negative bacilli were the most common pathogens, which were often isolated species in the ICU settings. And the most common pathogen causing BSI and RTI was Acinetobacter baumannii, which was conditioned pathogen. Severe morbidities after cardiac surgery might disturb the immune system and break ecological balance of the conditioned pathogen and the host, resulting in infections related to conditioned pathogen. In addition, Candida was the main fungal pathogen in both BSI and RTI, which was associated with prolonged use of wide-spectrum antibiotics during ECMO support.

This study had limitations regarding susceptibility to inherent bias from retrospective data from a single center. But a homogeneous cohort and relatively large number of patients allowed us to draw strong conclusions.

The prolonged duration of ECMO support was an independent risk factor for NI after cardiac surgery. Therefore, the best strategies to prevent ECMO-related NI in these patients were as follows: timely surgery correcting causes of cardiopulmonary failure - such as myocardial ischemia due to susceptible acute occlusion of grafts, unsatisfactory repair of heart valves, and delayed cardiac tamponade to shortening duration of ECMO support - and considering to wean mechanical ventilation whenever possible, when patients meet protocols of extubation.

JW Substantial contributions to the conception or design of the work; or the acquisition, analysis, or interpretation of data for the work; drafting the work or revising it critically for important intellectual content; final approval of the version to be published

LW Acquisition, analysis, or interpretation of data for the work; final approval of the version to be published

MJ Acquisition, analysis, or interpretation of data for the work; final approval of the version to be published

ZD Acquisition of data for the work; final approval of the version to be published

XH Interpretation of data for the work; drafting the work or revising it critically for important intellectual content; final approval of the version to be published