Objective: Patients with isolated lesions in the proximal left anterior descending artery (LAD) have been demonstrated to benefit more from surgical treatment than percutaneous coronary intervention (PCI). However, with the less invasiveness of PCI, the majority of the patients have been referred for this latter procedure. We report herein on the inferior ministernotomy approach for the treatment of patients with single LAD lesions, with off-pump anastomosis of the left internal thoracic artery graft. Method: Fourteen patients, consecutively operated on using this technique with the LITA graft anastomosed to the LAD, were examined. The mean age of the patients was 56.7 ± 10.1 years. The length of the skin incision varied from 7 to 9 cm and only the distal sternum was split longitudinally. The anastomosis was facilitated with the use of an Octopus-3 stabilizer (Medtronic). Results: All patients had satisfactory postoperative outcomes, the length of postoperative hospital stay ranged from 2 to 6 days (median 3 days). No ECG changes or enzymatic rises were seen in this series. One patient was re-admitted for wound infection. Conclusion: The ministernotomy approach allows safe accomplishment of off-pump LAD grafting, providing the long-term benefits of using the LITA.

Recent studies have demonstrated that patients with isolated lesions of the proximal left anterior descending artery (LAD) achieve greater clinical benefits when submitted to surgical treatment using the left internal thoracic artery (LITA) [1-3]. Observational data, over the last decade, demonstrated that there is a lower incidence of cardiovascular events and greater survival when the LITA is utilized in coronary artery bypass grafting.

However, with the reduced invasiveness of the percutaneous coronary intervention (PCI), the majority of patients with isolated injuries of the LAD have been referred for this type of procedure. The utilization of smaller operative incisions and doing without cardiopulmonary bypasses (CPB) might minimize the invasiveness and the surgical aggression with real benefits for the patient.

The objective of this work is to report on the utilization of ministernotomy as a technical approach for the treatment of patients with single injuries to the LAD, using LITA grafts without the use of CPB.

In this series 14 consecutive patients with single injuries of the LAD confirmed by coronary cineangiography were studied. All patients were submitted to coronary artery bypass grafting (CABG) using ministernotomies. LITA grafts were anastomised to the LAD in all patients. Nine patients were male and five were female with ages ranging from 35 to 69 years old with a mean of 56.7 ± 10.1 years. The associated comorbidities were: prior myocardial infarction in eight patients (57.1%), diabetes mellitus in four (28.5%), chronic liver disease in one (7.1%), peripheral artery disease in one (7.1%), previous angioplasty of the right coronary artery with the implantation of a stent in one (7.1%) and chronic obstructive pulmonary disease in one (7.1%) patient.

The ejection fraction measured by echocardiography (Teicholz method), varied from 47% to 75% (mean 59.8% ± 9.6). All the patients continue to be clinically followed up. The protocol of this study was approved by the institution's Ethics Committee.

The LITA is dissected from the thoracic wall using electric cautery close to its junction with the left subclavian artery, employing the skeletonization technique. Anticoagulation is achieved using a single dose of 400 IU/kg of heparin.

Subsequently, the pericardium is partially opened lengthwise and the heart is moved medially, using small compresses on the left ventricle lateral wall to expose the LAD. A tourniquet of 4-0 polypropylene thread is placed proximal to the site of the coronary arteriotomy. Anastomosis of the LITA with the anterior descending artery is achieved with a continuous suture employing a single 7-0 polypropylene thread without using CPB.

The anastomosis is facilitated by using Octopus® 3 (Medtronic, Inc) suction stabilizers - Figure 2. Figure 3 shows the cutaneous incision in a patient in the immediate postoperative period. 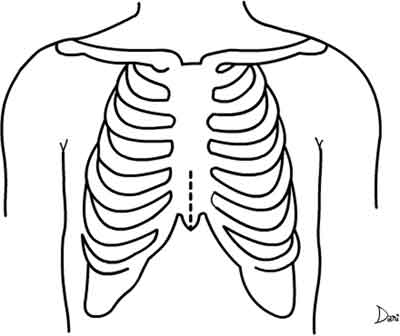 All the patients had a good evolution and were released from hospital after between 2 to 6 days of the postoperative period (median 3 days). No changes in the ECG or enzymatic increases were seen in this group. One patient was re-hospitalized due to infection of the surgical wound.

The length of follow up was 11 to 34 months (mean 22.6 months). Twelve patients are asymptomatic, one patient died from a stroke after 11 months of follow-up and one patient had a re-incidence of angina. For this latter patient, a control coronary cineangiography showed severe stenosis of the medial segment of the LITA graft, probably due to a lesion caused during dissection.

Cardiovascular surgeons have been trying hard to find new less-invasive techniques with less organic aggression over the last decade. In particular, two aspects have been prioritized in this task: smaller incisions to reduce the surgical aggression and to avoid CPB to diminish the systemic inflammatory response and risk of neurological events.

CABG currently presents with low morbidity and mortality rates and provides late results that are safe and reliable; however, the surgical aggression caused by sternotomy and the use of CPB increase the necessity of longer hospital stays. Elimination of the CPB and smaller incisions may provide a quicker recovery with earlier hospital release giving a proportional reduction in hospital costs.

Although PCI has aggregated new developments, with stents covered with drugs (sirolimus [Cypher®] and paclitaxel [Taxus®]), meta-analytical studies demonstrated that they do not provide any benefits in the reduction of infarction or death when compared to conventional stents. Additionally, the high cost of this type of device is incompatible with the budget in health and with the published results [4].

Grafting of the LAD by off-pump ministernotomy might still be a more effective alternative in cases of total occlusion, distal stenosis, small caliber vessels, selected cases of complex coronary trunk lesions where the results of PCI are still more restrictive than the studies of selected cases [5].

The inferior ministernotomy approach offers some advantages, such as an easy access to the LAD and the possibility of dissection of the LITA under direct vision. It also allows planning of the extension of the utilization of this technique, as dissection of the right internal thoracic and gastroepiploic arteries for use as pedicled artery grafts is also possible. Additionally, access to the posterior descending artery is facilitated by this incision.

Inferior ministernotomy has been used as 'J' or 'L' techniques [6,7]. These techniques use a second sternal incision to the left, generally in the 3rd intercostal space, which can increases the risk of injury to the LITA by the retractor and sternal pseudo-arthrosis.

The difficulties with the anastomoses of the LITA with the LAD through the left anterior ministernotomy encouraged us to develop the inferior ministernotomy. This latter technique presents advantages when compared to the left anterior ministernotomy, which was the first approach developed for minimally invasive CABG surgeries. The advantages include greater comfort for the surgeon who works with a more familiar and routine incision, even though it is smaller; if there are complications the incision can be rapidly extended and converted to total sternotomy. Additionally, through this incision it is possible to have access to both internal thoracic arteries and also to the right gastroepiploic artery, which may be utilized in pedicled arterial grafts (although, without the necessity of a proximal anastomosis on the aorta) for revascularization of the three coronary arterial systems. For this, there is clearly a necessity to improve and develop new devices that allow greater access to the heart.

Skeletonization of the LITA is important to perform this technique, as it enables the attainment of longer pedicles which reach the site of the anastomosis with the LAD more comfortably and without tension. Additionally, skeletonization preserves the arterial vascular connections of the sternum, circumventing devascularization and the consequent risk of sternal necrosis [8].

To avoid distal injury of the coronary artery, only proximal clamping is used. Another important aspect related to the quality of the surgery is the utilization of suction stabilizers, which immobilize the site of the coronary artery and allow better anastomosis techniques to be used. For this series, an Octopus 3® stabilizer (Medtronic, Inc) was used.

With the incorporation of new devices that allow better exposure (both for the dissection of the internal thoracic arteries and the coronary arteries) better results and expand the use of the technique for multiple artery revascularization utilizing pedicled grafts only may be possible. In the only patient in this series who had recurrence of angina, the angiography demonstrated significant stenosis of the LITA, probably due to injury during dissection. An improved access to the operative field may contribute to avoid this complication.

The advantage related to the less invasiveness of this technique is the possibility of earlier hospital release, with reduction in the hospitalization and a consequent reduction in costs. Additionally, there is a reduction in the necessity of blood transfusion; none of the patients in this series required transfusions.

This technique combines the advantages of limited sternal incisions with the benefits of off-pump revascularization.

Thus, from prospective randomized studies of patients with injuries of the LAD in isolation, where the superiority of the results with surgical treatment using LITA grafts is well known, it is possible to affirm that minimally invasive CABG surgery is the first-line choice giving safe and lasting results over the long term.

Ministernotomy allows safe off-pump surgical CABG of the LAD with the long-term benefits of using the LITA.