The term single ventricle refers to congenital cardiac anomalies in which there is only one functional single ventricular chamber giving rise to the great vessels. It may occur due to a failure of the ventricular septation or hypoplasia of one of the ventricles. Some other congenital heart defects may also share the characteristics of a functionally single ventricle for example tricuspid atresia. Surgical therapy consists of palliative procedures such as pulmonary artery banding and systemic arterial to pulmonary artery shunting and definitive repair procedures such as right heart bypass and ventricular septation procedures. The septation procedure is rarely performed [1].

Patients with functionally single ventricles have bad prognosis usually resulting in heart failure even in operated cases. Patients to whom right heart bypass operations had been applied have a 73% 15-year survival under optimum conditions (except for right atrium to right ventricular connections) [2]. Right heart bypass operations, except for right atrium and right ventricle connections, lack a pulsatile pulmonary ventricle system and lack volume returning to the common ventricle. This results in a high central venous pressure. To solve this problem, we tried to experimentally create a pulmonary ventricle which produces pulsatile pressure.

In order to create a pulsatile pulmonary ventricle system, we designed a model. In this model, the right heart would be bypassed and there would be an artificial pulmonary ventricle system which would take the place of the right ventricle (Figure 1). This model was demonstrated in six sheep hearts under open heart surgery conditions. The sheep weighed 40 to 45 kg and their ages were from 1.5 to 2 years old. Sheep are preferred for the experimental model due to the fact that they are common in our country and sheep are an appropriate animal model for cardiac research [3-5]. The study was approved by the local Ethics Committee. The experiment was performed according to the Ethics Committee on Animal Research, Ege University Medical School, Ýzmir, Turkey. The study was funded by the authors. The animals were sacrificed after completion of the hemodynamic measurements. 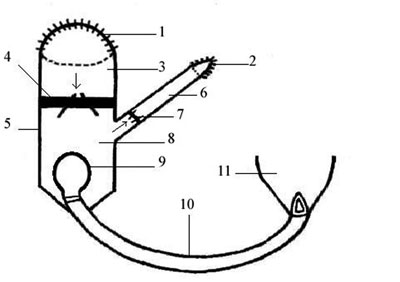 Six sheep underwent heart surgery following general anesthesia initiated with xylasine. The sheep were submitted to median sternotomy. After cannulation of the aorta, bicaval venous cannulations were performed. The cavas were controlled by the application of snares. The surgery was performed on the beating heart using cardiopulmonary bypass. The aorta of the sheep was not clamped.

An elastic (balloon-like) material, whose diameter can change with pressure, was fixed onto the end of a no. 28 venous cannula. When this cannula was inserted in to the left ventricular apex, it was seen that the balloon inflated on each systole (Figures 1 and 2). 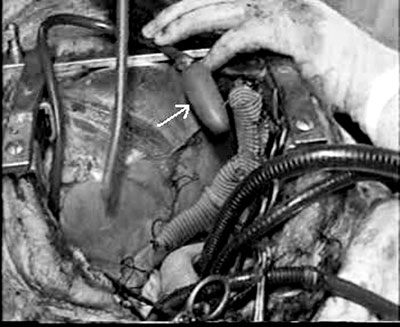 Fig. 2 - An elastic (balloon-like) material, whose diameter can change with pressure, was fixed onto the end of the no. 28 venous cannula. When this cannula was inserted in the left ventricle apex, the balloon was seen to inflate on each systole. The arrow indicates the balloon which was connected to the left ventricular apex using a no 28 cannula.

In order to create a pulmonary ventricle and a right atrium, a mechanical 29-mm mechanical heart valve was placed into a 30-mm, 15-cm long Dacron graft with 2-0 running silk sutures in a way that it would open to two thirds of the graft diameter. One third of the graft was anastomosed to the right atrium of the patient with 3-0 polypropylene sutures (Figures 1 and 3). 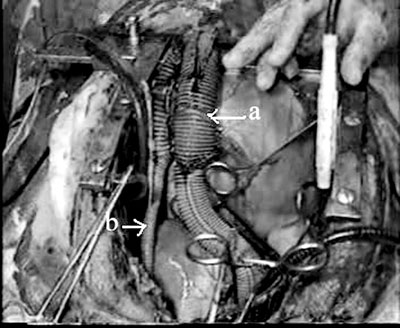 The elastic part of the no. 28 venous cannula which inflated on systole and deflated on diastole was inserted to a position 2/3 along the 30-mm Dacron graft and the graft was secured over the venous cannula using a silk suture. Thus, a ventricle producing pulsatile flow was obtained (Figures 1 and 3).

The pathology of mortality after right heart bypass operations (except for RA-RV connections) seems to be the non-pulsatile pulmonary flow and lack of volume in the ventricle which in fact causes chronic volume overload. Pulsatile pulmonary blood flow plays an important role in regulating shear-stress-mediated release of endothelium-derived nitric oxide and endothelin-1. It is also important in reducing pulmonary vascular resistance by passive capillary recruitment. A long-term non-pulsatile flow was show to lead to endothelial dysfunction. This may be involved in distention and vascular remodeling due to the increase in pulmonary vascular resistance. Non-pulsatile flow can lead to increased patency of the arteriovenous shunt, which might be, at least in part, involved in the development of pulmonary arteriovenous fistula and cause limitations after the Fontan operation [6]. A pulsatile bidirectional cavopulmonary shunt was reported to be useful for high-risk Fontan patients not only in the staged Fontan operation, but also as a definitive palliation [7].