The case of a 36-year-old male suffering from left sinus Valsalva aneurysm into anterior right ventricle and severe aortic valve regurgitation is presented. Diagnosis of this association was achieved before surgery by cardiac catheterization and Echocardiography. The patient was submitted to surgical repair by closing the orifice of the aneurysm using a bovine pericardium patch. The aortic valve regurgitation was repaired using Trusler's procedure.

Valsalva sinus Aneurysm (VSA) is a rare disease which is frequently congenital or forms as a consequence of endocarditis or trauma [1]. It most commonly involves the right coronary sinus, followed by the non-coronary sinus and more rarely the left coronary sinus [2]. During their evolution, VSAs can cause a fistula or rupture to the wall or the heart cavities. In left VSA, these complications occur to the right ventricle or atrium, the left atrium or to the pericardium and can lead to heart tamponade [3]. It is frequently associated with a defect of the interventricular septum or prolapse of the aortic valve [4].

Treatment of VSAs and for associated defects when present is surgical. Here one case is reported and publications together with the surgical conduct are discussed.

The case of a 36-year-old patient weighing 65 kg and suffering from arterial hypertension is reported. Progressive dyspnea on effort, nocturnal paroxistic dyspnea, edema of the lower limbs and an increase in the abdomen were reported for seven months leading up to the patient's hospitalization. Initial treatment was digitalis, diuretics and an angiotensin converting enzyme inhibitor. There was partial improvement of the symptoms and the patient was released from hospital.

Five months later the patient was again hospitalized with heart failure, but this time in a tertiary hospital in the state of Rio de Janeiro. There was no report of pneumopathy, active rheumatic fever, alcoholism or use of illegal drugs. There was a significant improvement after treatment for heart failure. During the clinical examination the patient was lucid, conscious, the mucous membranes were a normal color, eupneic, with pathologic jugular swelling and visible arterial heartbeats at the neck, ruddy, hydrated and acyanotic. The heart rhythm was regular and B3 was present, diastolic murmur ++/6 at an aortic and aortic accessory focus, systolic murmur ++/6 at the 5th left intercostal space, regurgitation-type hemiclavicular line with irradiation to the axillary region and systolic murmur of ++/6 with a positive Rivero Carvalho maneuver. Pulmonary auscultation was clear; the abdomen was distended and with moderate ascitis. The liver was palpable 3 cm from the costal border; the patient had significant edema of the lower limbs which were cold and weak but without pain on touch. The right brachial artery pressure was 140/50 mmHg (systolic/diastolic pressures).

The patient had sinus rhythm, the QRS axis was +60º and +90º with sinus tachycardia and left atrial overload. The heartbeat was 100 bpm.

A transthoracic echocardiogram demonstrated increases of the left ventricle and atrium with the systolic function of the left ventricle preserved. Severe aortic regurgitation was seen by color Doppler as was slight mitral and tricuspid regurgitation. The patient was suffering from significant pulmonary artery hypertension and pericardium effusion.

These examinations demonstrated increases in the left ventricle and atrium with severe aortic regurgitation and a left VSA. The systolic function was preserved and no aortic dissection was found. The coronary arteries were normal.

During the operation, a VSA was evidenced with rupture to the aortic wall measuring 2 cm in diameter containing blood clots that covered the right ventricle anterior wall. The tricuspid aortic valve presented with enlargement of the left coronary leaflet giving significant aortic insufficiency.

Transsternal median thoracotomy was performed. Opening the pericardium demonstrated that the overall heart area was enlarged and the left ventricle hypertrophied. The aneurysm was located in the right ventricular wall (outflow tract) measuring 3 cm (Figure 1). The ascending aorta was isolated and heparin was administered at a dose of 400 IU/kg followed by cannulation of the two vena cavae for cardiopulmonary bypass with arterial return by the ascending aorta. Drainage of the left ventricle was achieved using the right superior pulmonary vein. 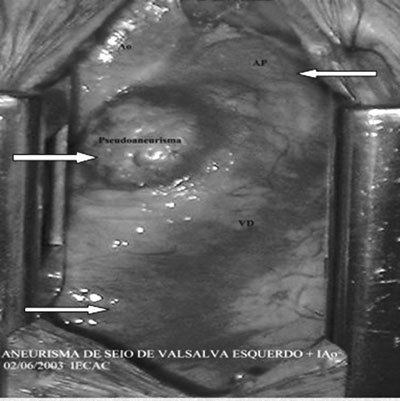 Cardiopulmonary bypass was employed with hypothermia at 34ºC and suction of the left ventricle. Induction of cardiac arrest was achieved with aortic clamping which was then opened by transversal sectioning followed by the use of myocardial protection with a hyperkalemic sanguineous cardioplegic solution in each coronary ostium for three minutes. Reinfusion of the cardioplegic solution was performed at 15-minute intervals. The aortic wall was very thick and there was a large left VSA near to the right coronary sinus with an internal diameter of 2 cm (Figure 2). 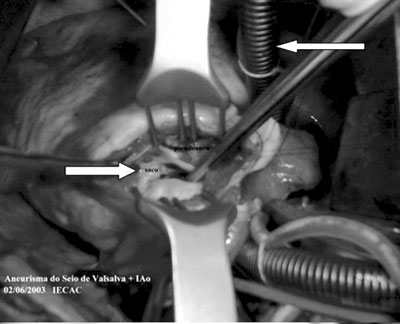 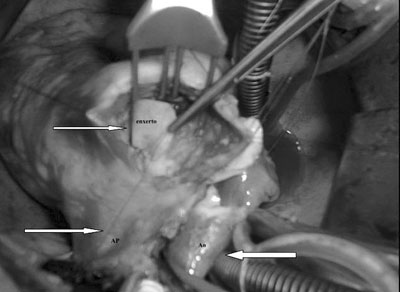 The right ventricle anterior wall was reconstructed with 4-0 monofilament thread running sutures. The aortic valve was tricuspid with thickened leaflets. A test was performed using saline solution which demonstrated significant aortic insufficiency with prolapse of the left coronary leaflet which was elongated and redundant. Repair of the aortic valve was made by the Trusler's procedure, resulting in adequate cooption of the three leaflets (Figure 4). Suturing of the aorta was performed concomitantly to warming of the patient and removal of air from the heart chambers. The aortic clamp was released. 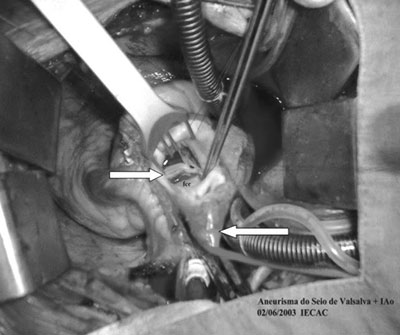 Fig. 4 - Open aorta in the final phase of the aortic valve surgical repair using the Trusler's procedure indicated by left upper arrow with the ascending aorta and the superior vena cava shown by the right lower arrow

Reversal of ventricular fibrillation was achieved using an electric shock of 30 J. The cardiopulmonary bypass was removed when the temperature reached 37ºC. Volemic replacement was made according to left atrium pressure. Hemostasis was reversed and a temporary pacemaker electrode was fixed in the right ventricle, drainage was performed and the thoracotomy was closed by layers. The cardiopulmonary bypass and cardiac arrest times were 73 and 56 minutes, respectively. The postoperative period was eventless with two days in the intensive care unit and hospital release on the 10th postoperative day.

VSA is a rare disease most frequently seen in Oriental individuals. The first case was reported in 1961 by Heiner et al. In this report, there was a fistula from the aorta to the left atrium, which was indistinguishable from the neck of the VSA [5]. Since then, several works have been published [6-8]. James et al. recently presented their 32-year experience from 1971 to 2003 involving 22 cases treated by surgery, of which 15 had associated lesions; six with interventricular septum defect, six with aortic insufficiency and three aortic coarctation [1].

In Brazilian publications, in 1990 Barbosa et al. published a case of a calcified VSA in an asymptomatic patient who underwent surgery on two occasions; the first by left thoracotomy and the second by longitudinal median transsternotomy [8]. Symptoms normally are related to associated heart defects and generally the patient evolves with dyspnea or congestive heart failure as in the current case. Apart from Doppler echocardiography, heart catheterism is definitive [7]. Treatment consists in resection of the aneurysm and closure of the aneurysmatic neck using a bovine pericardium patch with correction of associated lesions. In the majority of cases, approach and closure are achieved by aortotomy [1,3,6].

VSA is a rare disease mainly found at the left Valsalva sinus. In this case evolution was slow and associated with aortic valve insufficiency causing congestive heart failure. Due to the formation of a false aneurysm within the ventricular wall, the option was to approach the aneurysmatic orifice by a right transventricular approach. Bovine pericardium patches are ideal to close the aneurysmatic orifice. The decision to repair or replace the aortic valve depends on the valvar anatomy and the surgeon.
The patient in this case had a good evolution after surgery. Currently, with two years of follow up, the patient remains asymptomatic taking digitalis and a diuretic agent.

5. Heiner DC, Hara M, White HJ. Cardioaortic fistulas and aneurysms of Valsalva in infancy: a report of an aortic-left atrial communication indistinguishable from a ruptured aneurysm of the aortic sinus. Pediatrics. 1961;27(3):415-26.