Most mediastinal tumors are incidentally diagnosed because they are asymptomatic. The aim of this paper is to report on the case of a 29-year-old male patient, who had an increase in cardiac area after blunt thoracic trauma. He was submitted to thoracotomy when a large mediastinal mass was found. The histopathological diagnosis was a mature mediastinal teratoma.

Extragonadal germ cell tumors are rare, representing 2 to 10% of all germ cell tumors with 90% occurring in men [1]. In adults and adolescents the most frequent extragonadal site is the mediastinum (75% of cases), followed by of pineal gland and the sacral region. They are very occasionally found in the stomach, vagina, prostate gland and orbit (eye socket) [1].

Primary mediastinal germ cell tumors (MGCT) correspond to between 10 and 20% of mediastinal neoplasia, generally occurring in the anterior mediastinum (95%) and are related to malignant transformations of germinative cells, without evidence of any primary gonadal focus [2].

According to their morphologic characteristics, MGCT are classified as teratomas, seminomas, nonseminomatous and mixed germ cell tumors without teratomatous components [2].

About 36% of patients with mediastinal tumors are asymptomatic at the moment of diagnosis [3]. Consequently, these tumors tend to be diagnosed by chance during chest imaging. When symptoms are present, they may be due to compression, invasion of adjacent intrathoracic structures or associated to other syndromes. The most common clinical symptoms of MGCT include dyspnea (25%), thoracic pain (23%), coughing (17%), fever (13%), weight loss (11%), superior vena cava occlusion (6%) and extrathoracic pain (5%). Less common symptoms include a mass in the chest or cervical wall, hemoptysis, hoarseness, nausea and dysphagia [4].

Here we report on the case of a mature solid teratoma in the anterior mediastinum diagnosed after a car accident.

A 29-year-old, multiple-trauma male patient, victim of an automobile accident, was admitted into hospital in an unstable hemodynamical state. A chest radiography was requested which demonstrated mediastinal widening, suggestive of cardiac tamponade (Figure 1). As peritoneal lavage was negative, the patient was submitted initially to median thoracotomy, which exposed a large encapsulated mass in the anterior mediastinum (Figure 2), occupying almost all the chest cavity, with left and right pleural adherence. Additionally, adherences were identified on the innominate vein and right and left upper lung lobes, compressing the myocardium to the posterior region. The mass had a teratoma appearance, with hairs, epidermic tissue and bone but without active bleeding. 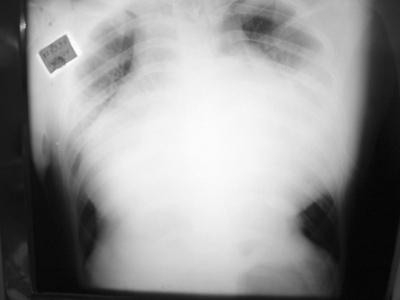 Fig. 1 - Chest radiography in the emergency department soon after admission 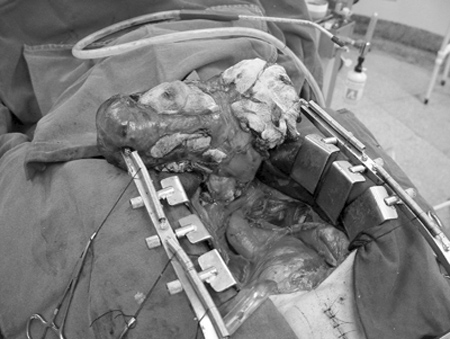 Total resection of the tumorous mass was achieved, with traces at the innominate vein and pulmonary fields. At macroscopic examination, the mass weighed 1327.0 g and measured 21.0 x 15.0 x 11.0 cm (Figure 3). At histopathological examination, a variegated aspect was seen, with areas of hair and bone material, compatible with a solid, mature teratoma but without signs of malignancy. In the immediate postoperative period, the patient was stable and was discharged from hospital for follow up in the outpatient clinic. 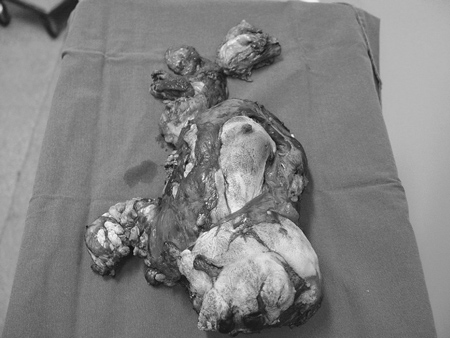 Fig. 3 - Final aspect of the mass after surgical resection

Mature teratomas are the most common type of MGCT, normally occurring in young adults (15 to 35 years). They are well-delimited by a fibrous wall that frequently adheres to surrounding structures and may become calcified [5].

Chest radiographies are almost always abnormal in cases of MGCT. Computed axial tomography of the chest with endovenous contrast is the first-line imaging method when confirmation is required [6].

Teratomas are treated first by surgery, with complete resection of these tumors providing a good prognosis; this is the only curative treatment. Resection is necessary because compression can involve adjacent tissues. Moreover, tumors in the mediastinum can become malignant. Thus, this procedure is indicated both in symptomatic patients and in those without any clinical manifestation [7]. Surgical resection of mature teratoma can be achieved by lateral thoracotomy or median sternotomy, depending on the size, of location of the tumor. When it involves intrathoracic structures, removal may be difficult [6]. In the case reported herein, adherence to almost all the mediastinum structures was evident and, by the size, the heart was compressed to the lower part of mediastinum.

In this patient, a victim of blunt chest trauma, chest radiography demonstrated mediastinal widening, suggestive of an intrapericardial injury. Complementary preoperative examinations (echocardiogram and computed tomography) were not performed, as this case was a multiple trauma accident victim who was unstable from the hemodynamic point of view. Due to the possibility of having injuries of other structures, an urgent median thoracotomy was indicated that could be extended to the side, if necessary. The surgical finding was this large tumor mass, which was almost totally resected. The patient, in this case, had a good evolution after surgery.