The case of a 47-day-old white male weighing 3695 g is reported. The child was prescribed furosemide, digoxin and captopril and referred to our service with a diagnosis of severe congenital heart disease. Since birth, he became tired during breastfeeding that evolved with tachydyspnea leading to hospitalization in the intensive care unit with a diagnosis of bronchopneumonia requiring mechanical ventilation. He was in a moderate general state, ruddy, hydrated and intubated. His thorax was symmetrical with ictus cordis palpable at the 4th left intercostal space. His heart rhythm was regular with two normal sounds and an ejective murmur +/6+ at the left sternal edge. Pulmonary auscultation identified bilateral coarse crackles. The abdomen was rounded; the liver was 4 cm from the right costal edge and there were fluid sounds. The pulses of the lower limbs were diminished; the arterial pressures of the arms were 130 x 50 mmHg and of the legs 40 x 20 mmHg. Oximetry of the pulse of the upper limbs was 90%.

An electrocardiogram showed a heart rate of 125 bpm, SÂP + 60º, PR interval of 0.16 s, QTc of 50 s, QRS of 0.08 s, with signs of left ventricular repolarization and right ventricular overload.

A radiogram demonstrated visceral situs solitus and a cardiothoracic ratio of 0.64 with prominence of the right chamber. The vascular network was increased and the diaphragm was free.

An echocardiogram identified aortic coarctation with important hemodynamic repercussions; a gradient of 80 mmHg was located after the emergence of the left subclavian artery with an internal diameter of 1.7 mm; the diameter of the aorta was 5.1 mm (Figure 1). There was slight aortic valvar stenosis with a peak pressure of 29 mmHg. The foramen ovale was patent. The infant had slight pulmonary artery hypertension with a systolic pressure of 43 mmHg. The arterial channel was closed and there was a small pulmonary-systemic shunt from the descending aorta to the pulmonary artery. 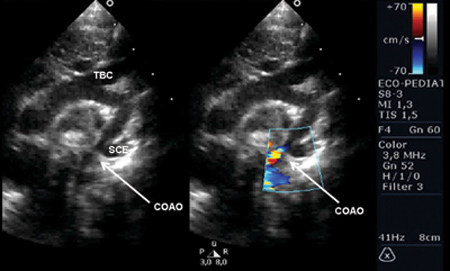 The clinical history and the physical examination were extremely suggestive of aortic coarctation which was confirmed by the echocardiographic findings that provided rich anatomical details. The clinical state and the start of organ failure stressed the urgency of the operation.

Left lateral-posterior thoracotomy was performed with extensive dissection of the aortic arch, subclavian artery and the descending aorta providing ample mobilization. The arterial channel was ligated and sectioned (Figure 2). Crosswise sectioning of the aorta was performed above and below the coarcted section, the subclavian artery was sectioned, a lengthwise incision was made in the anterior aortic wall and posterior subclavian artery wall, End-to-end anastomosis was performed of the posterior aortic wall (Figure 3) and final construction with the left subclavian artery in "roof", enlarging the anterior region in the resected region and maintaining the blood flow to the left upper limb [1,2]. All the anastomoses were achieved using absorbable 6-0 polydioxanone threads with the aorta remaining without flow for 37 minutes due to the little experience with the technique, however no neurological lesions were reported. An echocardiogram after 45 days demonstrated the treated region with a residual gradient of 22 mmHg but without clinical implications and the infant is being followed up with periodic examinations as the technique provides a high potential of growth of the tissues and a low probability of restenosis. 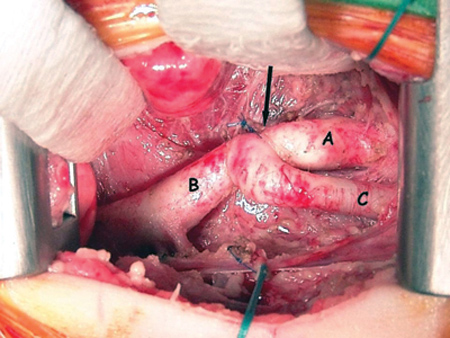 Fig. 2 - Initial aspect after dissection of the structures and ligation of the arterial channel. The coarcted region is indicated by the arrow; A: aortic arch; B: descending aorta; C: left subclavian artery 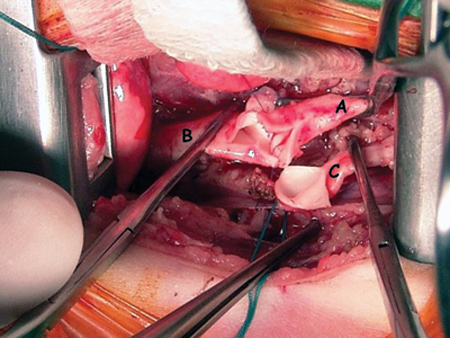 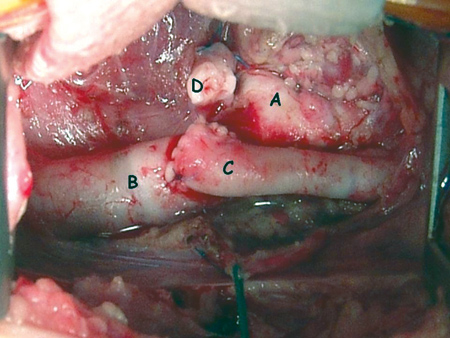