Introduction: Mediastinitis is one of the most feared complications for thoracic surgeons, being a significant factor in morbidity and mortality in thoracic surgery. Objective: To find a new alternative in order to prevent mediastinitis, reducing the morbidity and mortality. Methods: A retrospective study including 1020 patients operated between February 2002 and October 2005. Patients underwent bypass surgery and vancomycin paste was used rather than bone wax in all cases. Results: Patients were followed-up for 45 months; there were only five (0.49%) cases of mediastinitis; no deaths were observed. Conclusion: The use of Vancomycin paste to replace bone wax proved to be a great allied to prevent mediastinitis after thoracic surgery.

Mediastinitis is one of the most feared surgical complications faced by cardiovascular surgeons, being an aggravating factor in cases of morbidities and mortalities in cardiac surgery postoperative period. It affects 0.5% to 5.0% of the patients after a cardiac surgery [1,2]; it may come to affect 8% of the patients who underwent myocardial revascularization using both internal thoracic arteries [3].

The main signs and symptoms evidenced by mediastinitis are: fever, leukocytosis, surgical wound with the presence of hyperemia, pain, and drainage of purulent exudates. The diagnosis will be more accurate through radiographic testing, especially computed tomography with visualization of retrosternal fluid collection; however, the harvesting of the material through sternal puncture results in a definitive diagnosis [4,6].

The factor of greatest significance to the success of mediastinitis treatment is the early diagnosis and therapeutics [7]. Diagnosing the infectious process before patient discharge to establish an early and adequate therapy interferes decisively to infection control and decrease of death cases caused by mediastinitis [8].

In this way, the aim of this study was to use vancomycin paste on the sternum during surgical procedure in order to prevent mediastinitis targeting a better survival index in patients undergoing cardiac surgery.

This was a retrospective study with 1,020 adult patients who underwent surgery with cardiopulmonary bypass support at the Hospital dos Fornecedores de Cana Piracicaba Cardiac Surgery Service from February 2002 to October 2005.

Vancomycin paste was used in all the patients for sternum hemostasis and mediastinitis prophylaxis.

In view of the nature of the study, this method of homeostasis has already been used in other disciplines, such as orthopedics, informed consent from the patients or the next of kin was waived.

Thirty patients were excluded if the data were incomplete or due to death in the first five days postoperatively of noninfectious cause.

Patients' follow-up was performed throughout the hospitalizations days prior to surgery. A new visit to the outpatient clinic was scheduled 10 days after the patient discharge. Patients who presented any kind of complications, such as arrhythmia, pleural effusion, pneumonia, heart failure, blood pressure abnormalities, fever to be explained, inflammatory and/or infectious processes of sternotomy or saphenectomy scars, and other morbidities were followed-up for an indefinite length of time.

All patients were given cephaxolin, 1 g intravenous in the moment of anesthetic induction, and every 8 hours for 48 hours. Patients who presented infectious processes, such as pneumonia and urinary tract infection postoperatively received specific antibiotic treatment for a longer period.

The criteria used to establish the diagnosis of mediastinitis resulting from the signs and symptoms were the following: fever, hyperemia of the sternotomy scar, skin and subcutaneous tissue dehiscence, thoracic pain, sternal instability, presence of secretion in the surgical wound, leukocytosis, and worsening of the general health status. We considered that two or more of these signs are sufficient to make a diagnosis of the infectious process establishing in the median thoracotomy site and to institute an immediate treatment. Surgical wound infections successful treatment of sternotomy is related to the diagnosis and to the beginning of the treatment in the earliest phase as possible.

In the current study, we considered only the patients who presented infections affecting skin, subcutaneous tissue, sternum, and both superior and inferior mediastinum.

Antibiotic via intramuscular (vancomycin associated to imipenem) were administered to all patients; the patients were submitted to surgical treatment with cleaning of the infected site, sternal debridement, and Robicsek resuture of the sternum.

Use a stainless steel sink to make the preparation;

Vancomycin paste is prepared at the moment of sternotomy and should be applied immediately. 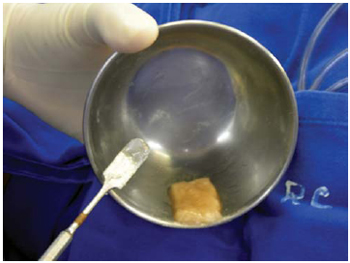 Patients who presented mediastinitis have been submitted to coronary artery bypass grafting using the left internal thoracic artery (LITA). Diabetes was the second most found risk factor. Four patients (80%) were diabetics and insulin-dependent.

On the average, we used three grafts per surgery; in one case a left ventricle aneurysm was repaired.

Patients, who developed mediastinitis, were treated with early surgical intervention, cleaning the infected site, sternal debridement, and Robicsek resuture of the sternum; suction drains were placed in the mediastinum and over the sternum.

Patients were treated with intravascular antibiotic (vancomycin associated with imipenem); this made possible the diagnosis of mediastinitis.

In the intraoperative period culture, Stafilococcus aureus was predominant in three patients (60%), Pseudomonas aeruginosa in one case (20%), and one culture (20%) was negative.

The greatest incidence of complications is from 10 to 20 day postoperatively. Complications affect mainly the patients who underwent coronary artery bypass grafting (50%), valve replacement (20%), aortic diseases (20%), and other surgeries (10%).

Despite affecting a small number of patients, mortality rate is high reaching as high as 47% [9].

Minimally invasive surgery and off-pump CABG are important factors in the decrease of mediastinitis events because both surgeries reduce surgical trauma and provide a faster patient recovery [10,11]. The use of more efficient antibiotics has also been described as an important factor to control mediastinitis. However, it is known that there is less systemic antibiotic penetration into the bone tissue [12,13].

Several prophylactic measures both in hospital and outpatient clinic period have also proven to be effective in controlling incisional infections: three baths with chlohexidine, an antiseptic/germicide/disinfectant, in the first 24 hours prior to surgery; access through the opening of gastric probe and the thermometer; replacement of PVPI by chlohexidine in the skin antisepsis (disinfection); tight glycemic control; use of based-antibiotic ointments over the incisions; early antibiotic therapy in cases of hyperemia and excretion, and a new consultation if early signs of infections are seen after patient discharge [14].

At the beginning of the study we have had difficulties to standardize the amount of vancomycin needed to recover both sternal margins and to determine the adequate moment to prepare the paste.

Moreover, we have also had difficulties to settle the amount of physiologic saline to give consistency to the paste. Reviewing the literature we have found an article in which a vial of vancomycin (500 mg) was dissolved in a 10 mL normal saline [15]. In our service, we used only 1 mL of normal saline to meet a pasty consistency, thus posing both bacteriostatic and hemostatic effect in the medullary portion of the sternum without antibiotic loss through mediastinal drains.

New alternatives are being searched in order to reduce the incidence of mediastinitis. Among them, the minimally invasive surgery is an option because it reduces hospital length of stay postoperatively. The use of a topical antibiotic, such as gentamicin-collagen under the sternum, which has been recommended by the Helsinki University Central Hospital Group, Helsinki, Finland, provided a reduction in the mediastinitis events [17].

A datum of great interest is to know whether the vancomycin in a topical dose of 1 mg is reaching systemic levels to avoid the development of the Stafilococcus aureus. We know that if the levels are not being reached, there will be a risk of bacterial resistance. The article published by the Journal of Cardiothoracic Surgery, on January 2003, reports that the use of vial of vancomycin (500 mg) dissolved in a 10 mL normal saline applied at the moment of sternotomy closure was not capable of reaching levels needed to avoid bacterial growth and would be potentializing the appearance of resistant Stafilococcus aureus [15].

Articles published to elsewhere have confirmed the efficacy of vancomycin as a bone infection prophylactic factor, especially when applied topically [18-20]. Studies have shown that the application of vancomycin associated to orthopedic cement used in hip prosthesis reduced the number of infections, and it was also important in the treatment of infected re-operations [21]. We have sought with this new method of homeostasis, to reduce the incidence of sternal infection once the bone wax, especially when applied abusively is one more factor to be summed up to infection arouse [22].

Bone wax has a hemostatic property which can lead to an important decrease of the vascularization of the sternum. Moreover, it is not easily absorbable by the organism, prolonging the bone ischemia over several days. These factors contribute in a negative way to bone consolidation.

Based on the low-infection rate presented by our patients, we believe that using the vancomycin paste we are avoiding one more risk factor, thus reducing the rate of mediastinitis in postoperative cardiac surgery patients.

In our Service, we have been using vancomycin rather bone wax since 2002. Our rate of mediastinal infection is nearly 0.49%. When comparing this rate with those found in the literature, we have come to a conclusion that the studied populations are similar, as well as the pre- and intraoperative factors for mediastinitis, and the sole differentiated factor is the use of vancomycin paste. This led us to believe that vancomycin paste in a dose of 1 g is effective in the prophylaxis of sternum infection and, consequently, of mediastinum infection.

We are beginning a new randomized study with a control group aiming at studying our local population in which we can analyze these data more clearly and to highlight the efficacy of the vancomycin paste for sternal hemostasis and mediastinitis prophylaxis with the main goal of giving cardiovascular surgeons a new hope in reducing the mortality and morbidity rates of particular cause, such as mediastinitis.

We are sure that only with the persistence in searching the scientific knowledge, the answer to the solution of this problematic experienced by all cardiovascular surgeons will be found.