OBJECTIVE: To describe our experience with repair of coarctation of the aorta in adults using left heart bypass.
METHODS: From November 2007 to October 2009, eight adult patients with coarctation of the aorta underwent surgical repair under circulatory support using a left atrium to femoral artery bypass circuit, with graft interposition tube through left posterolateral thoracotomy. Five patients were female, with mean age of 31.5 ± 13.1 years. All patients had hypertension and others associated cardiovascular diseases.
RESULTS: There were no deaths or neurological complications. The mean surgical time was 308 minutes with mean left heart bypass and distal aortic clamping time of 73 and 65 minutes respectively. Postoperative bleeding was 696 ml in average. Six patients developed severe hypertension postoperatively requiring intravenous vasodilators. The mean length of stay was 9 days. A significant reduction of gradient blood pressure occurred. Echocardiographic follow-up up to two months postoperatively showed mean aortic / graft gradient of 20.3 mmHg.
CONCLUSION: In this series the use of left heart bypass showed to be a safe option in the surgical correction of coarctation of the aorta in adults, especially in patients with abnormal aortic wall. There was no spinal cord ischemia in the cases studied.

CA: coarctation of the aorta

The coarctation of the congenital aorta (CoA) is a disease whose natural history was significantly altered by surgical correction in childhood [1], providing significant improvement in the expectation and quality of life of patients [2]. In addition to congenital coarctation, inflammatory diseases such as Takayasu's arteritis (or reversed coarctation) are important causes of aortic stenosis [3]. Several surgical techniques have been used, but they have limitations and specific applications [2].

The correction in adulthood has peculiarities, mainly due to the presence of comorbidities such as systemic arterial hypertension (SAH), severe calcification of the stenosed area and proximity, changes in the aortic wall [1,4], and other associated heart diseases (patent ductus arteriosus, ventricular septal defect, aortic valve changes and others) [5]. The risk of paraplegia is significantly higher in adolescents, adults and recoarctations, with an incidence of 2.6% [6], especially when the collateral circulation is poor. The use of extracorporeal circulation (CPB) for correction of aortic coarctation can help maintain spinal cord perfusion during aortic clamping [7]. Thus, this study aims to describe the experience with the surgical correction of aortic coarctation in adult patients using extracorporeal circulatory assistance through circuit between the left atrium and femoral artery.

Eight adult patients aged between 23 and 62 years were operated from November 2007 to October 2009, (mean 31.5 ± 13.1 years), in which 5 of them were female. Six patients had echocardiographic and angiographic diagnosis of aortic coarctation, generating pressure gradient (mean 71.5 ± 20.7 mmHg) and two had total disruption of the thoracic aorta to the level of the stenosed area. All patients had hypertension and were in regular use of antihypertensive medications. One patient had left ventricular dysfunction (according to guidelines of heart failure) [8]. Some patients had associated cardiovascular diseases (aneurysm of the aorta, bicuspid aortic valve without dysfunction, pulmonary hypertension, patent ductus arteriosus, subaortic stenosis, Takayasu's arteritis). One patient was diabetic.

The study was descriptive, with all cases operated at Presidente Dutra University Hospital (São Luis, Maranhao, Brazil), being authorized by the Research Ethics Committee, without identification of the patients studied and no attitudes concerning the authors that were characterized as conflict of interest.

Data were analyzed using the software BioEstat ® 5.0 by calculating the mean and standard deviation. The systolic and diastolic blood pressures and systolic gradients throught the coarctation before and after correction were compared using the paired Student's t-Test, in which P value was considered significant when less than 0.05.

We used the same surgical procedure in all cases, with the patient under general anesthesia using a selective double lumen cannula in the airway and exposure of the left inguinal region. We performed a left posterolateral thoracotomy at the fourth intercostal space. The aortic arch, left subclavian artery, the area of coarctation and the descending aorta were carefully dissected and mobilized, as well as the isolation of adjacent lumbar branches and exposure of the left femoral artery. The pericardiotomy was performed through a parallel incision to the phrenic nerve. Heparin was administered systemically (4 mg / kg) followed by cannulation of the left auricle (Figure 1) and the left femoral artery (Figure 2). Left circulatory assistance was initiated maintaining the blood supply to the descending aorta through the left femoral artery using a peristaltic pump without the use of a membrane oxygenator. The aorta was clamped at first in conjunction with the proximal left subclavian artery and then the distal portion of the defect. The ventilation was selectively maintained during blood deviation. During the procedure, blood pressure was maintained without difficulty on the average of 60 mmHg by restricting the drained blood (partial drainagel) of the left atrium. The flow of the roller pump was maintained according to the pre-pressure monitoring cannula in the femoral artery above 50 mmHg. The temperature was maintained during surgery around 36.0 º C. The segment was replaced by Dacron tube (16 mm to 18 mm) ranging from 6 cm to 10 cm long, sutured with a 4.0 polypropylene wire, and the use of hemostatic biological glue in some cases (Fig. 3). We tried to preserve, wherever possible, the branches that irrigated the spinal cord. We conducted distal and proximal declamping and removal of the atrial and femoral cannulae, followed by heparin reversal. 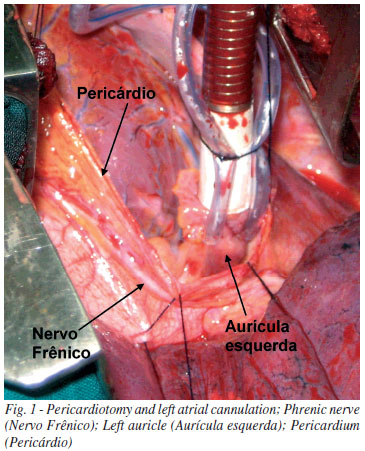 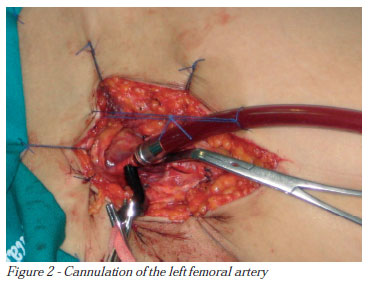 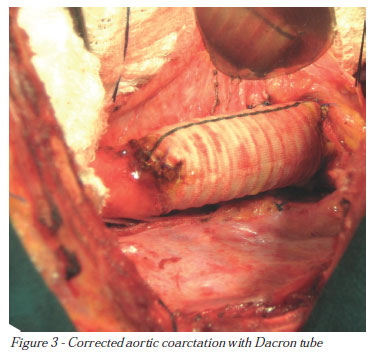 Table 2 shows the main variables in the surgical repair of aortic coarctation. The average time of surgery was 308 ± 39.7 minutes, the mean circulatory assistance of 73 ± 15.5 minutes and aortic cross-clamping was 65 ± 14.1 minutes. They were discharged from the ICU between the 2nd and 3rd postoperative day, with six patients who develop severe systemic arterial hypertension, necessitating the use of intravenous vasodilators. There were no deaths or neurological complications. One patient had transient hoarseness.

The hospital discharges occurred between the 4th and 26th postoperative days, with an average of 9 ± 7.0 days.

Only one patient had their hospital stay after surgery due to increased bacteremia and made use of intravenous antibiotics.

The follow-up period with echocardiography performed up to the 2nd postoperative month showed good surgical results in all cases, only two patients with aortic / graft gradient greater than 30 mmHg (mean = 20.3 ± 9.3 mmHg) (Figure 4). A patient with chronic pain in the wound was referred to outpatient clinic specialized in pain. 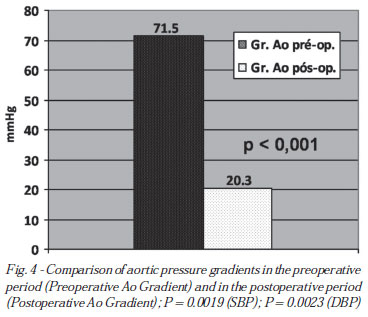 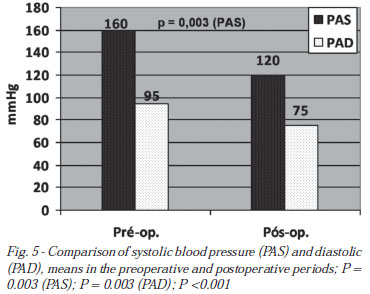 Aortic coarctation is a congenital malformation that can lead to premature death if not treated without correction, with 50% mortality without treatment at the age of 30 years, 75% at 46 years and 90% at 58 years [9]. Inflammatory diseases such as Takayasu's arteritis (reversed coarctation) also involve the aorta and its branches, which may lead to stenosis or obstruction [10]. Surgery in older patients differs from the standard repair of coarctation in children, mainly due to severe calcification of the distal aortic arch and left subclavian artery [4].

Paraplegia is a devastating complication after the correction of the aortic coarctation, with an overall incidence of 0.3% to 1.5%. The prevention of paraplegia should always be decisive in the mind of the surgeon every time the surgery is performed, especially in adult patients [11], which the incidence of paraplegia almost doubles [6]. The lack of development of collaterals that provide an adequate supply to the spinal cord can be determined by clinical circumstances as: primary mild aortic coarctation, recurrent coarctation after surgery (with or without aneurysm), origin of the distal subclavian artery to the coarctation and coarctation after inadequate balloon dilation or stent placement by interventional [12].

Several techniques of circulatory deviations have been employed during surgical procedures on the thoracoabdominal aorta over the years in an effort to prevent distal ischemia of the spinal cord [13]. Studies have shown benefits in spinal cord protection in surgery of temporary interruption of the aortic blood flow when the circulatory assistance is installed [12.14]. In our series, there were no neurological complications, despite the limited sample.

The aortic coarctation present until adulthood is uncommon, being observed by Bouchart et al. [9] annual average of 1.75 adult patients operated in 20 years, being more prevalent in males (2 to 3:1) [15]. Wong et al. [6], between 1997 and 2000, underwent correction of nine cases of aortic coarctation using extracorporeal circulation, but only 3 patients were 18 years old or more. In our series, there was a greater female predominance and the presence of eight cases of coarctation in adults over a period of two years can be explained by the difficulty of early diagnosis in the region.

Carr et al. [17], assessing the correction of aortic coarctation in 45 adolescents and young adults, reported a mean operative time of 3.8 ± 0.7 hours (228 min) and average clamping time of 31 ± 15 min, and in five patients of his series, extracorporeal circulation was used. The increased surgery duration in the study presented was mainly due to the time of preparation for circulatory support and technical difficulties, arising especially from the aortic wall calcifications, and presence of large collateral circulation, mobilizing more time consuming areas of aneurysmal inflammatory adhesions, besides corrections of bleeding in the suture.

Von Oppell et al. [18] published a meta-analysis of spinal cord protection in patients with acute traumatic aortic transection, a situation where adequate collateral circulation to the spinal cord is often insufficient. These authors demonstrated that: simple aortic clamping and clamping time longer than 30 minutes were associated with increased risk of paraplegia and left extracorporeal circulatory support provided greater protection of the spine when compared to techniques of passive perfusion.

In aortic coarctation, the previous evidence or unknown risk of spinal cord ischemia encourage the surgeon to minimize the time of spinal cord ischemia [19], especially in cases of the techniques without the use of active perfusion. In the group of Wong et al. [6], the three patients who were operated with ECC had clamping time from 35 to 49 min. In our study, the clamping time was longer, but a similar study using extraanatomic technique with conventional ECC [20]. Another benefit noted was the well-being provided in the correction of aortic surgical complications, because the surgeon has the concept that distal perfusion may help to minimize the time of spinal cord ischemia. The SAH, even in the corrected aortic coarctation, is the most frequent cause of morbidity and mortality with advancing age [9]. The series studied always showed reduction in blood pressure in the postoperative period, with most patients requiring the use of antihypertensive drugs [4,9,17]. In the group evaluated, there were a significant reduction (P <0.05) of systolic and diastolic blood pressures, with all patients using antihypertensive drugs at hospital discharge and in a short-term follow-up period.

Surgical correction of aortic coarctation in adults with use of extracorporeal circulatory support in the left atrium and femoral artery may be an option in the prevention of spinal cord ischemia, especially in cases with need for longer aortic clamping time, as patients with abnormal aortic wall or cardiovascular associated diseases, showing minimum rates of complications. However, the main disadvantage was the time of surgery greater than in other techniques without extracorporeal circulation, in addition to the disadvantages of the installation of extracorporeal circuit, which is well established in literature. A multicenter study is necessary to evaluate real advantages of circulatory assistance in the prevention of paraplegia in aortic coarctation in adults, since its incidence is low.